Hello all. just joined as I have just purchased a Series 2 FHC. awaiting delivery from Beverly Hills.

I will have a selection of queries / questions in due course.

Hi Bill..welcom to the forum...lots of help available and plenty of info here...get to know the knowledge base section...and get yourself a proper Jaguar service manual.....all the best.. Steve
Steve
1969 S2 2+2 & Building a C type replica
Show post links
Top

Welcome Bill, as Steve says there's lots of help on here, already answered by searching or post your questions and you'll get responses to help. Good luck and keep us posted.

Welcome. Have you already inspected the car or is it sight unseen? Either way here is hoping it exceeds your expectations. Purchasing an e-type is always exciting
Geoff Allam
67 series1 ots under restoration
64 series 1 fhc burning lots of oil
53 xk 120 fhc sitting in garage waiting for attention
Show post links
Top

Bill,
If you are refering to Beverly Hill Car Club, then mine came from there four years ago and I was very pleased with it.
Good luck with the purchase
Mike,
1970 S2 FHC 2R28165
Show post links
Top

I have heard various reports of the BHHC.

My own experience has been OK.

Maybe I was lucky though!

I suppose it is difficult for them because they sell project cars and you never know what you are going to get until you pull the filler out. I suspect some customers have received more filler than anyone bargained for.

I like the use of photos but the descriptions can be a bit terse.
Last edited by politeperson on Mon Jun 04, 2018 4:07 pm, edited 1 time in total.
James

I did have a look at a couple of cars there and got independent assessments done on them. Apparently the guys at BHCC are a bit chaotic in that they are kept extremely busy the whole time and the assessor was left standing a while even though he had booked an appointment and the inspection ramps.

I ended up walking away from those particular cars, but as always when buying from afar, try get a local assessor in. The rest of my experience with them was positive, friendly and helpful.
-Mark

Yes I have purchased from Beverly Hills Car Club.
Absolutely dreadful experience / ordeal.!
Briefly; saw the car on their website. I acknowledged that it needs work. had the car checked by one of their approved inspectors. Paid the agreed price in full.
THEN; On collection by a reputable and recommended shipper a detailed inspection with photos undertaken. Righfully so. when I saw the inspection schedule; numerous scratches, body trim missing, badge missing, spare tyre and wheel missing. to top it no key issued! the salesman said car comes with no key!. [no mention of this previously]. absolutely ridiculous and stressful. After numerous e-mails [Copying in the Manager and the Owner] the missing parts eventually delivered and then threats of legal action that they reluctantly provided a key. Scratches yet to be resolved and additional storage cost yet to be sorted.. by whom?
I wonder what else m,ight be missing when I receive it...
Would I recommend them? NO.
S2, 2+2, 1969
Show post links
Top

When do you think it is going to arrive then?
James

delivery to my door in about 4 to 5 weeks time.

As part of my proposed refurb process I aim to keep everything as original as possible but to include for some sensible upgrades listed as follows.[open to fellow members views/recommendations on these and any additional upgrades.]

Welcome Bill,
My S1 came from BHCC too, but there was one owner in between so did not deal with them directly.
Excitement will begin shortly, once you have the car in your garage.
What is the colour combo?
Good luck in your project

pearlescent Blue exterior.
Grey interior [not too worn] reminds me of a fine old leather armchair!

I suppose you will have to see what your starting point is when it arrives. I decided to do all the consumables and rubber bits in one go and the car has been fine for the last 2 years.

Thats what I did, I also converted it to RHD then added fuel injection and a big valve head.

Having said that, keep as much of the original stuff as is sensible, as often reproduction bits are not as good. Even the nuts and bolts.

You will need to do your headlights as a minimum for the MOT! Maybe a fog light or 2 as well.

A good local garage would get it on the ramps and be able to identify safety issues pretty quickly I would hope. Make sure they know where to support it (in front of the trailing arms at the rear and the rear wishbone arm mount at the front. On pads or better still wooden blocks.

Fingers crossed you will have no rust issues. Everything else is easy in comparison! Fixing rust properly on an E type takes months and costs a fortune. All the other mechanical things can be tackled in sections and you are living in the correct country to get hold of the bit easily enough.

As they are good as standard, I suppose reliability and safety would be my main concern, as I would hate to be left on the hard shoulder of the M25 or catch fire! You want to be able to use it without having to worry too much.

On the assumption your engine, gearbox and rear axle just need servicing. I would consider

Cooling system
Fossway Otter Switch, pressure test the radiator by removing is and giving it to a local radiator repair company, new hoses, clips, thermostat and possibly do the dreaded heater pipes (in the bulkhead). Make sure both fans work, otherwise the working fan tends to pull air past the one thats not spinning, by passing the radiator.! It may be worth back flushing the block if it if full of sludge, as seems to happen to neglected Jaguar engines. Check the water pump for circulation. My 69 US car had NO IMPELLER.

Electrics
Battery terminals, check change. Fuse boxes and fuses change all of them. Even when they look ok superficially they often dont allow the passage of electricity. Check the loom thoroughly looking for exposed wires and potential shorts. It is a simple loom and nearly all is visible. I would get a mobile electrician in to do it. You dont want the whole shebang going up in smoke on its first outing. Consider replacing the Lucus 6RA relays for new ones. Check the voltage regulator.

Fuel System
Fuel pump, inspect at least. Shouldn't be too noisy, relatively cheap to replace and easy.Fuel lines as well of curse and fuel additives can destroy old rubber fuel lines. Boom. Have a good sniff around the fuel tank. Can you small fumes. New ones are £450 but old ones can be patched for £60 and tested. I find they can corrode though in the corner of the boot near the rear light. The place where you cannot see the rust! At least unscrew the fuel tank sump so you can see how much rust is in the tank. Consider a fuel filter definitely, i prefer them to be fitted before the fuel pump as opposed to boiling away in the engine bay for safety.

Carbs
I assume you are on Strombergs. For cost reasons, i might just get them rebuilt. They are not a bad carb and performance can be brought up to almost SU levels by a small alteration to the secondary butterflys. This is well documented. Wonder if you have 8:1 or 9:1 engine?

Suspension
You might well end up changing loads of bushes and shocks, you will just have to see how worn out is. It is all pretty easy and readily available. I would keep the standard soft rubber, apart from the steering rack mounts where I found the polybush ones gave better feel (done when the radiator is out).

Wheels and Tyres.
Again, you will need to inspect for safety and the age of the tyres. Dont go oversize on the tyre width. If you end up replacing the whole lot you are looking at £2k. I like center-laced wheels and the tallest (not widest) tyre like 185 Blockeys. l like SWS and Longstone but loads of options and info on this forum.

Brakes
I dropped the rear IRS to do the rear brakes. The last thing you want is the rear calipers grabbing on and getting hot. I took mine off and sent them to Past Times for reconditioning. While it is out you might inspect the cage rubbers, oil seals and the diff ratio (3.51:1 Powerlocker on a US car?).

I find the standard brakes very good, the car stands on its nose, even compared to a modern. However, I did replace the whole system including masters and valves and the clutch hydraulics.

So, in summary, it is a bottomless pit!

As for the brake calipers, yes, the standard set up is more than good enough.

The same calipers were fitted to several models including the 420 and, I believe, the early XJ's so you stand a good chance of finding some replacements.

thanks enormously for the advice and recommendations.
I will look into each aspect mentioned in detail as soon as the car arrives in the UK.

At present I am aware the jack and associated tools are missing. best place to source these?

Other than that you can assemble a set of tools individually from eBay using the parts manual as a guide. The 1968 US cars did not have a toolkit/roll as standard but they did have a jack, Thor hammer, special socket to remove Federal spinners, spark plug spanner/tommy bar and spare fan belt. However as you will probably want to replace the Federal spinners with the UK style earned ones you are not going to need the socket. Cars fitted with disc wheels rather than spoked did not get the hammer but did receive the lug nut wrench and special tool for removing the chrome covers. 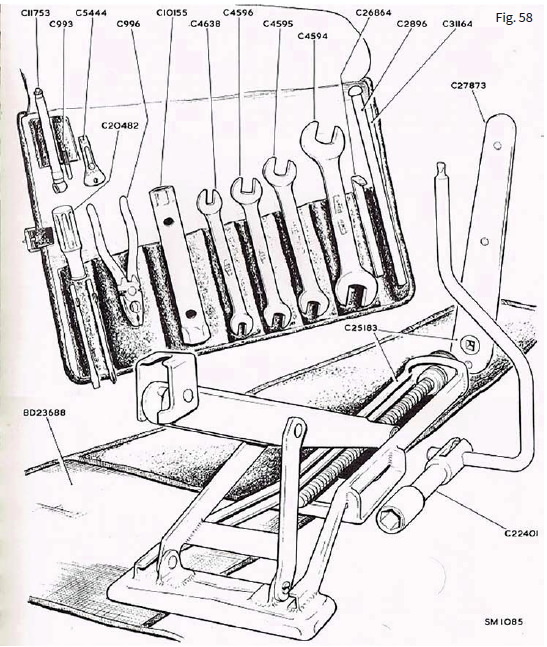 If you are not bothered about originality buy a tool roll bag from SNGB and fill it with appropriate modern tools and a set of hex sockets. Certainly more useful than the original tools which are more or less decorative nowadays. You can buy a Porsche 944 turbo scissor jack off eBay for about £50 and it works perfectly after a bit of filing of the locating head to fit the jacking shoe on the body. Modern bottle jacks will not fit under an E-Type with a puncture.

This is the one you need: 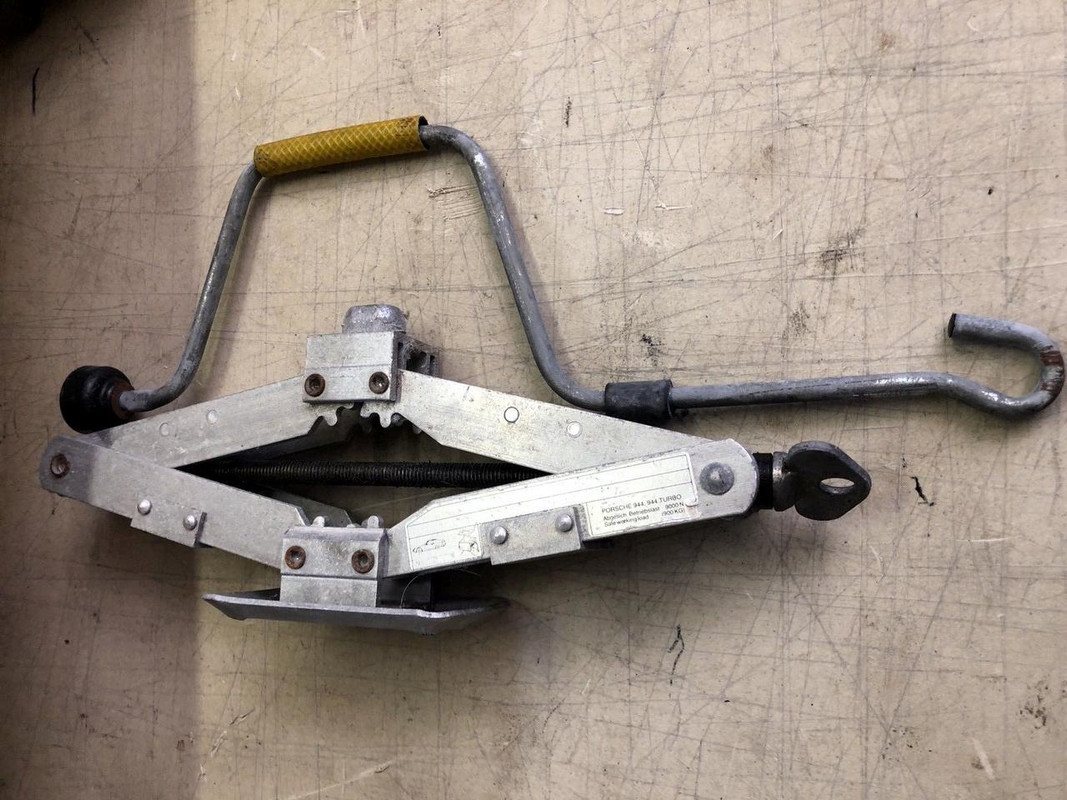