I would like to introduce myself today. I am quite a big car enthusiast and for many years I have been buying and rebuilding several cars, for daily use and for the pleasure of seeing them from time to time, sitting in the garage when the work to do is bigger than I had previously planned (e g the first car I bought, a very beautiful white series 2 XJ6 that 15 years later isn't finished...) . Concerning the e type, it's very strange, but as you really don't see a real one very often, and as I had been a little bit disapointed by the xj with which I was really struggling because in those time my equipment wasn't as good as now, i had never considered owning one. Moreover, it's absolutely not a car from my generation, as I just turned 40. But a few years ago I saw a couple of really well equipped series 2 at the rallye monte carlo historical. They were red and looked so good , so out of time, that even in the middle of this incredible car park , surrounded by all those fantastic race cars , I couldn't find a more beautiful car to look at. I was yet convinced that the XK engine is a masterpiece, as I am also so the owner of a very nice XJC ( from 76 I think...) and you can imagine the rest of the story. I put a photograph of a white FHC from ecurie europe , with blue stripes on it on the desk of my computer , gone to the goodwood revival , and little by little, I realised that this fantastic car ticked all the boxes and that it would be so great to add it to my collection . But it had still rise up in price and as we certainly all do, I was one more time checking on the web that it was out of reach when one came out of the blue: a series one convertible from 1962, in opalescent golden sand, coming from a well known dealership in Beverly Hills. Not in concourse condition, of course, but complete and by having spent it's whole life in california, with very very few rust. The car was sold as a project, but seeing the photographs, I was convinced that there was a complete restoration to do, but with very little bodywork to fix. It was to be imported by a french company I had never heard of, but on this saturday afternoon, I said to myself, well you work real hard, it's time to do something a little bit crazy! I phoned a very charming man who had the good idea to buy in the usa and sell in France those gems that we exported from europe several decades ago, porsche, triumph, healey etc... The car was in the boat, and several people had taken appointments to see it in flesh when it would arrive, several weeks later. What could I do ? I thought about it for about an hour and called the man back to make a bank transfer . Several long weeks after,checking from time to time where the boat was on the web, it was delivered a few miles from home. A man got it down a big truck and after I got down of my cloud I finally could get my e type home on my trailer! It was raining a lot, and as I had not finished to put the rear axle from the white xj6 on the car, I had to let the poor e type under a cover , under the rain. No need to say that the next week end, I worked hard with the spanners to get the xj6 out and the e type in ! I then dismantled it completely, seeing that the engine was seized, but that I had had a good feeling concerning the rust. There is some down the battery , in the back of the boot and on the left hand floor and that's it ! So far, no bad surprise. And as part of my pleasure is to do most of the job myself, I enjoy every part of the process. As my wife said, "don't hurry too much doing the restoration ! " I think she is a little bit worried about what could come next... This car is a real pleasure to work on, as I don't have to struggle on every nut being pretty much rust free.
So I am a happy man , and having integrated the e type club and received my first issue of the magazine, I am now aware that there is a lot to enjoy actually driving the car !
Well , I recon it's a long introduction, but I personally like the stories behind the projects, so I decided to share mine! 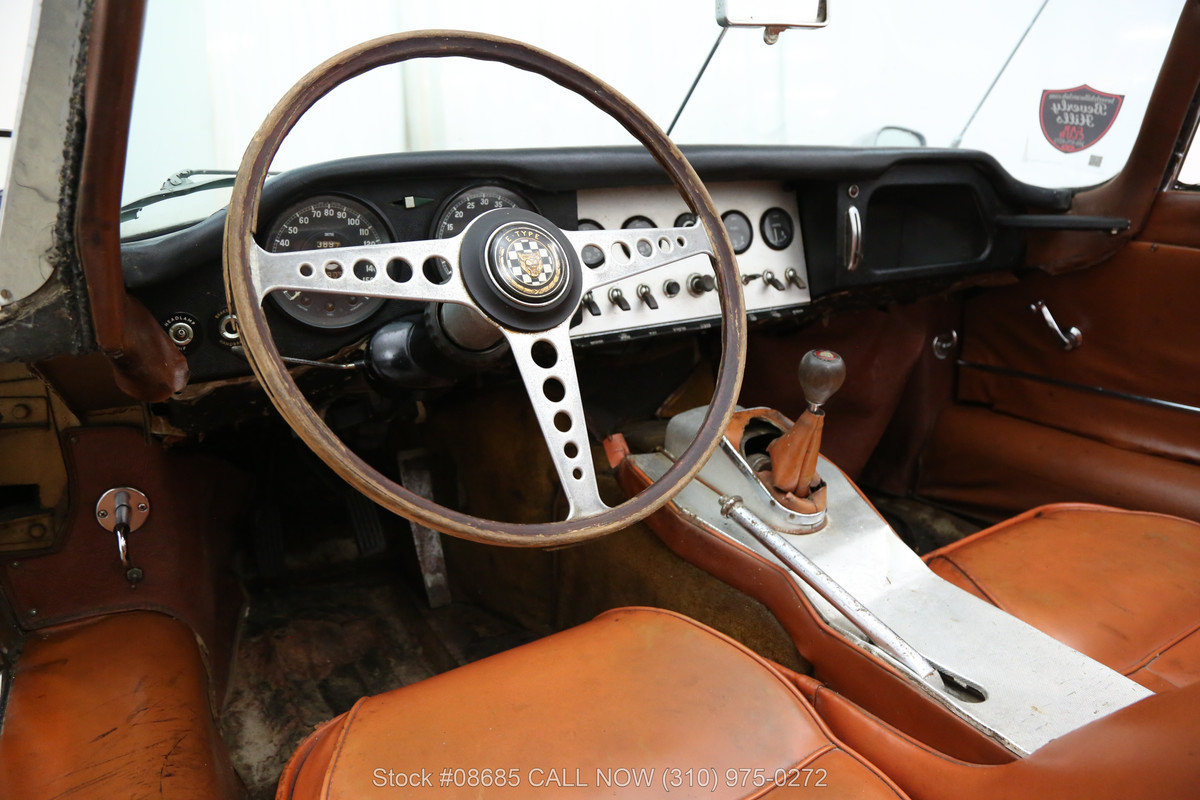 Hi Chris..welcom to the forum...you have a great project there in a fantastic colour combination...im sure you will find lots of usefull information here.....Steve
Steve
1969 S2 2+2 & Building a C type replica
Show post links
Top

Welcome to the Forum!

I think the OTS restored by Ian and his son was the same colour combination as your car. Full restoration thread here: viewtopic.php?f=8&t=5523

Please feel free to start your own restoration thread so we can all enjoy the journey and help where we can
David Jones
S1 OTS OSB; S1 FHC ODB

Welcome Chris
Hope you get to keep the interior, that would be a great result..!
Best
Jonathan
1963 3.8 FHC in slow restoration mode
1974 2.7 Carrera now as an RS Touring
Show post links
Top

Thank you for your welcome !

I will consider opening a restoration thread.

I must read the restoration thread you mentioned Heuer, it looks like they have made a great job.
Opalescent golden sand OTS 1962 LHD
Show post links
Top

Welcome Chris, nice story and a great project ahead.
Where in France are you located? There might some fellows close by to assist if needed.
Good luck and keep us posted on progress.
Ralph
'69 OTS + '62 OTS - Belgium
Show post links
Top

I am in the south west of France, near Périgueux, and we have quite a few people from belgium around .

I will put my location on the map, that's always a good idea .

It sounds excellent. It will be a fantastic car to own and a superb investment.

If it is rust free you should get it completed pretty quickly (1 year?).

I had rust on the battery tray too. I unbolted it and replaced it with a new battery tray! Took about half an hour and cost about £90 I think. I had no rust on the sills.

You should be rebuilding it very shortly I would hope, so get all those sub assemblies sent out now. Engine gearbox, axle, seats (if required).

I would keep the S1 bonnet.

Dont throw out of the old parts away when you take them off. They are often of superior quality to the reproductions and can be repaired.

Buying imperial nuts and bolts is not easy in France. Use these guys for nuts and bolts. Re-use the originals if you can, they are generally high quality. I spent £100 on and few boxes and they speed the job up no end.

Also I am skeptical about acid dipping body shells at the moment and shot blasting too - on old original cars. I might just consider removing the paint with plastic paint stripping discs, get it painted after the repairs then fill the box sections up with wax. It is much gentler on the shell and I am sure the finished car will last longer!

If you are unsure about anything, make sure you ask the Forum. They know everything.

And they all would like to go to Perigueux too.

If you get really stuck let me know. I have a local engine builder and a house in Objat (Near Brive), so big heavy lumps can be moved around if you want. He does Gearboxes and differentials too. I drive to your area regularly.

If your block and head are OK it will be about £5,000 to rebuild the engine I would guess, the parts being £3,000 ish for new internals (going on me recent experiences.)
James

thank you for your kind reply,

I am also convinced that refurbishing old parts can be the way to go.

At the beginning of the restoration project, it wasn't so easy to know exactly what to do , because I have several cars and, even if none of them is in concourse condition ( and some are very far from it ! ) I like their patina , the smell, the story they tell with their condition. But the E is a little bit apart from those cars. I have seen a few in really tip top condition and I must admit that they make great impression. So this is the way I go. It will be a nut and bolt restoration , as I think most people have to do, the cars being more than 50 years old now. Moreover, I want my wife to enjoy the ride in it and not telling me one more time " well, this one is a nice car but...smells a little bit like petrol, isn't as shiny as it could, has got heavy steering, clutch etc...!


I didn't understood what you meant by "keeping the S1 bonnet " May be you suggest that I shouldn't dismantle it? I thought about it, because it must be a pain to make all those diferent bits fit together perfectly...

I have planned to have the whole car media blasted. It's a technique that uses a powder made from olive stone rather than the traditional stainless steel powder. It's very soft. And the guy told me that once he has worked on a Ferrari, so when someone tells you this, you must trust him ! Just hope he didn't ruin the ferrari...

The engine is in the hands of someone I trust, because he did very well with my lancia fulvia engine.

Concerning the gearbox, having failed to find a specialist, I have planned to check visualy inside first, and maybe put it back .

I think it can go quite fast for the whole project, but the friend that will do the bodywork and paintwork will start on the beginning of 2019.

Thank you again for all your good inputs on the project.

I hope we'll meet up one day.

Hello Chris, nice region where you are located, + excellent food + wine too!
I have been several times nearby Souillac-Sarlat, my in-laws had a large property on a hill with impressive landscape and wildlife. This heritage was sold lately unfortunately...
Enjoy the project and do not hesitate to ask as many questions as needed.
Ralph
'69 OTS + '62 OTS - Belgium
Show post links
Top

Sorry, thought you had a later car with an earlier bonnet.

Definitely dont throw your bonnet away!

Sounds like your media blasting is a good idea.

Hi,
Great project. I’m currently at the end of a similar restoration of an OGS 3.8 fhc, incl a lhd to rhd conversion and rear axle ratio change from 3.54 to 3.07.
I’m writing this from Creysse, in the Perigueux region!
On holiday, sadly not living here!
Richard

The very first thing I would do is buy yourself a small borescope which will attach to a laptop computer, and examine all the hollow spaces, particularly in the bulkhead and sills , to see what the condition is like . I don't want to sound pessimistic, but Californian cars can be just as susceptible to rust as those from other areas if they have lived on the Pacific coast , and you need to know precisely the condition of the areas which you cannot see, before you start work on the shell . The existing rust , whilst not apparently serious, may be something of a warning
Show post links
Top

I guess you found the best car to drive around in the Dordogneshire !

The sooner the better I imagine. Nice restoration project.