I am in the process of installing a Monocoque covered headlight system in my 69. Chuck provides a nice replacement kit which includes new diaphragms. I have discovered that the original (and the replacement) diaphragms don't fit snuggly against the bonnet and fenders even with the little flanges that are attached to it. I obviously have to fill in some seams and even holes. 3M 4200 sealant was suggested but this seems to be difficult and expensive to find. I was wondering if anyone has found a nice sealer that holds well but that remains flexible. Auto parts stores sell a variety of black silicone based sealers and that seems like an obvious choice but I might be missing something. Any thoughts?
I have attached a picture that shows the old "goop" that was used to plug the gaps around the diaphragm.

#2 Re: adhesive advice for diaphragms that hold headlights

I originally used Sikaflex, but one diaphragm would repeatedly let go after a few months of driving. (Actually, the glue is holding the diaphragm BRACKET to the bonnet, not the diaphragm itself.)

A couple of months ago i was in there doing some headlight work, and decided to try something different. I used Gorilla glue, which is a water-activated urethane. It REALLY holds, is waterproof and exhibits a little flexibility. I have used it on other projects with excellent results.

Its been on the E type since May with no signs of letting go. I drive it a lot, so its getting a good test. Ill let you know if it ever lets go! 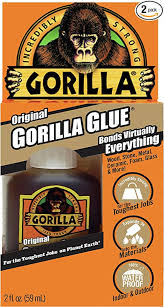 #3 Re: adhesive advice for diaphragms that hold headlights

Interesting approach. May give it a try.
Show post links
Top

#4 Re: adhesive advice for diaphragms that hold headlights

I originally used Sikaflex, but one diaphragm would repeatedly let go after a few months of driving.

Hello Bob,
Is the Sikaflex product you used the 221 version that most recommend for E Type Bonnet assembly? If yes, 221 is a general purpose bonding agent in the Sikaflex range and is not the product of choice for bonding panels in the Crash Repair industry. In fact, 221 is not included by Sika in the Sika product list for use in Auto Industry.

I stopped using it a long time ago in E Type restoration, when I observed issues of it letting go and now use Sika Power 4720, which is the product most recommended for the purpose of bonding body panels.

#5 Re: adhesive advice for diaphragms that hold headlights

Hello Bob,
Is the Sikaflex product you used the 221 version that most recommend for E Type Bonnet assembly?

I don't recall, I can only say with certainty that what I am using now seems to be working so far.
Bob t