I have search extensively for a definitive view of whether tap, distilled or de-ioned water should be used in a 50/50 mix with 2 year blue coolant. On the web I have found a warning that distilled or de-ionised water will react with the ions in metal and so cause damage. Most other general web opinions are in favour of distilled. A search of this forum reveals many recommendations to use distilled but no debate on which is best. Has anyone got a view on this before I flush and refill my Series 2 OTS. Any views welcome thanks.
Show post links
Top

The purer the water you use the less potential contaminants you introduce. Having said that, I just use tap water.

Deionised water is about as neutral and benign as you can get, as is distilled water. They are both electrically non-conductive, which helps under the bonnet.

One day I'm going to make my own water distiller. Or you can buy them for not a lot of money.

I always use distilled water and you can buy it in 5 litre containers from your supermarket for not a lot.
My theory is that you use distilled water in a steam iron to avoid build up of limescale and clogging the iron up, surely a similar theory should apply on a car radiator and will help keep waterways clear of any build up. Of course using a 50% mix of bluecol is essential.
Just my thoughts.
Mike
1973 Series 3 OTS Signal Red
Show post links
Top

Those of you who use a dehumidifier have a ready source of "distilled" water. I bottle mine and use it for radiators and washer bottles.

Using tap water depends on how hard your local water supply is, all the water companies publish how hard their water is.
John

Distilled water in an iron works with some but our last one would spit out crud periodically.

The latest one says "Do not use distilled water, it mucks up the cleaning process" - or some such IIRC
Jerome Lunt
1970 S2 FHC - Dark Blue, Red Interior, MX5 Seats
Show post links
Top

Here is what i do with a deshumidifier in the garage :
It keeps the air in a +- a 50, 60% humidity ( dépends of the season of course) it works at night for 7 hours a day and the distilled water is used for sterilisator at work or ironing at home and when i hace too much water i have plugged a hose to the garden 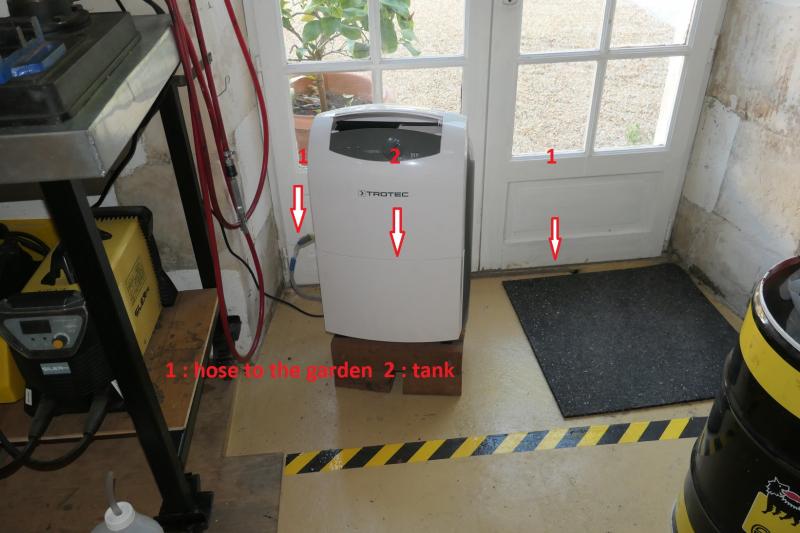 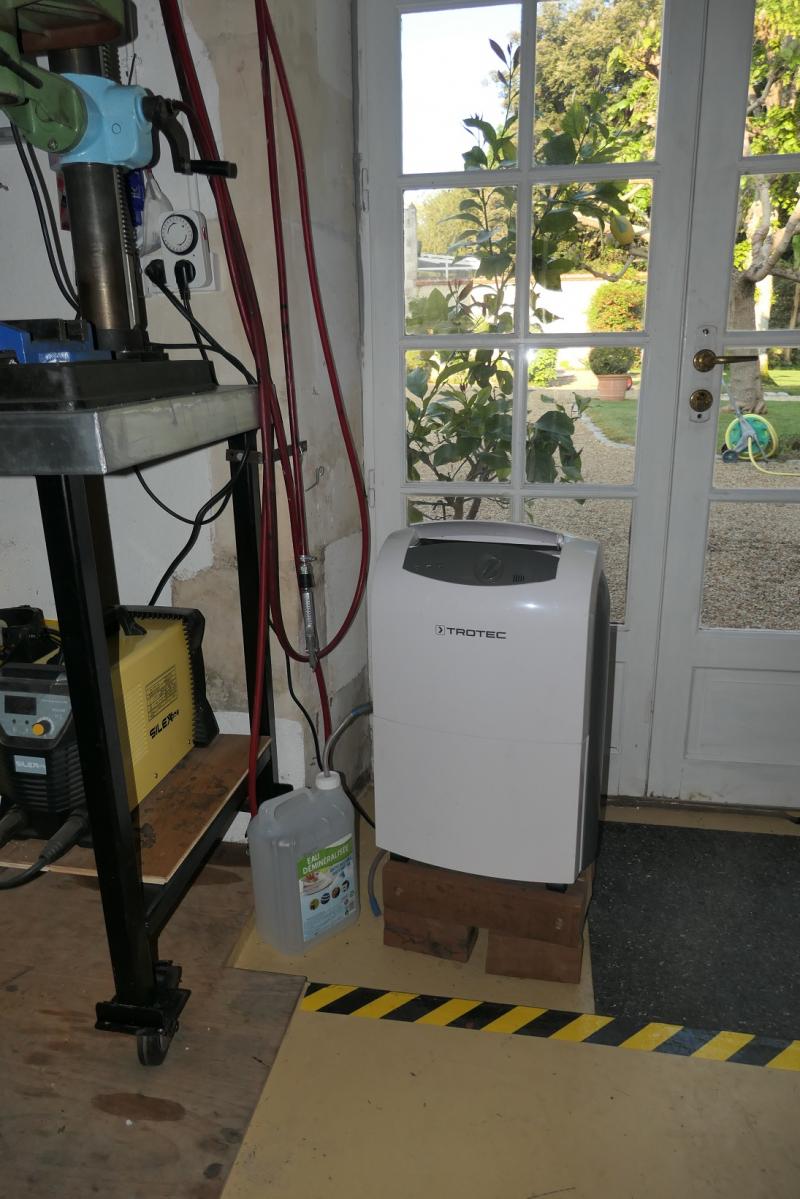 As others have said dehumidifier water is essentially distilled water. The notion that it is more damaging to meta than tap water is nonsense.

If you live in a soft water area then tap water is probably ok but Thames tap water is very hard and will leave deposits behind.

Another option is filtered rain water....it's free and so long as your roof is clean and not concrete should be reasonably soft, although certainly not distilled! I would not use it in batteries though!
Julian the E-type man
1962 FHC
1966 MGB....fab little car too
Show post links
Top

Another option is the Brita cartridge filter jugs. I've tested my water for an aquarium, and it's too hard. Put it through the cartridge and it's really soft, almost pure. Takes about 5 mins for a litre to go through, so a bit of waiting involved if you're doing a water change, but easy enough if you plan ahead. But easy if it's just a top up.
Malcolm
I only fit in a 2+2, so got one!
1969 Series 2 2+2
2009 Jaguar XF-S
Show post links
Top

Yes Malcolm, in most cases filtered water is probably better than straight tap water but will still probably contain some impurities.

There is no doubt that distilled water is the ultimate choice (avoiding any debate about waterless coolant here) for addition to cooling systems along with the correct antifreeze/inhibitor. Dehumidifier water is close to distilled water but not quite. There is no substitute for boiling the water and condensing the steam produced.

During WW11 there was debate at Rolls Royce about the quality of water to add to the glycol used in the Merlin engines, lots of to and fro until Lord Hives cut across it all with the statement “if you can drink it it’s good enough”!

What was the life expectancy of the Merlin engine during war time?

Now we are trying to preserve our engines for another 60 years of service.

Merlin engines were scheduled for overhaul at between 240 and 340 hours depending on application, however 70% were expected never to reach their scheduled maintenance.
David Jones
S1 OTS OSB; S1 FHC ODB

Watching one of Jay Leno`s videos - he has a RR Merlin engine . The starting procedure involved an electric oil primer pump that raised the oil pressure in the engine before it was turned over...thought that might be good idea for the Jag engine - to save wear on start-up

Mark, a lot of Merlins are now fitted with the oil primer. As the engines are not run anywhere near as often as they were in military service it is a wise way of ensuring good oil supply to the cams which is where the oil primer is plumbed into.

Stu, yes, different times but Merlins, like all aero-engines, especially military ones, spend a far greater amount of their time at much higher power levels than all but e.g. Formula One cars. An explanation for the relatively low hours between overhaul, though 200 hours at high power and, say, 250 mph equates to 50,000 miles. Would an XK engine in a C or D Type last that long?

As for tap or distilled water, that's up to the owner, after all. And we all care for our cars and engines

And the Hives quote was thrown in for light relief.

Our window cleaners always took great interest in my home restoration so when I was wondering what to use I had a rare brainwave. They had just changed to the long pole method which requires very pure water (after one of them nearly killed himself falling off a ladder) and had invested in reverse osmosis equipment which they assured me was purer than distilled water. They were happy to provide me , gratis, with enough water to fill the cooling system because, as they said, my wife always provided them with a nice cup of tea. Whether it really matters I don't know but it seems sensible to use the purest water you can get. Incidentally, apparently it is wonderful for washing the car as it leaves no streaks or scum.

If given the choice, I would definitely be using distilled/deionised water, something which as an organic chemist I get through by the litre load.

As an experiment for the casual observer, allow to evaporate or boil dry 500 mL- 1 L of both tap and distilled water and compare the residue left behind. The residual ions in tap water (which is required by law to have a degree of mineral content and as a consequence, conductivity) can be responsible for the build up in water coolant channels. Think of limescale in your kettle, particularly in hard water areas. Would you want that in your engine if you could avoid it? I very much doubt it. If you value your time too much, look at the back of a label of a bottle of mineral water and it will tell you the mass of the residue when the water has been evaporated as a real-world example.

In the context of my work, it's not uncommon to make an organic compound which unfortunately ends up being aqueous soluble as opposed to sitting in an organic solvent, particularly if it contains polar functional groups such as multiple alcohols or amines. If I then remove the water through rotary evaporation, I am not left with the inorganic mineral residue which would then be difficult to separate. Similarly, we use distilled/deionised water in the water baths of pieces of equipment so as to prevent the same mineral build up, particularly at my university in which the calcium content of the water in the area is pretty high.

Yves' solution for saving the water out of dehumidifier is perhaps the most cost-effective and easiest way of acquiring the stuff to the average household, which will most likely be orders of magnitude better than shoving it straight in from the tap, at least in terms of longevity.
Simon Johnson
Postgraduate Synthetic Chemist at The University of Bristol
E-type Club magazine contributor
Chasing the dream of a S1 4.2 OTS, but plan on getting an E ASAP!
Lucky passenger in a 1962 FHC - 860927 - See restoration thread
Show post links
Top

The manual says the water should as "neutral (soft) as is available".
I was sure I'd read "rainwater" in an official document somewhere, but can't find it now. A Google search did find that on modern Jaguars the suggestion is "make sure you carry a supply of fresh (rain or distilled) water. "

Yes, I have a dehumidifier and it's a great source of clean water.