So do XK Engineering offer a Head Restamping service?

One assumes that if it was worked on there for 2 years (per the Silverstone Auction description), that the head change may have happened on their watch. Perhaps one of the "other" services that they don't list on their website?

Well Will if you need an engine block you can get a new one from Jaguar now - and they will stamp your original missing number on it - with I think a suffix like this # - £16000 though.

Lets not assume that XK restamped the head......it could have been supplied to them to fit....Steve
Steve
1969 S2 2+2 & Building a C type replica
Show post links
Top

"I also contacted Silverstone auctions when a Replica C type they were selling had the reg number of an xj6....registered with dvla as an xj6."

If it is a replica it will have had a previous identity. I know of a very smart SS100 replica which used a XJ6 as its donor, it is still shown as such on its V5. Another car, owned by a regular contributor to this forum was originally a 1967 E-Type, but is now in its third incarnation as a XKSS, having previously been a D-Type. It still carries the chassis number of a 2+2.

This is not the same as pointing out that a car which Silverstone claims to have a matching numbers cylinder head, appears to have had two different ones in its life. One is repurposing a car which would otherwise be scrapped and its parts sold on, the other appears to be an atempt at defrauding a purchaser.
Chris '67 S1 2+2
Show post links
Top

In my experience it can be extremely difficult to trace the history of an early car. I bought a flat floor rolling chassis fhc about twelve years ago with no identity or history. The only number I found was the body number and when I applied to JDHC I was told that number was listed as being an early roadster registered in Sweden.
Luckily I havent spent lots of money restoring it to a complete car but I still have it so if anyone has advice on how to gain an ID without buying one off Ebay I'd be very grateful.
Derek
64 ser 1 fhc, 71 ser 3 2+2.
Show post links
Top

The head was restamped before 2016 and likely earlier. There is no suggestion XK Engineering had anything to do with changing the identity. My guess it was done by a previous owner when the engine was rebuilt in the 1990's. It is all in the timeline detailed above. XK Engineering were given the red car, bought by Steve Coogan, and asked to restore it to his specification.

No point involving Silverstone as they take on face value what the seller tells them. Besides they might kick up a fuss and want this thread deleted. Better to keep a low profile and let Google find this information if anyone is interested.
David Jones
S1 OTS OSB; S1 FHC ODB

chrisfell wrote: ↑
Wed Jul 15, 2020 1:54 pm
Curious, one matching number on a cylinder head, but apparently two different cylinder heads. One of them is surely a ringer. From being all anorachy, this thread has suddenly taken on the far more interesting mantle of an archaeological exposé. Anyone feel like they want to cause some mischief by asking Silverstone Auctions to clarify?

Having re-read (and combined) the two auction descriptions and their associated photographs, we appear to have a car that has: The above is simply from the auction descriptions and their accompanying photographs without the benefit of a full under the hood close-up examination. Without doubt, the latest restoration has put the car back in a far better place than it used to be, but it does feel a bit like “Triggers’s Broom”. At what point does a historically important car lose that credential if its originality has been eroded away to a point it is virtually undetectable. If I was to contemplate spending that type of money, I would want to see photos of the numbered crankshaft, flywheel, crayon marks behind the dashboard, upper and lower gearbox number stamps, engraved date codings on the differential etc etc.
Last edited by Philk on Sun Jul 19, 2020 8:52 am, edited 5 times in total.
Phil
1964 S1 3.8 OTS
Show post links
Top

2016:
You can see another number under the new one - specifically between the 6 and 9. Also notice the dash is just a straight line whereas the Factory always used the number 1 on its side for that. Also the roughness of the casting has been smoothed out in that area by the grinding away of the original head number: The block is correctly stamped - note the horizontal 1: 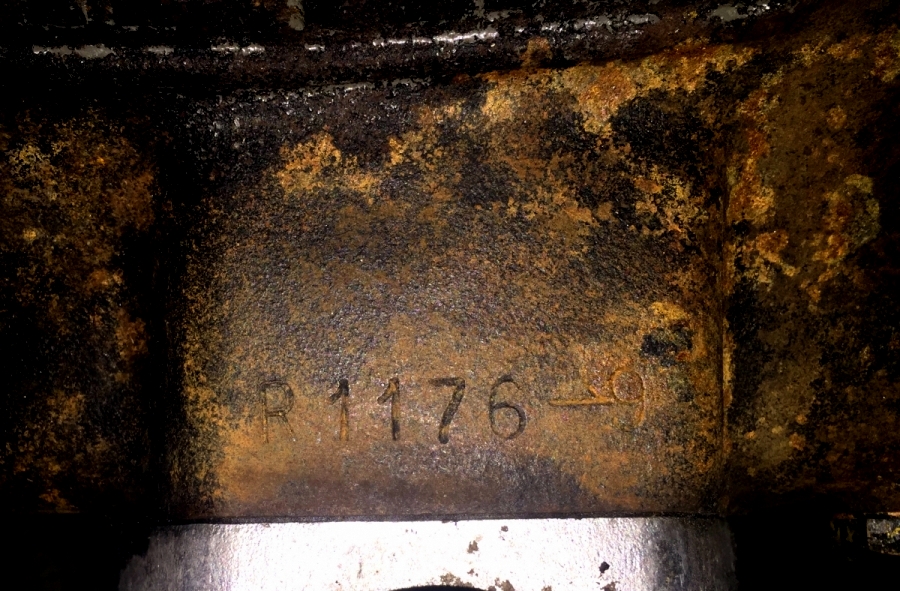 2020:
The orange paint over the number looks as if it has been put on with a knife and that part of the block has now become a very rough looking cast, possibly to occlude what is underneath using filler: 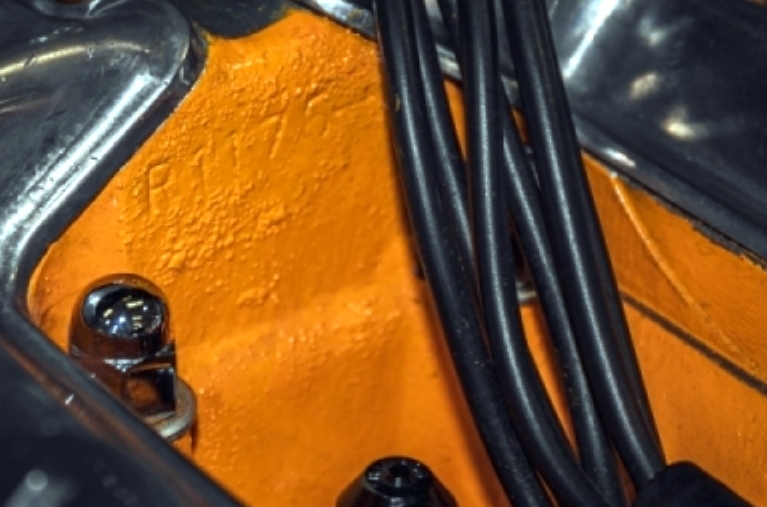 If the car been described correctly (new bonnet, new head, lots of bodywork, good honest usable car) then there would be no perceived attempt to mislead potential buyers. As enthusiastic and experienced experts of the E-Type it is beholding to us to cast shade where it is due.

I have seen this in the past viewing cars where the head has tried to be altered and re-stamped. I nearly paid a deposit on one such car but that's gone to Japan now.
Look closely at the "7" digit on both the head photos. It's looking different to the "7" digit stamped on the block.
On the block the 7 has a slight curve at the top of the vertical where it meets the horizontal and progresses down the length of the number. Should I imagine the numbers stamped on the block are original jaguar font?
Clive
August 1961 Flat floor ots
Show post links
Top

Yes, the block has the correct period Jaguar Factory font for the 3.8 cars. A different font was used on the 4.2 cars.
David Jones
S1 OTS OSB; S1 FHC ODB

“ The correct colour for the anorak would match the paint on the car..”

Is it me or does the engine number on the head looks smaller font than it should? Maybe it’s just the angle?
It should be about 5/16th inch I believe...correct me if I’m wrong
Robbie 1962 3.8 Coupe OSG 1962 OTS ODG
Show post links
Top

I note from today's JEC weekly update that they are highlighting the forthcoming sale of the car.
Phil
1964 S1 3.8 OTS
Show post links
Top

Apart from the head topic, imho the bonnet mouth is of the later bonnet version and not the slightly smaller early welded louvres (incl OBL) bonnet mouth. So I assume, they simply took a later bonnet and converted it to the early one.

This implies the next question; which louvres and flanges did they use?! All louvres repros offered are to my knowledge not correct and have the wrong profile. I have one of the lastest repro sets lying next to some original louvres.

Issue with mouth (and with louvres / flanges as well) is: if it needs correction, you always have to repaint at least the bonnet, if not the whole car. And if you go for a complete repaint, it is almost the whole hog again.

Here is a pic of a believed to be original early bonnet / mouth: 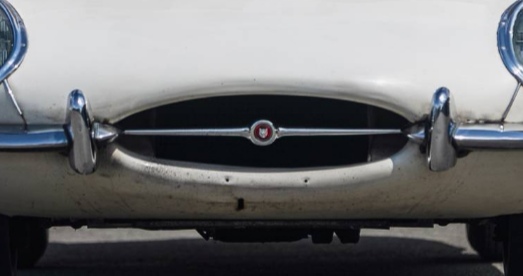 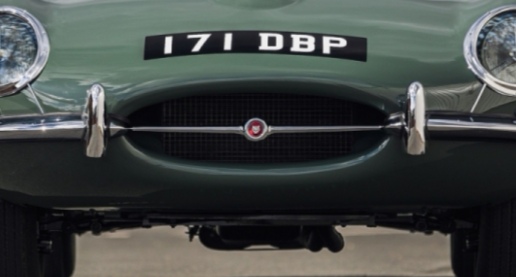 " In the early seventies the bonnet was replaced with the standard inside lock and pressed louvered type, "
Clive
August 1961 Flat floor ots
Show post links
Top

" In the early seventies the bonnet was replaced with the standard inside lock and pressed louvered type, "

But when restoring and converting it back to a welded louvres, outside nonnet latch bonnet, this could have been considered...

In particular when you ask top money and stating this car to be in a superb condition, which has won several concourse competitions

But yes, this type of mistake can broadly be seen. I think even the McLaren E-Type had this wide mouth when being advertised for sale.

And my point here is: rectifying spinners: easy. Cost you maybe 300-400 GBP. But this is a bigger thing with the need to redo the paint job, at least on the bonnet
Show post links
Top

Yes, a nice one. What is your opinition about what value could be realistic ?