I recently fitted the solid state submersible fuel pump in my 3.8 and yesterday the pump packed up leaving me to get recovered, anyons had issues with this pump. I also noticed that the sealant on the top plate of the pump was weeping, I seem to remember a thread where someone else had experianced strong petrol smells due to the sealant evaporating.
https://www.sngbarratt.com/English/#/UK ... %20type%60
Show post links
Top

Hi,
Yes there have been a couple of threads related to leaks from the sealant where the cable enters the plate, although from memory these were a few years ago and a redesign was thought to have sorted this. I’ve had issues with the delivery pressure being twice that spec’d for the carbs, causing flooding. I had to fit a regulator to sort it out. 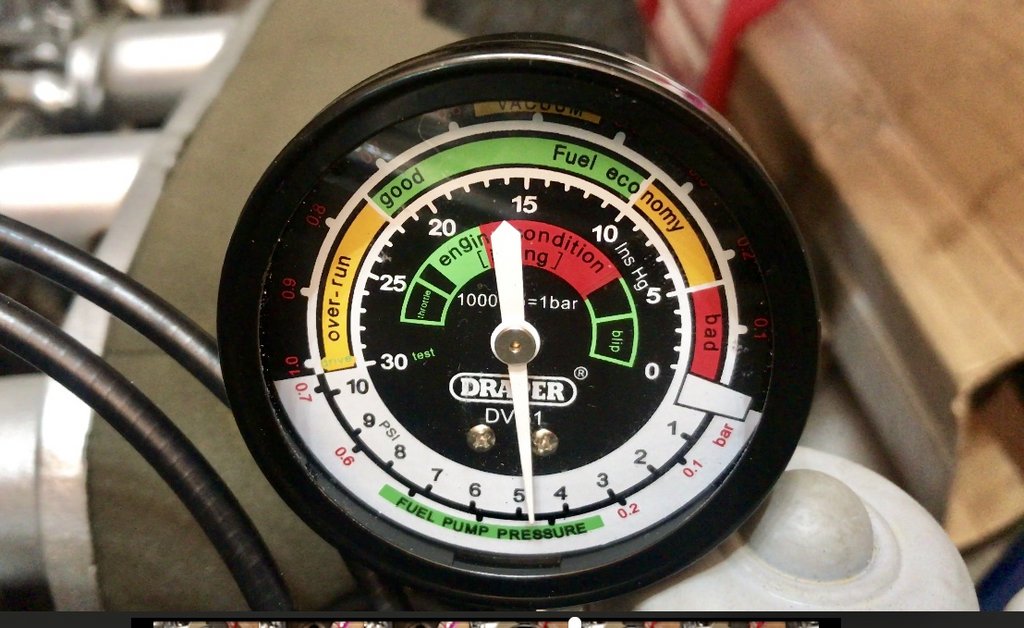 No issues with failure or leaking on the ones we fit (SNG), but we do have to install a filter king adjustable reg to bring the pressure down.
Show post links
Top

That’s interesting Ben, when I sent mine back to SNG because it was flooding the carbs (no leaking issues so far), they were happy to swap it out. They provided this feedback:
The pump motor has an internal bypass port which cycles at about 2.5 PSI, so they should be entirely self-regulating.
They are normally very reliable and any returns we have are usually related to stale fuel or over use of additives.
Having said that I ‘never say never’ with any part and a blocked bypass port could give overpressure, so if you have any doubts I would be happy to replace your motor unit.
However, the replacement still pumped out at over twice the recommended pressure. I informed them of this, but did not get a reply. Clearly there is an issue, possibly a faulty batch? I spent weeks trying to sort out what I assumed was a carb float/valve/setup issue, replacing all the floats, needle valves and arms - expensive. Having to fork out for a Malpassi regulator as well to sort it out was an expensive compromise.
Richard

I had one of these pumps pack up on me three years ago, as I was leaving a car show. I had to be recovered as well, very frustrating since the pump had only covered 800 miles from new. There were no external signs of failure and removing it did not shed any light on the cause either.
I returned it to SNGB who replaced it without a quibble even although it was out of warranty. They said it was not economic to repair. I suspect cheap Chinese electronic components were to blame.
As a result the car was laid up for 8 weeks while a new batch was manufactured.
I now carry a spare just in case.
Ironically the original pump was replaced because it decided to stop working, although to be fair it was 55 years old. Anyway during the lay-up period I decided to strip it down and then put it back together again. After this it decided to start working again so as a result I now have two spares.
I'm sure you will not have any problems getting an exchange unit from SNGB. If however they state that they've never had one fail before just quote my experience

I recently fitted a new solid state pump from SNGB and also replaced the badly corroded tank with a new Galvanised tank. On running the car up to temperature in the garage eventually the pump stopped and the 5 amp fuse was found to be blow. A replacement fuse was fitted and all seemed fine so I decided to check the pump current with a multi meter. The current measures between 3.3 and 4 amps depending on engine revs and battery charge. This current is much higher that the original Lucas 2FP pump which is between 1.2 and 1.8 amps.
I am concerned about the safety issues and do not plan to increase the 5 amp fuse rating to compensate.
Has anyone had a similar experience or is my pump faulty?
Show post links
Top

The Lucas 5A fuse Jaguar specified would be correct for a device drawing around 1.8A as it is rated at the load at which the fuse will immediately blow. This is the surge rating rather than the continuous load it can handle for a period of time without blowing. So for the modern pump drawing about 4A you need a 10A surge/5A continuous fuse. Unfortunately there are two systems - British and American - so you need to be sure where the fuse is intended to be used. British use the blow amperage whilst the American BUSS system uses the continuous rating so for reliability of your new pump you need to look for a 'proper' British Lucas type fuse or one with dual ratings such as 5/10A. If a 2.5/5A fuse had been fitted it is not surprising it blew.
David Jones
S1 OTS OSB; S1 FHC ODB

Yes, but the issue is why should a modern solid state pump need to draw more current than a 60 year old design, after all it only needs to deliver the same amount of fuel at the same pressure as the old Lucas pump.

My feeling is that the SNGB pump is probably faulty, so I am interested to know if anyone who has fitted one of these pumps in place of the original has also had to increase the fuse rating to 10 amps.

I have one fitted since they first became available (I was the one who discovered the leaking gland, now fixed by SNGB )and have not changed the fuse. I have never thought to check the current drain. Are you sure the fuse that blew was not a 2.5/5A?
David Jones
S1 OTS OSB; S1 FHC ODB

Depends entirely on the pump. There's no reason at all why the replacement might not need more juice than the original. I believe the pump SNGB uses in this is also used in the XJ6 although I don't recall where I heard this.

The 5A fuse in socket 4 was used for the fuel pump in some cars. Others take power from fuse socket6 with a 30A fuse.

I have the SNGB unit in both my 3.8s. Apart from the fuel leakage problem I've not had problems with fuses blowing.
Andrew.
881824, 1E21538. 889457..oops. Jezza the V12 XJS race car.
http://www.projectetype.com/index.php/the-blog.html
Adelaide, Australia
Show post links
Top

Just went into the garage.

That pretty much agrees with my findings. in other words the SNGB pump pulls more than 3 times the current of the Lucas pump, so definitely the original 5A fuse as fitted and specified will not be suitable. Strange thing is that the SNGB pump does not carry any instruction to increase the standard fuse rating.

That's not something I like to do and I am concerned about the possible increased fire risk in the event of a pump defect.
Cheers
Show post links
Top

I think the pump wiring is size 14/0.3 rated at 8.75A continuous (17A blow) so using a 5/10A or 8/15A fuse would not cause a fire risk. The rest of the car uses 17/35A fuses for the other ancillaries including things like panel and courtesy lights so your risk assessment should worry about those.

Try a new 5A fuse and see how you get on as fuses do age and become more prone to blowing. Otherwise fit a bigger fuse - silver foil wrapped around the blown fuse used to be popular back in the day!

Andrew - were those measurements taken with the pumps dry or primed?

The pump used is the same as the ones used on the Rover SD1, early XJ6 and TVR V8. Can't find a spec sheet though.
David Jones
S1 OTS OSB; S1 FHC ODB

With the 2FP back in place in the tank I can confirm that the current is 1.2 amps max under running conditions. The new SS pump is now back at SNGB and I am waiting their conclusion if the one they sent me is faulty or if all their solid state pumps pull 3 times the current of the original 2FP
Show post links
Top

Hi, The latest update is that after I sent the pump back to SNGB, they eventually informed me that the pump was working fine and as expected.
I informed them that I had never said the pump did not work but only that it draws 3 times the current of the original Lucas 2FP and wont run reliably with the standard 5 amp fuse.

They checked again and after nearly 2 week delay, to my surprise they came back with the following comments:-

"Further update from the technical team:

The manufacturer has confirmed that the pump draws 5 amps. The customer is comparing our pump with his original which draws 1.8 amps.

The pump does not have any fuse protection in a standard harness, so any fuse failure issues he has cannot be related to the pump unless his wiring has been altered and is now non-standard"

johno560 wrote: ↑
Tue Aug 11, 2020 11:00 am
"Further update from the technical team:
The pump does not have any fuse protection in a standard harness, so any fuse failure issues he has cannot be related to the pump unless his wiring has been altered and is now non-standard"

They have confused the 3.8 with the 4.2 as the latter has a fuel pump with no fuse in the circuit. The 3.8 certainly has a fuse as you can see below:

So either SNGB need to make it clear the new pump draws 5A and the fuse should be changed to match or (better still) provide a suitably rated fuse with the pump. There is no technical reason the increased draw of the new pump should cause a problem as it remains well within the spec of the loom.

There does appear to be considerable angst among some owners who want to reduce the electrical 'consumption' of their cars mostly seen in fitting LED lights.

Total = 38.8 amps assuming we are using all of the above at the same time. Add 3.2 amps for the new fuel pump. The alternator is 60 amp (hot) and the battery 43Ah so nothing to worry about.
David Jones
S1 OTS OSB; S1 FHC ODB

I’d be more concerned that the solid state 3.8 operates at over 5psi which can cause flooding.
Richard