Has anyone running Webers (or throttle bodies) done any back to back experiments with different length/shape ram pipes? When stuck at home due to lockdown, thoughts and plans of how to improve my car start running through my mind.

I’m not interested in chasing headline power numbers, or increasing the maximum BHP by revving the engine harder. I’m happy with the characteristics of my engine for a road car. However, increasing the value of maximum torque, and, as much as possible, pulling up the curve either side of the peak would be beneficial. On the dyno, maximum torque was made at 3250rpm. So, to do this, I need to get more mixture into the cylinders, and burn it more efficiently.

As they’re easy to change, thoughts turn to experimenting with ram pipes. What’s on the car at the moment is only on there because that’s what it came with. However, conventional wisdom suggests that longer ram pipes benefit torque lower down, and the XK engine in particular benefits from a long induction tract. Packaging space being more of a limiting factor to selecting the optimum than anything else. My intake manifold is quite short, so the available space for ram pipes is longer than some, but 60mm would seem to be the practical limit, still allowing space for a filter before hitting the bonnet inner wing.

The standard Weber ram pipes don’t look great from a flow point of view, when reviewed against that sheet that compares all the common forms, being apparently 1.2% worse (No 6) than a bare carb. The optimum elliptical form (No 11) flowing 5.8% better. However, this test makes no reference to the final tuned length of the intake system. I don’t know what baseline pressure or flow rate was used for this study, or what absolute difference in power and torque one would expect to see from switching between one ram pipe and the next.

My initial thoughts would be that I may see an improvement in changing to a full radius ram pipe, but I should try and keep the ram pipe length to the practical maximum. This assumes that ram pipe shape is actually a limiting factor in cylinder filling. If the restriction is further downstream, or the engine is actually benefiting from increased gas velocity due to an inefficient shape, then swapping may see no change, or actually a reduction in torque.

So, if you’re still reading this, then what have people tried with their Weber’s and found to work or not work? These look interesting https://www.med-engineering.co.uk/med-45-dcoe-dcr, though when you have to buy 3 sets, and pay for rolling road time, experimenting becomes an expensive game.

For reference, here’s what I have at the moment. 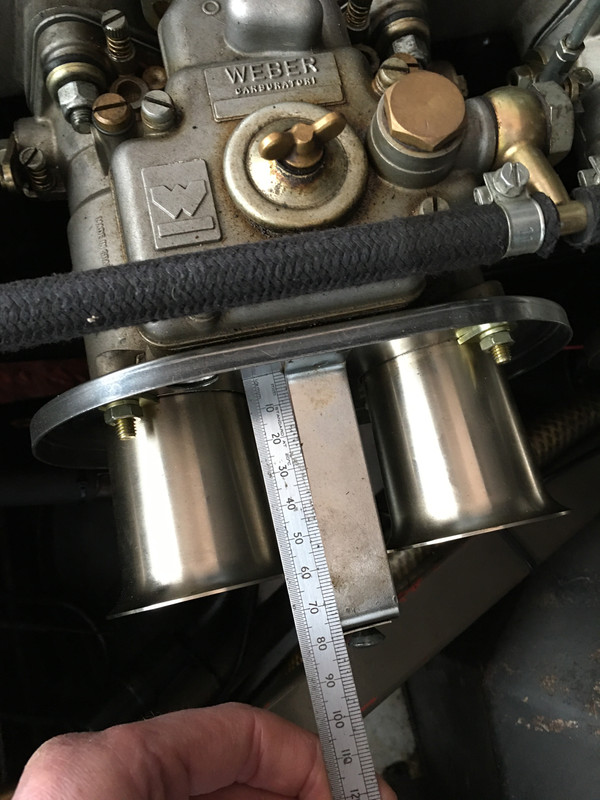 My own view about this is that trying to achieve what you are wanting is virtually impossible with DCOEs. In the first place, these are really a full throttle only carburetter, in which all part throttle effects can only be a compromise. This is one of the reasons why it is so difficult to get emulsion tubes which really work satisfactorily. In this second place, it is a truism that without a change of camshaft and/or cylinder head design, you cannot alter the total area under the torque curve. Thus, you can raise the peak, but you will suffer compensating losses elsewhere, or you can flatten the peak and raise the shape of the curve on one or other side of the peak ( but not usually on both sides ) . One thing people often do is use too large a choke size, and this is nearly always detrimental for road use . What you are trying to do is have your cake and eat it

. Incidentally ,the late John Passini's books are still in my view the best books on Webers
Show post links
Top

Hi Tom.....have you heard of the JDC Historic replica Facebook page worth signing up and posting on there....There are many running Webers and Throttle bodies and a lot of knowledge on setting them up..Steve https://m.facebook.com/groups/176178759 ... ef=m_notif
Steve
1969 S2 2+2 & Building a C type replica
Show post links
Top

Thanks, I’ll Have a read through the articles. I also have both John Passini’s books, they really are good.

I have to disagree though, that this is an impossible task with Webers. They receive a lot of bad press, most usually it seems, from people who’ve not tried them, or those who’ve not managed to get them to work successfully. Set up well, and of the appropriate size, Webers will work across the whole RPM range, and can be tuned to suit various engine characteristics. They are exceptionally tuneable, but that, I think, is also their downfall. Rarely, are the components they come with out of the box, the optimum. And as changing any one component affects more than one attribute, tuning them in requires a lot of skill and experience.

It is possible to change the area under the torque curve, with a few caveats. Firstly, in saying it’s not, it assumes that the engine is already set up to the optimum, and the curve measured on the dyno is as good as it can be. In the case of mine, it probably isn’t. Secondly, whilst head porting and camshaft specifications do play a big part, the system should be considered as a whole, from intake trumpet to the tip of the exhaust pipe. The biggest change between Webers and SUs, and one I think is often overlooked, is the effect of the intake manifold itself, rather than the technology the carb uses to mix fuel with the airstream. With Webers, feeding each carb with a much straighter runner, you get a different effect to the more convoluted intake tract on the SU manifold. The effective length of the intake is likely different, as is the volume of air contained within. If this change can be used to better fill the cylinder at a given RPM and throttle point, the engine should produce more torque at that point. However, finding out exactly what’s going on requires specialist measuring equipment, usually on the preserve of large OEMs. I wonder if the effect were to be similar if one were to bolt 6 tiny SU carbs on to a similar manifold.

Webers do seem to fill the cylinder with a mixture of different characteristics to SUs. This is illustrated by the very different advance curves needed to get the best out of both, Webers needing much more initial advance early on. This would suggest Webers produce a mixture that takes a longer to burn property. I’ve never found out why for sure. Possibly the fuel doesn’t stay atomised as well at lower RPMs compared to that delivered by the SU set up. I’ve certainly found this to be the case with the experimentation I’ve done on my car. Sorting the ignition curve has made a much bigger difference than any carburettor fiddling when it comes to fixing the low speed stumble so commonly identified on Weber equipped cars.

Whether any of this fiddling results in a car that’s better than a well set up SU car is a moot point. I’m not about to convert to a set of SUs, and I like the challenge of fiddling. Having said that, I’ve driven 2 well sorted S1 4.2 SU cars, both equipped with SUs. One was standard, and one substantially modified, and I don’t feel my car felt slower than either, probably quicker than the standard car, and on par with the modified car. As far as I’m aware, the engine mods on my car only extend to triple Webers, 123 distributor, and a tubular manifold and sports exhaust, bolted to what’s an otherwise standard (And probably tired) 9:1 compression 4.2.

Peak torque, when I had it dyno’d was measured at 398Nm (293.5ft lb) at 3246 RPM. Whilst the aspiration would be to drag the whole torque graph up over the useful RPM band, I’d definitely take a wide flat spread over a useful range, over tuning to only drag up the absolute number at one given RPM.
Tom
1970 S2 FHC
Show post links
Top
Post Reply Previous topicNext topic
5 posts • Page 1 of 1