Hi All...can you help please...yes i know its here somwhere on the forum and iv just read Mike Cassidy,s conversion guide....a friend has a S2 ots converted left to right years ago but the indicator/ignition switch houseing is still reversed with indicator on left and ignition switch on right.......Mike Cassidy says its a simple case of rotating the switch assembly.......bearing in mind im helping my mate via the phone and cant look at whats going on but he tells me that the switches are screwed onto a bracket thats welded on to the column so the bracket needs cutting off.......so whats happening here...what have you done.......im sure its simple....thanks guys..Steve
Steve
1969 S2 2+2 & Building a C type replica
Show post links
Top

Ok so now have some more info....basically my mates column has a steering lock.....Mike Casiddy suggests to get a replacement rhd upper column or leave switches in original position....so is it possible to turn the steering lock and houseing....sounds like there is a sheer bolt holding the houseing to the upper column if we remove this can it be re positioned.....Thanks....Steve
Steve
1969 S2 2+2 & Building a C type replica
Show post links
Top

Is it the indicator or ignition switch he struggles with to rotate or both? On my S1.5 it really was very easy, so perhaps a PO has done something that prevents the easy rotation swap as described in the guidance. As part of my LH to RH conversion, i rotated the the ignition switch and also rotated the indictor stalk/horn through 180 from their original LH orientation, i did it about year ago, my vague recollection is the indicator switch rotation required removing the plastic cover, slack off the two Ring clamping bolts that are part of the direction cancelling mechanism and then easy to rotate the whole assembly through 180. For the ignition switch which on mine is mounted on a bracket it required removing a couple of retaining bolts to easily rotate it. Hope he succeeds, but if not its really not worth IMO cutting stuff to achieve.
David
1968 S1.5 OTS, ex USA converted to RHD
Show post links
Top

Steve, the brackets that hold the steering column need to be cut off and rewelded to reverse the position of the steering lock and indicators. Due care for the forward bracket with the collapsible mechanism.

Hi Guys....thanks for the replies....this is a photo of a S2 steering lock houseing....what my mate has is this same thing but the ignition switch is on the right.....so can this houseing be turned....think its just held in with a sheer bolt....Geoff...are you talking about the large cross bracket on top.....do you cut this off and reposition to in fact turn the column over......instead of just turning the ali housring part..Thanks...Steve

Hi Steve, I hadn’t noticed the sheer bolt and was expecting to re-weld the brackets. It depends on how easy it’ll be to drill out the sheer bolt. But a precaution, the angle of the sheer bolt holes need to be checked carefully to make sure a simple rotation will align the lock nicely.
Must admit you’d hope it would

Hi Geoff....so have you converted your colomn and is it the same as this one.....my mate is a bit heavy handed and jumps the gun a bit....told him to hold on while i post here...but justspoke to him and he.s drilling out the bolt

Hi Steve, no not yet which why my thoughts had been of cutting and welding. Looking at my column I couldn’t see how a bolt is threaded in, might be a tapered pin? If you look at your photo there doesn’t seem to be a thread but nor is there a taper

Sorry not to have the definite answer

PS, yes mine is similar to yours with the lock about 150 degrees rotated, not 180 degrees as the steering lock points slightly down from horizontal
S2 FHC Light Blue
S2 OTS LHD - RHD full restoration
Show post links
Top

Hi Geoff...from chatting to my mate he says on the top of the ali houseing on that slightly raised section it looks the same as the 2 sheer bolts holding the ignition lock to the houseing....
Steve
1969 S2 2+2 & Building a C type replica
Show post links
Top

Just checked my lock and it looks like it is a taper pin, 10mm at that! The open hole you see in your lock housing photo is tapered and without drilling out the pin I can’t see where a bolt can thread into.

The lock has a thread to accept a shear bolt, I do think this is different, hence a taper pin is my suggestion

Thanks for the replies...just had mate on the phone...he drilled out the pin....the houseing was still really tight on..but managed to tap it around to new position......will now fit new pin...so no cutting or welding needed..Steve
Steve
1969 S2 2+2 & Building a C type replica
Show post links
Top

so no cutting or welding needed..Steve

Hello Steve,
Late to the party, but of course, no cutting and welding required. The components of the Ignition Switch Housing/Steering Lock and the Steering Column are made ambidextrous.

The pictures used are of an S3 Steering Column, but the same applies for S2.

The following two pictures show the plug that needs to be drilled out (I have a fixture on a Machining Centre whereby the plug can be neatly machined away to nothing) and the corresponding bore that's used for the New Plug once the Steering Lock Housing is re-positioned. 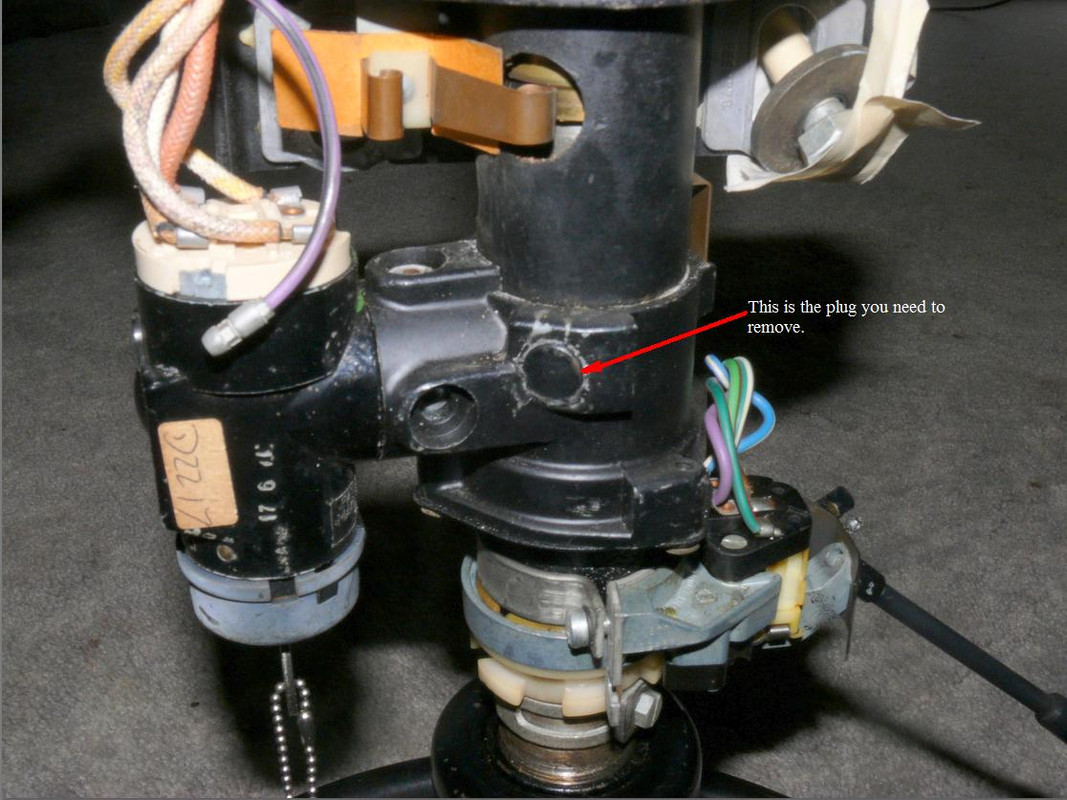 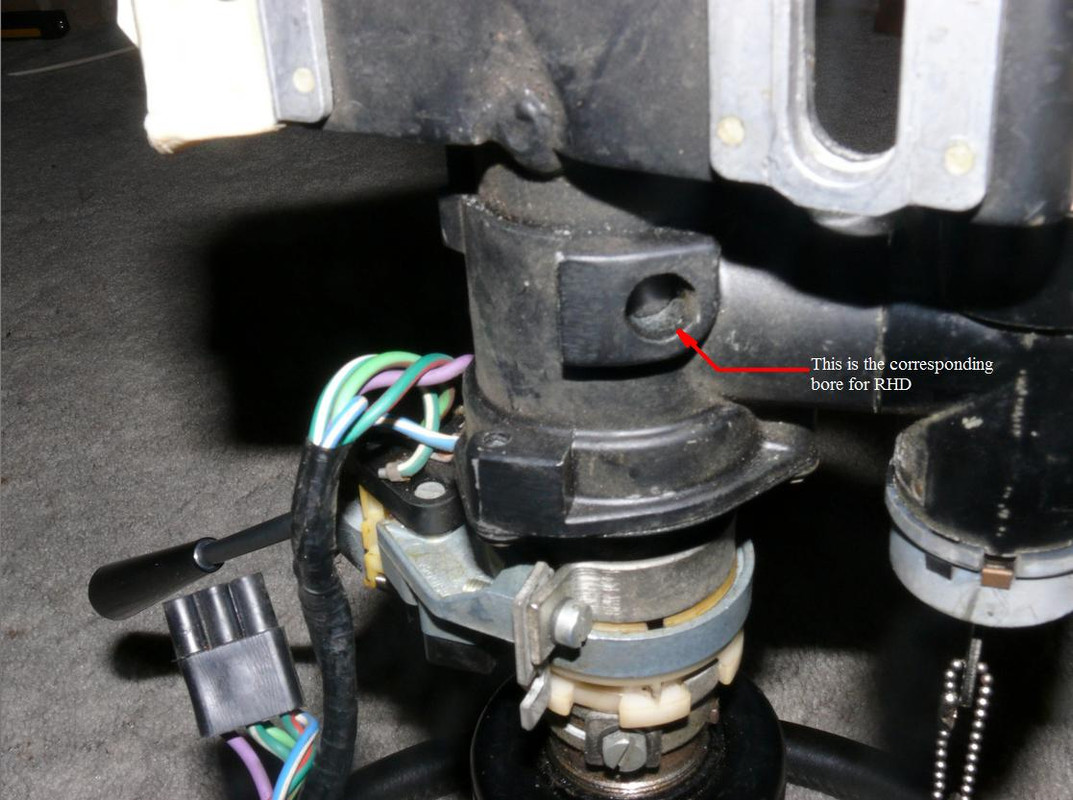 The Steering Column Tube has corresponding holes for LHD and RHD Steering Lock Pin position. When re-positioning the Ignition/Steering Lock Housing, these holes are used to index the Housing to its new location. Not a clear picture, but see the following picture: 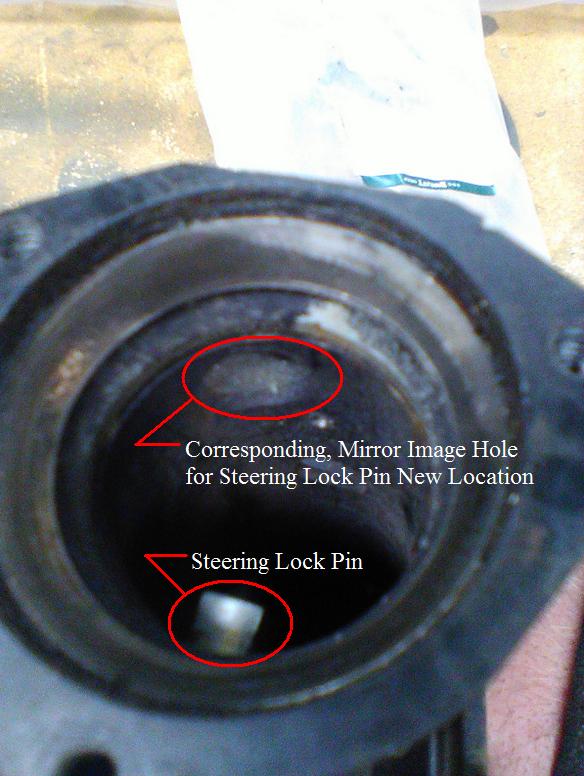 The diameter of the bore for the New Plug is the correct tapping size for M12. Tap this bore using an Intermediate and then a Bottoming Tap to the bottom of the bore. I've made a drill guide, that screws into this threaded bore, with a centre hole to guide a 5mm drill.

2. A short M12 grub screw that has a short 5mm spigot machined on its end is screwed into the new location bore so that the spigot engages with the 5mm hole drilled in the Steering Column Hole, The length of the Grub Screw should be such that it's outer face is below the mouth of the bore into which its assembled. The Grub Screw is firmed up and Thread-Loc used to ensure it doesn't come loose.

3. I finish the job by sealing the bores with an Epoxy Resin to make the new plug Tamper Proof and so that the completed job looks neat and tidy and as an added step to ensure the Threaded Plug doesn't come undone. See the two following pictures: 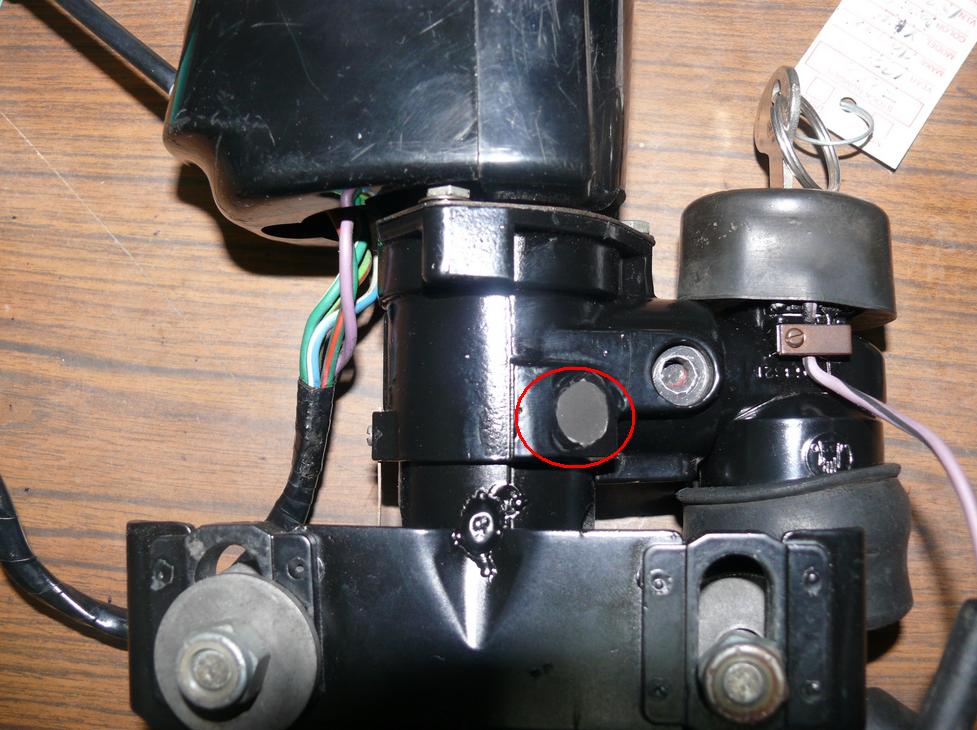 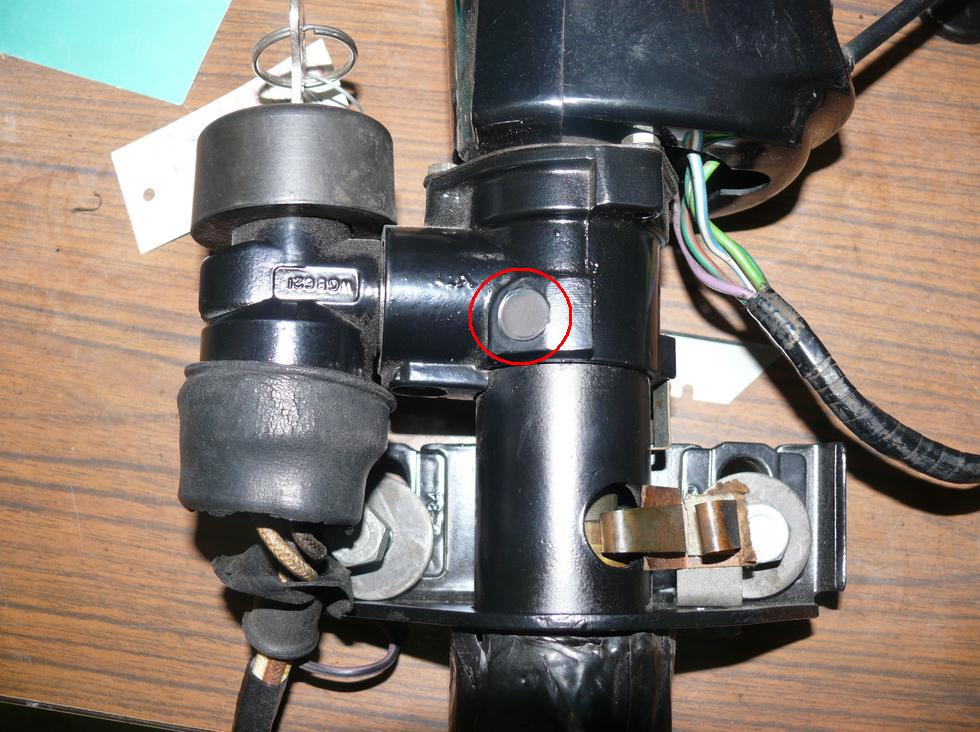 Hi Bill...great detail.....many thanks......unfortunatly my mate is a bit ham fisted...iv only spoken to him by phone and he dosnt do online research.....he,s already drilled out the pin and turned the houseing.....hopefully i can send him your info tomorrow and he can complete the job in a more professional way...many thanks...Steve
Steve
1969 S2 2+2 & Building a C type replica
Show post links
Top

Yes Steve,
It is pretty easy, I think I used a drill.
No welding or cutting required.
After I did it, I did wonder why I had bothered, as there is not much wrong with having the stalk on the other side anyway!
James

Steve, can you cut and paste Bill’s excellent description of the work into the knowledge section please for future reference?

Thanks Bill for clarifying things

After I did it, I did wonder why I had bothered, as there is not much wrong with having the stalk on the other side anyway!

Hello James,
Well, yes there is. If you don't move the Indicator Stalk to the outside, by rotate the Steering Lock/Ignition House to it's mirror image position, when converting the column from LHD to RHD, the outside profile of the plastic enclosure will foul with what should be the corresponding shape of the lower edge of the Dash Panel.

Just to round off...my mate came around today in his E type....he had done the job fairly similar to as Bill described above......obviously didnt have the machine tools to make a grub screw as Bill advised but he had some hollow tube that was threaded outside and inside(metric thread reducer)...taped the houseing 12mm as Per Bill,s info and used the center hole as a guide to drill the column......inserted the threaded tube cut to length....then through the center screwed in a small bolt through into the column.....done this on both holes in the houseing......Steve
Steve
1969 S2 2+2 & Building a C type replica
Show post links
Top