Cracks in the sills at the door corners.

#1 Cracks in the sills at the door corners.

I took the car to bits three years ago mainly to address these issues, but have got side-tracked and now find that if I'd wanted MonoCoqueMetalWorks to accept my shell in a container I should have booked it in two years ago ........ and so it's going to be Made In France after all.

There's too much filler just about everywhere but it doesn't seem to be concealing any horrors. 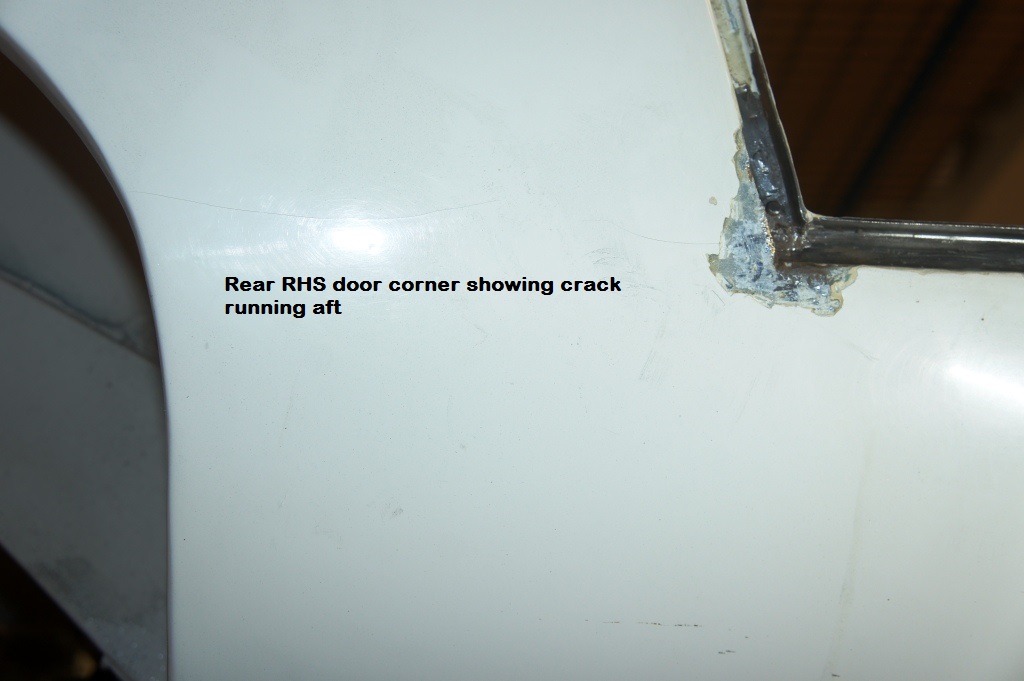 The shell was rebuilt professionally nearly 30 years ago, including outer sills and a whole back-end, I have the pictures, and it's been wax-injected and warm/dry stored ever since, so I don't think it's a corrosion issue. 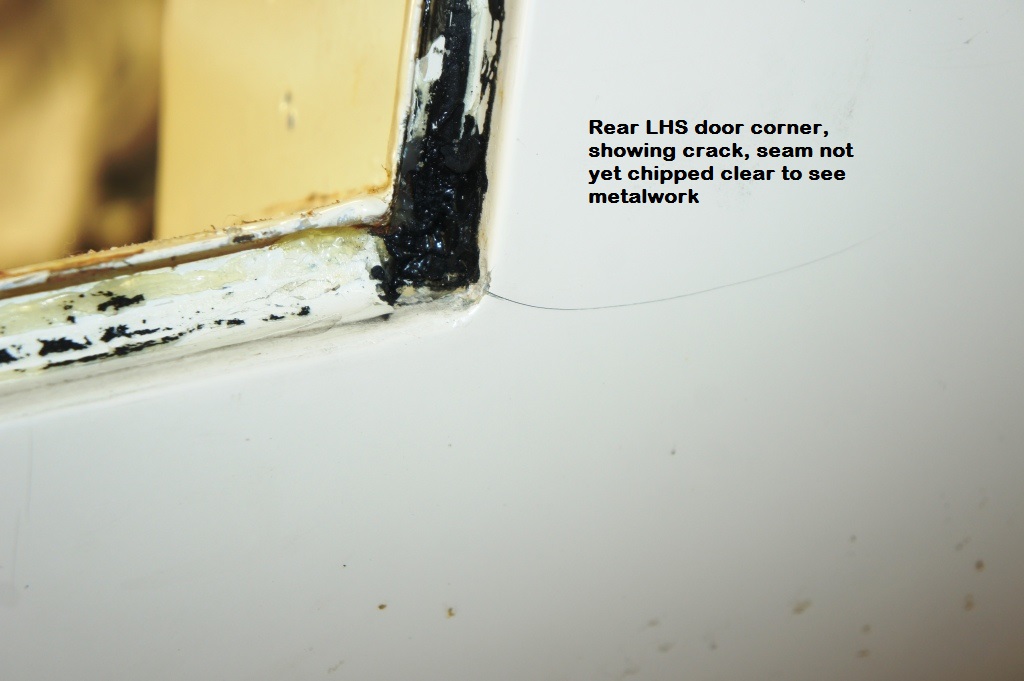 Indeed, I also had some cracking on other un-stressed areas that had received a skim of filler (doors, bonnet flanks) in the same period, and these turned out to be just poor surface preparation.

So I may just be looking at the same issue of surface preparation and/or filler type. 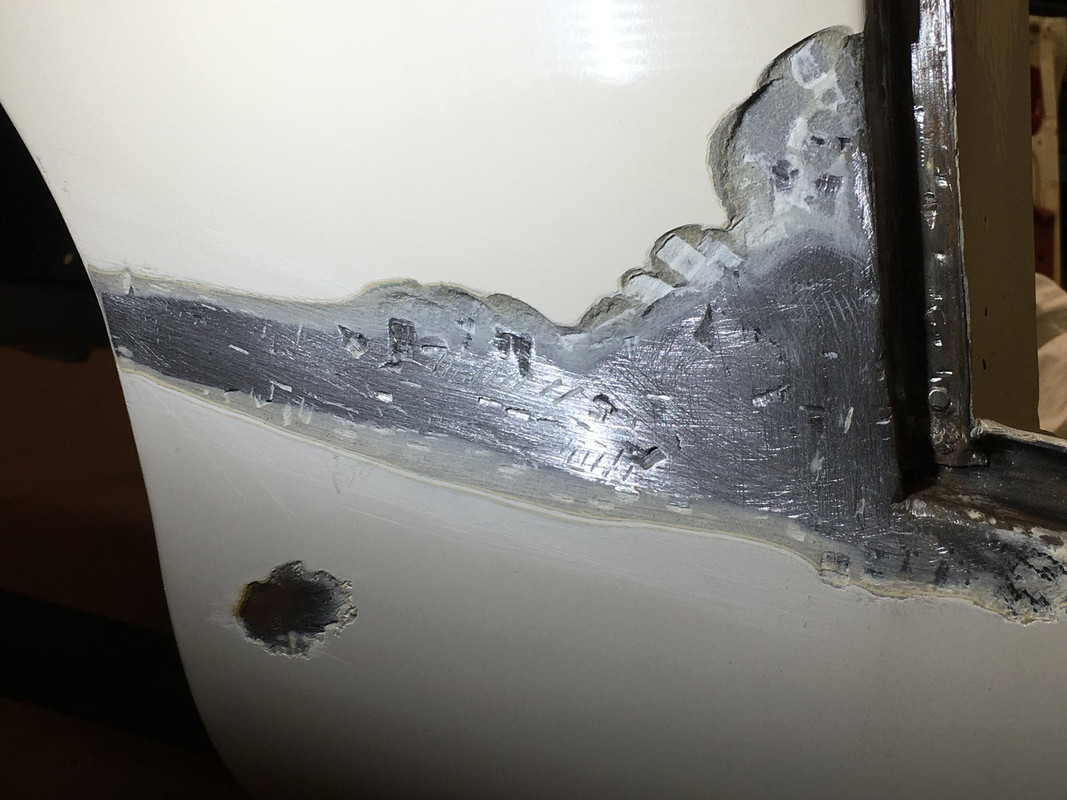 The lead-loading looks good, the gouge marks are attempts to test the filler's adhesion. 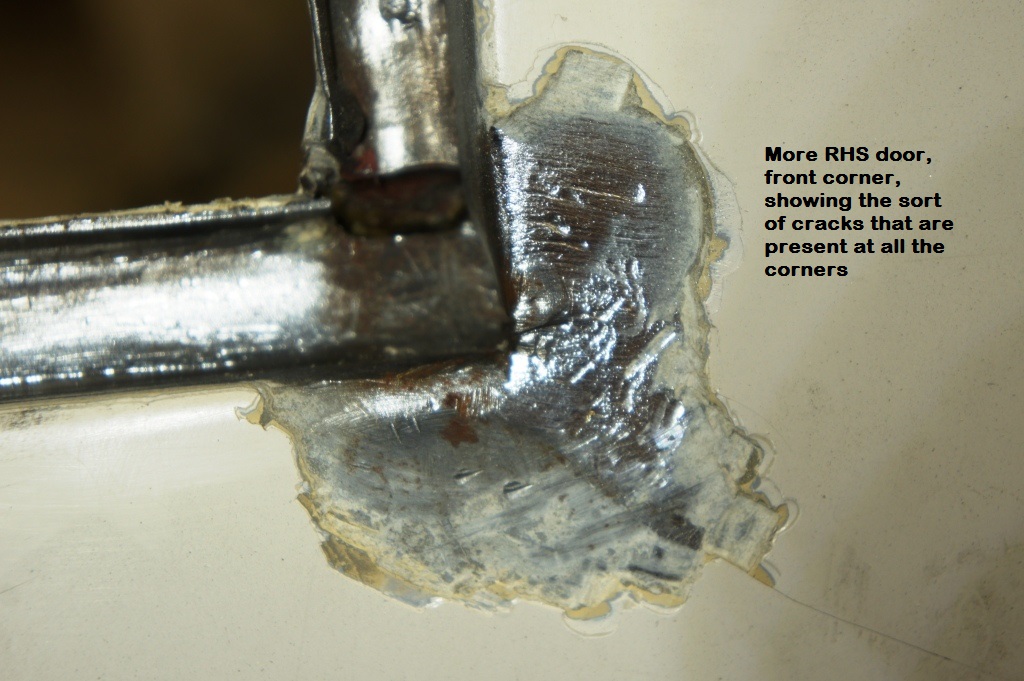 I'm wondering whether to ignore the temptation to melt the lead out of all the joints, and just re-do these areas with "better" and "more flexible" filler, as I've been told that this was an issue even in period due to the shell flexing. 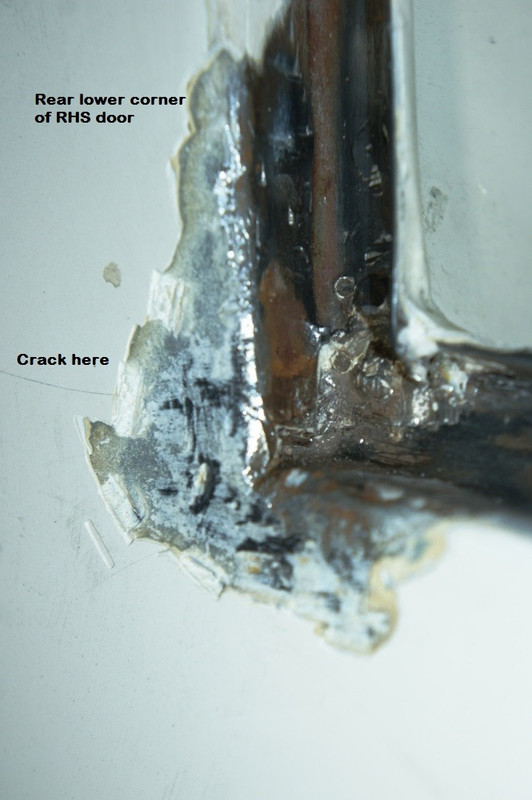 Has anyone else had issues like these on an otherwise sound shell ?

What fillers should I be considering as suitable for this sort of application ?

If anyone has had a professional address these concerns on their shell, and I think I remember a thread that touched on this but can't find it, could you tell me who did yours ?
Rory
3.8 OTS Cream 877393 Built May 28th 1962
1978 Mini Van
(plus bevel and belt single-cylinder Ducatis)
Show post links
Top

#2 Re: Cracks in the sills at the door corners.

Glad you're alive and well and as frustrated as me with the joys of E type restoration.

Could this be partially due to flex in the shell at these points, especially given that it is an OTS. I know Hutsons use an extra inner sill strengthener and Chuck uses his own internal ladder frame set up. You know me Rory, I used both. But I'm special

Also probably not what you want to hear but certainly in terms of the sills having been replaced(?), what was the quality of the welding?

Have you spoken to Angus? I'm sure he's encountered this before.

Gratuitous pic of inside my sills...... 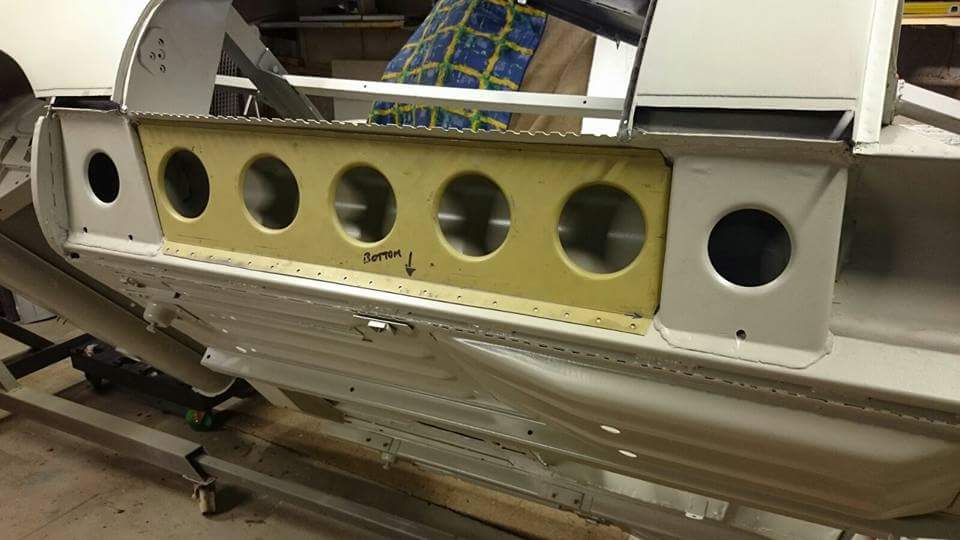 The stiffener is from Hutsons but a man of your skill could easily make one. I seam welded it to the A and B post strengtheners and put drain hole in the bottom of all 3 parts. More pics available if you need them.

As regards filler, I used Upol D on the recommendation of Andy at Hutsons and subsequently endorsed by the body shop. Again ask Angus, he's the man in the know.
Simon
1969 S2 OTS
Show post links
Top

#3 Re: Cracks in the sills at the door corners.

Sadly not what you wanted to hear, but your car flexes around this point. You can see the crack goes straight through the lead loading. To do that, the lead has to be firmly attached to the steel on either side and then worked continuously along the gap - it then cracks at the edge and then propagates over time.

Upol is what I used on my car.

#4 Re: Cracks in the sills at the door corners.

Couldn’t see the images ...is it just me?

#5 Re: Cracks in the sills at the door corners.

#6 Re: Cracks in the sills at the door corners.

I would remove the lead if it were me; it doesn’t look good to me and could be hiding a poor repair.

#7 Re: Cracks in the sills at the door corners.

I think, Rory, that the problem is that the lead creeps over time under the influence of gravity ( as does, believe it or not, glass ) and this in itself sets up stresses in the lead which then cracks . My OTS has done the same thing . If you reheat and repair the lead I doubt whether it will happen again in anyone on this board's lifetime !

PS it is certainly not something worth worrying about, and does not suggest that there is anything abnormal about the bodyshell on your car
Show post links
Top

#8 Re: Cracks in the sills at the door corners.

Cracking like that is a sure sign that there is unwanted flexing in that area
You need to find out why
Its broken through the lead loading as well
The sills on an ots are the only thing that keeps the front and back parts of the vehicle together and give it rigidity
If it was me and to be fair I don't have all the facts obviously, but I would suspect something hasn't been put back correctly
Or there is a structural integrity problem somewhere else
Would be great to see what's going on in those sills
Oh and I have never heard of lead loading move over time like glass
Old wives tale

#9 Re: Cracks in the sills at the door corners.

Christopher,
I'm not sure I buy that. The logic is slightly contradictory:- things that can easily creep don't need to crack; things that crack clearly don't creep enough.

(Conceptually this no different from plate tectonics and continental drift. There is a depth where the earthquakes stop - this is because the plates start to be more plastic at high pressure and temperature, but are brittle enough to crack nearer the surface where temperatures and pressures are lower.)

It is very common.

Refloating the lead will indeed probably make it good for another 25 years.

Some of us are younger than you think.

#10 Re: Cracks in the sills at the door corners.

Marek and Joe - and others

It's interesting : when I think about it, one thing which definitely supports the flexing hypothesis rather than the creep hypothesis is that I have seen this cracking between sill and wheelarch side panel far more often on OTS than on closed cars . Nonetheless, the lead unquestionably does creep downwards over the years, but then its design life was probably of the order of 12 or 13 years rather than the 30 -50 years between rebuilds that we are talking about

Another curious thing is that it seems to happen far more on this seam than on the equivalent one between forward sill and bulkhead, and yet one might think that there was more torsional stress on the bulkhead than on this area

BTW Joe, the glass is most certainly not an old wives' tale . I had to change some of the glass in my house from the Victorian era, and out of curiosity we measured the thicknesses at top and bottom and in a pane of only about 10 by 8 inches and 150 thou thickness the difference was consistently of the order of 5 to 10 thou

#11 Re: Cracks in the sills at the door corners.

Next time someone asks you your age, just tell them you are "nearer sixty than fifty". That way we can all be equal.

#12 Re: Cracks in the sills at the door corners.

I was brought up to use only aluminium reinforced body filler on metal panels/parts as it is more flexible, less absorbent and gives a metalic finish when correctly wet & dry rubbed (Technical term we used was 'knocked down') and dries/sets harder than polyester filler, it is more expensive but so much more worth it .. The only time to use polyester filler is when your using it on GRP. Make sure the surface is clean and free from oxodisation before application.

Edit: Leading is easy, do NOT have your flame fierce, use plenty of tallow and have a selection of wood floats to hand.
Steve
Technical Adviser to a

#13 Re: Cracks in the sills at the door corners.

There's too much filler just about everywhere but it doesn't seem to be concealing any horrors.


I'm surprised at the amount (thickness) of filler, which is surprising for car with apparently proper leaded joints. I suspect there may in fact be surprises lurking below as there really is no need for filler to 'contour' the body on an E if lead is used. Just a wee bit here and there to even the surface.
Steve
'65 S1 4.2 FHC
Show post links
Top

#14 Re: Cracks in the sills at the door corners.

I mentioned to this group that I would be inspecting the sills in my 66 OTS. I decided to do this after reading all the discussion here and having a nagging feeling that I could have some rust problems in there.

With this ion mind, we are going to replacxe the oputer sills and end close plates. We will take off the bottom couple of inches of the inner sills and replace all the stiffeners. We could save and re-use them, but thought we would put new ones in.

We still have to look at the rear floor (over the radius arm mount areas) to make sure they and the braces back there are good.

I’m really happy I decided to get inside them. If you looked at the car before, you would swear there was no problem whatsoever. This is one time my paranoia paid off:)

#15 Re: Cracks in the sills at the door corners.

I can’t see Rory’s images either.
After a few minutes where there was just a gap under the second paragraph, the word “image” appeared there.
Perhaps these are very large attachments which are taking time to download ?
Regards,
Dave
Dave Rose
1967 Series 1 4.2 FHC
Show post links
Top

#16 Re: Cracks in the sills at the door corners.

No it's not just you, I can't see Rory's images either. All was fine yesterday but not today for some reason. What's the solution tech gurus?
Alan Cochrane

#17 Re: Cracks in the sills at the door corners.

Hi..im no tech guru but useing my Samsung tablet android i can see the images.....please try another browser or device or the usual advice to clear your caches.....Steve
Steve
1969 S2 2+2 & Building a C type replica
Show post links
Top

#18 Re: Cracks in the sills at the door corners.

May be a coincidence, but I’ve just fitted my new Sky Broadband server this morning to replace my old Sky one and now I can see the photos !
Cheers,
Dave
Dave Rose
1967 Series 1 4.2 FHC
Show post links
Top

#19 Re: Cracks in the sills at the door corners.

We are at the mercy of the Postimage servers. Bear in mind this is a free service so slow downs can occur. Of course it could be related to Thanksgiving and Black Friday IP traffic rush as quite a few US hosted sites were slow to respond over the holiday.
David Jones
S1 OTS OSB; S1 FHC ODB

#20 Re: Cracks in the sills at the door corners.

Mine is an old machine, still using XP and I can see them

The third picture down of the B post and bottom of the rear wing seems to have a curve to it; the filler is thicker by the door post than at the wheel arch. Also the last picture looks like very crumbly lead.

In my opinion this leading does not look good. Leading is relatively easy to do (except on flat panels) and is much more resistant to flexing than filler and it can even be raised or lowered by panel beating with no risk of becoming detached.

The outer sill is welded to the inner sill in these areas and also to the A and B posts + the rear wing and panel between the door and bonnet, so little flexing should occur.

I would be checking the welding under that lead.