I have replaced the headlamps bulbs with 2 LED from Bettercar lighting ( very impressive upgrade) and now i can't switch between high beam and dipped headlights ! the light stand on high beam
I have not modified anything in the dash, i have only taken off the H4 and connected the LED with the same 3 blade connector
Any idea ?

Yves, doesn’t Gil at bettercarlighting have an E Type? Have you asked him?

Does the high beam pilot go On and off in response to moving the dip switch? If so probably not the switch....I'd remove both bulbs and then see if the dip switch turns the pilot on and off as it should. If it does then the probability is either some sort of wiring....probably earthing....issue at one of other bulb or a faulty bulb....
Julian the E-type man
1962 FHC
1966 MGB....fab little car too
Show post links
Top

I have tested the earth : ok
The bulbs on the bench with a generator : ok high and low
The wires at the socket : 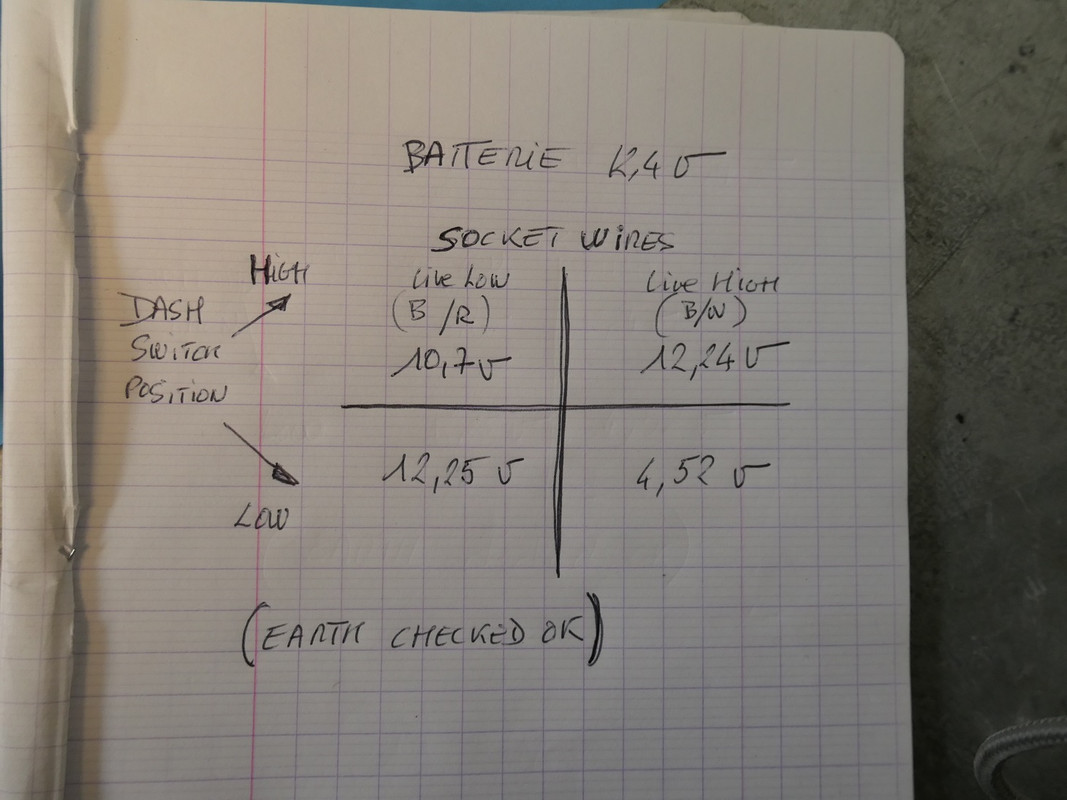 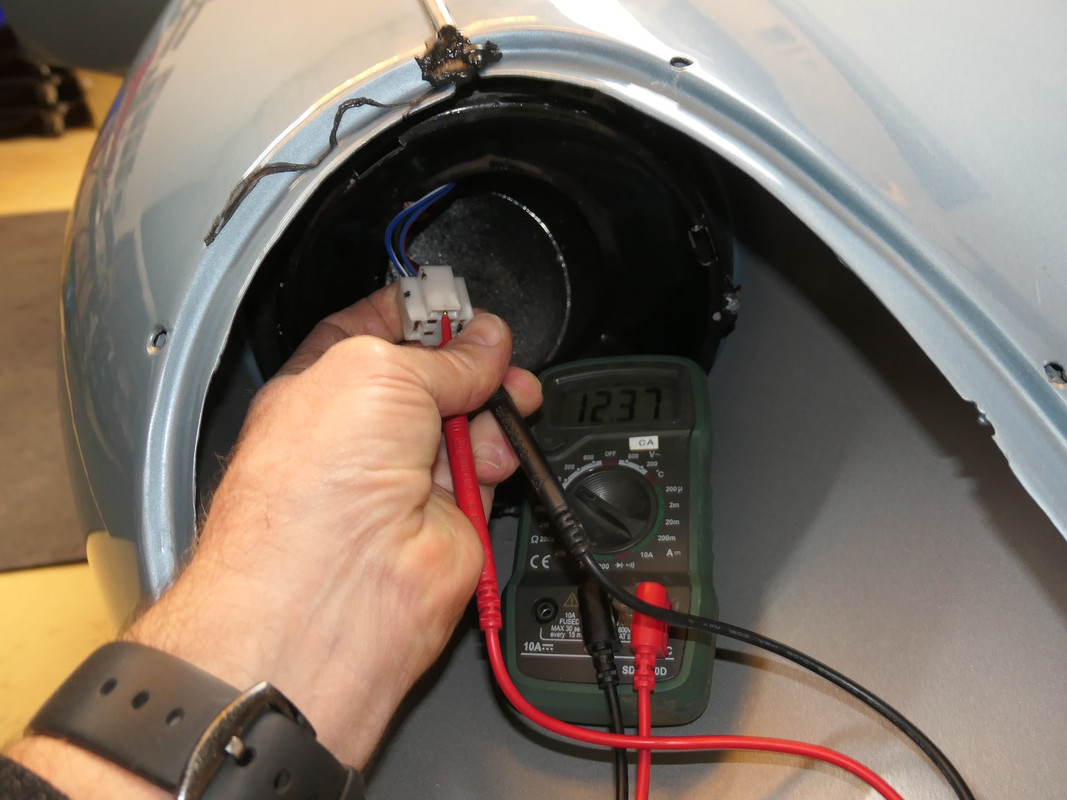 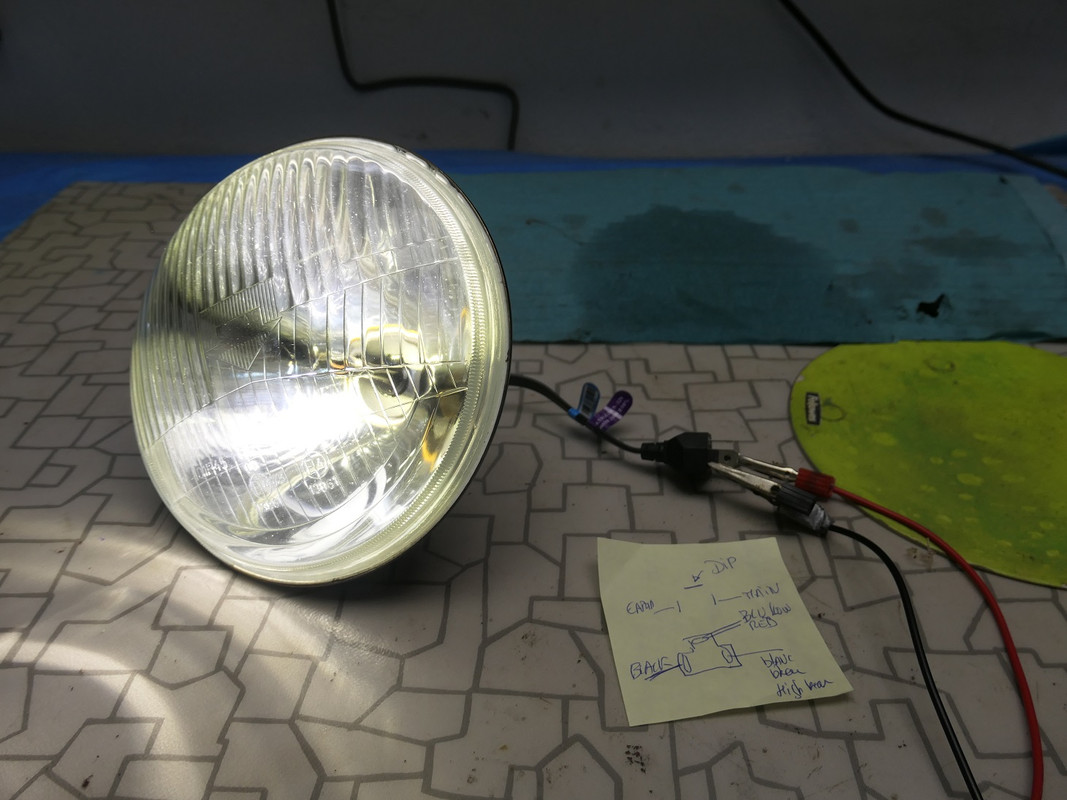 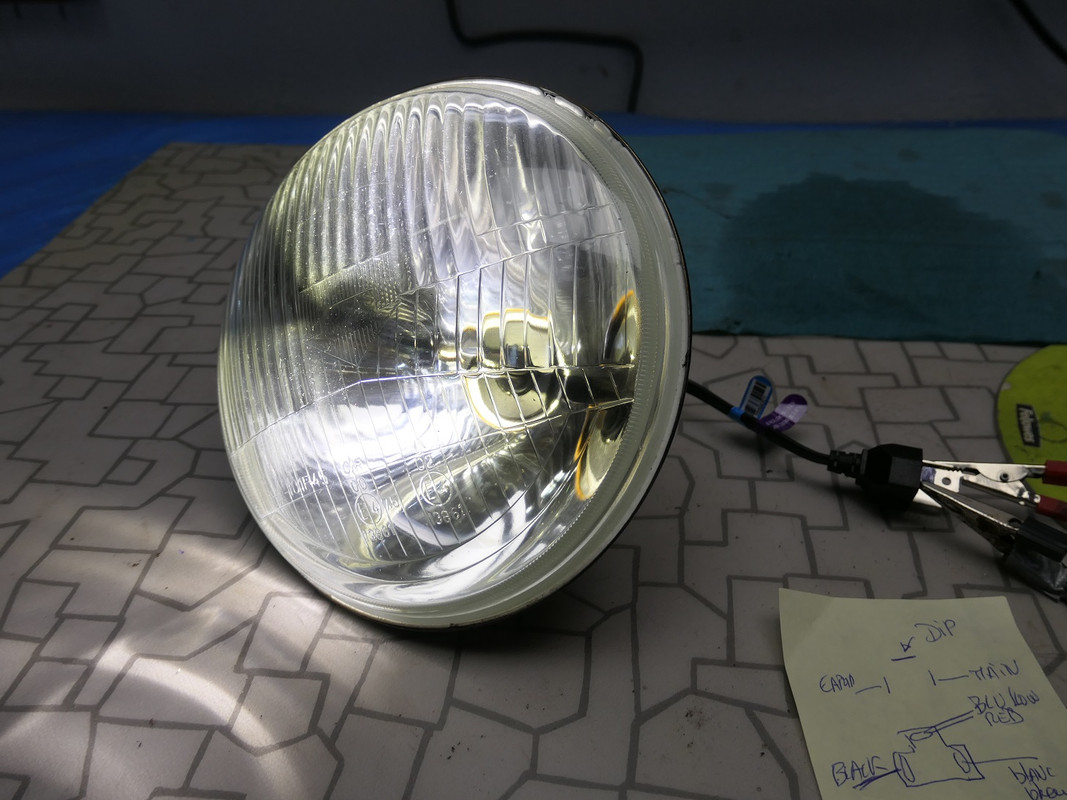 Drop an email, or call Gil. He’s always sorted out any issues I had with my led upgrades.
Richard

If the bulbs work on the bench it suggests the problem is not the bulbs but some anomaly elsewhere in the wiring system...
Julian the E-type man
1962 FHC
1966 MGB....fab little car too
Show post links
Top

I have tested all the dash wiring and all seems normal... the bonnet wiring is ok until the bonnet plug .
But when i test the live wiring between high and low beam ( Blue /White and Blue /red ) with the bonnet plug disconnected i find 111 Ohms ! between those two wires . It seems anormal but i am not sure that this resistance is enough to explain the LED issue ?
I can't ask Gil at BETTERCARLIGHTING, he is off for christmas

May be some electrical expert knows ? 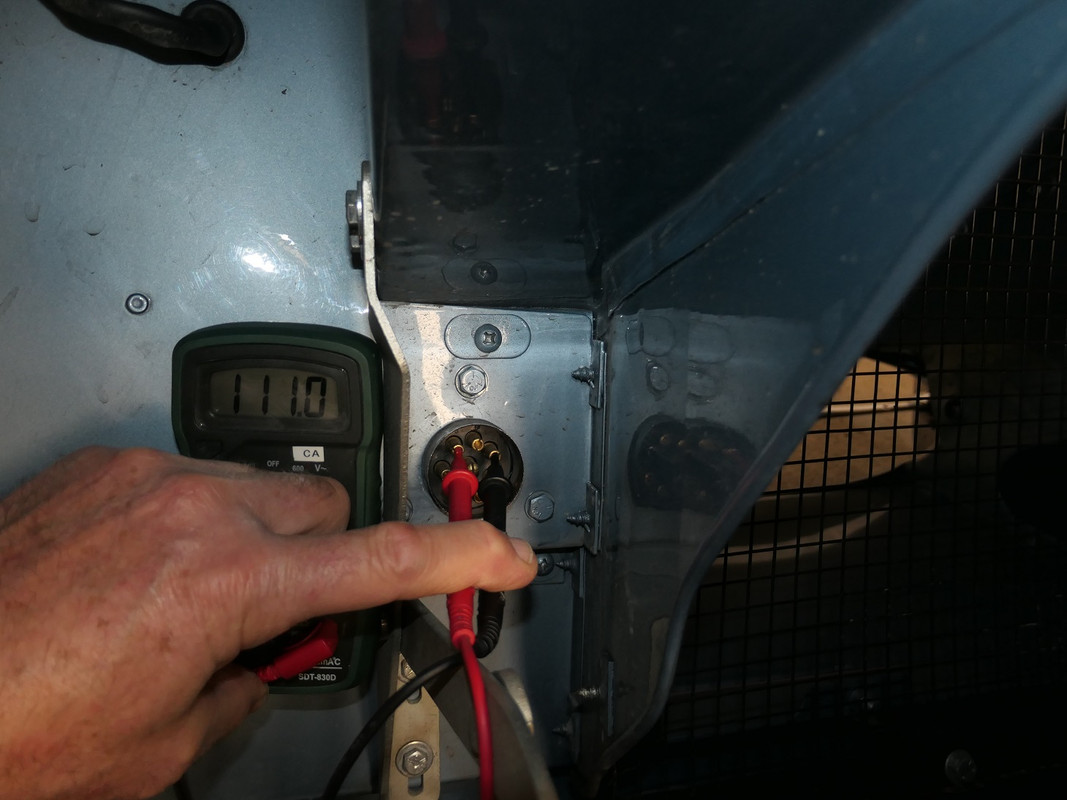 Hi Yves.....yes as Mike posted above and this could explain why you have different voltage on the high and low beam terminals.....check the high/low voltag on the bonnet plug with it disconnected looking back to the swtich.....Steve
Steve
1969 S2 2+2 & Building a C type replica
Show post links
Top

Measuring resistance between the two filaments feeds is not necessarily going to prove much as you may be measuring a resistance due to path created by another load on on or other side and all loads are combined at ground. 111 ohms May be entirely correct....Or if course it may not...Better to isolate wire sections entirely then test from one end to the other for continuity and either end to ground for insulation. I would do as Steve suggests and test voltages at the plug. Then I would do the same with both bulbs out at the light fittings. Then I would put one halogen bulb in and test at the other socket...voltages should be similar to with no bulbs although a bit lower. I would also measure the voltage between the ground lead at the bulb socket and the ground at the battery...there should be very little...any more than half a golf or so and you have a raised ground at the bulb and that may point to a grounding issue...!
Julian the E-type man
1962 FHC
1966 MGB....fab little car too
Show post links
Top

Julian as you suggested i have tested the earth between the bulbs socket right and left and the battery : fine no resistance .
But the test between live high beam or low beam and earth on the bonnet plug ( electrical harnest plug disconnected of course) shows a resistance of 195 Ohms in one case and 151 Ohms on the other ...!
I think that may be the problem is there in the bonnet wiring connections . 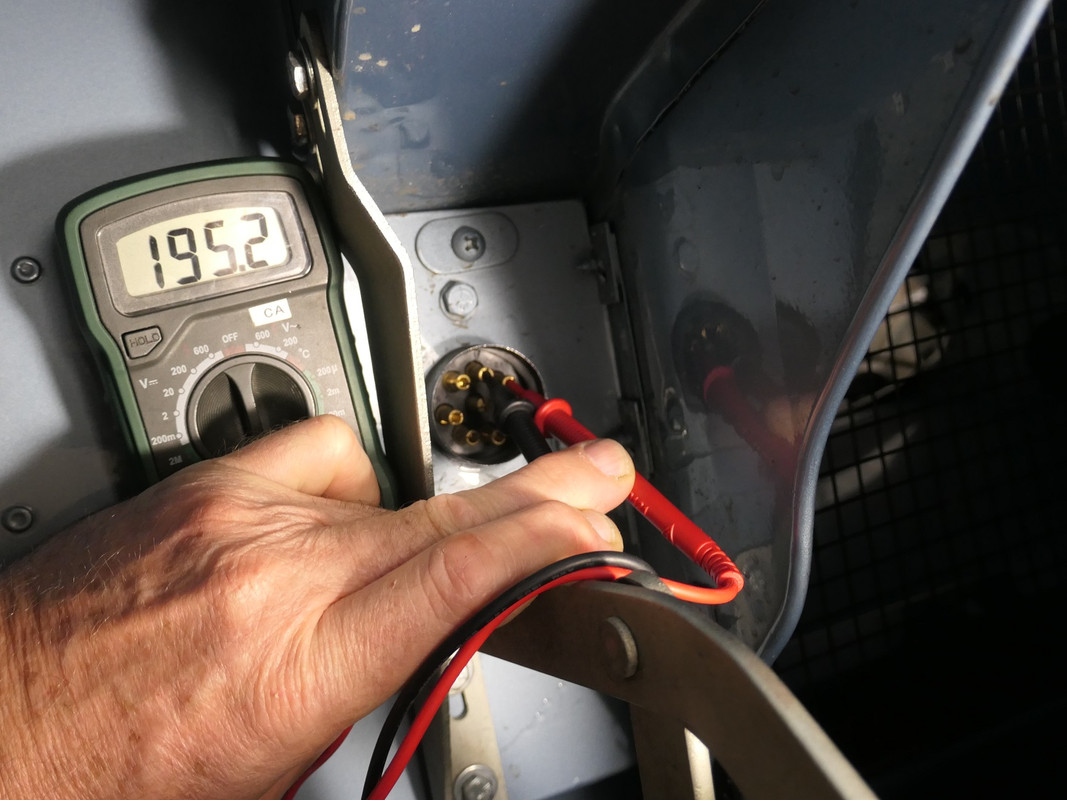 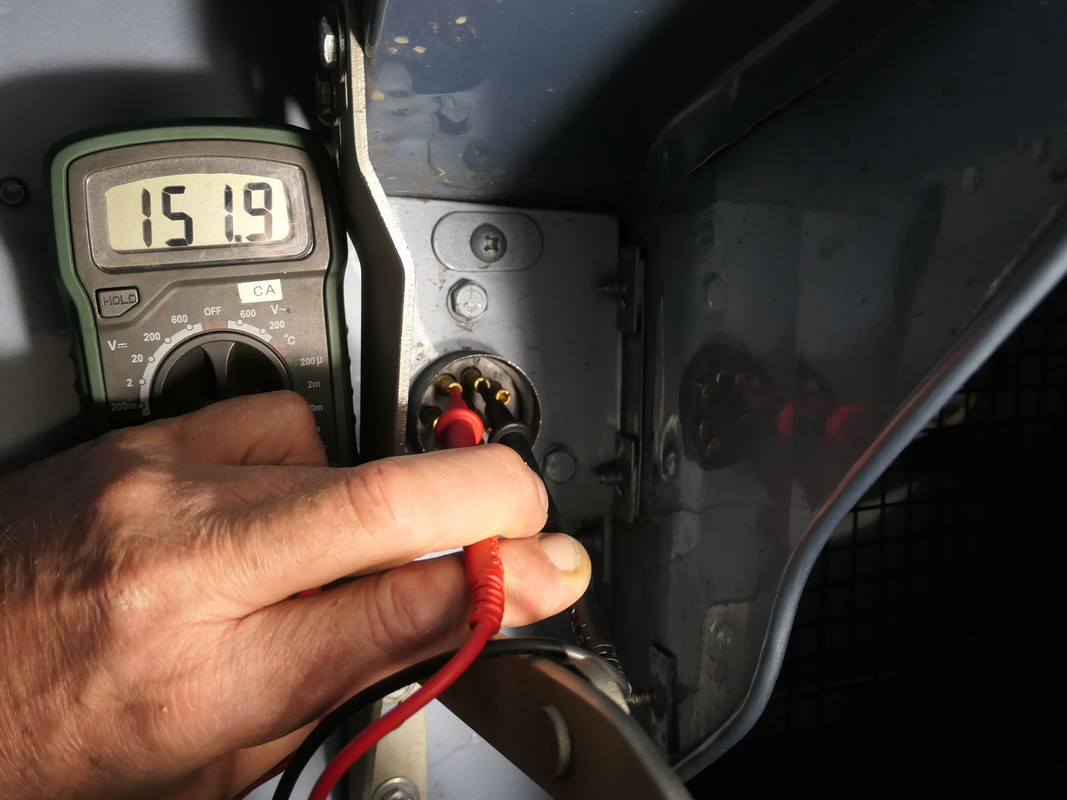 Is that with no bulbs present? If so then something is odd. If you have the bulbs in then between high or low beam and earth there will be a resistance of not much with halogen bulbs....with LED bulbs it will depend on the drive circuit for the LED elements.
Julian the E-type man
1962 FHC
1966 MGB....fab little car too
Show post links
Top

Well this evening , i decided to go in the bonnet wiring ....

tomorow if i have time to...! i'll investigate each wire resistance ! may be the light will appear in my mind ? 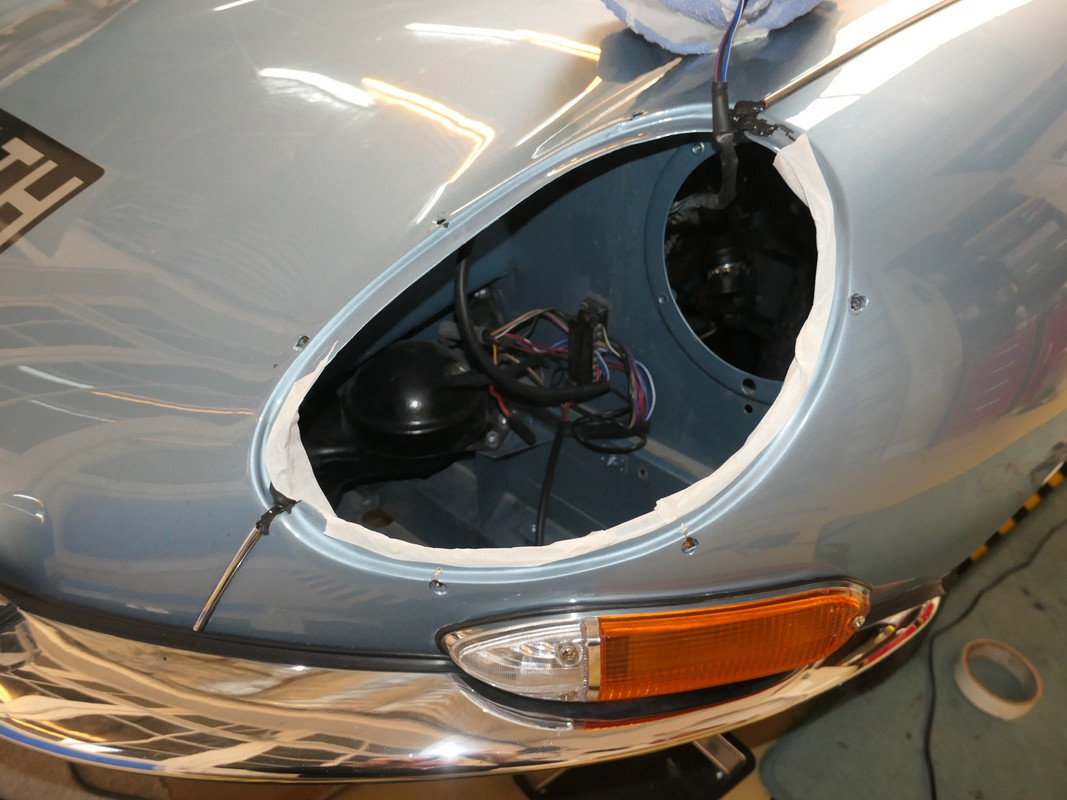 You may need to remove the other sugar scoop as well to check the smaller wiring connector.
Mike

are you testing with the engine running? LED bulbs have a switch on voltage, drop below that and no lights. I fitted a third brake/reversing light LED board and it did not work causing much head scratching. it was only when I started the car and the alternator kicked in they illuminated. One of the problems using LED bulbs!
David Jones
S1 OTS OSB; S1 FHC ODB

David , i realized that i was blocked on high beam during a drive at night before the french curfew with all the trucks dazzled me

And the problem is the same engine stopped or not

i tested the bulbs on the bench with a generatorr and they begin to light around 7.5 v.
Mike: i test step by step from the plug to the bulb socket......

For information, in today's Newspaper:

"A leading eye surgeon has called for a change to the law around aftermarket LED and Xenon car headlights, claiming that the units pose a serious road safety risk. Dr Ali Mearza says that the poor fitment of the ultra-bright lights can easily “blind” drivers, especially those with existing eye conditions, increasing the risk of an accident. He believes that the law around vehicles is outdated and needs to be urgently revised to take into account the third-party LED and Xenon conversion kits widely sold online.

Dr Mearza, founding partner of the Ophthalmic Consultants of London clinic, said: “From an engineering point of view, both LED and Xenon headlights have a clear advantage over conventional halogen bulbs – they’re much, much brighter. "Factory-fitted LED and Xenon lights will of course be perfectly tailored to the weight and height of the car they’re being used in, not to mention road-tested to ensure they illuminate the road brightly but safely. "However kits are also being sold online which allow the owners of older cars to swap their existing halogen lights for LED or Xenon lights. If poorly installed, the light beam produced will be angled too high, and will shine into the eyes of the drivers of oncoming traffic. Badly adjusted conventional headlights are bad enough, but the additional power of these new lights is the difference between dazzling and blinding.

“Even if it’s only for a few seconds, the consequences of driving while unable to see could be disastrous.” Dr Mearza added that while the problem of being dazzled by poorly adjusted headlights is bad enough for drivers with perfect vision, it is even worse for people who wear glasses or contact lenses, especially if their prescription is out of date. “The laws around these powerful new headlights are woefully out of date,” he continued. “The principal piece of legislation – the Road Vehicles Lighting Regulations – dates from 1989 and thus makes no mention of either LED or Xenon headlights as they weren’t around then.

Headlight aim is one of the criteria that MOT testers inspect vehicles for, but these tests are only conducted once a year on cars aged over three years, so they may not be catching all badly installed lights. The internet is full of online retailers giving conflicting advice about which lights are legal and which are not. If there’s any consensus, it is that retrofitting LED headlights is usually illegal, while installing Xenon lights can be legal but only under strict conditions.

Either way, with such confusion the solution should be blindingly obvious. The law needs updating and clarifying urgently.”
David Jones
S1 OTS OSB; S1 FHC ODB

In spite of what Heuer says.

There is obviously some interaction between the high beam and low beam wiring when the LED bulbs are connected to the car connector. It may help the investigation to power only main or dip LED individually.

Refit blue/yellow wire and remove blue/green wire from dip switch. Switch on headlights and operate dip switch. Do you have only main beam and nothing on dip?

Report back your findings. We will solve this problem!!!
Mike