I have bought an E-type Which is imported to Denmark from California. It is fitted with a sunroof with a type plate from Weathershields LTD. Birmingham, 5. England. I can see that the sunroof is fitted in the car by a company called Hilborn Top Shop INC. in Los Angeles.

My question is. Do you know that kind of sunroof? is it made for the E-type? I am going to restore the car completely And I have doubts whether the sunroof should be removed, and get the roof rebuild like it was when it left the factory. or i should let the sunroof stay. The most easy thing will ofcause be to let the sunroof stay.

Weathershields were made by Britax/Webasto in the UK. Suggest you try these people for spares: http://www.bristolsunroofs.co.uk/index.php
David Jones
S1 OTS OSB; S1 FHC ODB

Hi and welcome
As David says they were made by Britax and were pretty highly regarded in the day....an upmarket sunroof, they were fitted to Jaguars, Astons and Bentleys, as well as the MGs and others.

It's obviously a personal choice whether or not to keep it...I certainly would. It gets quite hot in an E type with a tin roof. As you can get kits to refurbish them and there are specialists who will repair them, it's also the cheaper option than filling the hole.

Yours looks to have been recovered internally with some rather nasty black material. The original roofs tended to match the headlining usually in a pale grey or beige colour . In the 1970s I had one in my Triumph 2.5PI and found it was very successful apart from being noisy . I had a Webasto ( a slightly more expensive equivalent ) in my FHC for many years, and it undoubtedly made the interior lighter and airier . However, there were two problems, the first of which was probably specific to me and would not bother everyone

i. It had a 50mm deep wooden frame which restricted the headroom - I have a very long body and short legs and thus find this a problem
**Edit : I see yours is a 2+2 and from experience of a friend's car this does not arise with a 2+2

ii.there was considerable wind noise particularly with it shut , at any speed over 50mph/80 kph

When I had my car rebuilt, I had a new roof put on, but changing it is a difficult and expensive business .

Thanks for the answers :)

When i bought the car in May 2010 i was determined to remove the sunroof, but i do also know that it is a difficult and expensive thing to do.
And maybe it could be i nice thing to have when it is summer. I can imagine that is has been nice to drive in it with the sunroof open in California back in the sixties 8)

When i opened the sunroof in the garage i saw the manufacture plate on it. I could see that it was produced in England and thought that it could be something original for an e-type. was it possible to order a new e-type with sunroof fitted directly in the factory, or is all sunroofs for the e-types fitted after they left the factory?
Live in Denmark. Just bought an E-Type 1967 2+2 4.2 litres.
Show post links
Top

It was not a factory option as far as I know.
David Jones
S1 OTS OSB; S1 FHC ODB

Hello,
Going through this forum I stopped t this post back from 10/11 about sunroof,
Here is couple pictures of sunroof out off my 2+2 .
what do u all think about it .manufacturer (?) or is this someone added at their home garage ?
Thank you all. 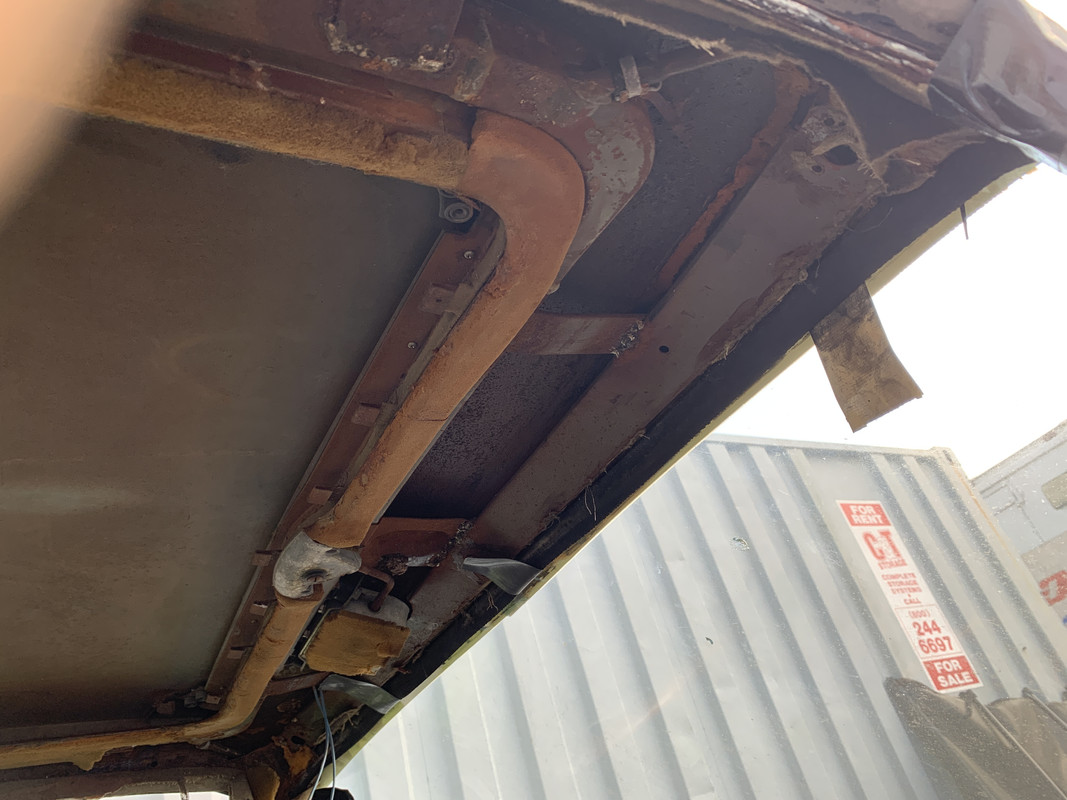 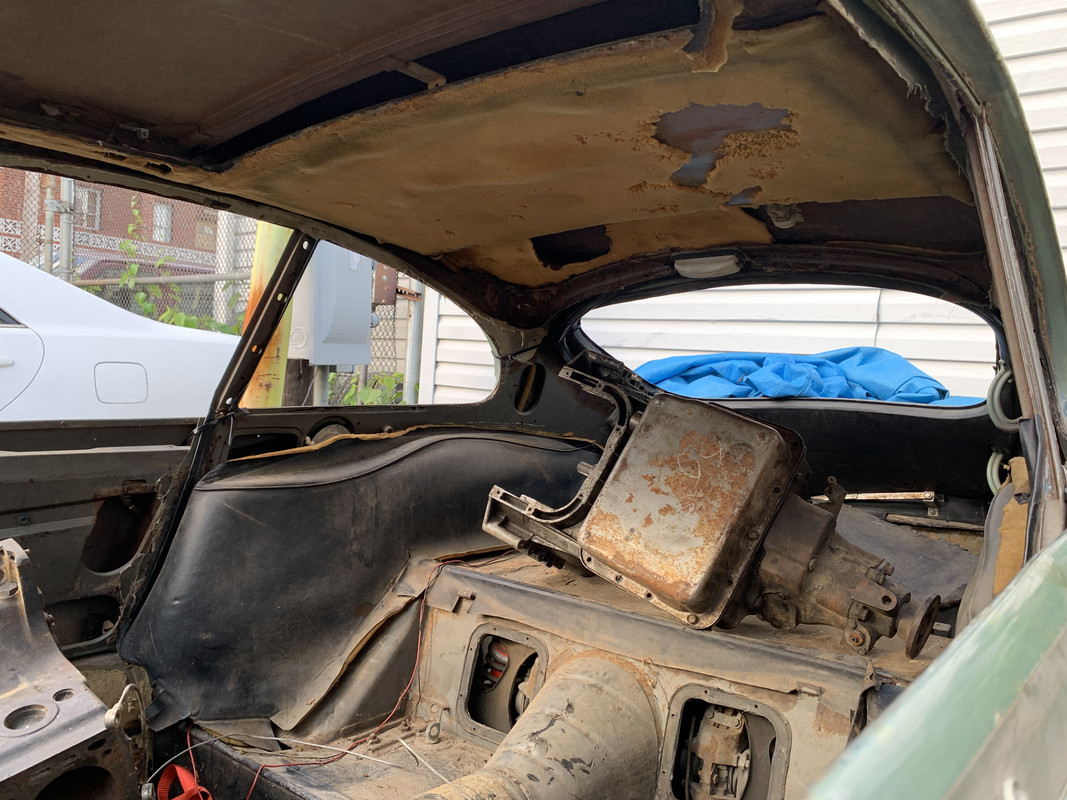 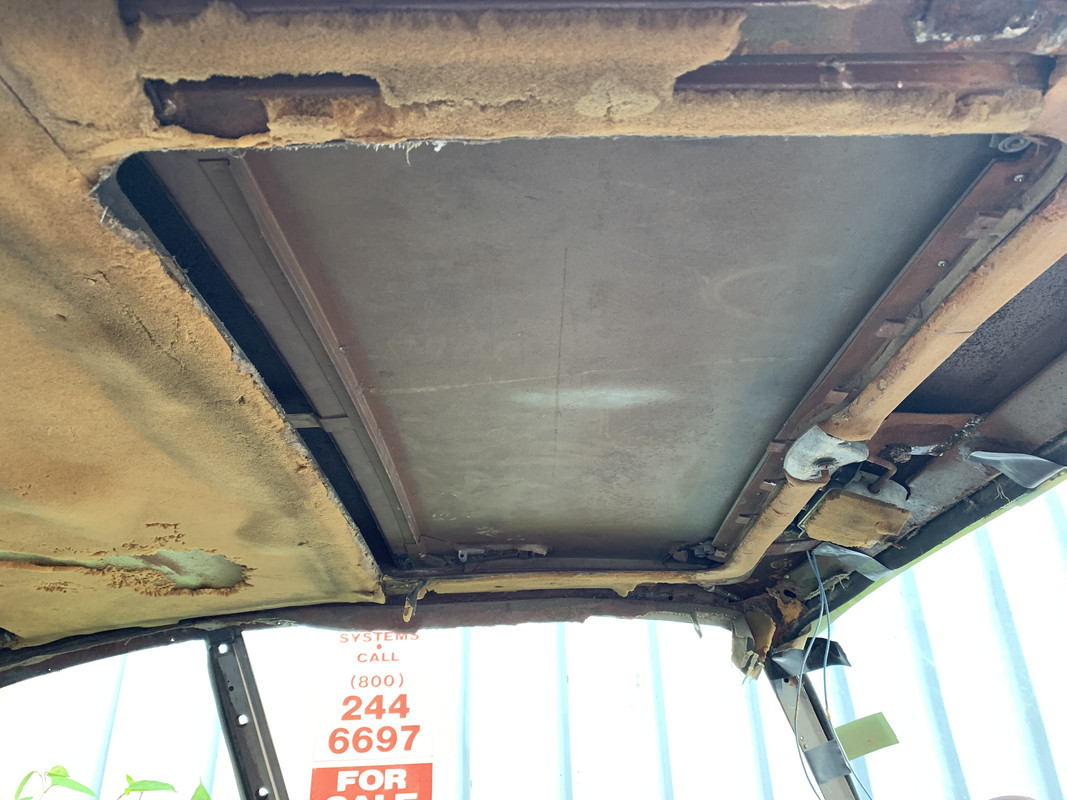 If that is a metal roof, then it is most likely to be one of the very rare factory fitted sunroofs
Show post links
Top

Webasto did Retro-fit electrically operated steel sun roofs to a variety of cars including Rollers. I once saw a S2 2+2 with such a roof, nicely trimmed as if it was in a RR.
Chris '67 S1 2+2
Show post links
Top

I used to fit sunroofs for many years from mid 70's to mid 80's. Your roof looks very similar to the Hollandia sunroofs that I used to fit (But earlier), however, they were held into the roof by clamping a metal jig inside and ontop of the appeture then hmmering about a half inch down then using a hand folding crimp to finish the appeture edge off and fold under the sunroofs appeture effectifly holding the roof in place. Two brackets were then riveted to the cant rail, drain tubes fitted and trimmed out. I NEVER have seen any welding involved in sunroof instalation, so to me it looks like the front brackets have been added at a much later date for I have no idea what!

The idea of the steel sunroofs was to make it look 'Factory fitted'.

I fit Hollandia roofs to: Jaguars, Roller's, Bentley's, Rover's etc for main dealers from Sotland down to the midlands. (There were only two agents in the UK, the other being in Clapton, London)

It would be an easy job to refurb your roof and recover/trim the black clamping rails or even to hide them under a new headlining if your up for that! Also do not use silicone as a sealer under the rails as it tends to seperate with the body movement, use body caulking or the modern equivelent as it stays flexible but keeps the water out.
Steve
Technical Adviser to a

Hello Gents,
Thank you all for very helpful info, quest of finding more info continues ..got few more pictures of the roof out of the car and there is a tag!! Let me know what u think about this find. Thanks 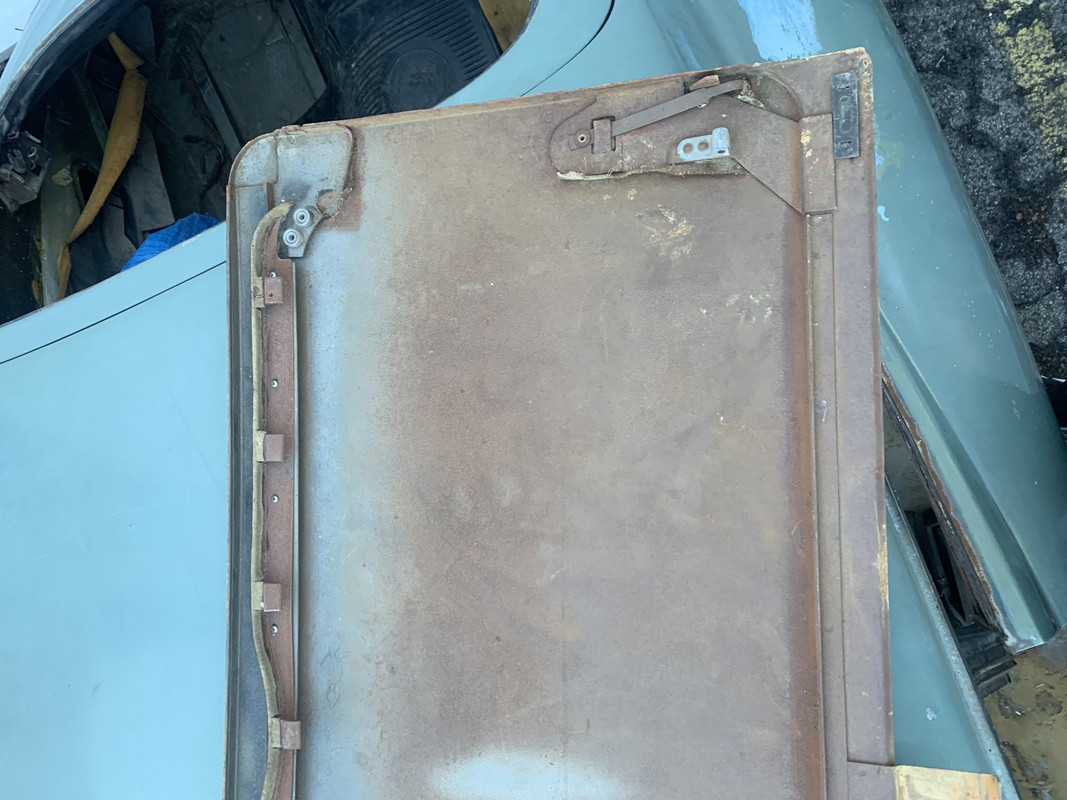 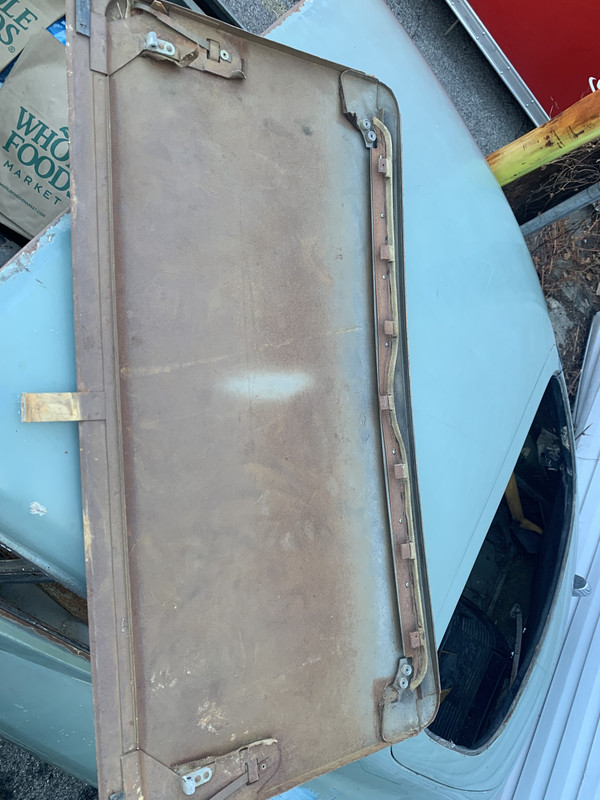 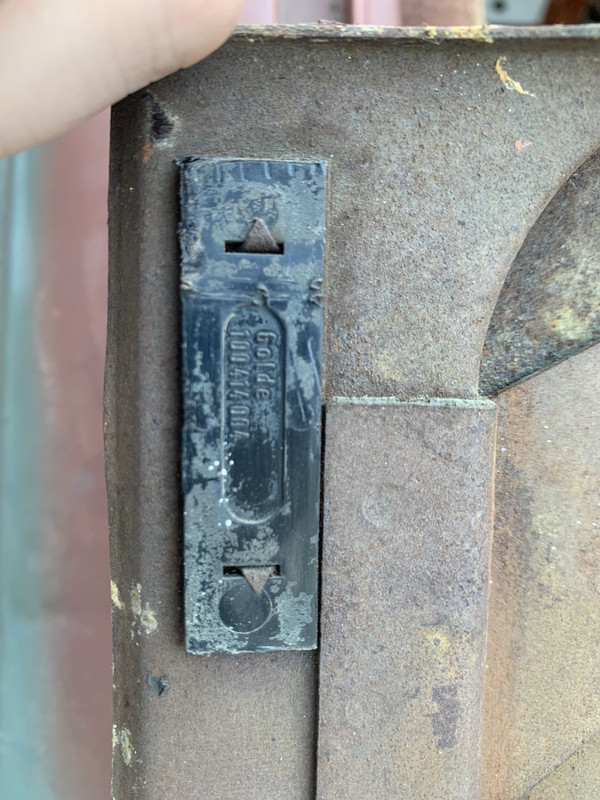 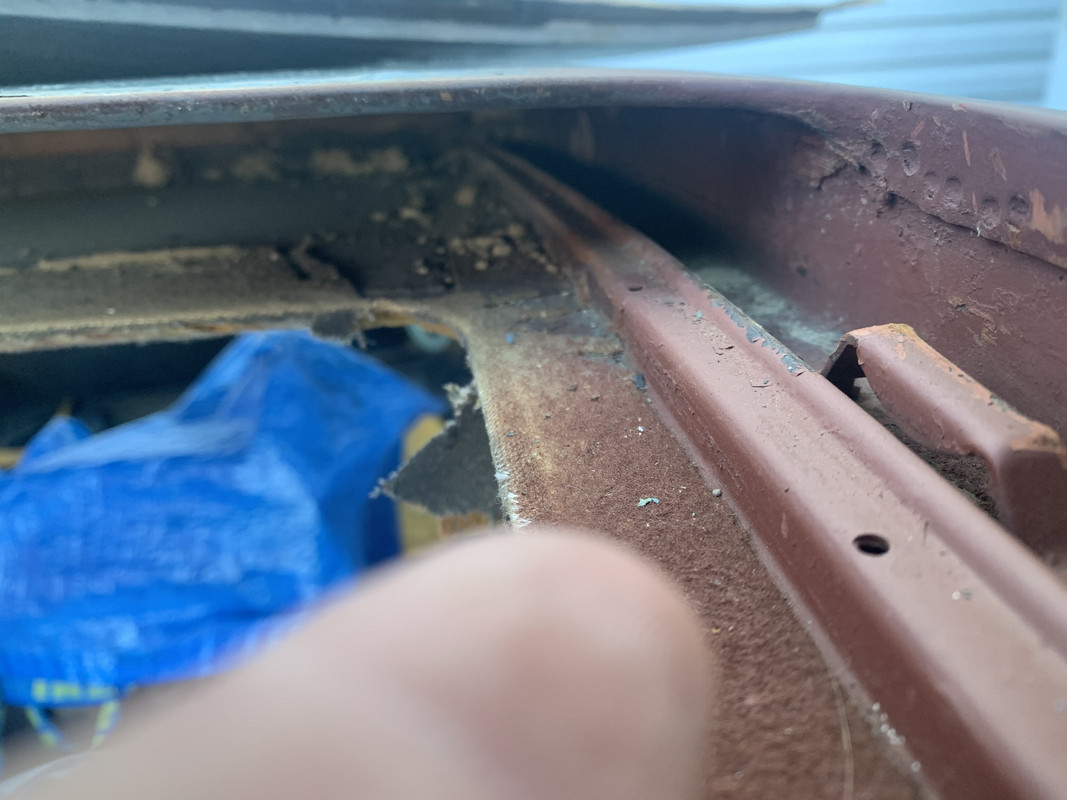 Yep, it's an early Golde roof, if memory serves me, they were later fitted into FORD motor cars as a factory fit, first one I can remember working on was a MK1 Granada estate, yours looks like the manual type but the later type were operated by a winding handle (Wire cabled) at the front near to the rearview mirror. They are/were good solid roof's.
Steve
Technical Adviser to a

Thank you Steve and Joe for this very helpful information.
First thing that comes to mind is whatever i will be able to get it fixed and get the correct parts. That worries me a little i must say.

Talk to you soon,
Petr
Peter