I have Elle (my name for her due to her reg number) in for a bonnet respray at present, removing a dent and some bubbling on the seams and generally tidying her up. My question is in relation to the numberplate (another reason to have the bonnet done as the existing setup failed the MOT this year) is there a standard positioning

Popped into garage this evening and took the following picture, they have shot blasted and found previous repairs have been made with lead and brazing which has reacted causing the bubbling. 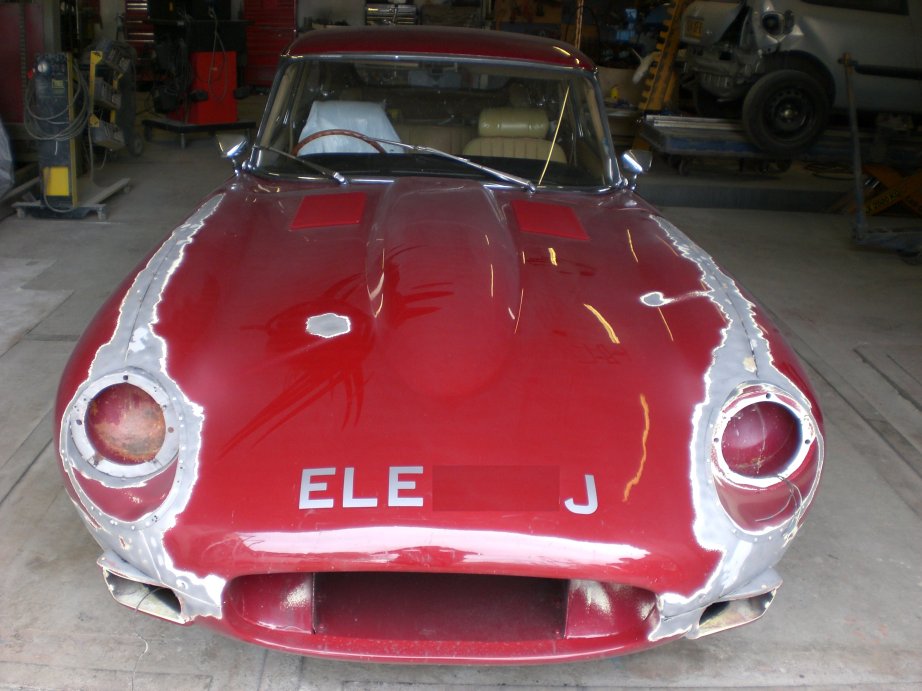 As far as I know there is no 'official' location for the plate especially given there is no real reference point with all those curves. Have a look at some original pictures and wing it!

To give yourself time to play use some 'green' window cleaner e.g Mr Muscle. Spray liberally on the sticky bit and you will then be able to maneuver it into position. When you are happy run a paper towel over the plate to squeeze out any remaining liquid and leave over night. This stuff works better than soapy water as it evaporates quicker.

The reason for failure looks to me to be that no background has been used. For your 1971 reg car, this can be either white or silver letters on black, or black on white reflective . The position can be anywhere within reason, but is usually a few inches further back than you show in the photo
Show post links
Top

Heuer wrote:As far as I know there is no 'official' location for the plate especially given there is no real reference point with all those curves. Have a look at some original pictures and wing it!
David

When I bought my car it had a new bonnet fitted but no front reg. plate.
I made enquiries as to the 'official' positioning of the plate but got no difinitive answers. The DVLA said that the plate/numbers could be in accordance with the rules appertaining at the date of registration as shown on their website. The position of the plate then as now had to be on a vertical surface!
I emailed them asking if the front plate of an E Type was legal if it was a stick-on type on the bonnet. The answer was that it was legal providing that it conformed to the rules. This didn't tell me anymore than I already knew because the rules say it must be vertical.
So I don't know what the answer is although there are a lot of maybe non- legal Es about.

The question about the E-Type front number plate has been circulating for years. The JDC asked the DVLA for a definitive statement on the subject and they did get back with a definitive reply. Can't find the article but basically the DVLA think the E-Type was given dispensation in 1961 to display the number plate on the bonnet and "custom and practice" means it can continue to do so providing the colours and fonts comply with the appropriate legislation. They also say the only reason this has been queried in recent times was because of the increased use of ANPR and speed cameras by Police. The E-Type number plate is considered visible by these systems so no action will be taken.

Interestingly the use of square number plates (with two lines of characters) on the front of a car, as seen on many Impreza Turbos and Mitsubishi Evos, does constitute a breach of regulations as SPECS speed cameras cannot read them - they can only read octagonal single line plates (and only in one traffic lane, by the way). The plates on C-Types and D-Types (offside underskirt) are probably marginal but given their rarity on the roads are not considered a problem (i.e. the potential financial gain).

My plate is approximately 6" down from the leading tip of the power bulge if that is of any help.

P.S. If SPECS cameras concern you consider changing lanes between each one of a pair of cameras. They are only type approved to measure speed in a measured straight line in one lane (guess which!). They work in pairs and cannot resolve square style number plates.
David Jones
S1 OTS OSB; S1 FHC ODB

#6 Re: Self adhesive numberplate positioning

ANPR cameras can't see black & white plates. Reflective plates are covered with glass hemispheres. The camera shines an infra-red beam down at an angle from above onto the number plate, and the hemispherical glass beads reflect light in all directions, including back up to the camera. So ALL the camera sees is the reflective portion of the number plate, with the numbers & letters in silouhette. It then reads the numbers & letters by OCR, and compares them to the database. If you don't have reflective plates, the camera sees nothing at all - you are literally invisible.
Hugo Miller - rebuilding an imported Series II OTS & converting to RHD
Show post links
Top

#7 Re: Self adhesive numberplate positioning

What about SPECS, Gatso and Truvelo camera's amongst many others? As far as I know the IR is only used at night and the camera's will capture whatever they 'see' in daylight.
David Jones
S1 OTS OSB; S1 FHC ODB

#8 Re: Self adhesive numberplate positioning

#9 Re: Self adhesive numberplate positioning

I know of one E-Type that has black digits stuck directly on the bonnet. And another that has no front number plate at all. Both are MOT'd each year. It depends on the tester.

As for ANPR cameras, I know that they have difficulty reading closely spaced digits, at least the one fitted to an unmarked BMW did a few summers ago.
Chris '67 S1 2+2
Show post links
Top

#10 Re: Self adhesive numberplate positioning

Mine too is about six inches down from the end of the power bulge. White letters on a mat black background. MOT man has never queried it.
Julian the E-type man
1962 FHC
1966 MGB....fab little car too
Show post links
Top

#11 Re: Self adhesive numberplate positioning

There is a Jaguar service bulletin detailing exactly where the front plate should be mounted. Details in 3.8 Factory Fit.

#12 Re: Self adhesive numberplate positioning

Hi
Just before I make a mess I thought that I would ask the question...probably for the nth time.
I have ordered and received a self adhesive number plate from Jepsons for the front of my car.
I have seen the advice on here about either Soapy Water or Mr Muscle window cleaner to aid with placement and alignment but when I asked Jepsons for any tips they told me to apply the numberplate to a clean dry surface??
Having struggled with various screen protectors in the past I don't much fancy the idea of doing it without any chance of adjustment so can someone just confirm that I am ok to peel the backing off the plate and spray with Mr Muscle window cleaner and crack on.
I can't see me being able to place the numberplate right first time without adjustment.

#13 Re: Self adhesive numberplate positioning

A friend started his apprenticeship at a Jaguar dealer and for his first task he was given the job of placing the number plate on the bonnet of an E-Type. When done he thought it wasn't quite straight so he pulled it off. Along with the top coat of paint! His advice was do not under any circumstances put the number plate on dry. It will go on squint or with bubbles of air or a crease.
Chris '67 S1 2+2
Show post links
Top

#14 Re: Self adhesive numberplate positioning

Hi Dean...think you have to recheck what you have ordered...was it from a manufacturer that others on the forum have used and recomended...if not than you may have a plate that has adhesive on the back that needs to be stuck down.....the ones ive seen put on are not sticky on the back and use soapy water as said above...give Framptons a call and see what tbey sell http://www.framptonsplates.com
Steve
1969 S2 2+2 & Building a C type replica
Show post links
Top

#15 Re: Self adhesive numberplate positioning

Ok will do thanks for the advice btw thought that Framprons plates came from Jepsons anyhow?
Show post links
Top

#16 Re: Self adhesive numberplate positioning

Apply lots of soapy water to the bonnet, not the plate. Sticky plates won't stick until you squeegee out the water, before which you can slide them around to adjust the position. Beware wrinkles if you use a part of the bonnet with excessive compound curvature. Once fitted, if there are bubbles you can either work them towards the edge, or prick them with a pin and flatten down.
1E75339 UberLynx D-Type; 1R27190 70 FHC; 1E78478; 2001 Vanden Plas
Show post links
Top

#17 Re: Self adhesive numberplate positioning

I use window cleaner from a spray bottle. Easy to control and it evaporates quicker than water but gives you plenty of time to position.
David Jones
S1 OTS OSB; S1 FHC ODB

#18 Re: Self adhesive numberplate positioning

As per David and Peter's instructions, when I have applied decals in the past, I mask out the position with a 10mm gap all round and then apply the decal. This way it is much easier to line up with the masked out profile as a reference . I mask it slightly bigger to allow for sliding the decal about and squeegeeing (sp?) out the excess soapy water.

#19 Re: Self adhesive numberplate positioning

Thanks for all the advice but still confused over whether my number plate is the correct type after previous reply saying that it shouldn't be sticky??
Doesn't the soapy water/window cleaner affect the adhesion of the plate? You can't put a plaster on a wet finger and get it to stick?
Show post links
Top

#20 Re: Self adhesive numberplate positioning

Hi Jivili.... I can't say whether you have the right plate or not, but I can say it's pretty standard practice to use a liquid solution, such as water and minimal detergent spray, or even a proprietary version, to help affix vehicle livery and logo's. The solution allows you to position it correctly, and as the water evaporates, the adhesive then bonds with the surface - it allows you to get exact positioning, and done well, will leave no trace. No, I'm not recommending it, as water and a drop of washing-up liquid will do as well, but see
1967 Series 1 OTS
Show post links
Top
Post Reply Previous topicNext topic
30 posts