I'm new to forums so please bear with me!

I have a 4.2 fhc series one undergoing full restoration.
I have rebuilt the engine and recently started it for the first time. It was a slightly difficult birth, I had the ignition timing out by one plug but once that was sorted the car fired up. All seemed ok but due to a faulty otter fan switch the fan did not cut in and the car boiled its water and threw a lot of water out. When I tried again the car started and seemed ok. It has now run in total for probably an hour and each time starting it has got harder - the engine needs churning over for ages before reluctantly starting. Until this week it seemed to be running ok once started when it seemed to be down a cylinder so I did a compression test and found no compression on no3 cylinder and only 60psi on the others. I borrowed a cylinder leakage kit to explore further and found that no3 was leaking into 2&4 and all others were leaking. At this stage I decided to remove the head and found that the head gasket has failed between all 6 cylinders. There is evidence of oil in the bores but little evidence of burning oil - no blue smoke.

The engine has had all the machine work done professionally and includes honing cylinders - original standard pistons with new rings, crank regrind mains and big ends,head decoke surface grind, 6 exhaust valve guides and seats , reface all valve seats and 6 valves ,new exhaust valves etc.
I built the engine myself as carefully as i know how but now have this problem.

A professional engine builder has seen the head and thinks oil may be coming past the new rings and suggested pouring petrol on top of the pistons to check for leakage. I have done this with running in oil and 10/40 oil - no leakage, with petrol just covering the crown of the piston, the petrol takes approx 8 minutes to leak away. This didn't seem bad to me but he thinks it is and suggests taking the engine out and starting again. This is obviously the last resort as the car was due to go to the trimmers this week until this happened.

I,m sorry for the long epistle but thought you would need the facts if you are to be able to help. If you have any thoughts or advice it would be most welcome to a very dispirited enthusiast.

The odds are that the basics are still fine assuming you flush with clean oil etc. Keep it simple. Replace the headgasket, time the valves and ignition properly and check the compression again after you've run it briefly.

Keep the valves clear of the bench if you have the cams fitted. Do check the head face for flatness. Assuming you did not fill the header tank full (which would overflow even at normal temps) the engine should have survived a bried overheating episode in the workshop.

with all 6 cylinders showing signs of cross leakage in such a short time of running and the fact you've had the head skimmed i'd suggest first checking the block surface if it has'nt been decked,also looking at head studs bottoming out in the domed head nuts,have you fitted new studs? correct washers?was it a payen gasket?-and carefully inspect the failed head gasket for even clamp pressure marks --let us know what you find.

I'd check that the head is still true, put on a new head gasket and see how it goes. You don't really have that much to lose; if the engine has has other heat damage it's stuffed anyway. If it's OK then away you go.
The otter switches can be unreliable. A lot of people set up a manual bypass switch to the fan relay so they can switch the fans on whenever they want. The heated rear window switch (rightmost one on the dash) is a perfect choice if you don't actually have a rear window heater.
I hope it all turns out well; I can imagine how I'd be feeling in your situation.
Andrew.
881824, 1E21538. 889457..oops. Jezza the V12 XJS race car.
http://www.projectetype.com/index.php/the-blog.html
Adelaide, Australia
Show post links
Top

As Steve 3.8 says, this failure has to be a consequence of insufficient clamping force . His advice about checking for the studs bottoming out in the dome nuts is very important . I should get a digital caliper and use it as a depth gauge ensuring that with the D washers etc installed, the free length of stud exposed is fully threaded , and is at least 100 thou less than the depth of the dome nut threads . As far as the pistons are concerned, I prefer your view to that of your mechanic - I doubt that there is anything significantly amiss . However, re-ringing is at best a dodgy business, so don't be too disappointed if the engine uses oil - and anything better than 150 miles per pint is quite normal - even the best will only do 300 mpp or thereabouts in most running
Show post links
Top

Thanks guys, I have checked cylinder head studs for length compared to the height of the head and all seems well. Will check again when engine man has rechecked the head. The gasket does have signs of compression all along so I feel it leads back to the head. The block appears to be flat can only check with a simple straight edge at the moment. The studs are the original but all new domed bolts and washers. With the domed bolt on I have measured the distance from the underside to the block and there appears to be approx 3mm of clearance so the head should nip up ok. Gasket was supplied as part of head set ( and bottom end set ) by E type specialist. does't appear to be a dodgy supply.

The engine machine shop checked all components before machining and advised not to have new pistons but to rering so that's what I did.

Hi guys
Interesting topic
Short stud 4.2 S2 engine my cylinder head has been skimmed twice to my knowledge ,am I going to have problems getting sufficient pressure when tightened down due to Studs bottoming out on dome nuts
To get round this problem would it be safe to have thicker head washers machined or would this affect the compression rate or Would it be better to get thicker cometic head gasket
All advise would be mush appreciated
Cheers Larry
Last edited by Bellhelmet on Mon Jan 25, 2021 7:16 pm, edited 1 time in total.
Show post links
Top

Some repro acorn head nuts do not have as much depth of thread as originals.....also as a S2 i would think you have a long studs that go through the water jacket....if the studs have come out its also not uncommon for sludge/muck to go down the stud hole and then the studs not being able to be screwed in enough....so carefull checking is required.....Steve
Steve
1969 S2 2+2 & Building a C type replica
Show post links
Top

If your engine really is S2 then it will be a long stud engine. The easy way to tell is that the long stud engines have 5 core plugs on the exhaust side . Short stud units only have 3 . You can certainly obtain extra thickness gaskets, which are often used amongst other reasons to restore the correct compression ratio after either block or head has been shaved. Others will be able to direct you, or a call to SNGB will probably help you. Shaving should not usually result in such an erosion of clearance that the studs bottom out in the dome nuts, but with the head on but not tightened down you can check the protruding length of each stud against the available depth in each dome nut , and if need be use 2 washers . The much more usual cause of loss of clearance is unscrewing of the studs and/or ingress of crud into the threaded bosses into which the studs screw
Show post links
Top

Did the machine shop check for any highpoints around the, I surmise short cylinder head studs?
My Dad had to have the blocked skimmed on his early 4.2 as well as the cylinder head as the compression was effectively trying to pull out the studs and created quite a few high points around the stud holes that required machining.
The head also had several hairline cracks between the water jackets which required welding.
I understand that there are multi layered head gaskets now available as opposed to the single layered originals, which may also help.

Previous owner rebuilt car but never finished or tightened anything, resulting in vernier disc ( mine was the 4 quadrant disc which I believe jaguar only used for a year or two rather than the full disc) having not being tightened or lock wired slipping causing exhaust cam to go out of timing ,luckily the valves only just touched pistons causing very slight bend to valves and damaged guides but a full head rebuild called for and as you start you might as well refurbish many other parts Rad, starter motor, brake master , and a nice new set of Burlen triple Su’s ,exhaust manifolds goes on
The previous owner had spent so much new interior, floors, steering, suspension, brake callipers ,servo , wheels tyres ,but just skimped on other bits
Car was a US import on Strombergs 🤪
Show post links
Top

Bellhelmet wrote: ↑
Mon Jan 25, 2021 6:47 pm
Hi... my cylinder head has been skimmed twice to my knowledge ,am I going to have problems getting sufficient pressure when tightened down due to Studs bottoming out on dome nuts?
To get round this problem would it be safe to have thicker head washers machined or would this affect the compression rate......

The washer setup cannot affect compression ratio, only clamping force if the nuts bottom out.

For hard use, bling doesn’t decrease you lap time, it only adds a potential failure mode, so I machine away the dome from unchromed long stud nuts. 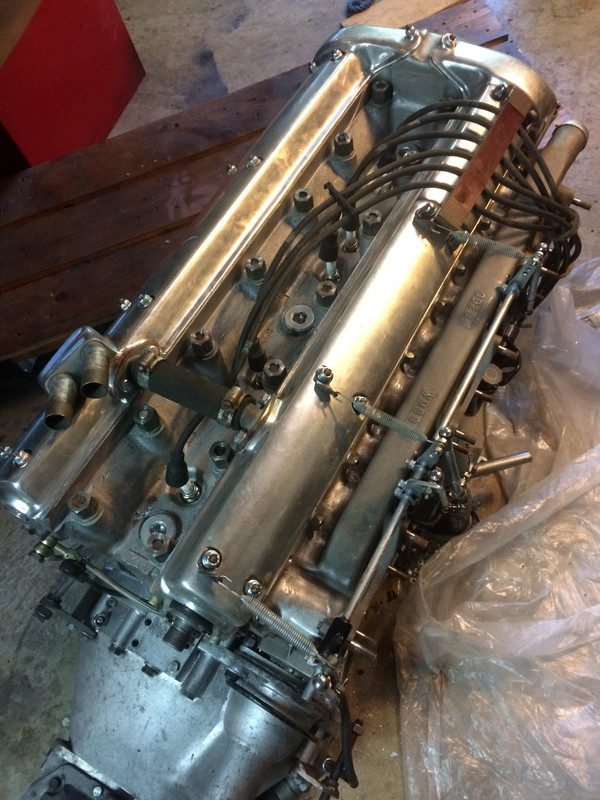 Tim do you know if your block was ‘decked’ (machined flat) dusting the engine refurb? If it was it is essential that the timing chest cover was in place otherwise the head cannot be pulled down flat.
Just a thought
Show post links
Top

The OP started this thread 9 years ago, posed twice and has not been back since.