I have a 1962 UK RHD FHC which seemed a little low on the front end. After measuring the standing height I established it was approximately 3/4" (approx. 20mm) too low from the measurement shown in the Green Jaguar Service manual.
So I decided to adjust the torsion bars. I followed the procedure shown in the manual and all was going well. The rear adjuster levers were removed and then the setting gauges, which were drilled to the recommend centers of 45.25cm were installed to the shock absorber mounting points.
The problem I had was when the rear adjuster levers were installed back on the rear splines both the bolt holes and the torsion bars lined up in its original position which I had marked with white tippex prior to their removal. This indicated to me that if I continued to re assembled everything nothing would have changed.
I spoke to a fellow E-Type owner, who is quite knowledgeable and he said take the setting gauges off and make some new ones with hole spacings further apart.
I wasn't too keen on doing this as seemed a bit hit and miss and to re instate the front suspension only to find out the measurements were still wrong isn't that appealing.

Is there a more scientific approach or have I missed the point???
Thanks Alex
Show post links
Top

What it indicates is that the bars have gone a little soft, which they do.

Someone did recently post some calculations which showed how far you need to move splines for a certain height change but I found them bamboozling. I was also not sure that if the bar's elasticity had changed that this wouldn't make the calculations inaccurate anyway.

What I would do is set the bars as you have using the link, then move the rear spline one tooth further on and see what that does to your ride height. Bit trial and error, but it should work.

abowie wrote:What it indicates is that the bars have gone a little soft, which they do.

Not a great choice of word Andrew. They may have 'taken a set' but they aren't softer and the spring rate will not have changed measurably. That's why you adjust them, instead of throwing 'soft' ones away like valve springs. Actually, if you're meticulous you adjust valve springs too (with shims) but that's a separate issue


abowie wrote:What I would do is set the bars as you have using the link, then move the rear spline one tooth further on and see what that does to your ride height. Bit trial and error, but it should work.

Moving the rear spline 'one tooth' gives a huge change, but finding the next two splines that fit both ends gives you a fraction of a 'tooth' change, which is what you want. If it was one spline further round there'd be little point using vernier adjustment.

Peter, you're probably right WRT "set" although I'm not sure how you could easily tell whether the bar has become twisted or lost spring, but the end effect is the same for ride height with the car just sitting in the garage.

What Peter says about amount of movement is correct, although I have done exactly what I described on a customer's car and it worked a treat.

Having said that, if one rear spline results in it being to high at the front you could go back, and then rotate the bar back one spline in the other direction at the front, or work out a ratio of say 2 rear and 3 front splines. What you would have to look for is the distance that the holes for the locking bolts on the rear teardrop are misaligned towards the middle of the car. If one rear spline is too much you should be able to work out how much less misalignment you need and dial that in.

You can buy new TBs, but they are quite expensive. Otherwise just get an adjustable tie plate.

abowie wrote:Peter, you're probably right WRT "set" although I'm not sure how you could easily tell whether the bar has become twisted or lost spring,

The way to tell is to know it can't happen.

Unless you have definite evidence of a heavy fire or mega surface corrosion/pitting then it hasn't lost spring rate (which is inherent in the dimensions and physical use). There is not enough displacement available in the suspension to take the bar beyond its elastic limit and the metal composition or dimension hasn't changed, ergo neither has the spring rate.

I suppose with unmarked bars you might be unlucky and end up 'un-scragging' a bar because it had been fitted the wrong side earlier in its life. But for any marked LH/RH you're safe. Which doesn't stop people parting with serious money because it 'feels' like they need to be replaced rather than adjusted. The irony, of course, is that new ones needs adjusting too, from scratch, and are an unknown quantity. You could even take the existing bars to a spring works and get the re-tempered and scragged.

PeterCrespin wrote:
The way to tell is to know it can't happen.


So a spring can NEVER lose it's spring?

Even Maryland is not the land of permanent spring. Maybe South 'stralia is better?

Heat, corrosion and bending beyond the elastic limit are all bad. If it wasn't for the fact that RHD cars also eventually list to starboard I'd even hazard a guess that downpipe proximity was a factor in so many over here listing to port.

However, in my limited non-metallurgist understanding, since the suspension cannot move far enough to stress the bar beyond its elastic limit, the actual RATE of a tb does not deteriorate if all it has done is taken a set. Hence deciding if it has or not isn't an issue and they generally need adjusting not replacing (sorry, vendors!).

So, if it is readjusted it will work fine and twist by the same amount under the same load as before. I.e. the bar hasn't lost its spring and is not 'soft', it has just settled to a new static position. High heat, heavy pitting and abnormal stress might cause spring rate or durability problems in a torsion bar, but not normal use ( AFAIK). One might postulate that a tb readjusted so often that it has twisted like a spiral from its original grain eventually becomes scrap, but I don't think that happens. Finding yourself dealing with swapped-sides would be a reason for replacement just to save the aggravation.

I think we did have a spring expert here one time - maybe he knows?

PeterCrespin wrote: Heat, corrosion and bending beyond the elastic limit are all bad.

What kind of heat would be enough to weaken a tb? Could powder coating (400F prox) be enough?
Craig
'68 E-Type FHC
Show post links
Top

IMO Pete is right, the elastic limit does not vary unless you change the microstructural state of the steel through metallurgical treatments.
But the TBs' settling does over time.

Btw strain also applies to springs.
That is why we see E-Types with a low rear because of worn springs over time. It is due to repeated microstructural evlution under stress leading to tiny permanent deformations that accumulate leading to progressive settling of the springs in a more saggy position.

Contrarily however to the TBs that can be adjusted thanks to the splines, springs have to be replaced at some point once too many washers can't be used to compensate for reduced height.

In principle, 400F should not detrimentally affect TBs (though it may require a different adjustment of splines), you need higher temps to substantially activate atomic diffusion in steel .
But I understand that some macroscopic strains can be observed on large thin steel pieces due to deposited heat, e.g. on bonnets subject to powder sanding. Also the case of aluminum parts because the melting temp of aluminum is much lower than steel's.
Serge
1964 (3.8) S1 FHC 889725
Show post links
Top

Can I move this in a slightly different direction. I ordered and fitted new uprated torsion bars from SNG and not thinking set the car up with the 17 3/4 inch bar. It is riding about 2 inches too high at the front. Is there a known dimension for the bar spacing to allow a more correct ride height other than trial and error. Presumably to set the bar 2" less than the recommended would make the car too low at the front?
I did think after engine was in and fluids etc it would settle more than it has. I was also expecting a slightly firmer front end and not a different ride height.
Can anyone help so I just have to redo it once please?

Hi George...there is no trial and error in setting the torsion bars......the details are in the Jaguar service manual very easy to follow.....you will need to make up setting links to position the car in the mid laden position then set the torsion bars... Steve
Steve
1969 S2 2+2 & Building a C type replica
Show post links
Top

Hi Steve
Have done all that if you read I have uprated torsion bars, Are you saying the setting for them should be the same as standard?

Hi George...sorry for that, did not appreciate you had uprated bars.......think as you suggest it will be trial and error to get the ride height you want.......dont know of any info that will detail what setting link you would need.....after all they are uprated for a firmer ride but to what specification ......all the best... Steve
Steve
1969 S2 2+2 & Building a C type replica
Show post links
Top

At least theoretically, you can calculate it quite easily using trigonometric functions. The triangle consists of the (horizontal) upper wishbone and the (vertical) distance you want to make your suspension lower or higher. They both form an angle, which you can adjust using the frt/ rear splines.
On the ser 1 you have 25/24, which equates to 14,4/15 deg.
For example if whisbone lenght is 20cm and height to be adjusted is 5,1 cm, this equates to an angle of 14,3 deg (arctan(5,1/20)). This would be almost one spline on the 25-side.
Otherwise you have to turn the TB a certain amount of splines on one side and turn back on the other until you get the desired difference in degrees (eg two splines on the 25 side (14,4x2=28,8 deg) minus one one the 24side (15 deg) = 13,8 deg. I have to admit that untortunately I have not yet tried myself. Anyway you need to measure wishbone lenght and desired height adjustment very accurately.
Mark
1963 OTS 880436
Show post links
Top

I have recently reassembled and set my TB, with the correct spacer.
But because I have the 205/70x15 tyres which have a smaller diameter than the original 185-15 tyres, my car is sitting lower.
Now as the rears are also 205 of course,the rear and front are lower by the same amount.
What is the collective wisdom of our forum ?
Raise the front to the correct height, or keep the car level but lower.

How can that be? Either fatigueness or wrong side?!
I could only find one marking on the two installed torsion bars of my S1 2+2. 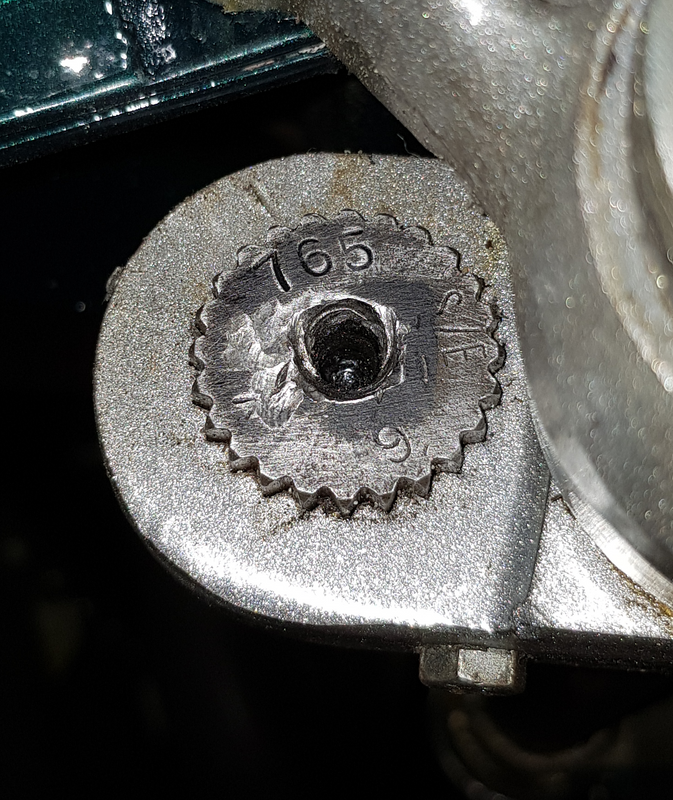 Please could anybody tell me what the inscription means?

I might go for a new replacement pair, just wondering who made any good experiences with suppliers and product.