Replacement Servo for Kelsey-Hayes on 3.8

#1 Replacement Servo for Kelsey-Hayes on 3.8

I first mooted this subject almost a year ago, without much success, and it now seems worthy of a new string.

I'd been struggling for some time with a Kelsey Hayes servo on a 1962 OTS, wooden pedal, lack of feeling, and above all an incurable tendancy for the brakes to stick on, whatever I did to the servo and its adjustment.

Knowing that they had always had a bad press, that nobody seemed able to supply bits, and that Jaguar quickly ditched them for a Dunlop, I was reluctant nevertheless to adapt a later one (which I think has a different pedal box ?) and spoil the engine-bay of what is a pretty original and well-restored car, thanks to the previous owner.

Rob Beere does (used to do) a remote double-ended servo kit that goes on the exhaust-side down on the frame rails ; it wouldn't look right (especially with its braided hoses) on my car, but it got me thinking.

The same servo is available from Stafford VC, and is made by what appears to be a fairly consequential Spanish brake-component manufacturer called Frenos Iruna www.irunabrakes.com ; SVC sell this model for all sorts of kit and classic-car applications, and they say that everyone uses it "without a vacuum tank".

This got me thinking that if you could indeed ditch the vacuum tank on the E-type, this would be a perfect place to stick a servo ..... 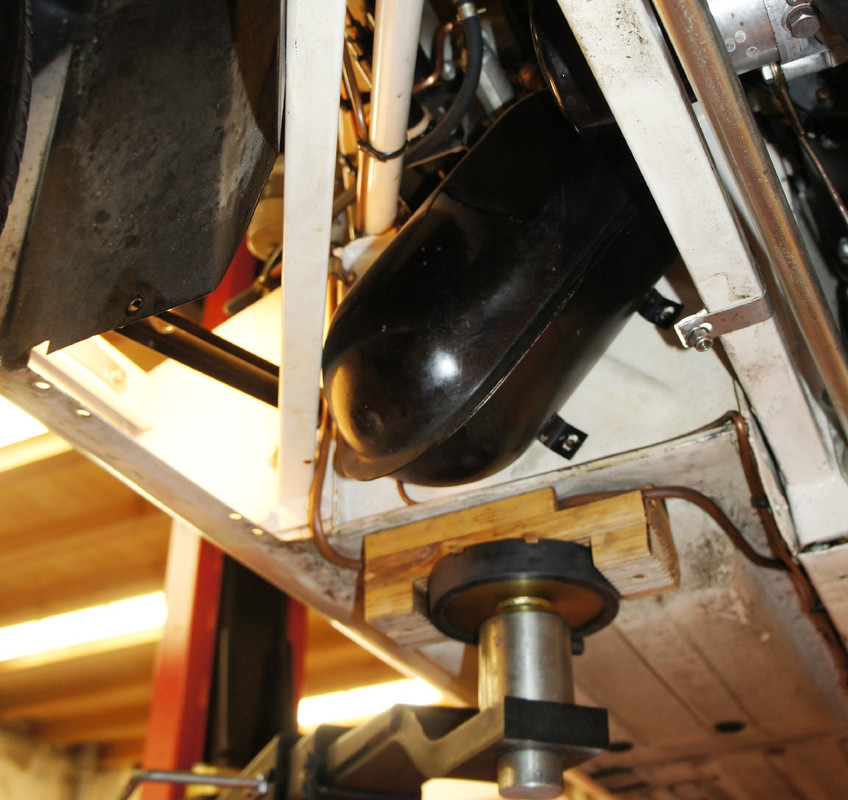 The tank acts - I imagined - both as a damper to smooth out supply and demand of vacuum, damping out swings in servo effort, and as a limited reserve in the case of both a failed engine and a failed drive-train, a failed motor still producing suck on the over-run.

SVC's dimensioned drawing looked plausible, so £300 later I was able to start judging where to put it and how to pipe it up ; I'll spare you the fitting details, there isn't a straight line on it and there are virtually no mounting points available. 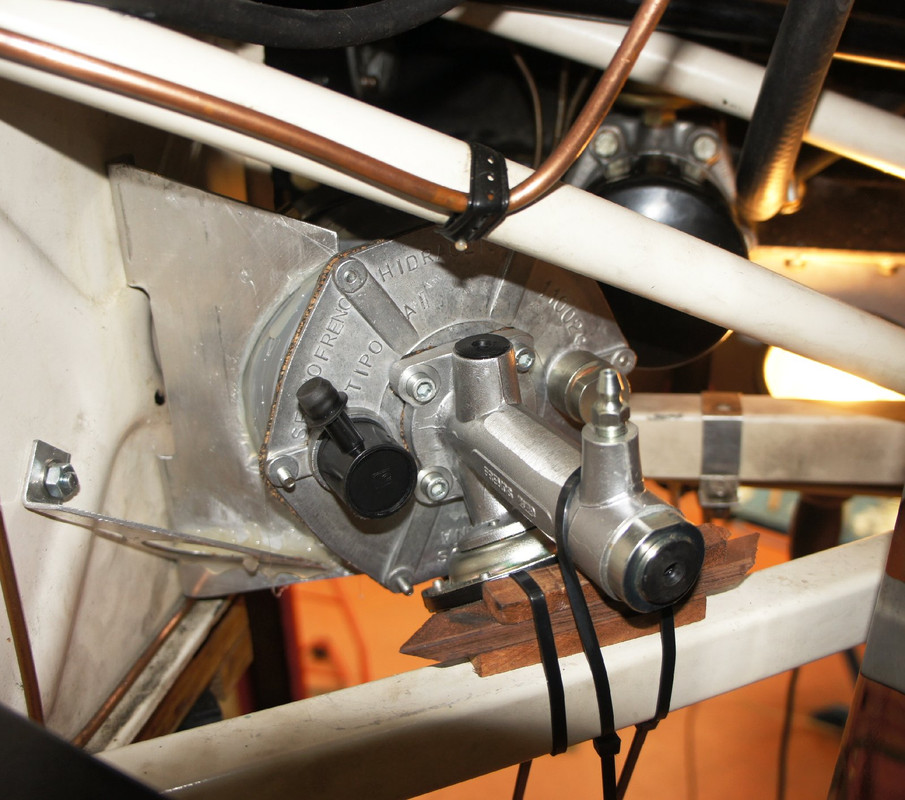 It would be possible to make some saddle clamps and fasten either end to the lower frame rails, but this would always have looked like an adaptation - Sayer and Lyons gave us elegance, and I feel we owe it to them to do what they might have done. 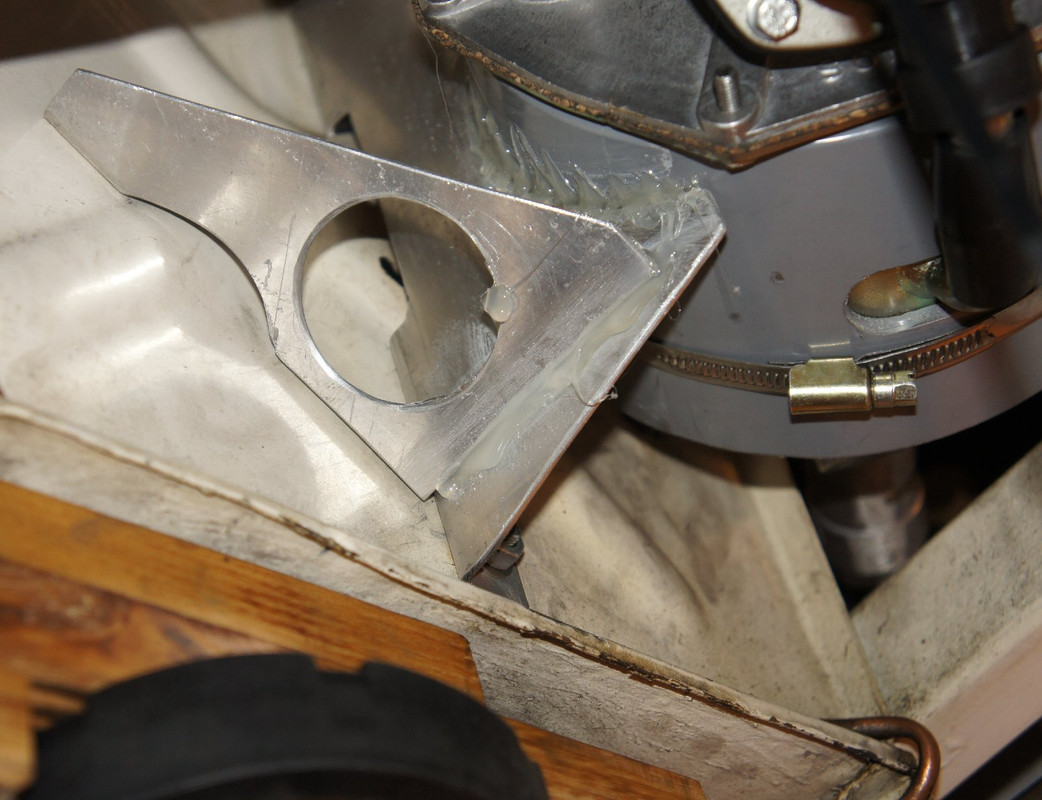 So it was out with the plastic drain sleeve, sheet alloy off-cuts, cardboard templates, and a hot-glue-gun, to make a support worthy of the header-tank cradle. 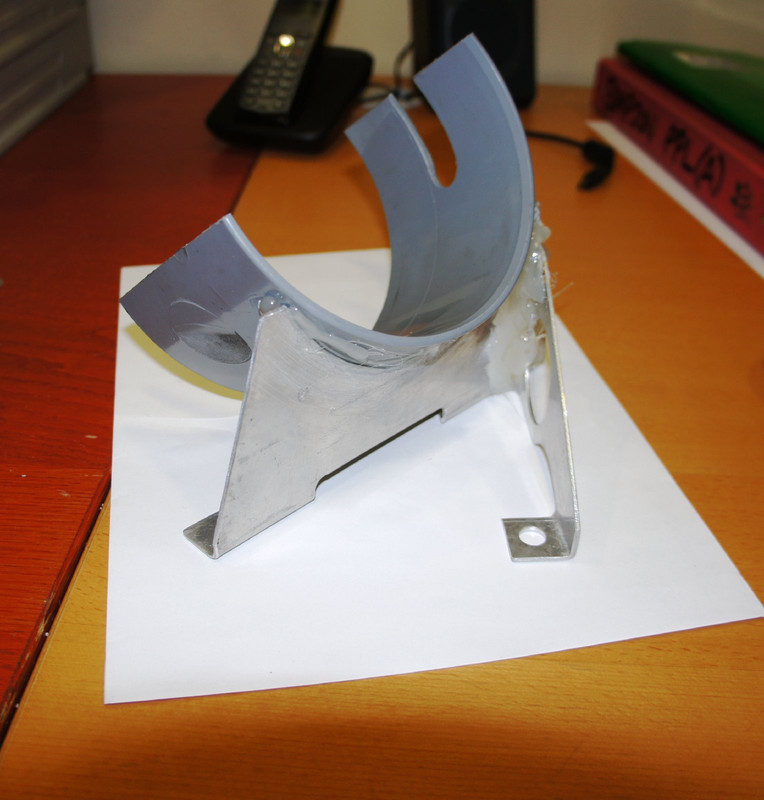 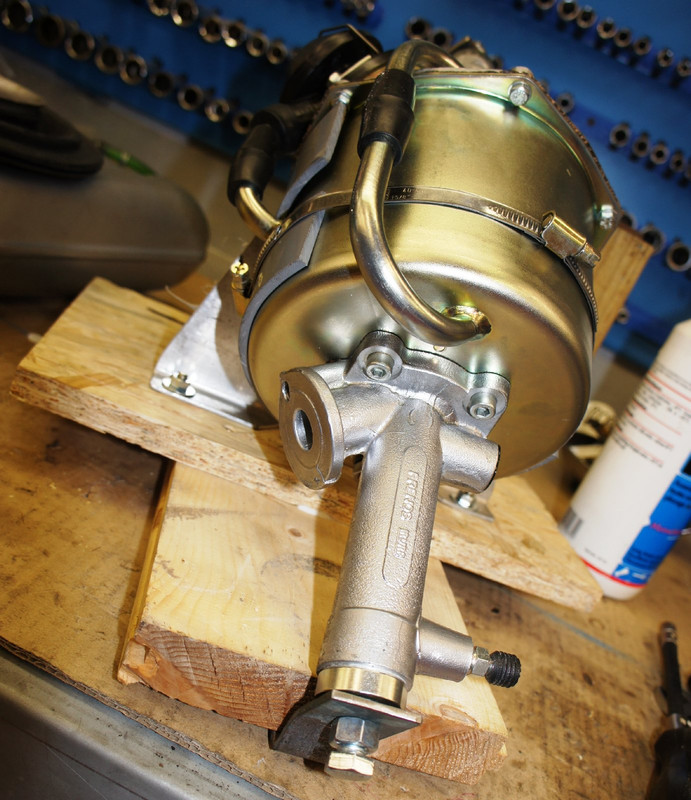 The space constraints are tight but not insurmountable, only my spin-on filter had to come off during installation, and neither the splash tray nor the air-filter housing are any where near to the servo once installed.

Once my mate Yvan (sheet-steel-and-TIG-genius) had turned my mock-up into stainless - check out the detail on his clamping straps - the final version was bolted onto the original vacuum tank mountings. 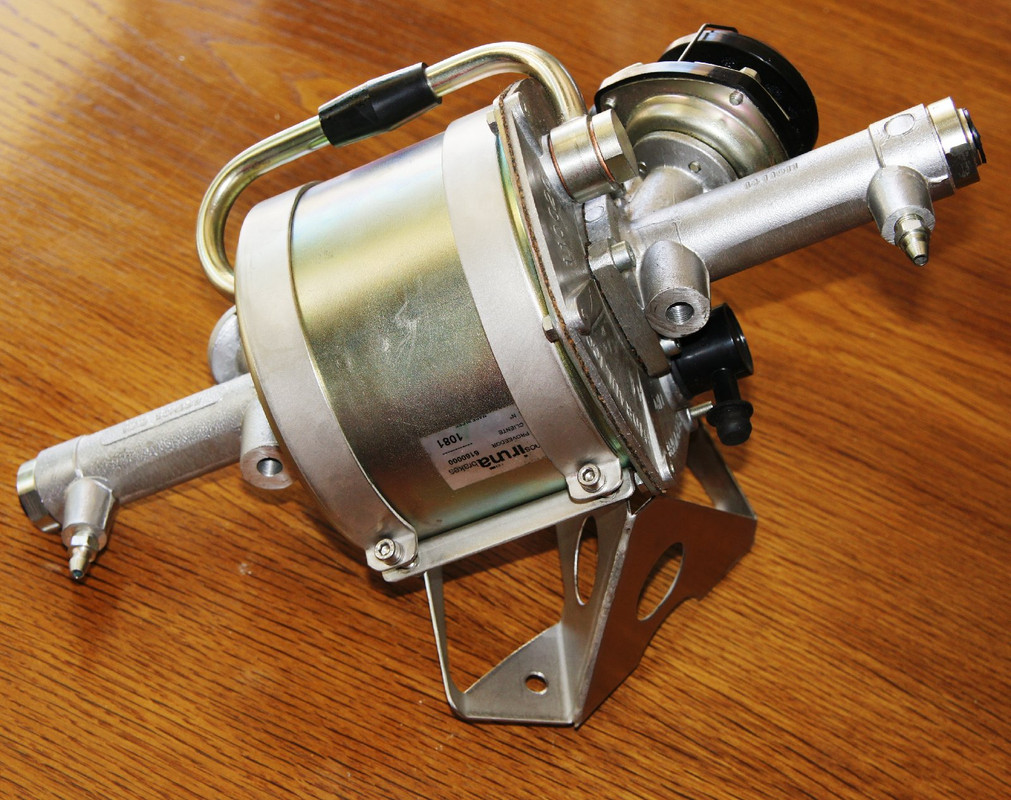 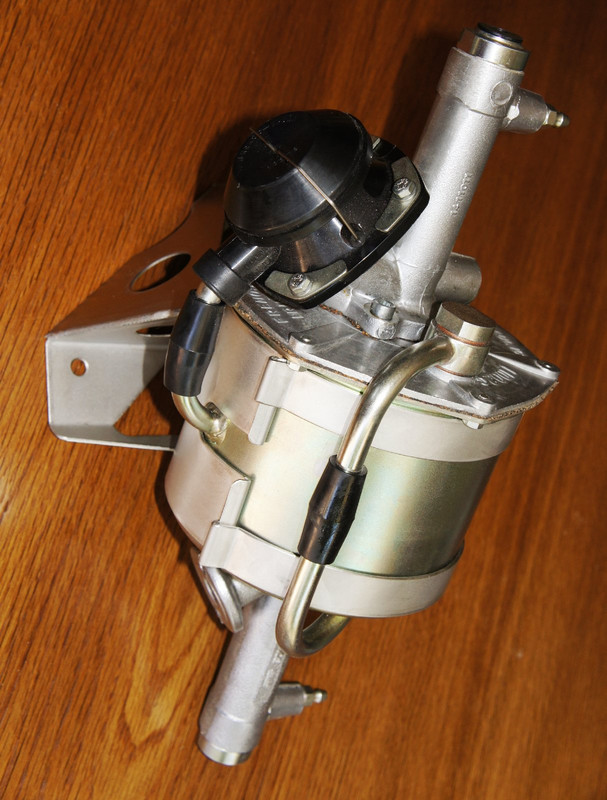 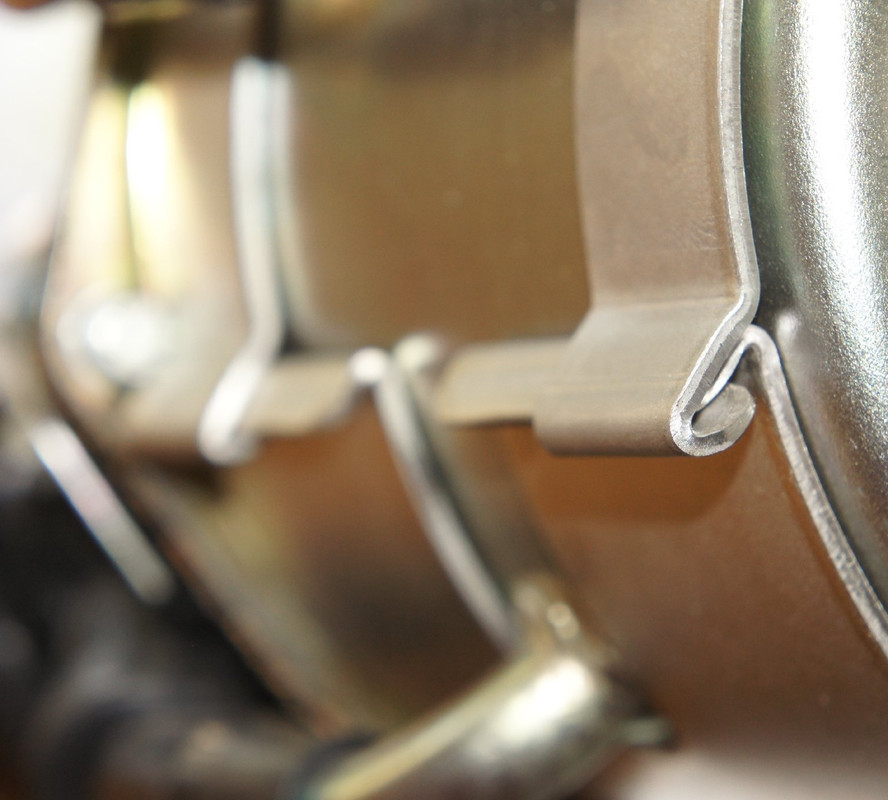 Piping up is straightforward, although I couldn't stop myself making new Cunifer everywhere as I went along ; all the Draper flaring tools I've tried are useless, even before the spigot one the 3/16 die breaks, and it was a breath of fresh air to discover this 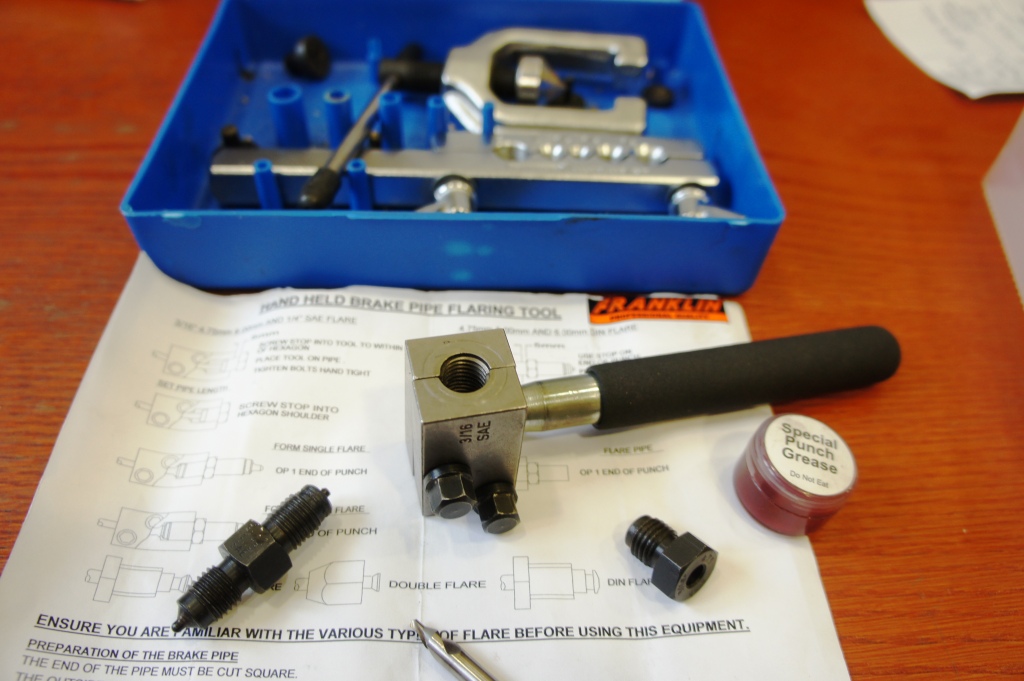 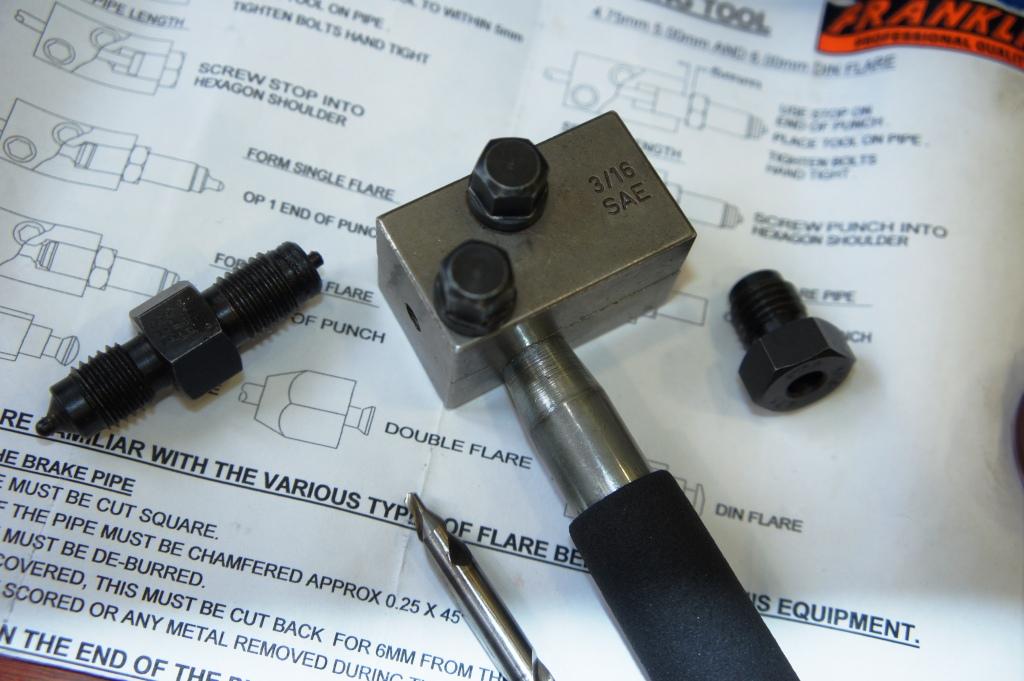 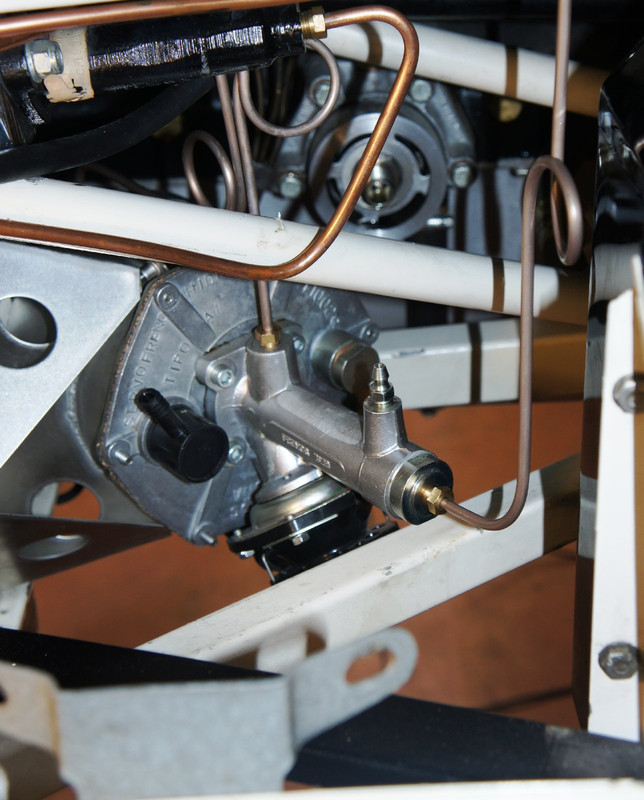 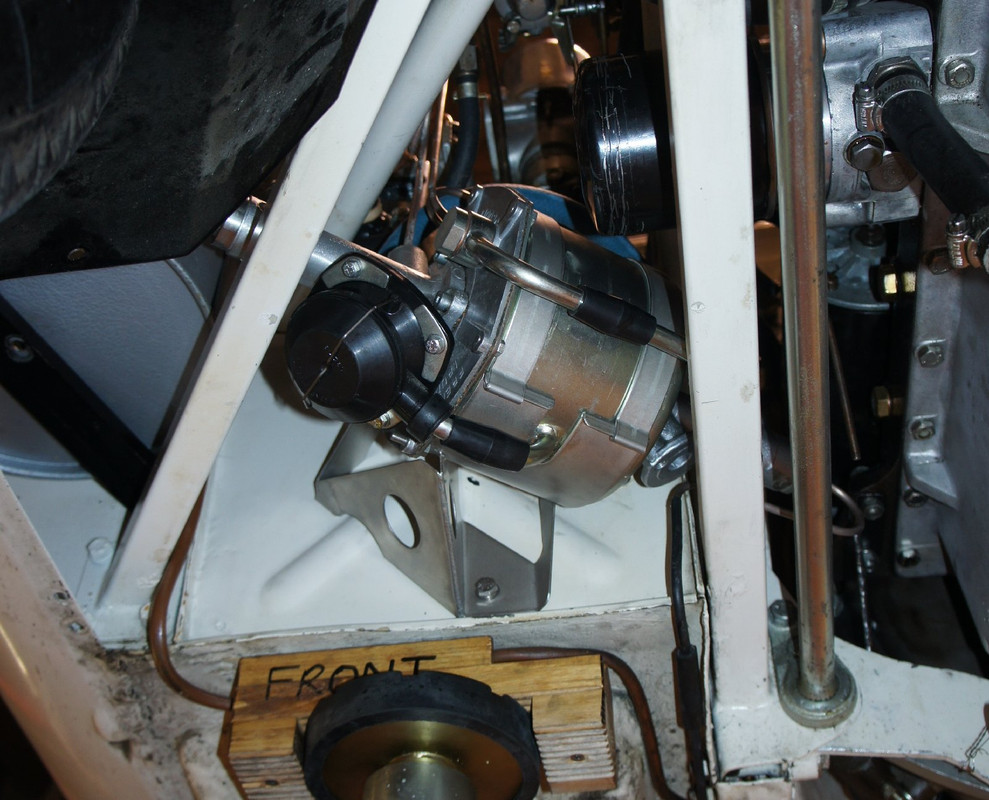 Straightforward, too, the bleeding - the servo cylinders are bled first, in the normal way, followed by the calipers, and using a Sealey pressurized pot (2.5L with pressure guage) for the first time (fits perfectly onto the Jaguar reservoirs) I was amazed just how quick and economical with fluid the whole operation was. 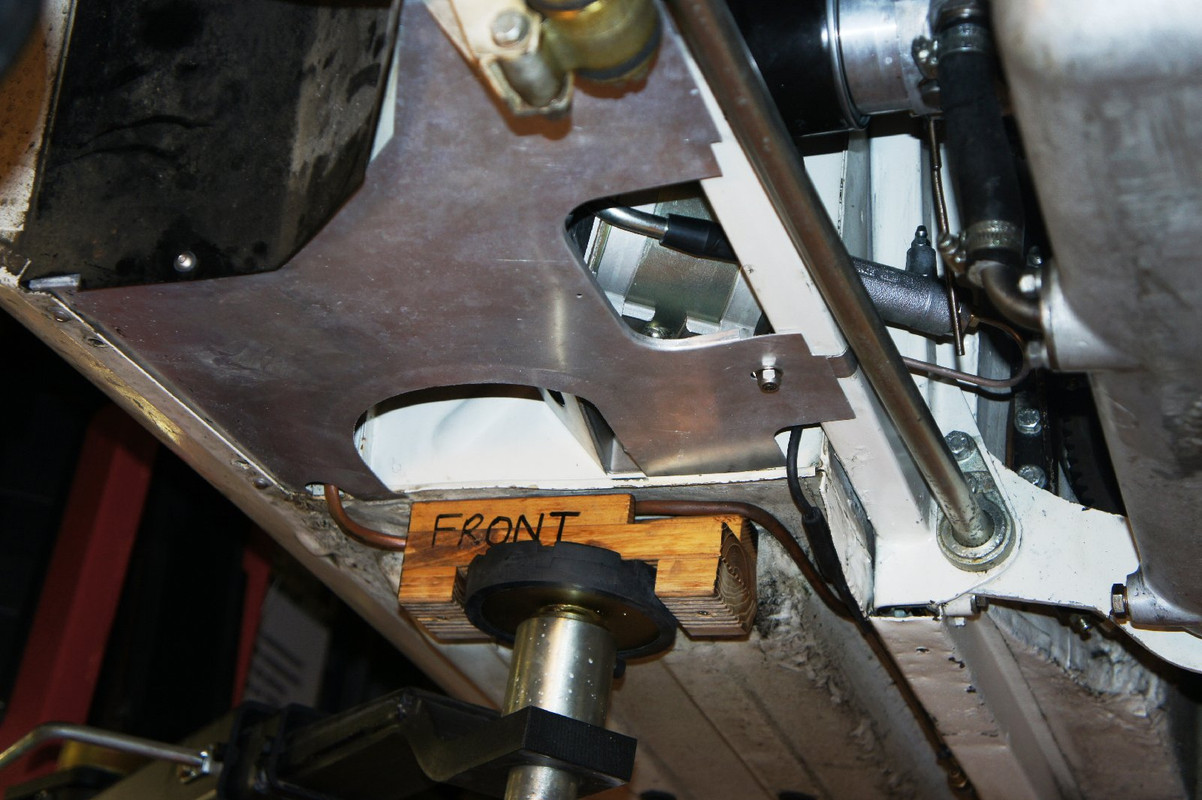 The brakes are transformed ; they still require some effort, even with Coopercraft calipers, which I don't mind, but there is no noticeable change in braking behaviour according to over-run suck, and above all I no longer need to double de-clutch AND lift the brake pedal back up going into a corner, and the mod is more or less invisible unless you're the sort that hangs around web-sites like this one. 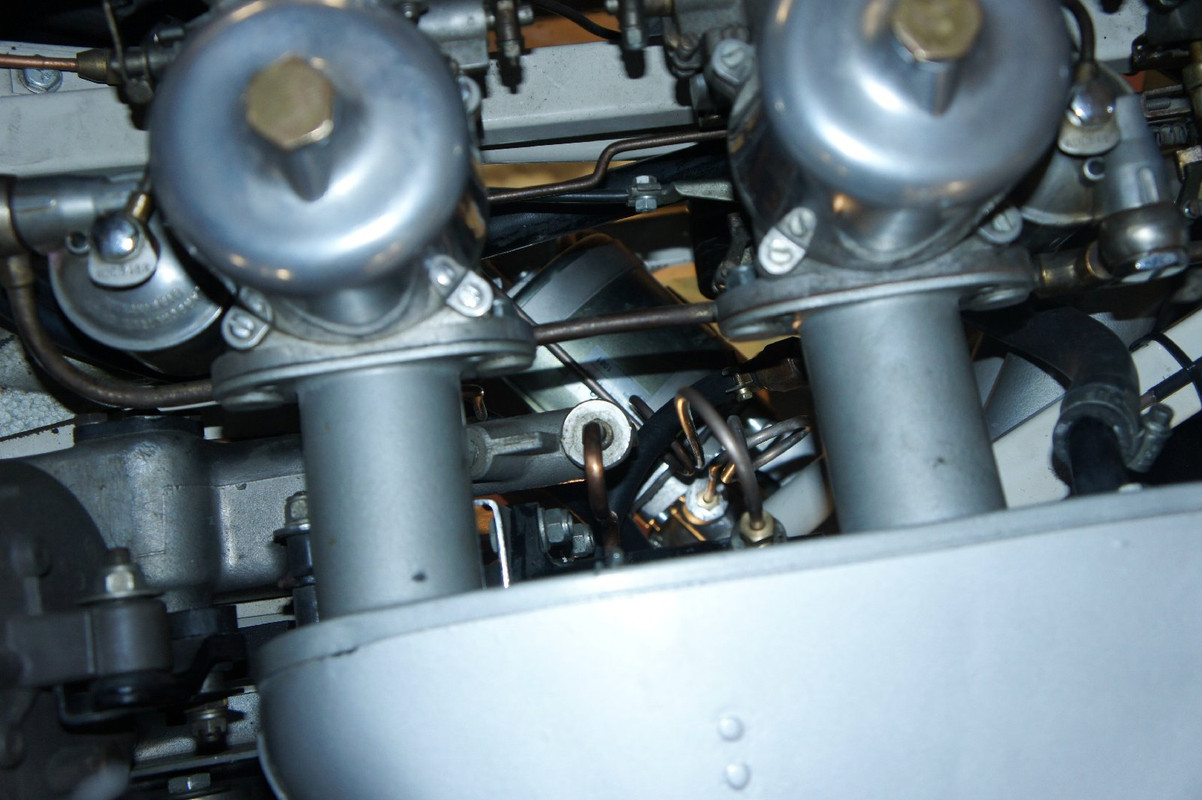 Looks really elegant, sorry if I am being a bit slow here, but am I correct to assume the piping is just a direct feed off the back end of the existing master cylinders, down to the servo and then off to the callipers..?...do you run existing Dunlop cylinders of did you change those also....and lastly..would Yvan be prepared to make additional mounts..?

Just occurred to me that I may not have replied to this ?

Yvan did this for me as a favour (an expensive favour !) and we didn't keep all the jigs and stuff afterwards, MAINLY because if I were to do it again I would go for the crutch/cradle/spacer plus U-bolts approach, in rather the same way as I held it in place on the frame-tubes during manufacture.

You could do a botch in an hour, or spend a day making something really nice, but the way I did it was a bit over the top and took far longer than a day to make ; I probably spent a day just making the mock-up, which Yvan then had to transform into stainless ............

Good luck and feel free to ask any questions.

#5 Re: Replacement Servo for Kelsey-Hayes on 3.8

Have just updated the pictures, and can report that over seven years later, and maybe 15/20k km, I am still really happy with the result.

Feel we often propose mods on the Forum but then never offer any follow-up ............ example, my lengthy attempts at modifying the centre console for bigger speakers etc better radio etc was a complete and utter waste of time

as I almost NEVER listen to the radio as the sound is crappy AND the wind-noise over-rides all else AND the engine is music in itself.

Currently have the servo off the car in a million bits and am about to overhaul it and change the seals whilst it's on the bench. 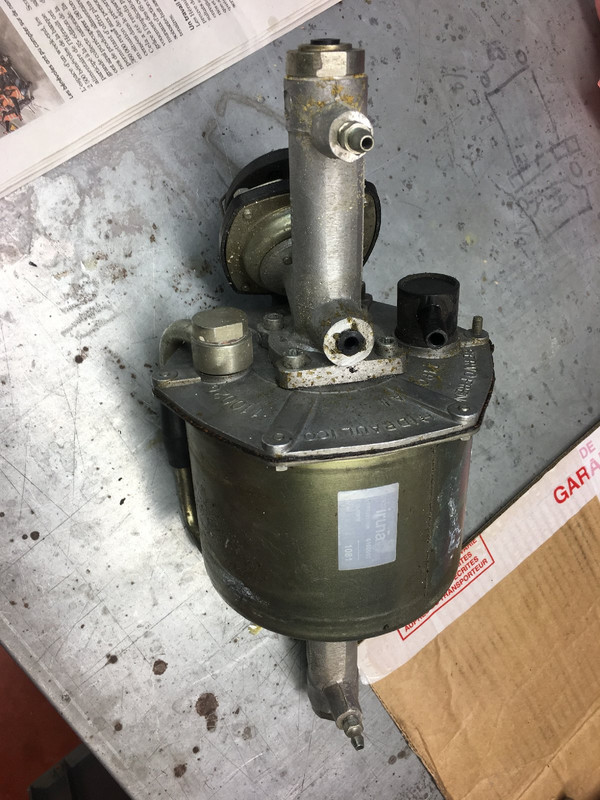 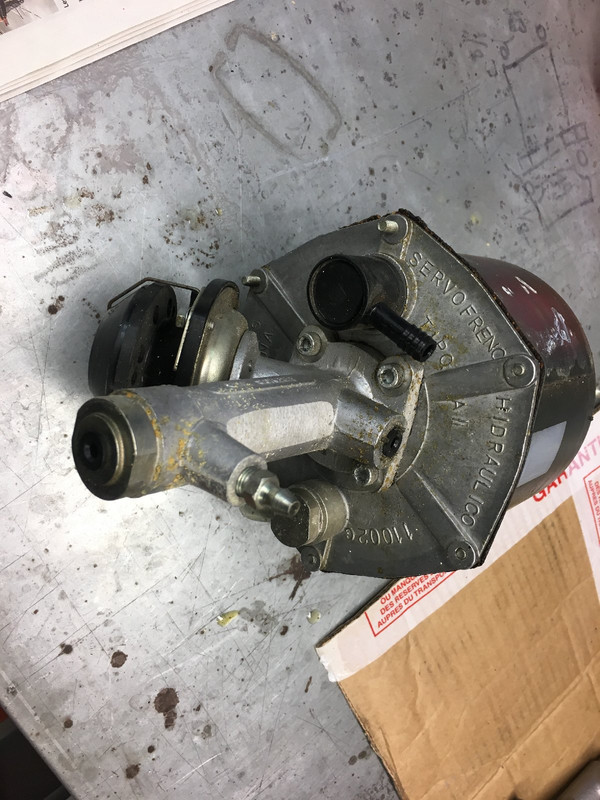 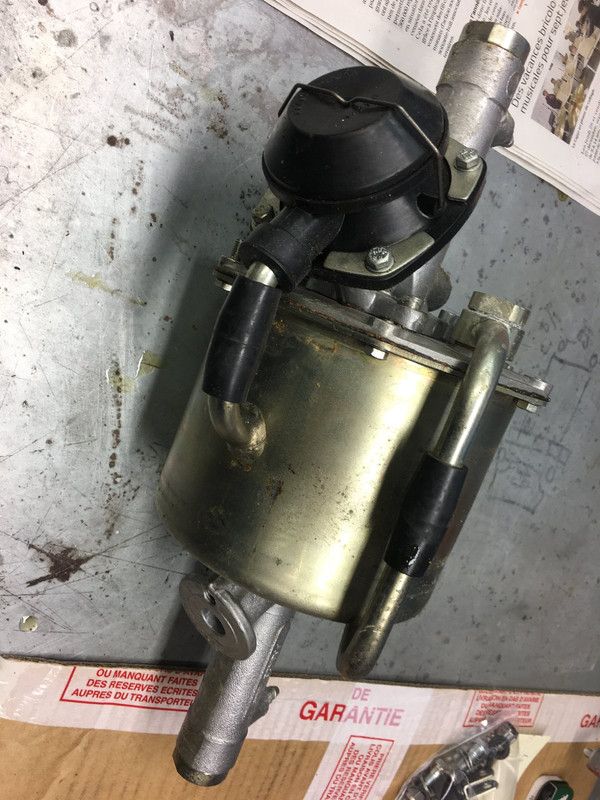 #6 Re: Replacement Servo for Kelsey-Hayes on 3.8

I have this servo, bought as a kit from Rob Beere. His kit includes 2 brackets for mounting to the engine frame. I am building a LowDrag replica and have not installed the servo, nor does the braking system have the original KH servo, running it unaided as per original.