I've finally got around to re-fitting my re-chromed bumpers so set about fitting the rubber seals.

I removed the bumpers myself before sending them off for chroming so I know they definitely had the rubbers fitted. In fact, this is the second time I have had them re-chromed and the bumpers and seals were previously fitted by the shop that did the bodywork and paint for me.

The seals are still in perfect condition so I decided to re-use them. I got the seal on the right hand side bumper without problem, using Loctite 4105 to fix it in place but when I came to do the left hand side I noticed that the bumper seemed to feel heavier than the other one. I continued trying to fit the seal but it refused to go over the edge of the bumper. On inspection I realised that the left bumper is made from a thicker gauge steel than the right hand side. I measured the thicknesses in an area where there is unlikely to be much stretch in the metal (and allowing for the paint on the inside of the bumpers) the left hand bumper appears to have been produced using 1/8" steel where the right hand one appears to be from 3/32" steel. This is enough to prevent the rubber seal from fitting on the left hand bumper edge. See photograph below. 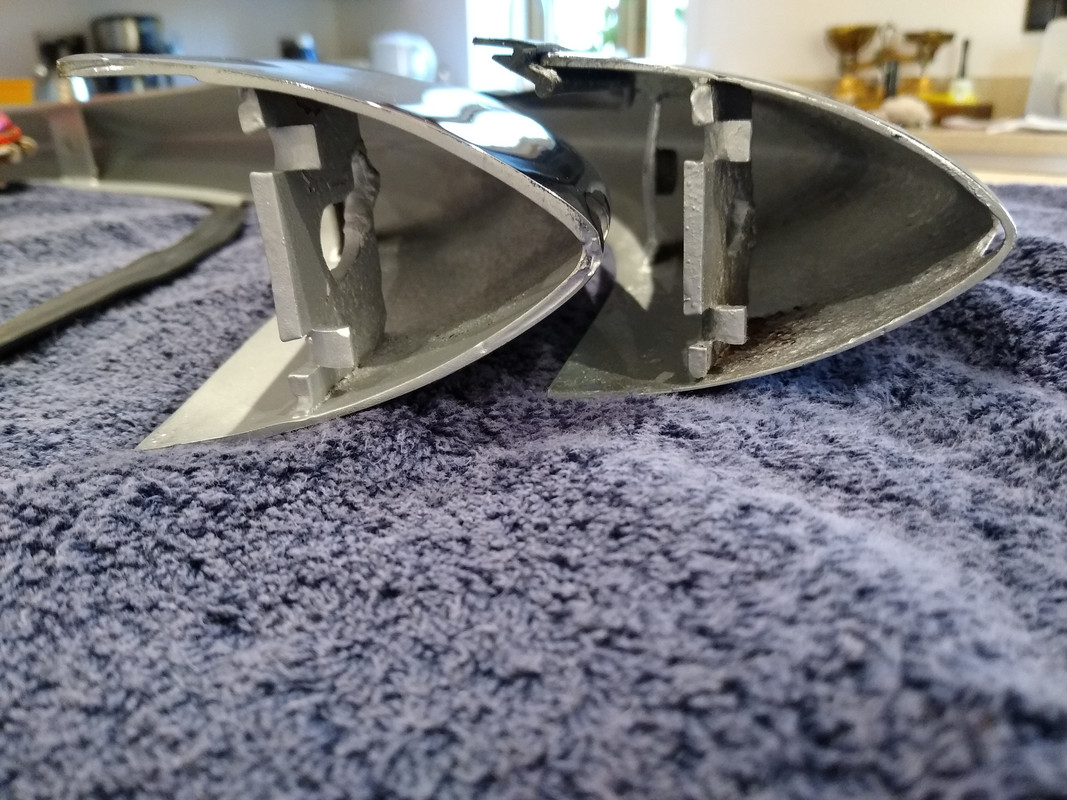 Is this a common occurrence? Clearly one of the bumpers may have been replaced at some point in time but this leaves me with the problem of getting the rubber trim to fit. I can easily order up more seals but will the replacement fit the thicker bumper edge? Does anyone here know for sure? I don't suppose I'm the first to encounter this problem. Any words of wisdom would be appreciated.

I'm not sure how the seal had been attached by the bodyshop previously, whether it had just been butted against the bumper edge rather than over it as it should be. I don't feel comfortable doing that again.

I suppose its possible that one of the bumpers got swapped over at the re-chromer's but we still have the 2 different gauge materials to contend with.

Looking at the photos, both bumpers are designed for a 3.8 since they do not have the recesses that were introduced to allow access to the fitting bolts from outside the car. I would therefore agree that one is original and one is a reproduction given the thinner gauge of steel.

In terms of the fitting of the rubber on the original, the combination of modern day triple plating and painting of the interior likely means these have ended up thicker than they were when fitted at the factory. I would obviously not advise any filing but you may need to fit the seal when the bumper is 80-90% screwed onto the car and keep adjusting it as the bumper is tightened. Heating the seal with a hair dryer as you feed it in and subsequently adjust it will definitely assist. Others may have different tried and tested methods so worth getting a mixture of views here.
Phil
1964 S1 3.8 OTS
Show post links
Top

It looks like it's a result of a re-chroming process.

The layer of copper applied on badly corroded bumpers gets thick. The plater sand it down on the outside, but they are unable (or do not bother) to sand it in the inside. This is the way the bumper grows in thickness and in weight... Especially on the edges. :-)

PS. the lip seems to be upside down?
Tadek

PS. the lip seems to be upside down?

I was thinking the same thing. Apparently the very early 3.8 cars had an even smaller seal, I'm not sure if that applies to Stu's car?
Simon
1969 S2 OTS
Show post links
Top

Not only is the beading inverted, but its the wrong beading. The profile that's shown in the picture is for use between the B/Bar and the body of S1, S1.5 and S3 Cars; S2 cars used a much wider seal in that area.

The correct beading will probably work on both over-riders, but if there is still a problem with the thick material over-rider, the thickness of the material in the area where the beading is to fit can be reduced using a die grinder on the inside of the over-rider and painting the bare metal with a rust inhibiting paint before installing the beading.

I think you're barking up the wrong tree with the theory that excessive copper plating got the thickness of the over-rider material to what you see in the picture. If that were the case, all the sharp corner detail of the mounting bracket would be lost. And I can't see the plating company using masking material on a part that won't be seen.

My car is a Series 1 (December '62, FHC) so it should have the thin beading on the bumpers, shouldn't it?

If the beading is inverted then that is how it was fitted by my bodyshop in the first place. I thought they knew E-Types judging by the pedigree of the people that were there but I guess you never know for sure.

Like you, I'm sure that the difference in the thicknesses of the bumpers is simply down to the manufacturers using different raw materials. I'm reluctant to take a die grinder to the newly chromed bumpers but it may be necessary. That will be a tense afternoon's work.

Hello Stuart,
Of course you're right; I don't know why I thought the pictures were of over-riders. In that case, the seal shown in the picture is inverted.

The same advice applies though if you can't get the seal to fit correctly with the correct lip side of the seal fitted to the B/Bar blade; carefully reduce the thickness of the material by grinding the inside of the B/Bar blade where the seal will fits.

When you grind, do not overheat the bumper.

And let us know what it was you grinded off.

I can bet Bill it was copper

I'm preparing my order for new seals - just gathering together a list of other items I need too.

The last thing I want to do is to 'blue' the chrome through grinding heat, or even scratch it. Slowly does it.

Once I get the new seals I'll let you know the outcome of the filing/grinding but, at the moment, I'm with Bill.

I can bet Bill it was copper

Hello Tadek,
For sure there will be copper, but highly unlikely to the extent that its increased the thickness variation between the two example B/Bar blades shown in the picture. As I stated in my earlier Post, that amount of copper would be obvious on the mounting bracket.

With the restorations carried out in my shop, repairs to the B/Bars are completed and finished with P180 grade paper using long backing blocks. I still have the B/Bars copper plated and returned to me in copper, where we block that back by hand to ensure really true surfaces without any waves or ripples sometimes introduced by linishing. Accordingly, even with only a moderate plating of copper, its obvious in areas where there is sharp detail such as the detail of the mounting bracket.

I fitted my rear bumpers at the weekend. As Bill suggested, I ground the left hand bumper upper edge to reduce the thickness to allow the seals to fit snugly.

I had to remove a good half millimetre to do this and was surprised when, as predicted by Tadek, the only material removed was copper, I'm pretty sure that I didn't hit steel at all.

You live and learn.