Finding another useful post regarding a front end wood spreader to fit under the picture frame to jack the car up safely and without damage, I have made up one from a nice pice of hardwood and it works a treat.
I want to make an equivalent spreader for the rear end on my S2 FHC to lift under the diff and protect the exhaust system. Has anyone made a suitable spreader and if so can you post a photograph and dimensions.
Thanks in advance. Paul.
Paul.
1971 S2 FHC (Opalescent Blue)
2007 Land Rover Defender
A number of Nortons.
1939 Triumph T100
Show post links
Top

Paul, dimensions will depend on which piece of spare timber you can find. You can easily knock something up out of bits you’ve got in your garage or shed
Nothing specific but, say, a piece of 2 inch square long enough to spread fore and aft across the IRS frame with a notch if needed to clear the lugs attaching the exhaust pipes. Can’t recall if mine is 2x2, but check what you’ve got thick enough to give clearance of the exhaust pipes and down to your jack.
That’s all.

I’ve just done exactly as Geoff suggests. Spent a few weeks removing and replacing my IRS. As you know this is blinking heavy and I needed to move this around the garage. After dropping down & then lifting to replace.

Used a piece of 19mm ply shaped to fit the irs plate with some scrap timber glued and screwed to this and fitted with some cheap casters from screwfix. Made sure that the timbers were apart far enough to allow my trolley jack to slide between them.

I had the tailpipes removed which I understand you do not wish to do - this is a 10 minute job.
Absolutely cheap and cheerful. Did the job admirably .
If I’m not too embarrassed at my woodworking skills i will post a photo.
Series 1 FHC purchased 40 years ago. Courted my wife in it.
Series 1 2+2 when the kids were small now sold.
Series 1.5 OTS in opalescent maroon, Californian car. My retirement present.
Show post links
Top 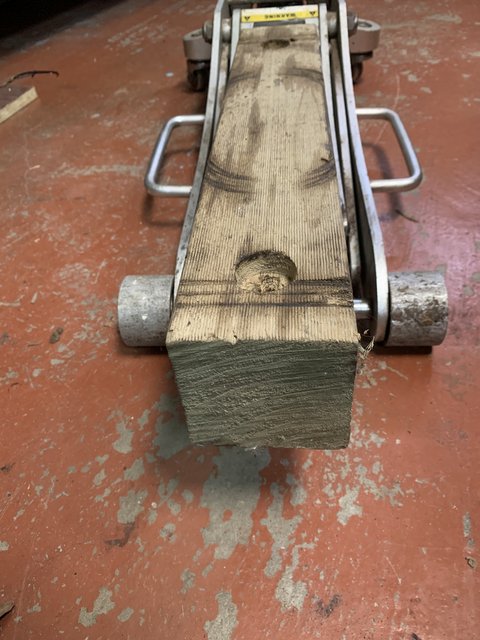 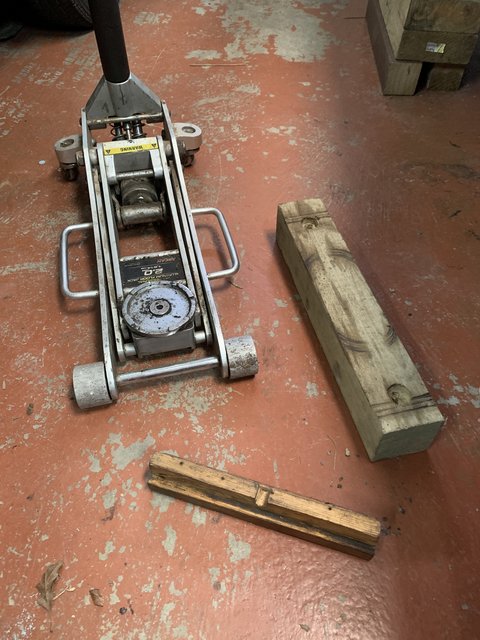 90mm x 90 mm, fits between the pipes and takes the weight square on. Two holes, but distance may vary depending on models - mines a Series 3 and the gap is 380 mm centre to centre. I just jacked the beam up a little bit and made impressions of the bolts on the base of the IRS, then drilled out with a flat blade hole borer.

The other piece is my front jack pad.

If the exhaust is off, then I replace the pad of the jack with this (shown balanced on the pad rather than firmly attached): 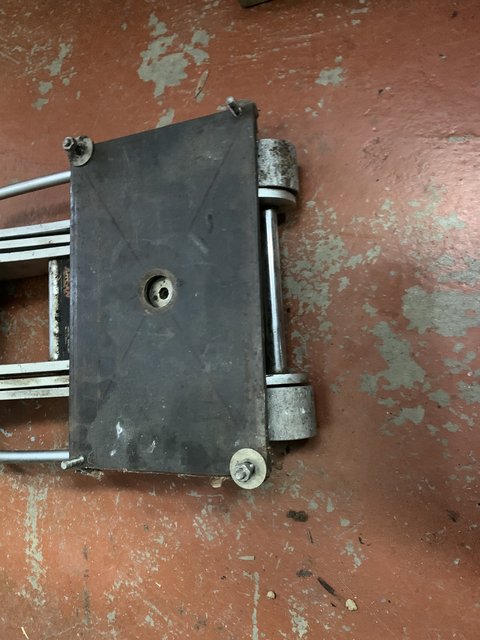 The bolts and flat washers fit close over the base of the IRS, then the pad is firmly bolted to the jack and the IRS is rock steady on the jack, can’t fall off, stays upright and can be moved around with ease and safety. Bolt centre distance is 305 mm ( longest side), the short side doesn’t matter so much.

All homemade. The beam is just an off cut of treated pine. Some say too soft, but it has served well for ten years or so.

Paul,
Here’s mine from a previous post :-
I have a simple jack plate which fits each side of the exhausts. The wooden 70 x 45 mm lifting supports just fits snugly each side of the pipes, with the wood picking up on the differential trunnion brackets. 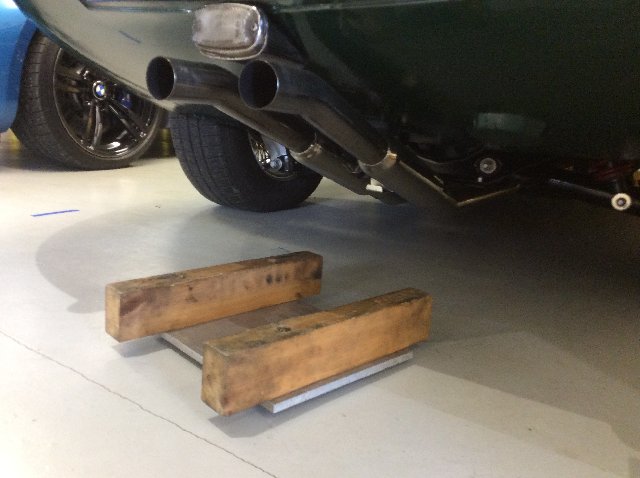 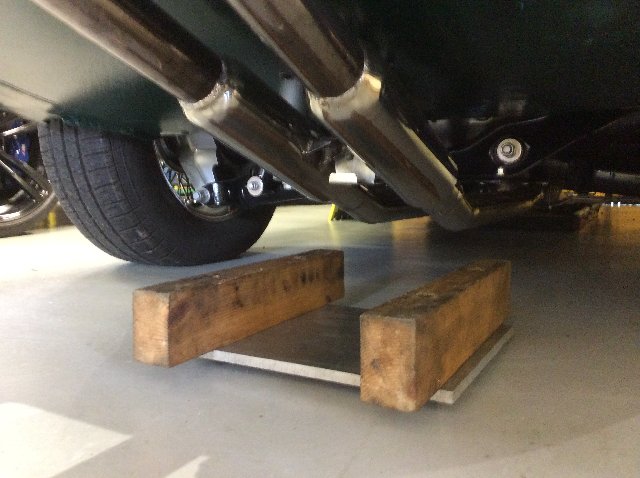 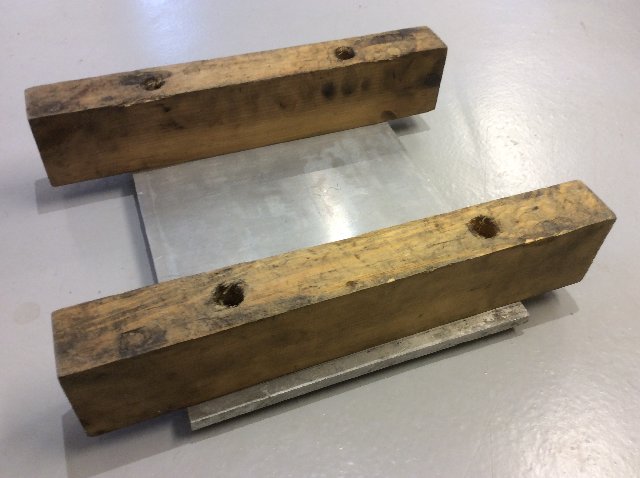 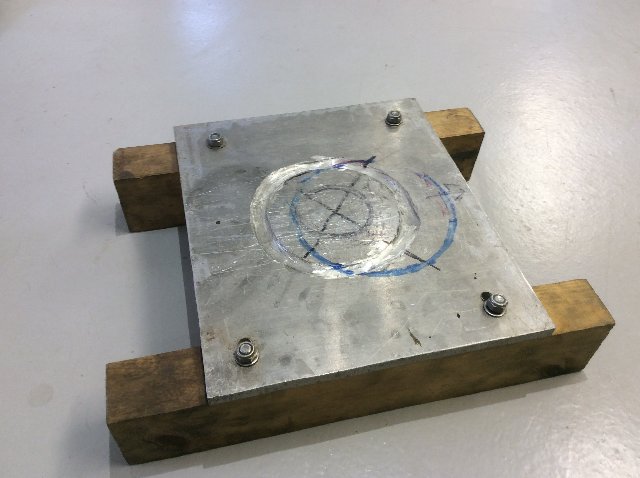 Full text and previous post and other comments and ideas on rear jacking here :-

Thank you all for your great responses. Dave, I had previously seen your post for the spreader and will look at that as a design guide as the S2 exhaust on my car is a slightly larger bore.
Stay safe, Paul.
Paul.
1971 S2 FHC (Opalescent Blue)
2007 Land Rover Defender
A number of Nortons.
1939 Triumph T100
Show post links
Top

As I was using the spreader today, I thought I’d show a photo in use. Really really simple, cheap and stable. 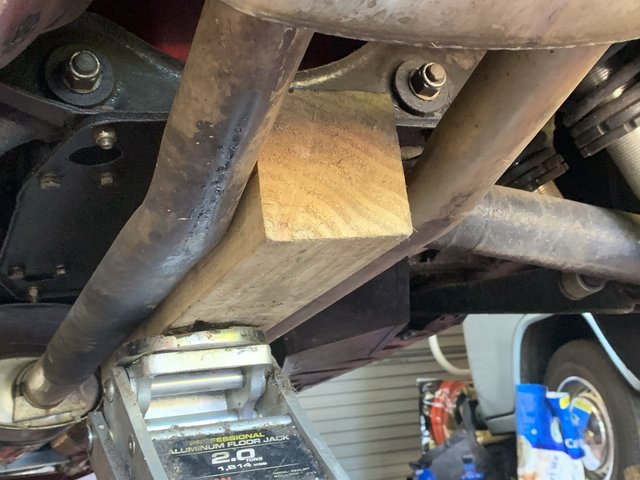 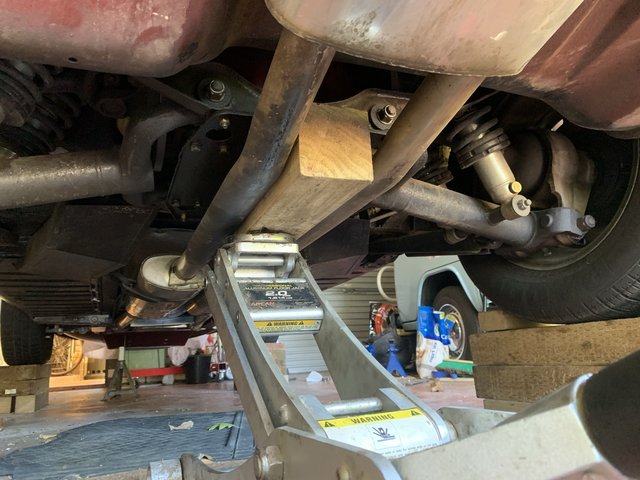