Just bought a OTS 1973 and going through various problems/issues.

Handbrake warning light wasn't coming on. Checked the bulb, which the previous owner had removed. Inserted a new bulb and it is now permanently on.

Check brake fluid cap switch. This seems to be fine, breaking ground when in the fluid. Lifted up out of the fluid, makes ground. So that seems to be ok.

Checked the handbrake micro switch which needed adjusting. This now works (checked with continuity test) with handbrake off breaking ground. I thought I had sorted the problem. But ignition on, handbrake down light is still on.

Disconnected wires to both the handbrake micro switch and the fluid cap. Light still on

Tested positively for continuity to ground (black/white cable) on both switch and cap. So still must be grounding somewhere.

Anything I have overlooked? or any ideas what to do next.
Dave

Its a US spec car? Then it has a brakes PDWA (pressure differential warning actuator). If there is differential pressure between the front and back brakes it makes the warning light come on. Doesn't turn off, you have to reset it. Bleeding yr brakes causes it to come on, also requires it to be reset. How to reset? In effect by re-bleeding yr brakes. If it is clagged up by neglect u won't be able to reset it, becomes a remove and overhaul job. Where is it? Underneath the windscreen water bottle, down low, LHS, in front of the brake servo (which for US spec car is on LHS. How to test it? just disconnect the wires, light comes on when PDWA switch makes 3rd connection to earth (after brake fluid switches and handbrake), disconnecting means it can never cause yr light to come on, doesn't effect the other switches ...
Regards,
ColinL
'72 OTS manual V12
Show post links
Top

Welcome - sounds silly but did you check the switches on both brake fluid reservoirs?
Bob
'71 S3
Show post links
Top

Thanks people for the quick replies.

It never entered my head that there were 2 reservoirs

Always the obvious, live and learn.

Just pressing the needle down on the other, it doesn't feel the same. So I am off the test that one.

If its not the fluid reservoir switch then the PDWA would be the next port of call. They were fitted to early UK cars but not the later ones. They can be tricky to sort out and in my experience the after market replacements are junk. I ended up taking it off my FHC as Jaguar clearly did not consider them essential.
Cheers,
Adrian Turner
S3 OTS & FHC
S1 FHC
XK140 FHC
Show post links
Top

Checked out the second reservoir (LHS) and that tested OK.

This had a third wire going down to PDWA. Not a great image but you can see the switch on top. 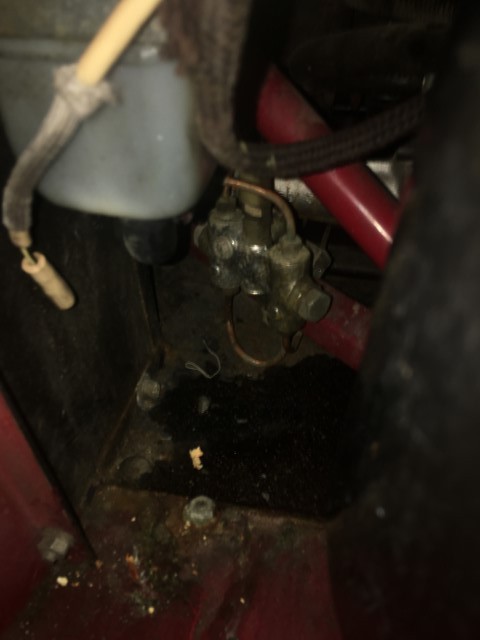 I am pretty sure this is a UK RHD chassis 1S1849. I haven't got a OTS parts catalogue to check if this has a PDWA, only a 2+2 catalogue. Have one on order now!

Disconnected the bullet connector going down to the PDWA and the warning light is no longer illuminated and working correctly with the handbrake.

However when screwing back the cap noticed that bits where breaking off the cap. Also noticed it's a bit wet on the mud shield. So the cap may have been leaking for a while. I have just made it worse tightening. The car is obviously not derivable until I get a replacement. 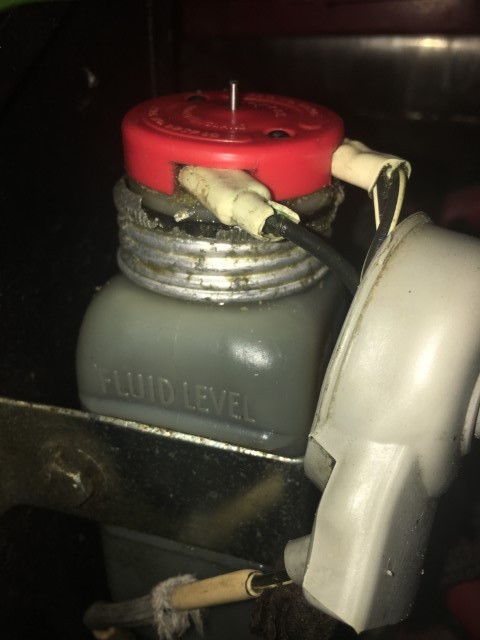 I am reserving judgement on whether the PDWA has a fault as it may be working. I am assuming that each reservoir is for front and back brakes and it is comparing the difference.

Lucky escape I think, thanks.
Dave

No it is consistent for a UK RHD, from the Jaguar Heritage site

I have a Jag Heritage certificate for the car as well.
Dave

Hi Dave,
It sounds as though you have identified the source of your initial problem. There is a procedure in the manual for resetting the PDWA that may allow you to fix that for nothing more than some time spent bleeding the brakes. On the other hand if the PO took the bulb out of the warning light it may be that the shuttle has been in the wrong position for a good while and could be tricky to reset. It can help to make up a simple tool to hold the shuttle in the central position while you re bleed the brakes. The seals for the shuttle are available so you could strip it and rebuild it if necessary.
Cheers,
Adrian Turner
S3 OTS & FHC
S1 FHC
XK140 FHC
Show post links
Top

Hi Adrian, where do you get the seals? I've had 2 goes at fixing mine. Problem is I can't find the correct square section seals. O rings,standard metric size, aren't quite right...
Also, on mine, the shuttle is in 2 parts. Do you know if this is common?
Regards,
ColinL
'72 OTS manual V12
Show post links
Top

The overflowing brake fluid and corrosion of the cap of the bottom reservoir suggest that the car has stood for a long time in the past. High level of moisture in the brake fluid causing the corrosion and transfer of fluid from the top reservoir to the bottom one due to leakage passed the seals on the piston in the servo where the front and rear systems are isolated. With the PDWA questionable as well sorry to say that it sounds like it's time for a full overhaul of the brake system.
Bob
'71 S3
Show post links
Top

Sound advice from people - thanks.

Bob, I think you are correct. It has been standing around for quite a while very little mileage from year to year. It has a very extensive collection of invoices throughout the last few decades. Despite being looked after by a classic car specialist for a last 9 years, I can not see any mention of brake fluid change. Unless of course the previous owner did it himself and didn't put in the bill. But I have some doubts that is the case, judging by the contents of the invoices and the colour of the brake fluid. The lower reservoir is full as you can see in the picture and upper is at the correct level. So the upper reservoir may have just been topped up in the past.

You suspect that there is a failure within the brake servo as well. Just so I get this right in my head, the reasoning behind your thoughts are questioning where has the fluid come from in the bottom reservoir? It has been forced out by small holes in the cap. Thinking back I did notice some wet grime around the reservoir when I first looked at it. If the brake servo was working ok and separating front and back. The level should be lowering not rising as it losing fluid out of the holes and you would need to top the bottom. Is this correct?

I have probably driven about a 100 miles or so since purchasing the car and didn't notice any issues with the brakes. The top reservoir is still at the correct level, so this may be an old problem. I do not think it was losing a lot of fluid.

Considering the cost of Servo rebuild kit and the fact that I need change the brake fluid anyway. It does make sense to rebuild now.

As regard to PDWA, I would guess it will be gummed up, unless I am lucky. I am still trying to find a source of the o-rings, only looks like a full unit is available.
Dave

Yr photos look like mine when i bought it, had also sat unused for many yrs, Aluminium cap switches corroded.
Leaks due to almost undetectable cracks in the plastic bottles.
I bought cylinder refurb kits but didn't use them, found there was corrosion in both master and slave cylinders cheaper to buy all new incl. Servo, instead of repair (resleeve) cylinders. Such corrosion almost certain if yr car has been sitting for yrs like mine had.
viewtopic.php?f=6&t=12421

Hi Dave,
This is what I think has been happening and over a long period, others may disagree.

The V12, unlike the 6 cylinder cars, has the two brake reservoirs at significantly different heights (probably about a foot without measuring it), the one feeding the master cylinder and front brakes on the bulkhead, the other much lower feeding the servo and rear brakes and buried almost out of sight, as you found, on the splashshield behind the LH front wheel.

Fluid has been transferring from the upper reservoir to the lower and as you surmise, in the past the upper has simply been topped up while fluid was lost from the lower, initially that would have been via the fluid level "tell tale" rod in the cap and around the cap thread which over a long period of contact with moisture in the air, due to being overfull, has lead to the cap corroding through.

Fluid transfer can occur in two ways, statically due to the pressure difference between the upper and lower reservoirs and dynamically when the brakes are in use but both due to a worn seal, bore corrosion or both but only in the servo.

If you look at the diagram below you will see that the two reservoirs are separated by the seal on the servo slave piston (marked O). If moisture has been present in the brake fluid over a long period, corrosion of the bore here will have occurred, potentially providing a path for fluid to transfer between the systems. This may only be in a position with the system at rest when the difference in reservoir height will drive fluid transfer or it may be during use when the piston will have moved to a different position in the bore and fluid from the master cylinder could transfer. It could be a combination of both.
Hope this helps
Bob 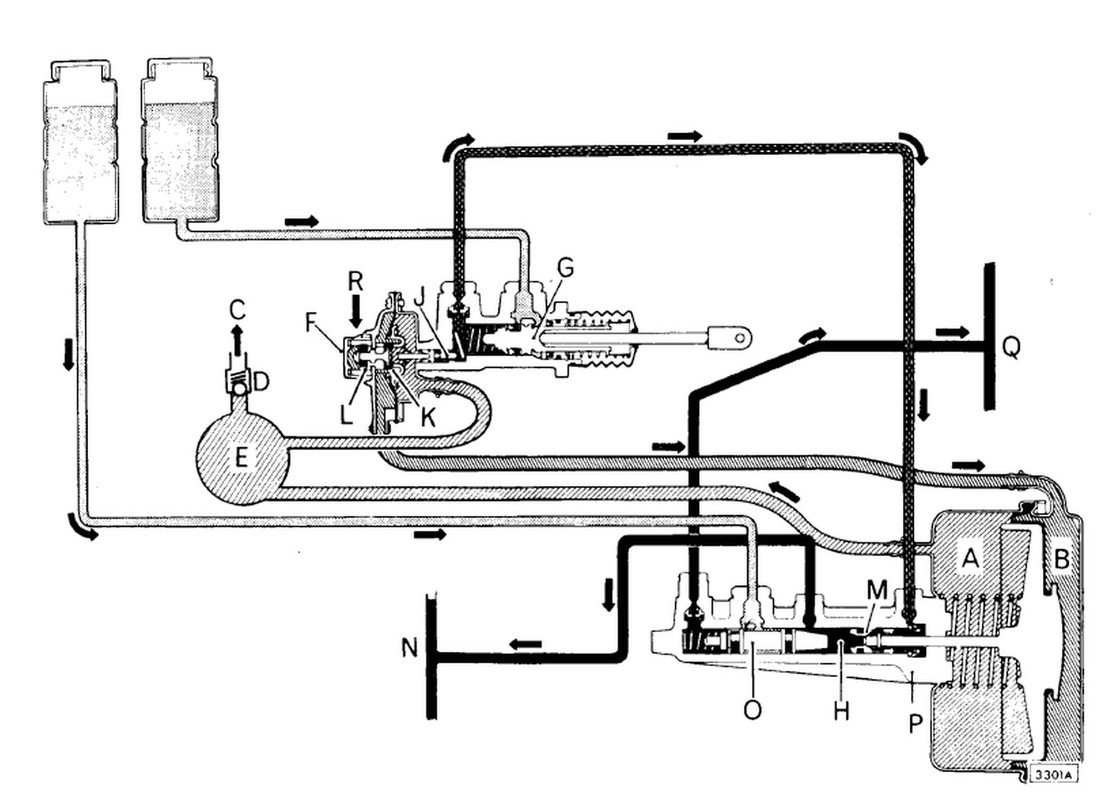 Thanks for comments and detailed responses. It looks like a brake system overhaul/inspection is definitely needed.

Bob, I think you are right that it's leaking down and being topped up. There is distinct difference of colour between the top and lower reservoir (not black, still brown). But I think (from a novice point of view) there probably was a small hole in the lower initially as the air needed to escape for the reservoir to fill up. A combination of two different issues which lead to further deterioration of the cap.

I thought I would dig out the caps from my 2+2, unfortunately with close inspection both had small holes in the top, nothing like the corrosion on this one. They would probably be sealed with the rubber washer, but I wouldn't take the chance. On that, one was red and the other white cap.

This had what I believe original (red caps), I have now replaced both with OEM (white caps). Not sure why they the changed the colour of the cap, same make etc.
Dave