by lowact
Getting ready to support my 350kg engine on a shiny new 900 kg engine stand. 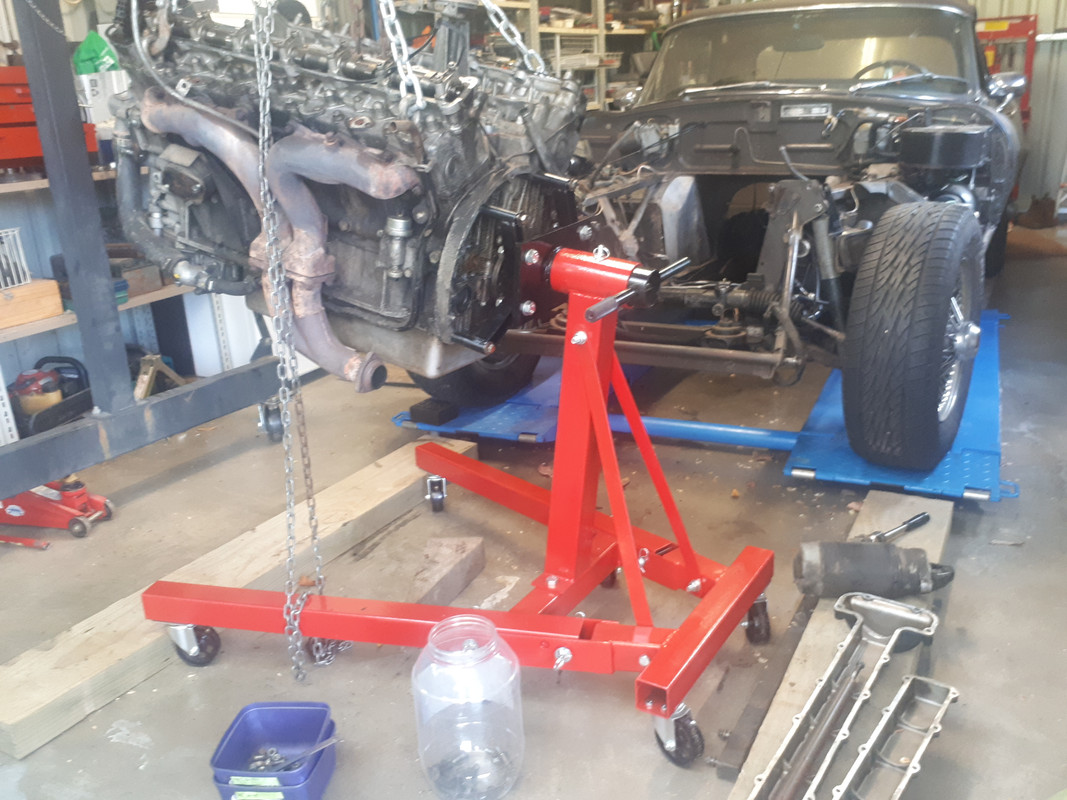 Lots of people must have done this before, still I’m not comfortable. Do we know of any problems, issues? Do we know which bell-housing bolt-holes are best to use? Two on top, below each head, and the two lowest, including the bottom starter motor bolt hole???
Thanks.

It looks like you're good to go so you have probably bitten the bullet by now!

I've had a V12 and several other heavy engines on a similar stand and the only problem I found was rotating the engine so, as I work alone, I tend to hook up one side of the engine on the lift chain to take the weight to give better control during rotation.

Looking at your picture,I think I used the same bolt holes as you have.

by abowie
Hi Colin. Your stand looks very substantial. I'm sure you will have no trouble.

We work predominately on 6 cylinder cars, and I believe these engines are heavier than the V12.

We use 500kg rated stands which don't have the cross bracing and only 3 wheels. The engine is held to the stand using four 4" 3/8" UNF grade 8 bolts. It stays there the whole time while we are building it; that is usually a period of several weeks.

Our stands have all seen dozens of engines without any problems.

by PeterCrespin
Same l stand as mine & Mark Gordon. I stood on mine (extra 100.kg on the nose) and it never even creaked.

by 42south
Hi Colin
I used a less substantial stand than yours. The problem that surfaced was when turning the engine over a crack was noticed in the area at the rear where the bolts support the engine. So we supported the engine with a piece of timber under the sump. 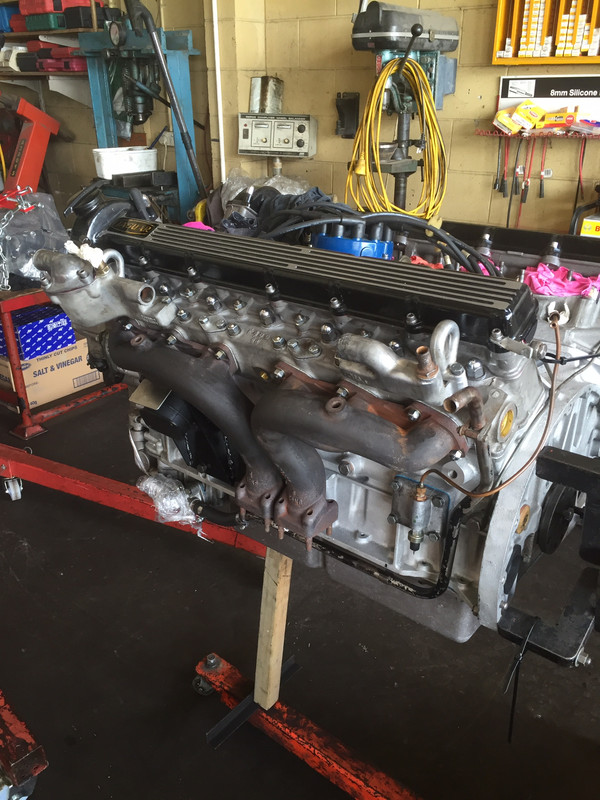 by lowact
Thx peoples, in the end I used the two uppermost and two lowermost bell-housing bolt holes, I.e.: 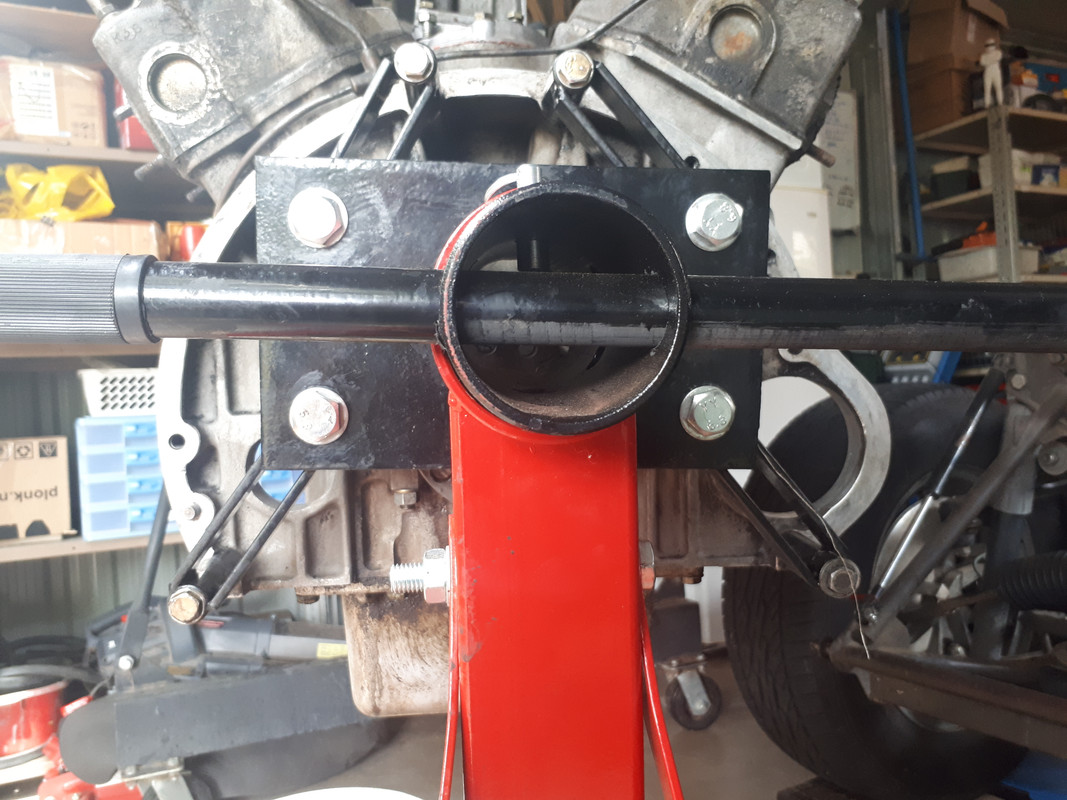 My main concerns are about the stresses on the engine block bolt holes. The two lower holes will be in compression while the two upper holes (each 15 mm of 3/8" NC aluminum thread) will be in tension equal to more than twice the weight of the engine and many times more than what they could see in service or have been designed for?

The lower holes, one is in a skinny flange only designed to support the starter-motor? 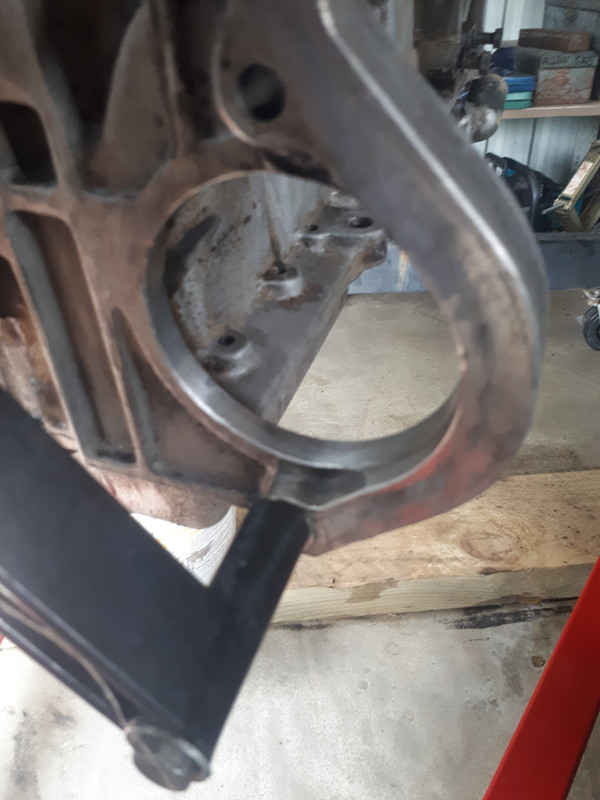 When I spin the engine the bottom holes will be the top holes and compressive load will swap to tension, of even higher magnitude (due to the relative dimensions). To be safe I will not be spinning with the heads on.

I've interpreted from your advices that, for various reasons, alum V12's have had "supplementary support" of one form or another. So, I'm keeping the hoist in play, via an old fan-belt off the crank pulley, to relieve about half of the deflection that occurs when the stand is loaded: 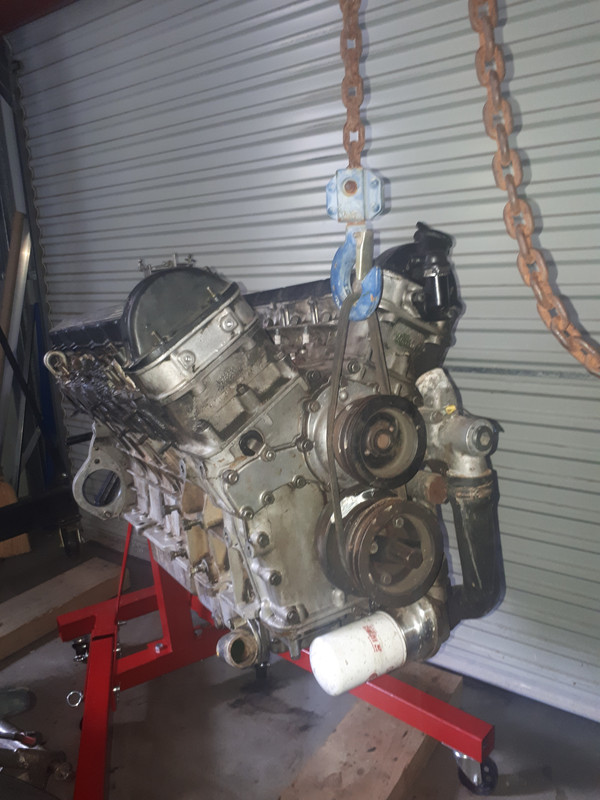 by AussieEtype
Colin I would be wary about bolting it to that hole where the starter bolts up. When I last removed my engine a crack was progressing up the side of the block where the metal is that holds the starter - I guess was metal fatigue from the weight of the starter motor vibrating. With the engine out was an easy fix with a tig and expert welder but does highlight that the protrusion that the starter bolts too may not be as strong as it should be and may not be strong enough to hold its load when the engine is on the engine stand - noting when in the car that protrusion only has to hold the starter. I would bolt the stand to the holes that would normally holds the main load of the bell housing.

Like you I was concerned about the strength of typical engine stands for the V12 - not so much its weight but how long the engine is and the resulting twisting moment. Given the above comments my concerns were obviously not warranted but I was concerned at the time so I built my own and had moveable supports from the stand legs to the engine mounts - worked fine.

Also like others I did have issues turning the engine as it was hard to determine the CofG - I had the engine mounted too high and was ok when upright but turn a little and the weight wanted to take over and at one stage the engine completely spun around and as the weight was now at the bottom was almost impossible to get back up with a pulley system to pull up right. The CofG is well above the line of the crankshaft.

by lowact
Ok, thx, based on this I've just gone out and pulled a lot more of the load back onto the hoist (crank pulley) pending next step...
I went for the highest and lowest bolts, incl. the starter motor bolt, so that the effective moment arm would be longest, so the tensile load on bolt holes would be the least. If I can't use the starter motor bolt hole the next bolt on that side is well above the crank, possibly even above the CofG, this would make the load on the top bolt holes (threads) enormous. I'm concluding that with this type of engine stand, for alum v12, supplementary support must be extremely advisable.
All times are UTC
Page 1 of 1
Powered by phpBB® Forum Software © phpBB Limited
https://www.phpbb.com/