Has Anyone Fitted the Tremac 5 Speed ?

#1 Has Anyone Fitted the Tremac 5 Speed ?

The three paint dots on my speedo are 60kph, 100kph and 110kph as measured by GPS and my tacho is accurate. 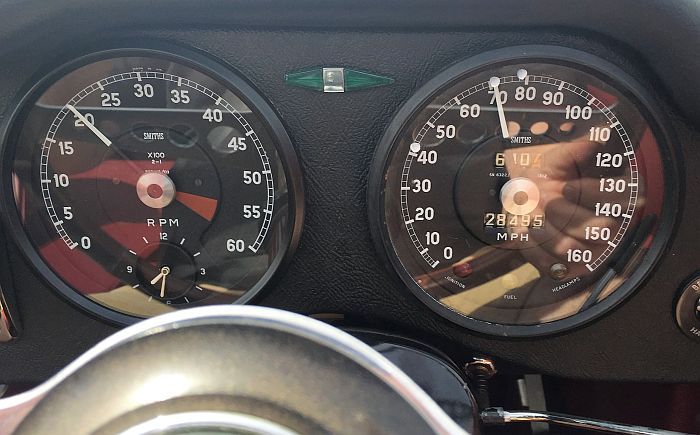 So your Speedo is 8mph High at 62 Mph and 11mph High at 68Mph ? Thanks Russ
Show post links
Top

BTW-make sure to observe the manufacturers (Tremec's) recommendation on lubricant and ignore all the Internet blather on the subject. Using regular gear oil in these gearboxes makes the synchros very unhappy.
Steve
'65 S1 4.2 FHC
Show post links
Top

My Thoughts Exactly BitsoBrits thanks ,
My Understanding IS that the Tremac is fitted into the New Mustang .
Show post links
Top

Couldn't tell you. All my cars have speedos that read inaccurately. I just calibrate them with GPS and dots of white paint.

Sort of. Like the Ford GT is just an updated version of the Model T.

"Updated" is the operative word here. The latest spec version of the Tremec is substantially different in design detail and torque capacity than the old BW T5, including different synchro design.

Much is written on these gearboxes, and it's worth some study if you are going to install a used gearbox as there were a lot of specification variations and changes over the last 35 years. Or just buy a new one from a reputable vendor and not worry about it.

The Tremec is rather noisy in 1,2 and 3rd, does not shift easily. I find that if I shift at very low rpm (not more 1500) shifts are easier, giving lots of time for the synchros to equalise between shifts. Fortunately the V12 is quite happy to shift at those low rpms with all the torque its got. There is hardly a hill that it won't climb in 5th!!

1500 rpm at 120kph is too much of a good thing. It’s an over-square 12, not a tractor, so why drive it like a diesel? Any hill it can climb at low revs in top would be climbed with far greater mechanical sympathy one or often two gears lower. Horses for courses. You don’t put an Arab stallion between the shafts of a brewery dray or milk float and you don’t enter a shire horse for the Derby.
1E75339 UberLynx D-Type; 1R27190 70 FHC; 1E78478; 2001 Vanden Plas
Show post links
Top

Speed limit. Cruising at the maximum allowed by law is required, and actually quite pleasant. Doing so with an engine so powerful and in a car so light that 1500rpm cruising is not just possible but positively enjoyable and is a privilege.

Engine longevity. All other things being equal......... lower engine wear.

I could go on, but this is the best bit. If a young turk drives up to your rear bumper in his turboed and phatted up Golf, and your inner hooligan gets the better of you, you can with a blip of the throttle as you drop two gears (or three), show him just how 385bhp in a 3000lb car performs, or at least Barry can.
Chris '67 S1 2+2
Show post links
Top

Thanks Chris. I enjoyed your evocative word portrait, with which I identify completely, on two wheels or four, where camera-infested public roads cruising is concerned. Note my reference to Philip’s unattained but aspired gearing as too much of a good thiing. Your post supports the ‘good’ part but doesn’t address the ‘too much’ aspect.

I am in favour of owners configuring their Es however they wish. So if Philip enjoys his current gearing for exactly 250 mph at the V12’s wonderfully understated 6,500 rpm red line, then as Lady Day sang “Ain’t nobody’s business if I [he] do.”

The XK’s entire architecture is designed around torque, and happily trades piston speed limits in exchange for gobs of buttery Grand Tour pulling power. On the race cars, the rev limit was only 250 rpm higher than the road models, showing how optimised the XK is for flexibility.

The V12 was born from a racing programme where horsepower is at least as important as torque. The 5.3 is nowhere near its physical limits at the red line, which the later handbooks officially advised owners to explore regularly, to avoid coking up from excessively docile use. Lots of V-12s die from sludge and being driven like pushrod iron V8s.

When they increased the capacity of the XK the stroke was never increased, showing the initial choice was for torque rather than revs. When they did reduce the stroke (for smaller capacity road tax or racing classes) things rarely went well. On the other hand, when they enlarged the V12, they increased the stroke, because the rev ceiling / piston speed was set very conservatively to begin with, showing the engine was built to rev more than pull tree stumps.

If Zuid Afrika suits improbably tall 250 mph gearing, so be it. If Philip dreams of even longer legs with 75 mph /1500 rpm cruising, (i.e. 325 mph red line) I guess that’s OK too. I suppose you may as well aim 175 mph above an attainable speed as 100 mph above it. But if fuel consumption is allowed in the reckoning then so should ‘cruelty to cats’.

The Tremec is rather noisy in 1,2 and 3rd, does not shift easily. I find that if I shift at very low rpm (not more 1500) shifts are easier, giving lots of time for the synchros to equalise between shifts. Fortunately the V12 is quite happy to shift at those low rpms with all the torque its got.

The Tremec should shift quite smoothly and quickly at any rpm. Perhaps you are running a conventional gear lubricant which would result in the symptoms you have. These gearboxes (in their later iterations since the '90's) are designed to run automatic transmission fluid (yes really). The synchros are a fiber type which do not at all like conventional gear oil. Check out the Tremec website for verification.

bitsobrits wrote: ↑
Wed Oct 30, 2019 4:48 pm
These gearboxes (in their later iterations since the '90's) are designed to run automatic transmission fluid (yes really).

I'm aware of the need for the Tremec to run an ATF based oil. I did receive instructions that said so. The manual transmission on my Land Rover Discovery 1 and 2 also uses an ATF type oil (MTF94).

Its too long ago that I installed the Tremec and can't recall exactly what ATF I used.