As part of a Fuel injected V12 6.0 litre manual conversion I have bought a new 6.0 engine which has already been fitted with all the E-Type conversion parts. It turns out that the block has also been drilled and tapped for both the early and late gearbox stud patterns.

I had planned on fitting a Tremec T5 5 speed gearbox but the engine has come supplied with a bell housing which bolts straight onto the engine using the earlier stud pattern which is the same as the 5.3 V12 used in the E-Type. After extensive research on the web I am sure this is for a Getrag 265. I was under the impression that Jaguar never made a manual V12 (except the E-Type) so I am confused that I have a bell housing which looks like it fits between a Jaguar V12 engine and a 265 without any adapters.

Sorry, perhaps I wasn't clear - I meant a V12 manual other than the E-Type. i.e. cars fitted with a Getrag 265 by Jaguar.
1965 Series 1 4.2 FHC - Opalescent silver blue metallic with grey interior
1974 Series 3 5.3 Auto DHC - Sable with biscuit interior - something which has to change!
Show post links
Top

Hello,
If you can't get a good answer, you might consider to ask Automobile Individuell Peters in Rödermark/Germany.

Mr. Peters sen. told me that he was the first to combine the E-Type engine with the Getrag gear box. Many years before, he was a Jaguar dealer as well as a BMW dealer at the same time and when the early E-Types had problem with their gear box, he used the BMW box that came from GETRAG. Pretty knowledgeable person. So I guess that he also knows a lot about the later 6.0L engines.

I do have a such bell housing on my V12 without any adapter plate: 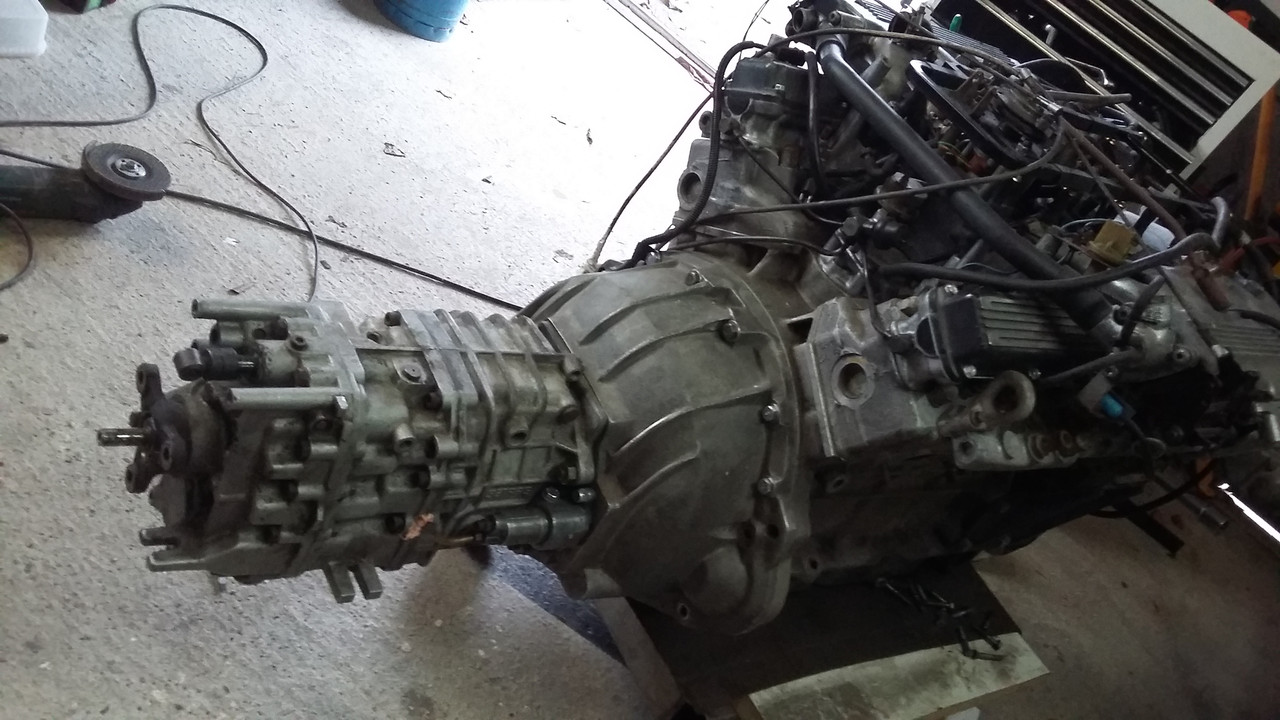 But I dont know if it is a jaguar one.
Le chemin sera long!...
Show post links
Top

Interesting. This is different to my bell housing. Are there other engines which share the V12 bolt pattern?
1965 Series 1 4.2 FHC - Opalescent silver blue metallic with grey interior
1974 Series 3 5.3 Auto DHC - Sable with biscuit interior - something which has to change!
Show post links
Top

I have a 265 on my 1971 V12E, it uses a bell housing that requires no adapter. I bought it years ago and I have seen them advertised from time to time since. It has “DJB” cast into it, but I have no further information on it. It works well, but I did have to shorten the sleeve around the input shaft, along which the clutch release bearing slides as it was fractionally too long. I think it’s different to the one on Michel’s car, I’ll see if I can find a photo.

I had to make my own linkage to get the gear change to emerge in the right place.

Thanks for the reply.

A photo would be great. How do you find the gearbox?
1965 Series 1 4.2 FHC - Opalescent silver blue metallic with grey interior
1974 Series 3 5.3 Auto DHC - Sable with biscuit interior - something which has to change!
Show post links
Top

JaguarSport / TWR made a handful of Getrag V12s so it could be from one of those. You hopefully have the release mechanism too?

The Dellow bell is still made in Australia AFAIK, in various versions for T5, 265 etc.

Thanks for the info.

It could be a TWR bell housing. Unfortunately there is no release mechanism but making one should not be too tricky or I could use a hydraulic bearing. I could also modify it to allow me to use my T5 box (ex TVR) but it seems a pity to butcher a perfectly good bell housing for a 265 when I can buy one designed for my T5 and the V12.

How good is the Getrag 265 behind a V12 or is the T5 a better bet? Should I look for a Getrag 265 or consider selling the bell housing and stick to my original plan to fit the Tremec T5?
1965 Series 1 4.2 FHC - Opalescent silver blue metallic with grey interior
1974 Series 3 5.3 Auto DHC - Sable with biscuit interior - something which has to change!
Show post links
Top

Pictures aren't uploading from me at the moment, I don't know why. I didn't take many at the time, but later found an advert on eBay for a gearbox with the same bell housing with some photos which I copied and still have. One of the photos actually (and cheekily) turned out to be of my car, probably lifted from this forum where I posted some pictures a long time ago. I think he used it to show what the required linkage should look like.

I found my gearbox on eBay in about 2004, it came with the gearbox, clutch, new flywheel, slave cylinder and the DJB Bell Housing, plus a second hand prop shaft. I was told it was from an AJ6 engined XJS, but I'm not sure about that now, as I have seen these gearboxes since and they have "JAGUAR" cast into them - mine doesn't. It cost £700 at the time and I had to source a rear mount (SNG had some, I don't think they still do), then make my own gear linkage to bring it out in the correct pace. I bought it from a fairly well known Jag V12 specialist and engine rebuilder, who later rebuilt my engine for me. I had a new propshaft made for about £200 and it was a work of engineering art.

The linkage and gear stick was relatively easy, after a bit of lateral thinking, I do have good pictures of that, but the bell is very different from the photo in Michel's post. I was converting from Auto so had fairly major changes to make to the tunnel cover, but this item is bolt on - I required no modification to the car structure at all - a replacement cover is all that would be needed to go back to standard. The linkage took up some space, but all fits under the standard centre console. A 5-speed Getrag pattern, original style gear knob was available from SNG. Mine is a long Getrag, with a long extension, there are others with a shorter extension which would need a different rear mount.

The gear change is tight and unpleasant to some, particularly into Reverse. However, it's actually very satisfying to me when I get it right (which is virtually all the time - drivers new to the car have to get used to it). I describe it as very Germanic and like a rifle cocking mechanism. I see all the arguments about 5 speed conversions, but I am absolutely delighted with my budget conversion from Auto to Manual, with 5 speeds, for under £1000. This weekend I got track time at Phillip Island Circuit - only the cavalcade, but I used all the gears on the track (except reverse!), got over 100mph on the main straight and cruised there and back at relaxed, low and fairly economic revs, mostly in 5th gear. Third gear is FUN. I have a 3.07/1 differential. The car has been roadworthy since 2011. I could never afford or, more importantly, justify £8000 for a conversion, or even half of that probably.

Sorry about the pictures, I'll try again later, but they simply will not load from either pc or iPhone.

It came with a purpose made bell housing, Fidanza lightweight flywheel etc. I'm not sure I can recommend the TKO500 transmission, it whines in 1, 2nd and 3rd and the throw is very short and "reluctant".

Thanks for the information the TKO. I had thought about this box but it is quite expensive and the kit to relocate the gear lever adds a few £ to the price as well. The whine is enough to pout me off.

On the plus side it looks like neat installation and the economy must be far better with the low 5th
1965 Series 1 4.2 FHC - Opalescent silver blue metallic with grey interior
1974 Series 3 5.3 Auto DHC - Sable with biscuit interior - something which has to change!
Show post links
Top

The Getrag was designed for a very heavy knob, or requires a heavy gear knob to make up for its notchy change - take your pick. It's the size of a tangerine and feels like lead but obviously isn't. I fitted a 265 to an S2 using the small adapter ring that lets you fit it to any 4-speed Jag bell-housing. That makes it a cheap upgrade from existing 4 speed or an auto 6 cyl where you already have a Jag bell, flywheel, clutch and starter. There's a German guy who comes to Stoneleigh and sells linkages to bring the lever out correctly, although auto converters can use the existing console and have it emerge where the selectors is.

Getrags on V12 bells are trickier because the Getrag has a pusher slave on the wrong side.

I have no experience with the Getrag box but personally if I had the opportunity I'd put in a modern box that is easily available and had good parts and service backup, so I'd probably go for one of the Ford boxes.
Andrew.
881824, 1E21538. 889457..oops. Jezza the V12 XJS race car.
http://www.projectetype.com/index.php/the-blog.html
Adelaide, Australia
Show post links
Top

The gear knob from SNG, which I described in my earlier post, is very heavy, although being only the size of the original, possibly not as heavy as an original. The home made linkage may not be the best, I saw the guy selling linkages at Stoneleigh years ago, but he had sold out and it was my last visit before emigrating. My linkage was made from scrap pieces of metal, with a stainless steel gear lever salvaged from a barbecue grill. The gear knob was the most expensive bit by far.

I would fit a modern box if I could find and afford one which I thought was worth it, but my conversion was much cheaper than finding an original manual, remember I was converting from auto. Anyway, I’m really pleased with it and it’s definitely better than auto.

From the eBay advert: 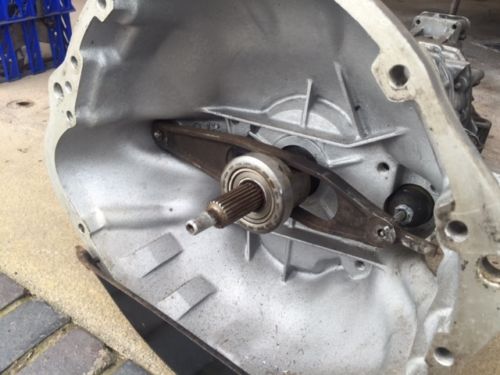 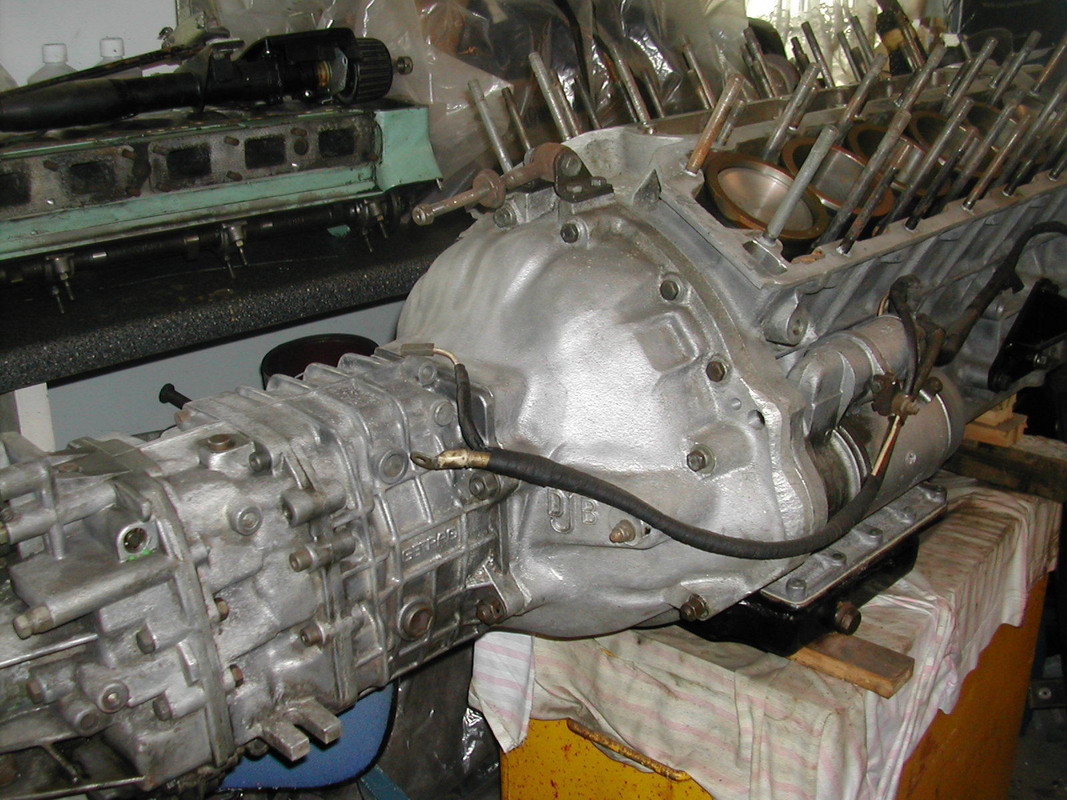 This is from the eBay advert but is actually my car: 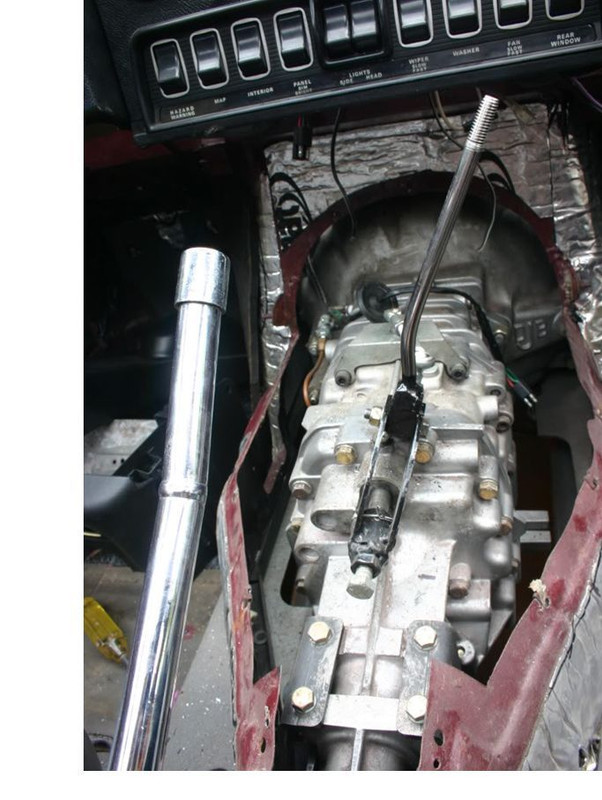 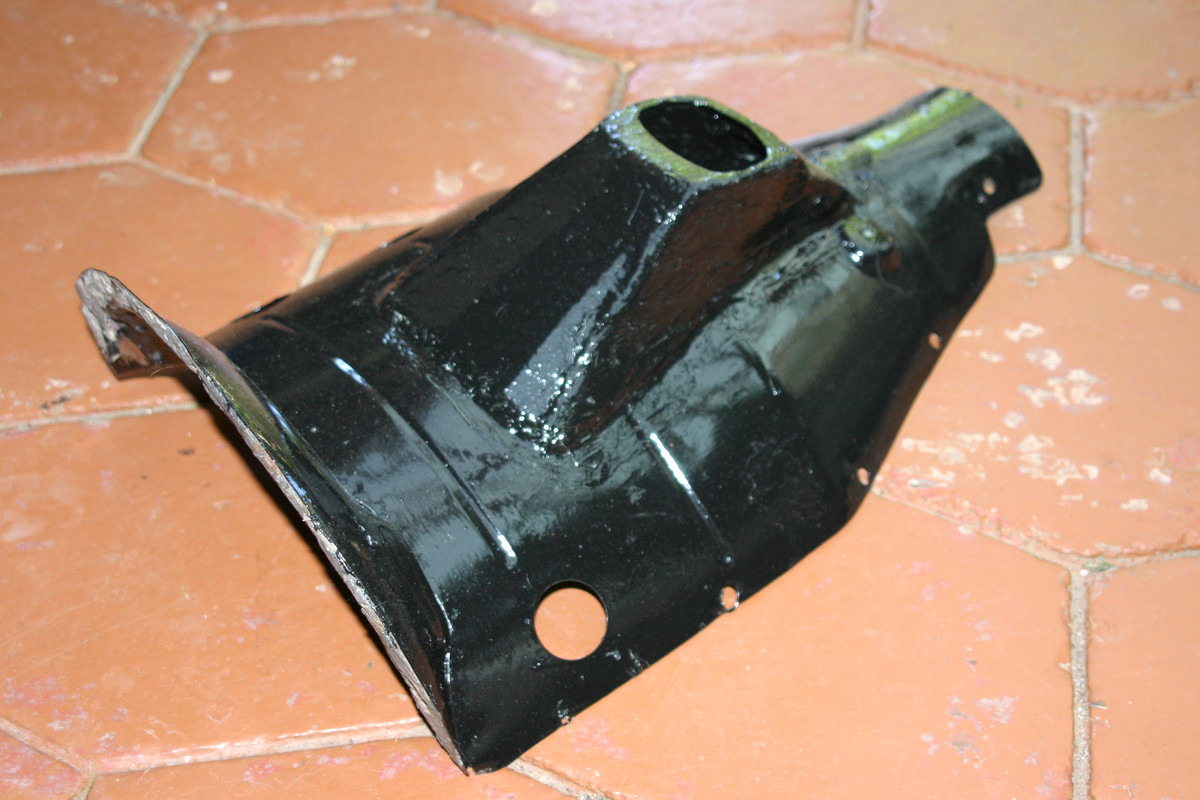 On the crane when fitting to the car: 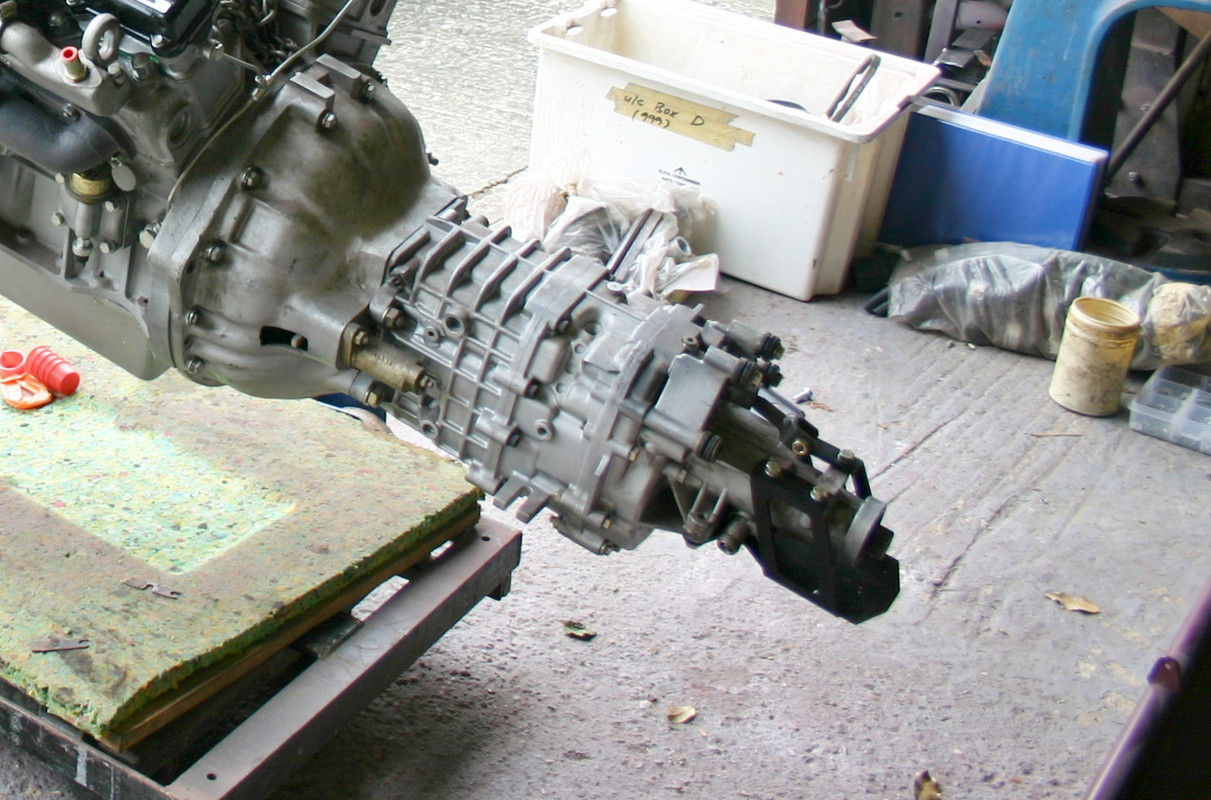 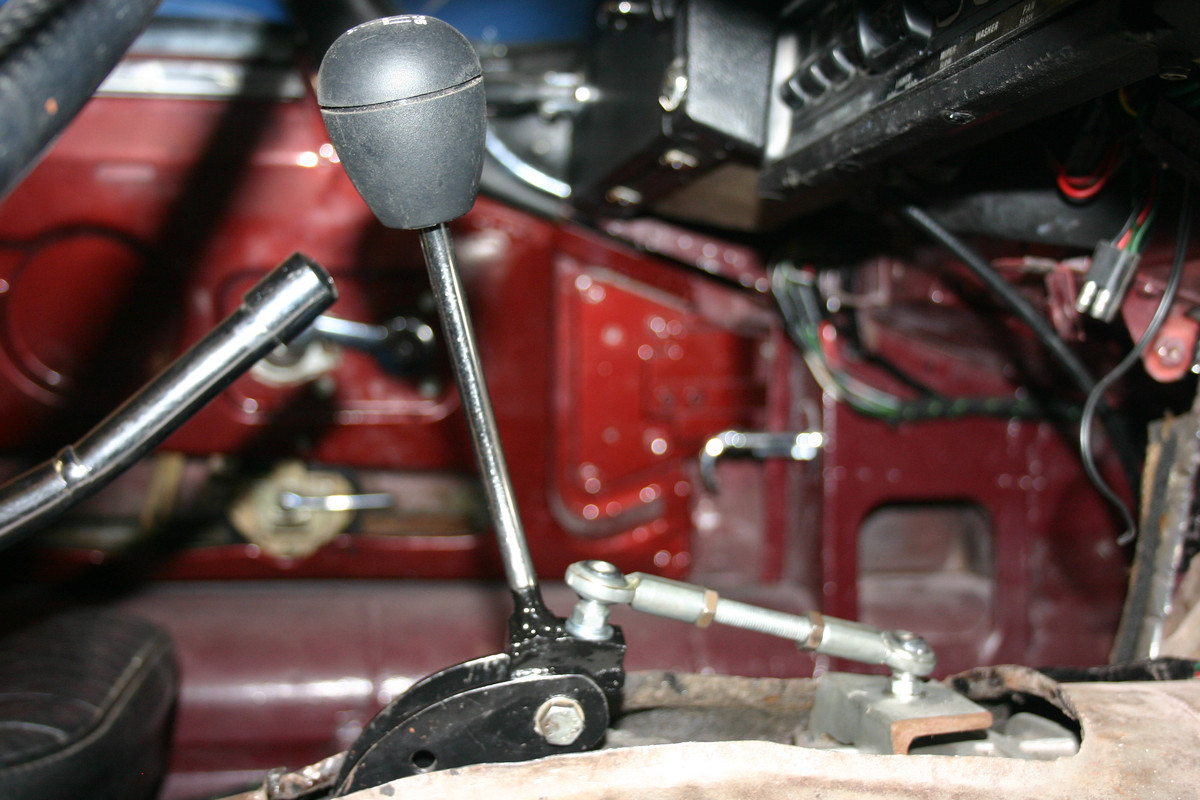 That looks the same as my bellhousing. The photo of the clutch fork is very helpful.

I suppose the most important question is do you like the gearbox?
1965 Series 1 4.2 FHC - Opalescent silver blue metallic with grey interior
1974 Series 3 5.3 Auto DHC - Sable with biscuit interior - something which has to change!
Show post links
Top

I like the gearbox, but I don’t believe it’s the best option. However, it is possibly the best value option. Do be aware that I had to make minor modifications to the tube around the input shaft.