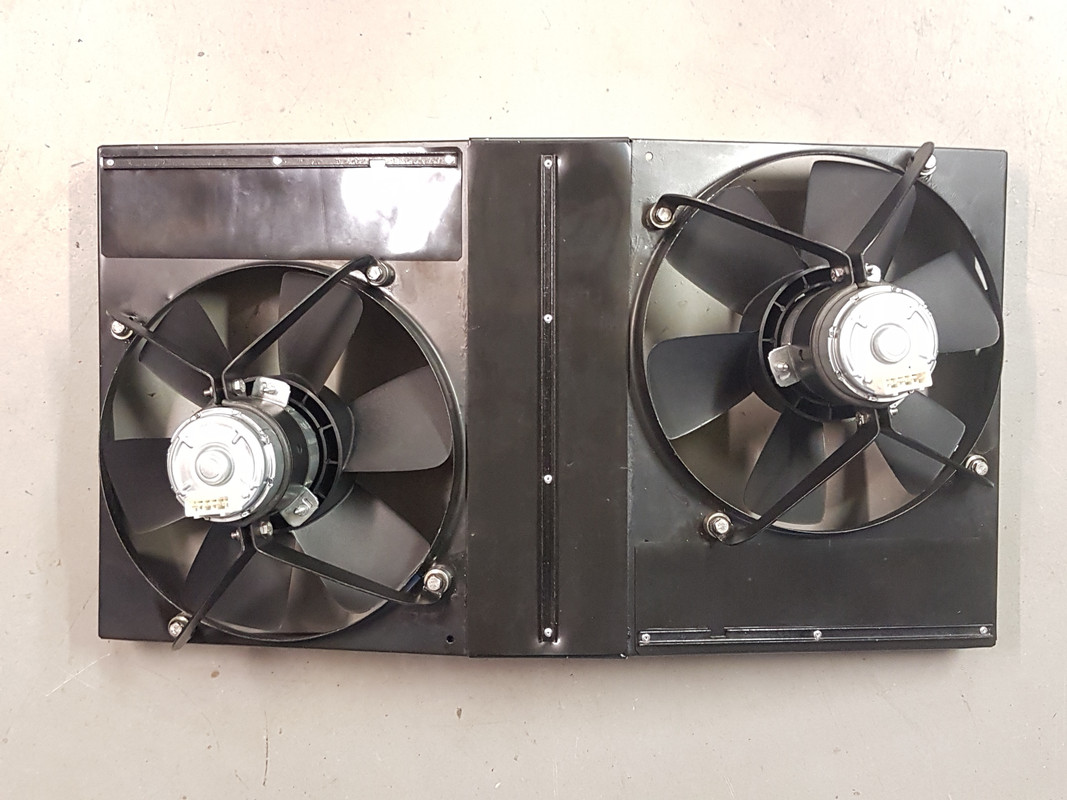 Nice job, I did the same mod with the VW fans.
Use relays to power the fans when you wire them in, you probably knew that, theres been lots of threads on it.
On high they pull quite high amperage.
Cheers
Mark Brown
1971 S3 Etype
Son: when I grow up, I want to be a pilot
Dad: You’ll have to choose.
Show post links
Top

Mark good to hear.
Did you notice that the bottom flap is reversed?
It is arranged so that DJing normal flight more air gets past the cowl, but when you put the fans on there is so much draw that it flaps shut with a slap.
Where did you wire up to ...to the relay feeds
Peter {XKE V12HE efi}
Show post links
Top

Mark,
Yes I agree with you and the previous posts. My PO had already installed an additional switch under the dash to activate the old fans independently, I shall remove this and allow my modern upgrade to the otter switch to work the low speed feed to the new fans, and use the switch on the dash to activate the high speed setting on a couple of relays direct from the battery feed, via a couple of fuses. I also plan to put an override switch, which senses surface temp, to cut in should the other circuit fail, the last thing I want is to do my eggs and bacon on the rocker covers!

The question of relay type and appearance is relevant, but maybe not an absolute priority, there are a couple of candidates available from R.S. that I shall be looking at. Watch this space.

Does the Viton sheet hold its shape better than rubber? What is the spec of the material you used? Also be interested to know if you actually ever need to switch the fans to the high speed setting given the overall improvement of the Vito and better fan blades?

Kevin,
I have run the car with the cowl as per original and in its slightly modified form, the extra air flow allowed by the very flexible viton sheet permits quite serious use without resorting to fans but when they do come on the temp drops quickly and they’re only on for a minute or so.
I tried originally with 2mm Viton sheet as this seemed to be an approximation to the original, although I did find that the OEM rubber was either 1.5mm or 2mm, the latter was on the O/S of the cowl and I thought that this might be some form of differential air flow design, the 2mm opening at higher (air) car speeds, but settled for equal thicknesses of Viton.
Viton is more temperature stable than rubber and at the same time more flexible over a much larger range also impervious to under bonnet chemicals. The disadvantage is that it is ferociously expensive. Check out the well known Auction sites.
If you would like to PM me I’ll send you some little samples....not enough to make a flap with

Just to follow up the last post.
I’ve ordered some high current relays to handle the “high speed” fan settings,I plan to have these either manually operational / automatic on an other sensor. However the placement of this sensor is yet to be decided, I have an urge to sense the engine oil temp and then switch from there.
What does everyone think. More input the better please, Forum Collective Brain (FCB) In action I hope.
Peter
Peter {XKE V12HE efi}
Show post links
Top

Thank you for the offer of the viton samples, but just checked the condition of the rubber flaps on my car and they are in good condition. I would consider changing to the VW fans though, where did you source yours?

Another good upgrade is the CoolKat temp sensor housing, highly recommended if you have not fitted one yet.

Hi Peter,
If you want sensor info contact poster MarekH. His V12 has more sensors on it than the space shuttle.
I would say why do you need the extra sensor? You have covered all the weak points with the rad rebuild, coolcat mod, the otter switch upgrade, and a manual override switch.
If you want further mods check out the Lutz mod to the water rails. Just google it, or search the forums.
Cheers
Mark
Mark Brown
1971 S3 Etype
Son: when I grow up, I want to be a pilot
Dad: You’ll have to choose.
Show post links
Top
Post Reply Previous topicNext topic
11 posts • Page 1 of 1