Setting the carburettor jet distance below the bridge

#1 Setting the carburettor jet distance below the bridge

Can anyone please recommend a way to set the carburettor jet distance below the bridge?

When I rebuilt my carburettors (a few years ago) I went to great lengths to set my new carb jets 1.5mm (60 thou) below the bridge.

I made a punch with an adjustable length (set to 60 thou) below a stop which wouldn’t go further than the bridge. It seemed to work well at the time and all four carburettors were set up the same with new needles etc. I can repeat this but wonder if there is a better way to set the jets?

I have since been messing with the carburettor set up and balancing to try and get the engine running better. Today, I again used a slim screwdriver to lift the piston by 1/32”. With the needles set midway in their adjusters (1 1/2 turns) the engine would defintately slow on lifting.

I then enriched the mixture by screwing in the adjusters 1 1 /2 turns and things are definitely improved. I also have used a Gunson colour tune plug which shows a blue colour.

The problem is that I have no more adjustment to try and get things a little more richer. My plugs are a good colour currently and in the current state things seem to be going well. I would just like to see what a little richer mixture is like.
Teddington UK. Series 3 OTS 1972. Owned since 1982.
Show post links
Top

#2 Re: Setting the carburettor jet distance below the bridge

#3 Re: Setting the carburettor jet distance below the bridge

Doddsy wrote: ↑
Sat Jun 27, 2020 8:15 pm
Can anyone please recommend a way to set the carburettor jet distance below the bridge?


WRT measuring it buy a cheap vernier caliper from EBay; you can use the tail to measure depth.

AS far as mixture goes if you have reached maximum depth your only option would be to buy richer needles.

#4 Re: Setting the carburettor jet distance below the bridge

I'm not very familiar with the Strombergs; in an SU you can simply mount the needle a little deeper into the bell but I don't think you can do this with SBs.

Hello Andrew,
Unless the Strombergs are fitted with After Market jets that are adjustable (not the case with the as supplied SB for S3 Cars), the mixture is set by moving the Needle axially in the Bell.

#5 Re: Setting the carburettor jet distance below the bridge

The problem is that I have no more adjustment to try and get things a little more richer.

Hi Doddsy - (sorry don't know your name)
I would question setting the jets to 60thou below the bridge. When rebuilding my carbs I was not able to find any Jaguar, Zenith or other source which specified the design dimension, so contacted Burlen who hold the design rights. They quoted 100thou which fits reasonably well with Zenith instructions for earlier adjustable jet carbs which give a starting position for tuning of 3 turns downwards after setting the jet face flush with the bridge.
I checked this on an old CD150 and three turns anticlock gave 93thou, so 100thou seemed sensible for the fixed jet type. 100thou (to the jet outer land - not the orifice which is 20thou lower) seems to give adequate mixture adjustment with the float heights correctly set.
Hope this helps
Bob
Bob
'71 S3
Show post links
Top

#6 Re: Setting the carburettor jet distance below the bridge

Doddsy wrote: ↑
Sat Jun 27, 2020 8:15 pm
I have since been messing with the carburettor set up and balancing to try and get the engine running better.

What ignition system do you have? Without impeccable ignition (OPUS does NOT qualify), you can tune till the cows come home....

#7 Re: Setting the carburettor jet distance below the bridge

Thanks all for the very useful advice. I have followed Andrew’s suggestion and ordered a vernier calliper so I can double check what depth I set the jets to (I recall 1.5mm 60 thou). I don’t think this was 2.5mm (100 thou) to the outside of the jet and would explain what I am experiencing.

If I need to set these deeper I would still welcome advice on how to do this. I know you must be careful of the jet orifice but I assume you can press or tap the jet deeper (carefully). Is there a tool for this?

I have the Reopus ignition system on my car which has been very dependable for the last eight years (I’ve owned the car for 38). I even have a spare just in case which hasn’t been needed (yet). I have been really impressed by the system although I know that these are na longer available. Right now she is running really well and I know that “if it aint broke dont fix it mantra”. However I do like playing with my car and am still learning!!

My first name is Nigel (there seem to be a number of Series 3 owners similarly named). However given my surname I avoid politics!

#8 Re: Setting the carburettor jet distance below the bridge

Hi Nigel.
I have rebuilt a couple of sets of S3 Strombergs but I’m no expert. However, the first effort I found it difficult to set the jets at the correct depth, I tried pushing them in and measuring, then adjusted to suit. Basically trial and error.

I damaged the top of one jet when trying to push it back down so on the next set I measured the protrusion of the lower part of the jet to the body. Being in quite a rush, I then used a collection of washers which fitted around the jet, pushing it in from below with the washers located around the lower portion of the jet, using a vice with clean, plain jaws. When the washers were flush and the vice tight, the jet was at the correct depth. I am sorry I have no idea what the measurements were, I was not able to check and record them at the time. A better way would be to make a solid tube to take the place of the washers and also make sure the new jet is identical to the old prior to pushing them in. If I did it again, that’s how I’d do it, obviously checking each jet after the operation. In my case, my rather rough and ready method worked very well. I may have photos to demonstrate, but I’ll have to check later and maybe post one or two.

#9 Re: Setting the carburettor jet distance below the bridge

Hi Nigel
I imagine a small arbour press would be the ideal tool for the job and heating the bodies to about 200°C would reduce the interference fit, but I did it at room temperature and by drifting.

If starting from scratch press/drive the jet in from the float chamber side. With the carb inverted and the bridge supported, position a 100thou (2.5mm) thick plug with an outer diameter such that it is slightly loose, at the bottom of the bore. I used a stack of washers, brass nut or whatever gave the right thickness. The plug will be flush with the bridge and ensure the jet will be limited to the recommended depth when driven in as far as it will go. Burlen gave a tolerance of ± 0.3mm.

If starting with the jet too high, again use the plug with a hole in the centre (this will ensure contact is only made with the jet outer land and not the orifice and also aid removal) and support the underneath of the bridge by a thick, large diameter washer around the jet and a long socket or thick walled tube beneath that. With a large diameter drift bevelled at it's outer diameter to prevent marking the bridge if used off centre, drive the plug down so that it is flush with the bridge. I had to do this as initially I had set the depth of 2.5mm to the orifice rather than the outer land.
This picture which I have just gleaned from the net shows how to support the bridge from beneath although I used a thick walled tube rather than a socket.
Hope this helps
Bob 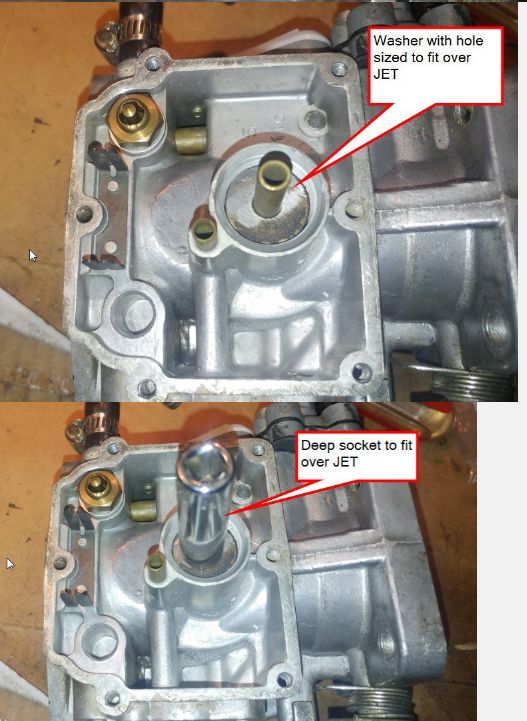