What are the chances of getting an overdrive box for an S3?Is it a straight forward fit?
S3 Roadster Manual
07 Vanquish S
07 Vantage Roadster
74 Triumph Stag
66 Scimitar Coupe
He who dies with the most toys wins.
Show post links
Top

Thanks Steve,I was thinking about buying an S3 box,complete with overdrive,& installing it,as mine has to come out anyway.Not interested in 5/6/7 speed boxes,just 4 speed,& a lazy flick of a switch.The question was,will it fit?Are they available?
Thanks,Neil
S3 Roadster Manual
07 Vanquish S
07 Vantage Roadster
74 Triumph Stag
66 Scimitar Coupe
He who dies with the most toys wins.
Show post links
Top

Is straightforward when yr S3 is manual if you buy an xj6 OD box for the parts, just swap the mainshafts and replace extension housing with the OD, screw on an extra switch, job done. Dave from OD Spares in Rugby is recommended for sourcing parts and refurb.
Here is pic of S3 box with OD added, foreground is the removed original shaft and extension housing. 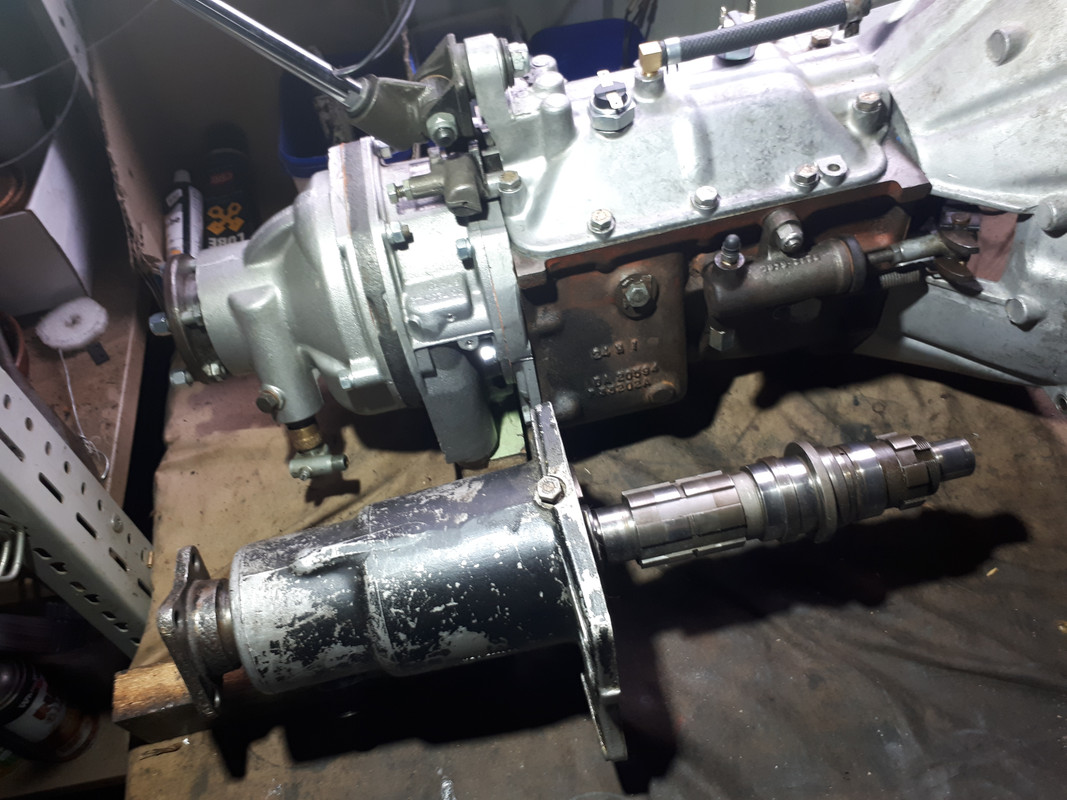 One of the earlier posts was a reference to my questions from a couple of months ago when I was planning to fit an O/D box - it's all in now and working so feel free to message and ask anything - happy to help.

What about the Speedo cable and drive? does that swap over?
Cheers
Show post links
Top

There are some Overdrive adaptor plates on ebay,I have put a link on for sale section.
Gearbox,overdrive unit,& various parts are off to Overdrive Services in Sheffield tomorrow.
S3 Roadster Manual
07 Vanquish S
07 Vantage Roadster
74 Triumph Stag
66 Scimitar Coupe
He who dies with the most toys wins.
Show post links
Top

Another Q, don't know much about these.

Does the overdrive give a rear wheel speed higher than 4th? per engine RPM when engaged or does it place the engaged output ratio between existing 3rd and 4th gear?

I always thought that these shifted down rather than up when engaged, meaning the latter would be correct and I am not sure of what use in this application as we are not desirous of a "pseudo 5th" gear which would be the former?

What happens if you make it come on when you are in third?

Hi....its a 5th gear above 4th......so when doing say 70mph in 4th you engage o/d your revs drop so less revs and you can keep accelerating......flick out of overdrive so automatically drop to 4th so you can pull away or overtake....not sure if there is an inhibitor switch to stop it opetating in 3rd but some cars have it and as above you get an extre gear between 3rd and 4th......Steve
Steve
1969 S2 2+2 & Building a C type replica
Show post links
Top

The first couple of digits of the serial number tells you the percentage drop in gearing.

It is a coincidence that this is roughly the same percentage as the drop from 3rd to 4th and 2nd to 3rd of the standard Jag box, so there is no mechanical advantage in engaging the overdrive in 2nd or 3rd gears as the car's 3rd and 4th gears could be manually engaged instead with the same effect. The drop from 1st to 2nd is slightly wider, so engaging the overdrive in 1st gives you a gear "one and a half" and a more rapid take off in a traffic light grand prix start. This might come at a cost to the longevity of the friction surfaces inside the overdrive.

The gearbox top cover has two switches, one is engaged in reverse gear and the other if in 4th gear, so the usual way to wire up the overdrive is to lock out its use when in reverse and allow it's selection when in 4th.

Just as an example of how it can be done.
An XJ series 2, 4 speed with overdrive installed in my 1974 S3 and controlled by a push button in the gear knob that sends the on/off pulse to the control box behind the glove box.

This is great thanks for all the replies

My only concern then seeing as its the reverse of what I thought is that if you are cranking away on some long distance freeway run in a US stylee, you could be with your solenoid OD engaged for many hours (well as long as your fuel lasts). In electrical theory, this is opposite of good practice no?

Otherwise its all dandy, thanks again.

I like that red hood in the video, tell me Sir, do you have the velcro strips behind the doors???? I still cant get someone to tell me whether that is how they should be???? If my little old MGB doesnt need velcro strips why the hell does an e-type....
Show post links
Top

Once open the soleinoid is held open by a very small holding current.

The Jag 4 speed is a wide ratio box. If you applied OD in all gears, called “gear-splitting”, this is what you would get:

Assumption is that the weakest part of these ODs is the friction surfaces. These surfaces do not transmit any engine torque, they are to prevent the OD freewheeling when decelerating (engine braking). Without the friction surfaces it would be as if, every time you lifted your foot off the accelerator, you simultaneously jammed your foot onto the clutch.
While the friction surfaces may appear small, they are plenty big enough, the maximum load the friction surfaces need to carry is relatively insignificant, especially if OD is only used in 4th.
Gear splitting could, as Marek points out, increase the rate at which these friction surfaces might wear - they are just a conical clutch.
US spec e-types and all subsequent V!2’s were fitted with large gulp/deceleration valves (C34018, EAC8619). If gear-splitting is intended, retaining or retrofitting such deceleration valves might be enough to ensure that the OD friction surfaces do not wear unduly.
In this earlier post we debated the whether the Jag OD would be strong enough for spirited gear-splitting. The widely expressed reservations convinced me not to attempt this, at least initially… viewtopic.php?t=12072
Regards,
ColinL
'72 OTS manual V12
Show post links
Top

I like that red hood in the video, tell me Sir, do you have the velcro strips behind the doors???? I still cant get someone to tell me whether that is how they should be???? If my little old MGB doesnt need velcro strips why the hell does an e-type....

My car has the Velcro behind the doors. That’s how I bought the car in 2010 and that is believed to be original. Some have snap locks as well, which I believe is for when you have a boot to cover the hood when it’s down.
1974 SIII E-Type w. XJ S2 4sp w. O/D
Show post links
Top
Post Reply Previous topicNext topic
18 posts • Page 1 of 1