Is t possible/permissible to remove engine and gearbox as a single unit from a v12 OTS. I have two or 4 post lifts available.
I started to fix a small bit of corrosion, then it all developed a little bit into a full bodywork job...hence the need for shell only shot blast.
Peter {XKE V12HE efi}
Show post links
Top

It’s a straight forward job to remove engine and gearbox with the bonnet off by using an engine crane.

I don’t know if the V12 can be lowered through the frames.
Show post links
Top

You can lift engine and gearbox out together, but it’s a very heavy assembly. It’s also very long and you will need a substantial crane to be up to it. The auto gearbox, if that’s what you have, is even heavier (by a great deal). The engine is too wide to drop between the frames like a six cylinder version, but you can remove the upper frame directly forward of the engine, where the expansion tank is fitted, reducing the height clearance needed as the engine can remain quite low. Due to the overhang at the front, where the bonnet frame fits, you either need an overhead block and tackle (roof beam mounted) or to remove the bonnet frame, otherwise the reach of engine crane jib required is enormous and probably difficult to find. Remember the longer the beam of your (wheeled) crane, the greater it’s capacity needs to be, since the extra length multiplies the weight being lifted. The legs of the crane also need to be long to prevent the crane tipping forward.

My crane just managed to fit a bare engine (no starter, alternator etc.) and Getrag gearbox, I don’t know how the weight compares to a standard unit. The crane had a SWL of 500 kg, but when the jib was fully extended (which it had to be), this reduced to 250kg, which, strictly speaking was rather too low. I had the bonnet frame off and had someone act as a counter balance for the crane, which at full extended jib was on the point of tipping. I kept the crane still and wheeled the car under the engine/gearbox. It’s not a method I recommend, but I was working with people I knew and trusted and we were very careful not to put any part of our bodies under any part of the suspended load. The car was largely dismantled and the gearbox cover off. Once the engine was near position, we supported the tail of the gearbox to take the load from the crane, before tackling the fitting of mounts etc.

Access is pretty poor, even for a bare engine, so it would be worse if ancillary components were still fitted.

I have removed and reinstalled my engine and gearbox as one unit quite a few times by myself and it is a relatively quick and easy task with a standard mobile engine crane. As mentioned when it comes out it is all a bit top heavy and can tip so be careful.

I remove the radiator and top cross member to provide forward clearance. I found it is important to have lifting chains of the correct length as specified in the workshop manual as this keeps the engine and gearbox at the correct angle for removal. You need to lift the back of the gearbox to clear the power steering rack - watch the metal pipes.

Thanks all. Really helpful.

Thankfully I don’t have to worry about weight as I have a jcb teletruck with an extension fork.....phew!
Peter {XKE V12HE efi}
Show post links
Top

It's not too difficult to remove as one unit. Lift the engine so it just clears the steering rack, remove the gearstick and angle the whole unit to come out under the bulkhead. I attach some photographs to illustrate the process. 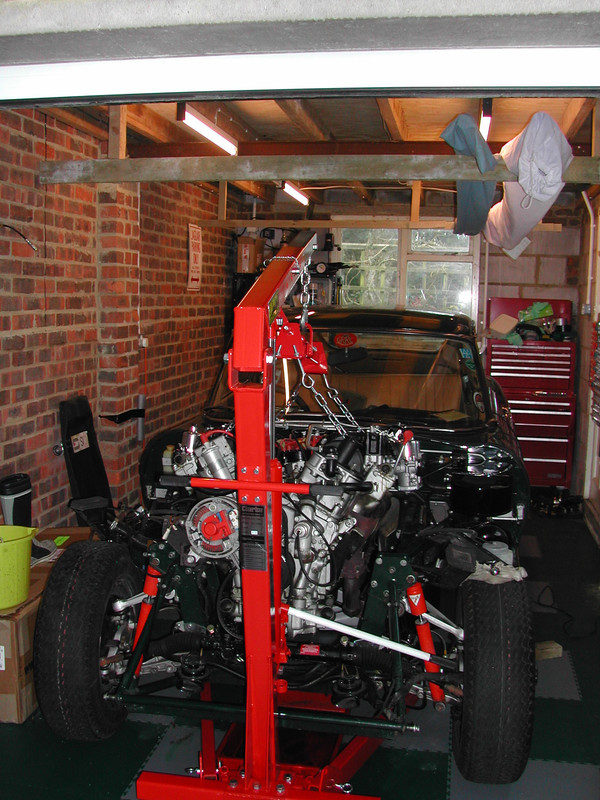 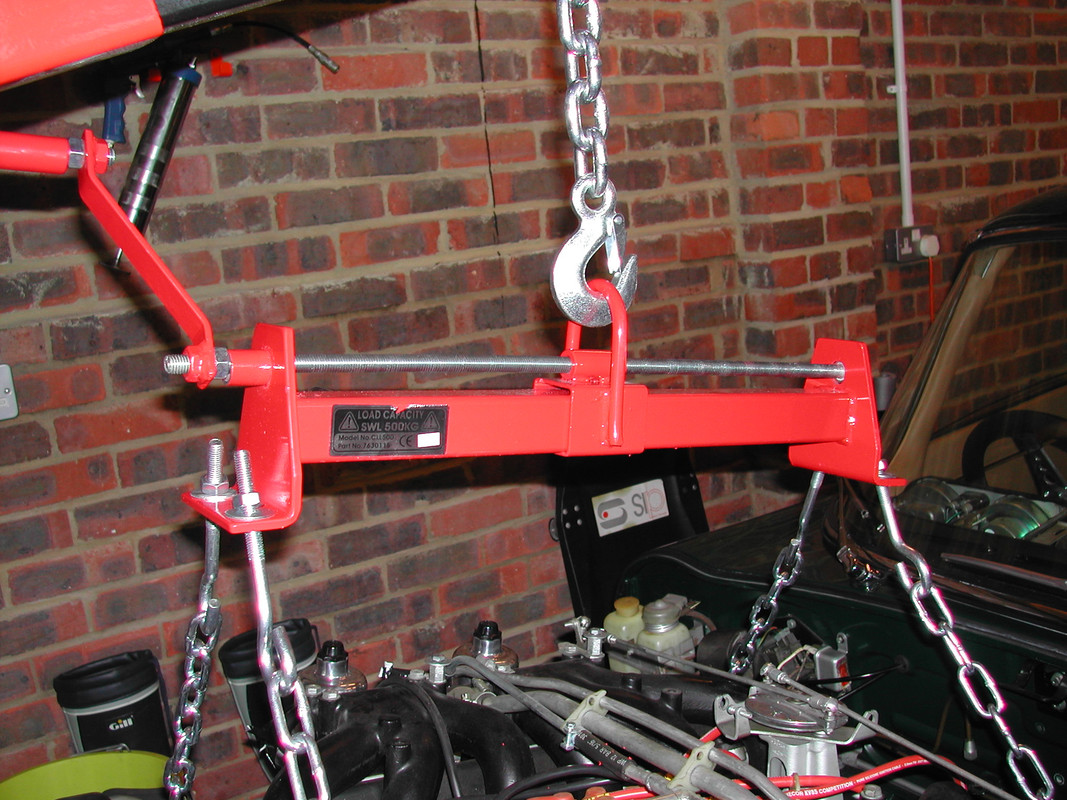 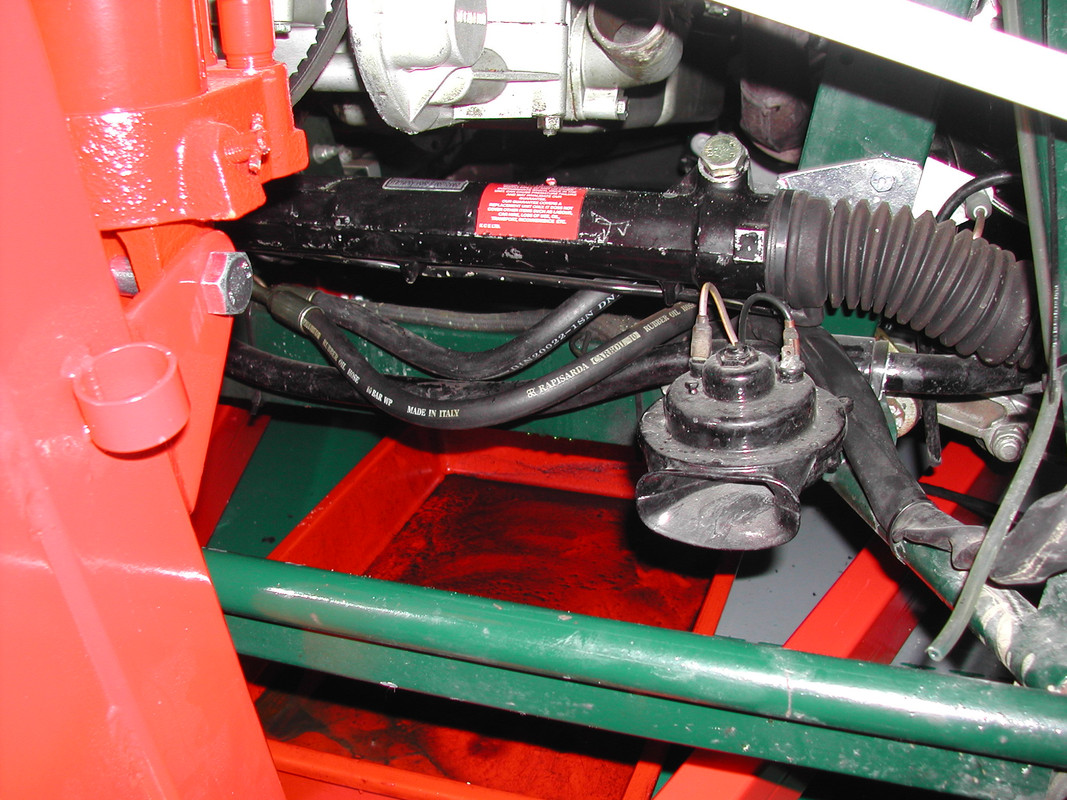 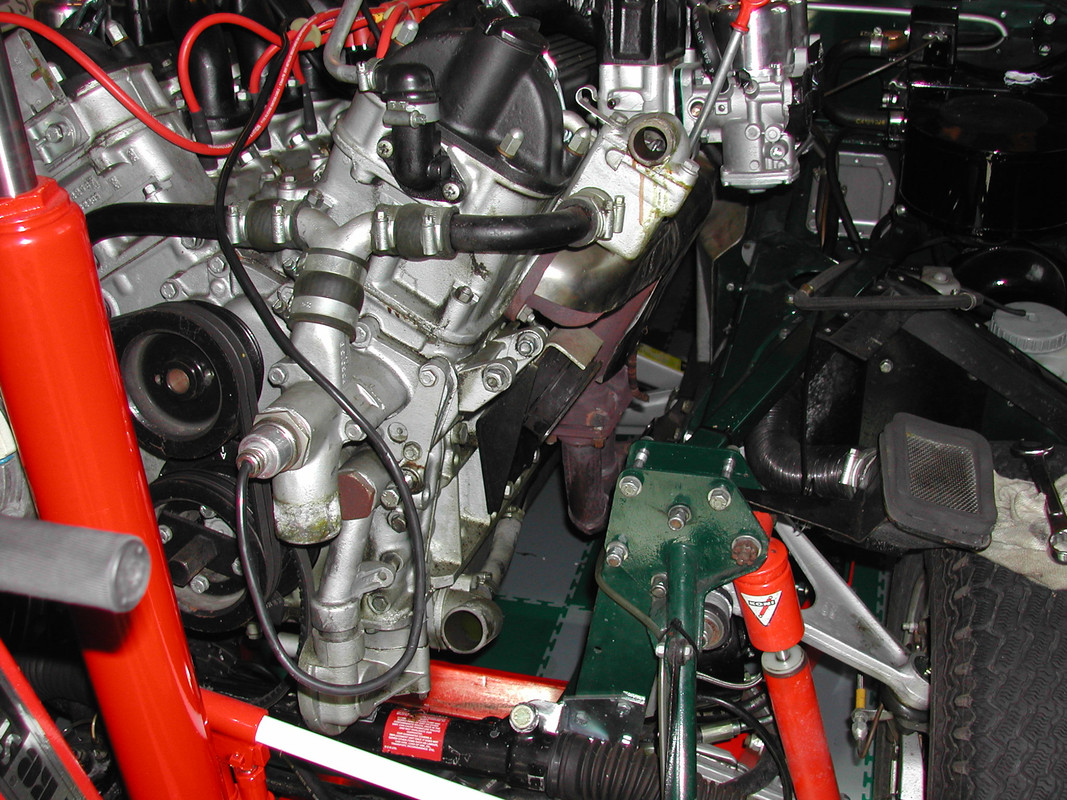 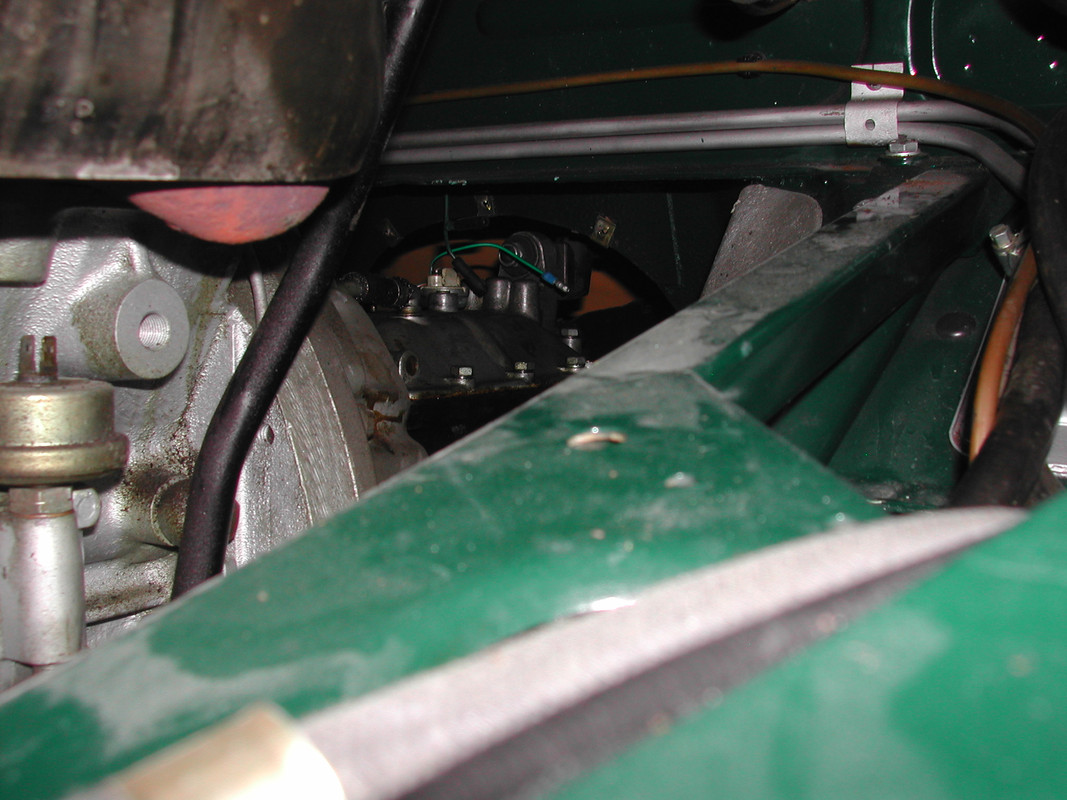 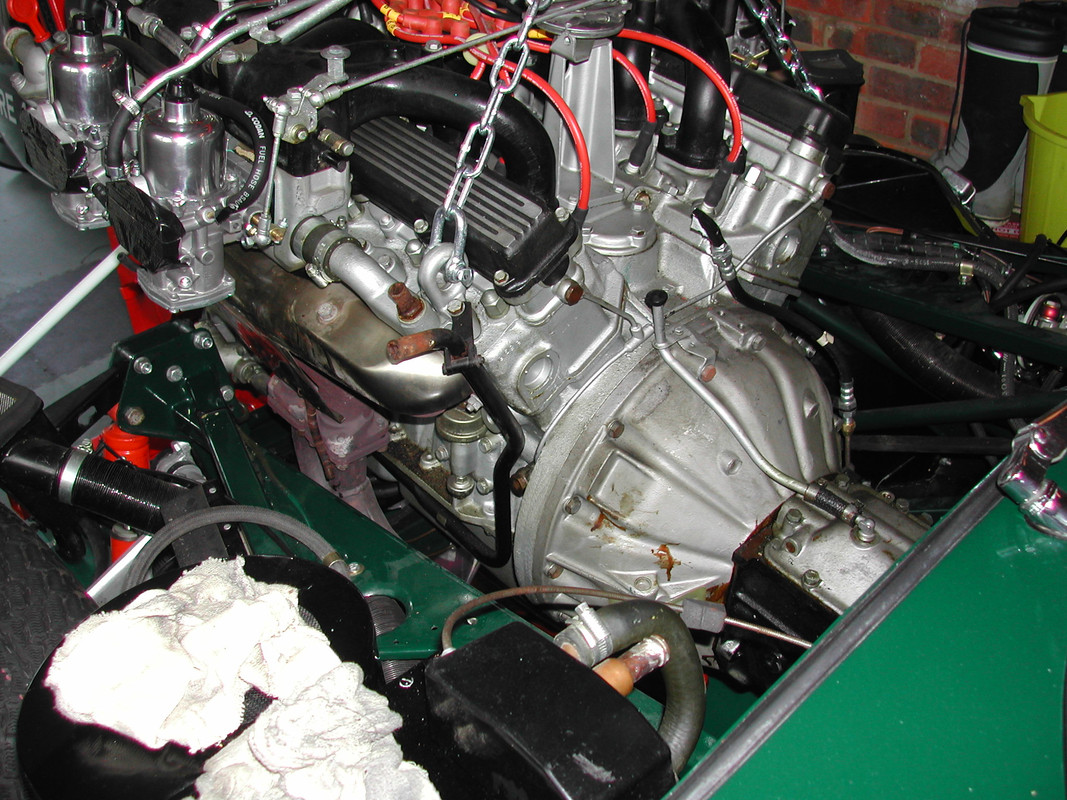 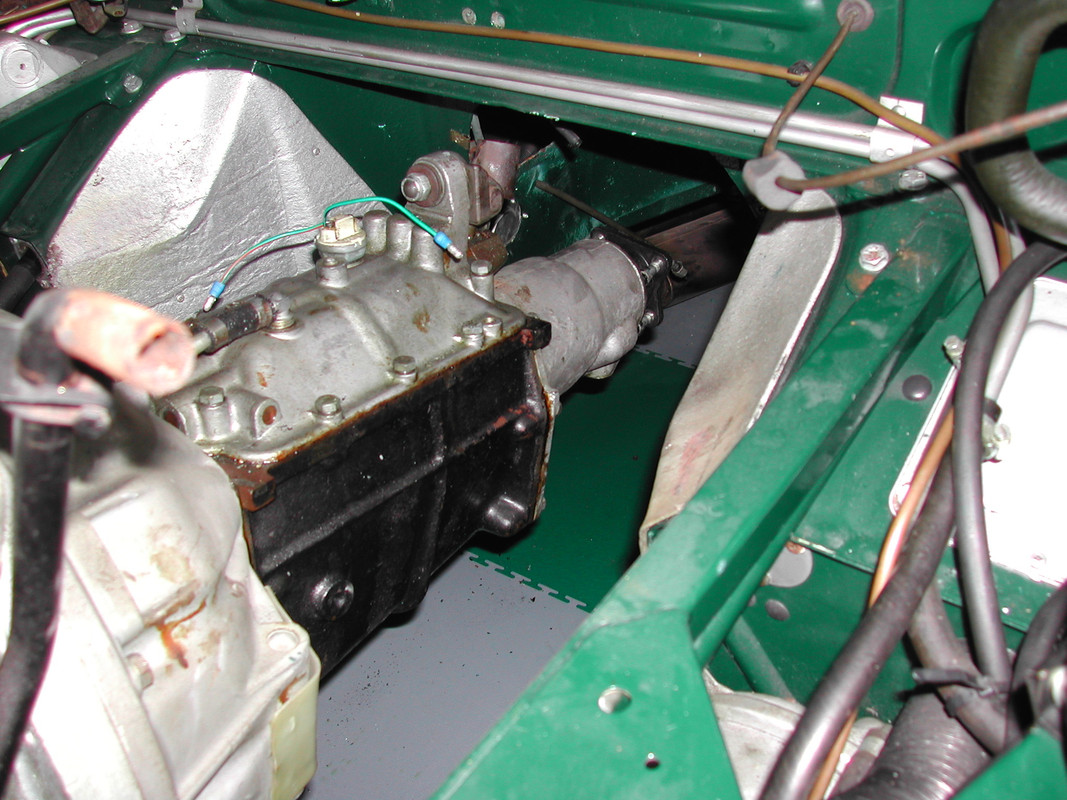 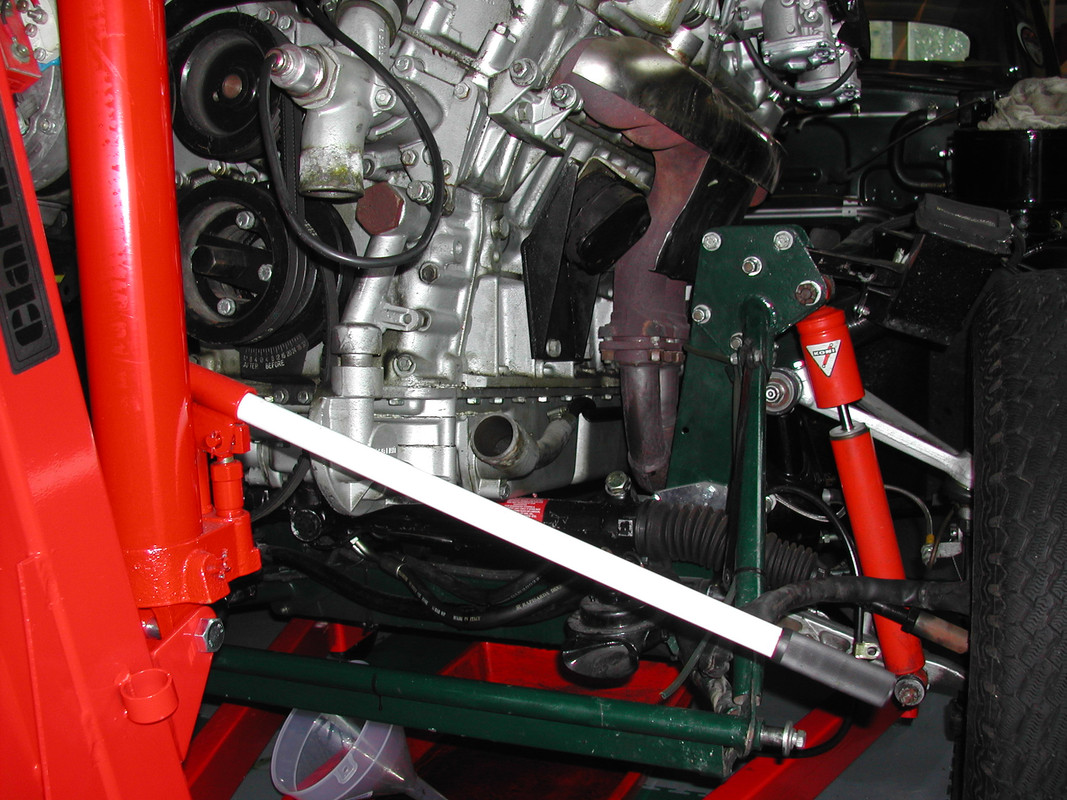 Bob,
Thanks for those very helpful photos.
A couple of things are interesting. Is that a Bray heater I can see ,? Where did you manage to get one of those? I’ve been looking for a while. I notice that the inside of the water channels seem lovely and clean judging by the inside of the thermostat housing on the n/s, did you have the engine spruced up inside and out with soda blasting perhaps? I used to own a Soda Blasting Co and I know the results are great.
Where did you get that engine lift bar?
Thanks again, good old forum !
Peter {XKE V12HE efi}
Show post links
Top

I bought the Bray Heater back in the late 80's; I can't remember the details but it was through someone in the JDC and Vicarage Cars either made them or had them made. They were made to order so I would imagine there are very few around not being used.

The heater just keeps the coolant mildly circulating by convection hence the clean water channels, that and flushing every two years.

I spruced the engine up also in the late 80's when I had the body rust removed and the shell taken back to bare metal.
Having owned the car from it being just over a year old (it's a 72 model) I've been able to look after it and make the odd modification in that time.