I could be wrong, it has been known, but I don't think speakers were fitted in the radio console. Speakers were fitted, one each side, in the side panels behind the driver and passenger seats.
Pete
'71 S3 2+2
Show post links
Top

And as I've yet to find a radio I'm happy with anyone got a good suggestion? Did see a chap at NEC who fitted modern guts into 70/80's shells, just no way can bring myself to throw a modern radio into the car but kids now want some music in the car when we use it!!

What were the original radios fitted and speakers for that matter or were these a dealer fit option??

I saw these guys at the Classic Motor Show whilst at NEC but wasn't convinced by the Chinese quality of the fascia!! Difficult, there was a chap who rebuilt original units with modern receivers and jack plugs for the iPod etc, not even sure I want a digital display, only music would probably use is the iPod.
http://www.karcher-center-chemtec.co.uk

If it's any help, these are the speakers fitted to my early 1971 series 3...behind the seats

As has been pointed out by others, there were no speakers in the console, although you might be able to get some in there if you try. The car is actually wired for speakers in the location shown just behind the door and, if fitted, that would be where Jaguar fitted the speakers. It is possible to get some fairly decent speakers into that location, although I had to trim the speaker chassis to get them in, see the post David recommended:

Page 2 shows my own solution, I used a modern radio, I think identical to the one David used, except mine had no leaper on the front. It came from USA - Custom Autosound was the brand I think and looking recently, there are more options available now. No fascia was supplied at the time, so my front fascia is a simple piece of brushed effect stainless steel, achoice of black or silver knobs were supplied, I found a combination of the two worked best (there are two parts to each knob on each stalk, I mixed the colours on each and it seems to emulate the style of the time).

The photos in the thread don't do it justice, although I will look for an old radiomobile to rob the fascia from one day (I used to have one, but chucked it out a few years ago....!). I'll try to post pictures of the finished unit - those posted were during the build process of the car.

Sound is reasonable, but would benefit from a small amplifier. However, as I haven't had the car on the road that long, still find the soundtrack from the right foot particularly addictive! I have considered extra speakers for the front as also shown in the other posts, I would not put them in the console, rather the opposite sides of each footwell - I question the effect of having a "Right" speaker on either side of you, and three "Left" speakers to your left (RHD car), which would be the case if you had rear speakers and console mounted speakers.

my October 1972 SIII was fitted (an still is ) with the following radio-tape player, which I believe is a period one, most probably fitted by the dealer.

the speakers are hidden behind a grille 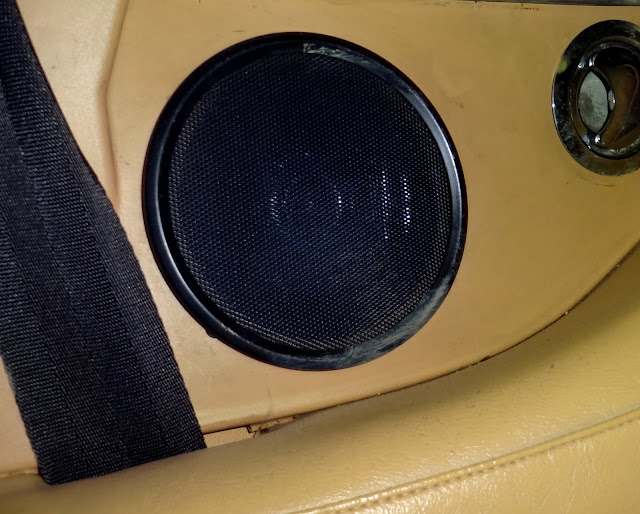 I replaced the original ones (no branding visible) seen on the pictures (membrane dammaged)
by similar size ones (Clarion). 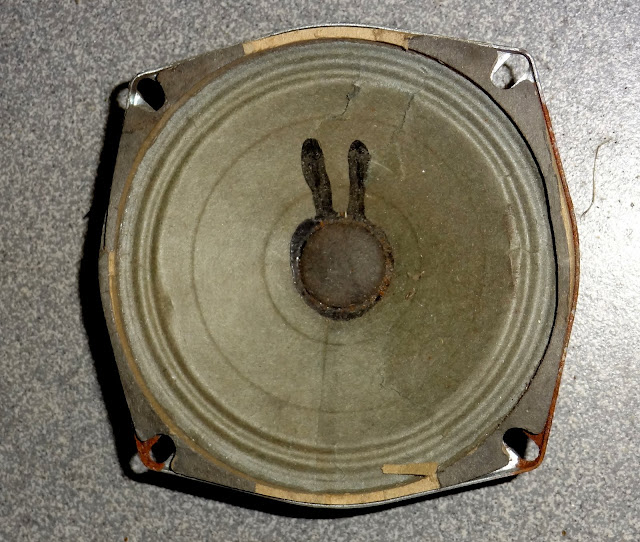 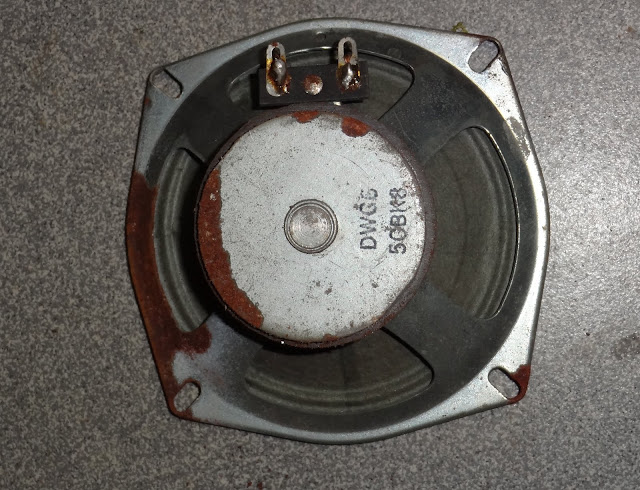 and, only when not listening to the V12 symphony, I listen to period music from early seventies coming from myIpod through a tape adapater (very chip and found on ebay). 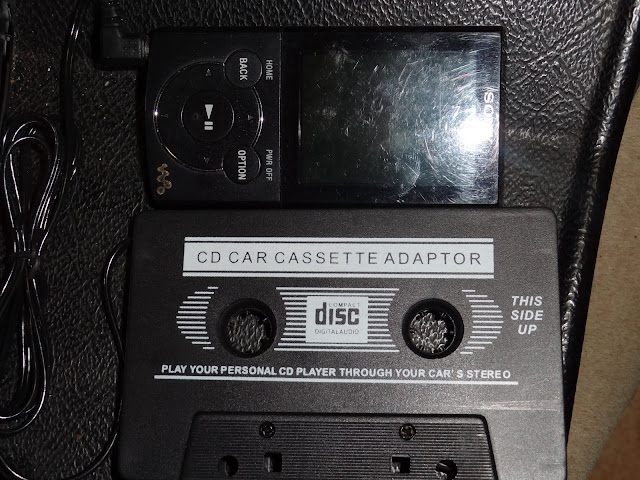 the sound is good at normal speed and when driving at 70 MPH still ok if you put it loud, but then I really prefer the V12 sound 8)


Finally from my documentation and knowledge, Jaguar was fitting the following radio player as illustrated on a 1973 Jaguar folder, other models were fitted by dealers at owners choice. 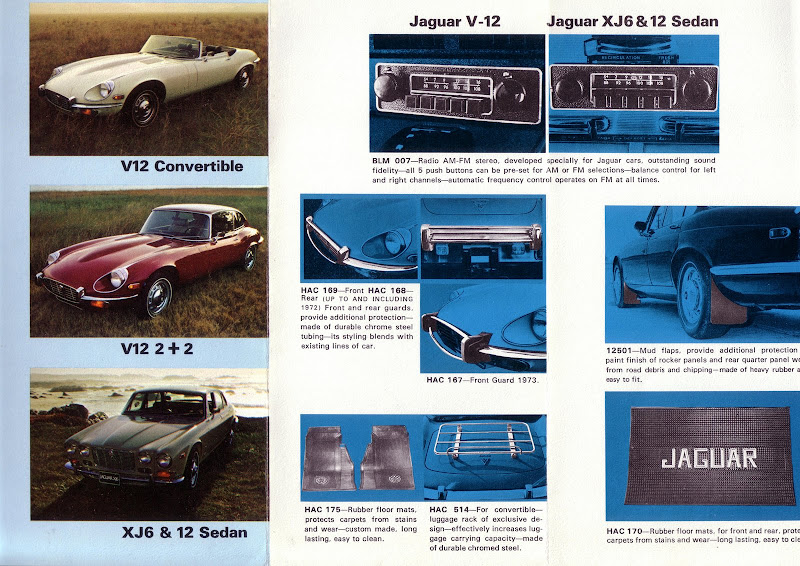 Your speakers look very similar to a pair I removed when upgrading my own car, so quite possibly original. I will see if I still have the old ones, because then I can check if they are actually identical.

Unfortunately, I can't agree that your radio is a period one, I don't think that form of radio with the microswitch buttons and LCD screen was introduced anywhere prior to the 1980s. I believe it was this form of radio which led to the later, larger style of radio now seen - a function of needing more space for the buttons and displays.

Nevertheless, your radio is of a pattern designed to fit the aperture in the console, so no holes have been made for it. Unfortunately, there are few if any true "period" radios which will give anything like what we now consider good quality sound, at least not without modification or addition of extra equipment such as amplifiers and aftermarket speakers. This is illustrated by the brochure you have shown, with a simple push button radio described as "outstanding sound fidelity"!

At least decent speakers can be hidden behind grilles, which will make quite a difference. There are a few modern units disguised as older types, which was my choice and older units can have ipod and mp3 capabilities added, which with an amplifier or similar can sound pretty good. I make no claims to rival Davids' (Heuer) knowledge of audio - until reading his posts, I thought Bose were supposed to be quite good!

I agree the engine note is as good as most sounds I have heard, perhaps that is why Jaguar provided us with the 12 cylinder symphony in the later cars? (six cylinder owners eat your hearts out :D !).

it would be interesting indeed if you could compare your "old" speakers with mine. I agree with your comments on the radio-tape player, I did not mean period/original as early 70's , but more vintage model. And yes the design and LCD is more probably around 80's. Mmmh, I now need to set up a folder with 80's music... which wiil not be a problem at all

Your set up is great and I am sure you can enjoy great sound.
Yep, Bose speakers must deliver quality sound. I read recently some modern cars are fitted with B&O ...

oh, and to close the discussion with 6 cylinders (

oh, and to close the discussion with 6 cylinders ( ), the V12 sound is stereo and dolby at speed , while the 6 cyl. is mono

Phil, if you come out of hiding long enough to read this, you are a

As an factory optional extra you could get a four-speaker system. With speakers on each side of the radio consolle and at the rear. The front speakera were 4" diametre. I have a full set with 2 frt + 2 rear speakers and the stereo unit. This optional extra stereo unit is an 8-track. I also have the original opt.extras catalogue showing the set. It is not for sale, however I can provide you with photos, dimensions or other information if still needed. This stereo set was sold i GB for a 1971 2+2 car.
Show post links
Top
Post Reply Previous topicNext topic
13 posts • Page 1 of 1