i can't see the problem.

Have you a idea for detect the problem ?

Its too rich mixture, you need to adjust mixture if possible
Show post links
Top

I had a similar problem with my series 3.

It was running too rich and the fumes were petrol vapour. However, do not discount problems with leaking exhaust gasses getting into the car.

Have the exhaust and manifolds checked for leaks and check the carbs are set up/tuned correctly.

I am sure others will be along to give other thoughts.

The V12 relies on leak free sealing of the complete induction/ engine breathing system for correct fuelling. Any leaks will lead to rich running and a smelly exhaust.

Carefully check all engine breathing hoses including the large rubber breathing grommet at the front top of the left bank near the oil filler. Also the rubber blanking plug at the front of the right V.

There is no point adjusting carbs until you have ensured you don't have leaks.

Also check the oil leaking on to the exhaust balance pipe which could/will leak into any badly fitted tunnel.

You don't state whether you have a roadster or a coupe, nor when the problem occurs.

It is quite possible that what you are experiencing is exhaust gas fumes entering the cabin during normal driving. The exhaust gases are expelled from the engine at high pressure and there will be much lower air pressure in and around the bodywork of the car. This means that high pressure exhaust gases can be sucked into a low pressure region and if this is anywhere inside the car, then they will carry the symtoms you describe. This is possible even with a roadster.

The two main sources of "air leak" will either come from the engine bay itself, from a myriad of unsealed grommets and air vents (such as for the heater), or from the the rear of the car, where the exhaust and tailpipe's close proximity to the bodywork may allow for gases to be sucked into the boot and then into the main cabin. For example, the radio speakers at the B-posts have a direct path to the boot; the boot has various holes at the back by the bumper to the outside; the exhaust pipe exits very close to the bumper. It is very possible that at certain speeds, a pocket of low pressure air (a vortex) is created and exhaust gases soon find their way to the driver.

Whether the car is running rich or lean or leaking oil is mostly irrelevant, but it'd be more obvious if running rich.

Contrary to Kevin's advice, if the induction system has air leaks and these are after the throttle butterflies, this is likely to lead to leaner rather than richer running and typically would manifest itself mostly at idle, when the "extra" air will make up a higher proportion of the total air pulled into the engine. Air leaks, richness or leanness don't lead to itchy eyes - it is the fumes of one type or another getting into the cabin which are responsible.

You should be able to differentiate the smell of petrol vapour from exhaust gas vapour. The manual does have basic instructions for how to set the carburettors at idle. A hand held lambda sensor attached to a gauge would make a good diagnostic tool.

christophe37 wrote:In my V12, i have itches eyes and small odor...
no visible smoke....

i can't see the problem.

Have you a idea for detect the problem ?

Exhaust smells like exhaust and fuel smells like fuel so you need to give us an idea of the smell. On a Series 1 or 2 it could even be acid fumes from a boiling battery but on you car the battery and heater ducts are on opposite sides. However, the V--2s do have footwell ducts so if something is broken on the tubing or footwell connection, battery acid fumes could enter the car and someone may have messed with the 'adjustable' voltage regulator setting. 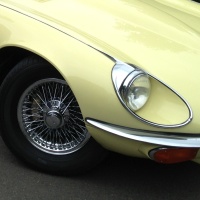 I had the same symptoms on the way back from Le Mans this year - it turned out to be a leaking manifold.

Following on from what Marek said - when driving my OTS with the top down and side windows up, exhaust fumes do get sucked back into the cabin and is quite noticeable at higher speeds.

Having one or both side windows down tends to alleviate the problem.

If we are talking about contaminated air in the cabin the likely cause is a) the fresh air duct seal not making full contact with the heater volute opening or b) missing bulkhead grommets. I had this problem on my FHC which I put down to lack of a grommet on the gearbox tunnel. After sealing that area there were still fumes reaching the cabin and a witness test (talcum powder on the seal) showed there was a gap between the seal and heater box with the bonnet closed thus drawing air in from around the engine.
David Jones
S1 OTS OSB; S1 FHC ODB

Thanks for you're answer ...

I check this points...

Today i make a race with my E-Type to the magny cours pist in France.

How it is possible make correction (i have 4 new su carb) ?