the pre owner of my car has ruined the cooling fan connectors of my S3.
Now I'm looking for replacement parts but I can't find a supplier who sells just the short fan motor cables including connectors or the connector sleeves (rubber) alone (I have asked Autosparks already)

Can't see it clearly, but it looks like the same connector I have on the leads of my "Optimate" battery trickle charger. Think this is a link so you can see the picture:

Looking at the image on the XKS Unlimited site of the motor brush assembly, the connectors are definitely not the same as the original connector.

The original connectors were moulded rubber male/ female Lucas bullet type two way connector. The rubber moulding was a fairly primitive attempt at making the connector water proof given its position in a very wet exposed under bonnet area. XKS unlimited have simply crimped or soldered a bog standard male bullet connector to the wires from the brush assembly because they don’t have the rubber moulding tools.

). These connectors won’t be waterproof and possibly unreliable.

You would save about $20 per motor by buying a pair of two way sealed connectors made by Tyco or Delphi and replacing the original damaged Lucas connectors on the motor and the harness. Much easier than removing the motors as well.

I hope it helps.

Not a bad idea Kevin. Also if anybody does pull out a motor, a major pain, when placing back in car, replace nuts with wing nuts. Speeds up the process as the wing nut will jam, and no fussing getting a box wrench on the nut...just hold wing nut with finger, and tighten. Been working for years
Show post links
Top

John, if you look closely at Kevin's email and my attached picture of the XK product, you will see that the product from XK is not a direct factory correct replacement. Sven will have to modify either the wires in his car or the new part from XK. I have also attached a picture of my original fan motor with the original "water proof" connector. The suggestion from Kevin looks like the perfect factory replacement connector.

As a side note, I have replaced the fan motors in my car with the recommended VAG fan motors, which provide superior cooling to the original ones. Which by the way, both failed. 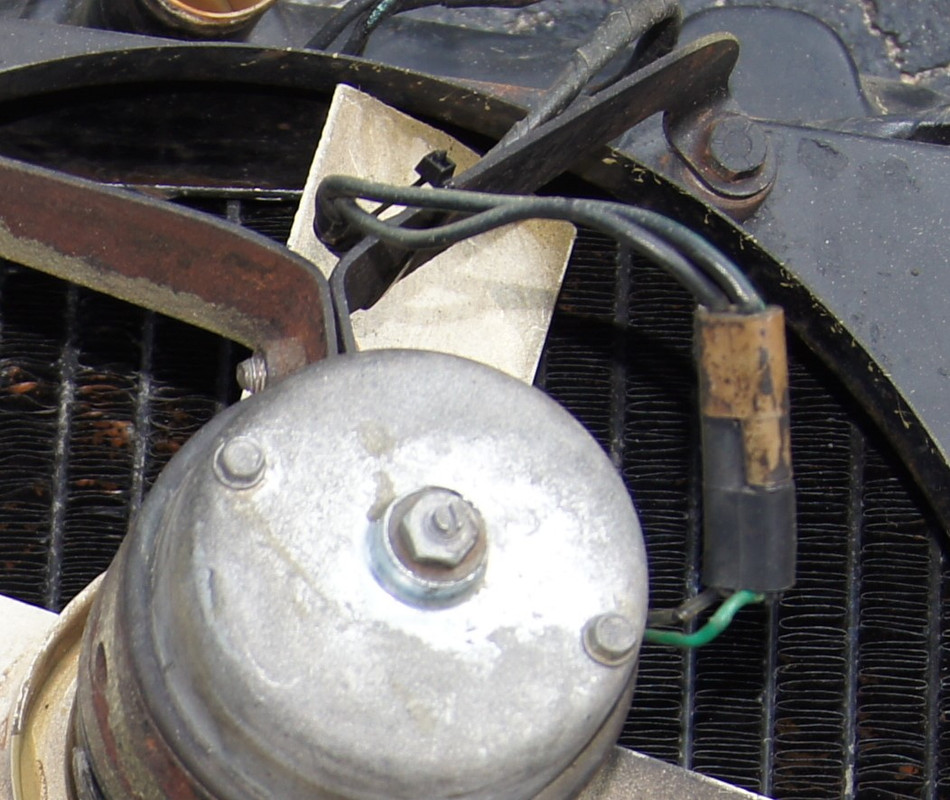 Be interested to hear more about the VAG motors. Also, not that it makes a difference, but for some reason, the picture is the part I use on a fan rebuild, and the wires are as the car was delivered to me new, 44 +years ago. Truth is, as you rebuild your cooling motors, an owner can make any connection that works.

I have them installed in my S3 and they provide the option of running at normal speed or high speed.
The power consumption is not horrendous. I measured the following amperage, per fan motor.:
Low: 5.8A
High: 12.2A

They are a drop in replacement at a very favorable price point.

Again, thank you. Like to try one, and check results.

Kevin is right, the brush kit doesn't include the rubber connector whichI'm looking for.
Too bad Autosparks doesn't sell them, they inlude them in their looms bot don't provide cables for the fan motors.

Of course I can use actual connectors but this looks a little bit "modern" to me.
BUT:

My Radiator is so much leaking and corroded that I firstly will use a new aluminum radiator with modern fans.
Then I'll have to use new connectors anyway and have to forget about using original parts.

Yea Sven....when it come to making your car run as cool as possible, I am a big believer in going new, modern, and easy to install. Heck with the old stuff, in some, not all, cases.