Welcome Julian, good to have you part of the Forum officially now!
My V12 OTS is made up of a large proportion of SNG parts and it's always growing!
One part you could consider manufacturing is the hat shaped unit that goes inside the oil filter canister, that goes against the spring. You can't get them anywhere and I am informed that most cars lose them at some stage during an oil change!
Mike
1973 Series 3 OTS Signal Red
Show post links
Top

I still need one part that - I guess- many may need as well. I do not know wether it was used in other Jags as well, I guess in the MK2, but I‘m not sure. 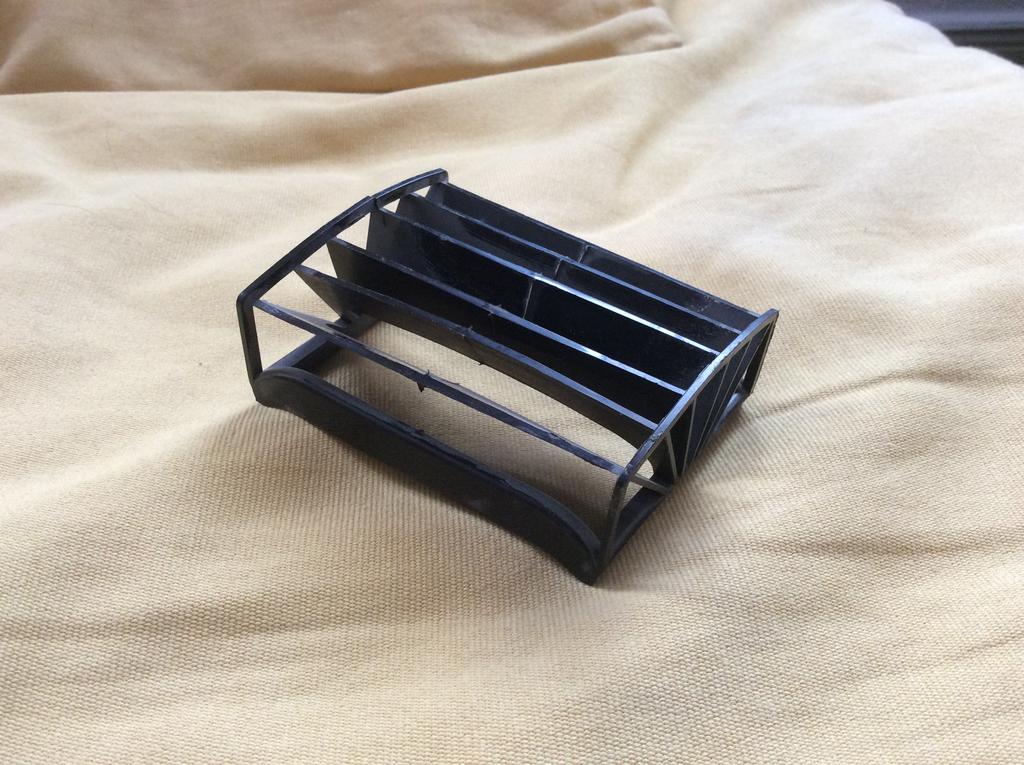 It‘s the air vent grille, at least used in the 2+2 (in mine for sure

Please consider making a batch, it should be possible on a 3d printer nowadays with some effort. There was an initiative in this forum to make some, but I never got a response where or when I could buy one.

Hello Julian,
Welcome and thank you for dedicating yourself to supporting our hobby.
On this side of the pond, SNG is always my first choice and has been so since you acquired British Auto/USA
after the founder passed. They were always very good and you've made the franchise that much better.
Your sales staff is very knowledgable and of course very helpful.

I've probably not suffered to the same extent as many as my car was complete and had virtually no pattern parts on it, having been initially restored in the late eighties by a guy who (from the invoices I've got) trawled high and low to find original stuff - at a time when there were probably no pattern parts being made anyway.

So my thousand hours has been provoked by incompetent and sloppy assembly of the largely correct parts, and/or trying to do better than Jaguar, whilst appreciating that they didn't have the luxury of time.

The cleft-stick for people like SNGB is that their prices will often be compared with those announced by others who, however, are not selling the same parts.

I have to say that in all my dealings with him, in person, both as an unhappy customer and as a putative supplier, he has been refreshingly straight and unambivalous.

If you can't face the whole slab, at least get a foretaste :

Sorry, this is a long post ; but I think it's a topic that sums up the feelings of many of us on the Forum, and I hope that the detailed nature of my observations will deflect any comments regarding scatter-gun complaining.

It's taken me a while to draw up, adding a paragraph here and there in a Word document over the last few months, but seeing the accumulation of pictures and notes I've made over the last 5 years has made me quite angry - and, hopefully, eloquent.

I'll try and get out a little more when I've finished.

Have I just been unlucky, or are many people in The Mini Business either Crassly Incompetent and / or Dishonest ?

Does it come with the model ?

I'm beginning to suspect that the answer is Yes.

I've not given names to the suppliers of the stuff or the services I'm listing here, because - just occasionally - I got some redress, and because I know (from my time in the trade) that many retailers are selling parts that actually all come from the same manufacturer.

Many times I was unable to complain because, camping behind the 12-months guarantee, retailers tell you to take a flying jump if you order stuff at the beginning of a restoration and then consume it slowly over the next 2 or 3 years.

I had a good example of this when a LHD steering rack bought from a "family-run, enthusiast specialist etc cont. p92" business turned out to be actually a RHD one when I went to fit it 2 years down the line ............ I asked politely whether I could return it, never fitted, brand new in its brand-new box, at my expense, and was made to feel like I was a leper and asking for the moon ; remember, this was to return a RHD one that they must sell every week, and ask for the correct LHD one.

I maintain that the overall picture is one where one could justifiably begin to think that The Mini Business is rotten to the core, shows every sign of being devoid of any staff with any genuine engineering and/or materials-science training (and by this I mean intellectual rather than just learned-at-the-bench) and - to pinch a recent comment by another contributor - seen by many retailers as akin to shooting fish in a barrel.

Let's warm up with a minor but irritating one that speaks volumes for the market context ; my circa 2012 2-core radiator had the ears on the filler cap that lined up with the rad and looked right. Four years later I buy another one, same source, to find that the orientation has changed and the cap now sits at 90° - can any one tell me why ? One is wrong, it makes no difference in practice, but is there no specification for this sort of part ?! Do they just make it up as they go along ?

And so it goes on. There are some great examples of dishonesty as well as incompetency, and I put loads of pictures up to keep the narrative flowing - you'll enjoy it, I promise.

Compared with the situation with Mini parts, believe me, this kind of account

Many thanks for these welcomes.
In response to a couple of specifics - i will pass the vent idea on to our development team and see what we can do. It is this item 6 & 7 in the below diagram:
https://www.sngbarratt.com/uk/#!/Englis ... 20CONTROLS
I am not sure that 3D printing will give a satisfactory finish for these but i will update elsewhere on the forum in due course.
Additionally, here are a couple of pictures of the Series 1 E-type from a sunny and rainy few days in Wales last week! I will load up some images of the V12 when i am next in the car.. 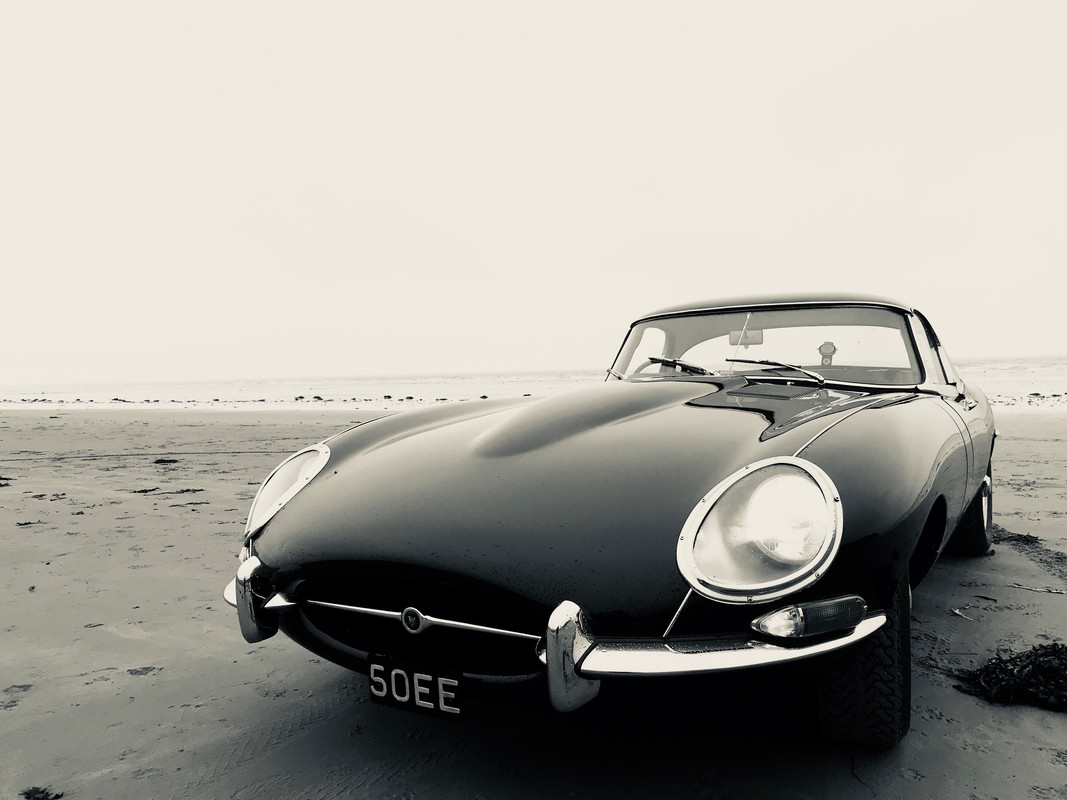 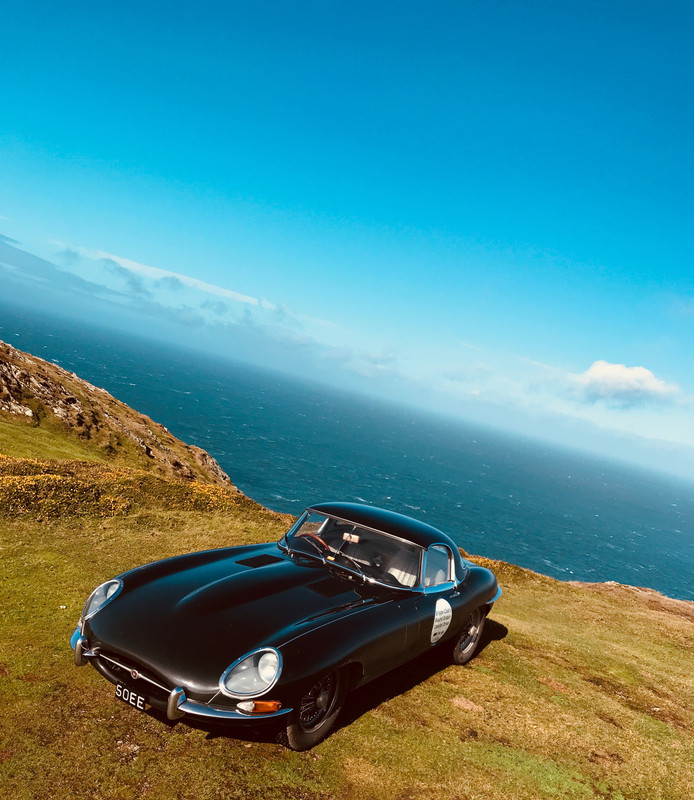 MD at SNG Barratt Group
Enthusiastic owner/driver of a couple of complete E-types as well as a warehouse or two of parts...
Show post links
Top

Yes, it is part 6 and 7, from what I know they are not handed, any will fit both sides.

I‘ve been looking for them for a long time, to no avail, so I would be happy if I could find at least one.

A real beauty Julian, also seen it in the builtbymany episode.
Must be a delight to drive.
Ralph
'69 OTS + '62 OTS - Belgium
Show post links
Top

Unfortunately, it does not replicate the original, colour, size of Growler. Is there a reason for this, for example copyright? In that JLR will not let you make exact copies? Or you decided against in case you were infringing copyright?
It'd be nice to get good replacements (not the gold plated ones JLR are now producing!) Any thoughts of what you might be able to do?

Hi Julian and welcome. I'm just back from the Spanish Paradore trip which SNG made the rally plates for. One of our cars had a failed clutch fluid bottle; we made a temporary fix, and you got a new one sent to the next parador on our route for him to collect and fix. Well done.
Malcolm
I only fit in a 2+2, so got one!
1969 Series 2 2+2
2009 Jaguar XF-S
Show post links
Top

Hi Julian and a welcome from me too.

Largely delighted with the supplies I get from your organisation and the telephone support is always 100%.

Sorry to miss you on RBCD - I am just back home in Edinburgh having done stages 5 though 9 but one final dinner with them tonight.

Delighted to have your support on the forum.

Having passed the 3 score years and ten milestone quite a while ago, I am on the bonus round, so time has far more value than the money at this stage. I've restored and lived with a number of cars and airplanes back in the day, but not this time for the E type bucket list item.

My heartfelt thanks goes to the SNG (US) without which I could not have done my bucket list restoration, bolt level end to end in 7 months and then put several thousand miles on the machine along the west coast, in the mountains, as reliable as a new car under warranty would be - zero problems. There were other UK firms that I relied on to get it all done in the tight schedule, but SNC was near the top of the list, and William W of your firm was instrumental in helping to make it happen.. 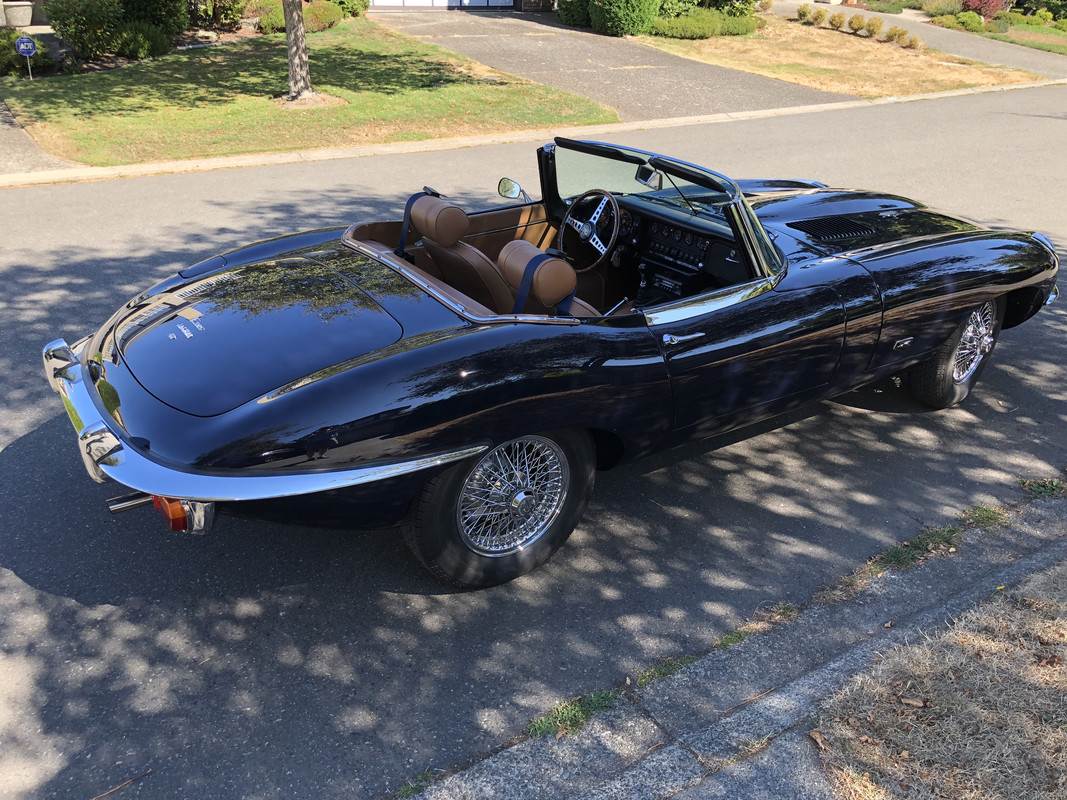 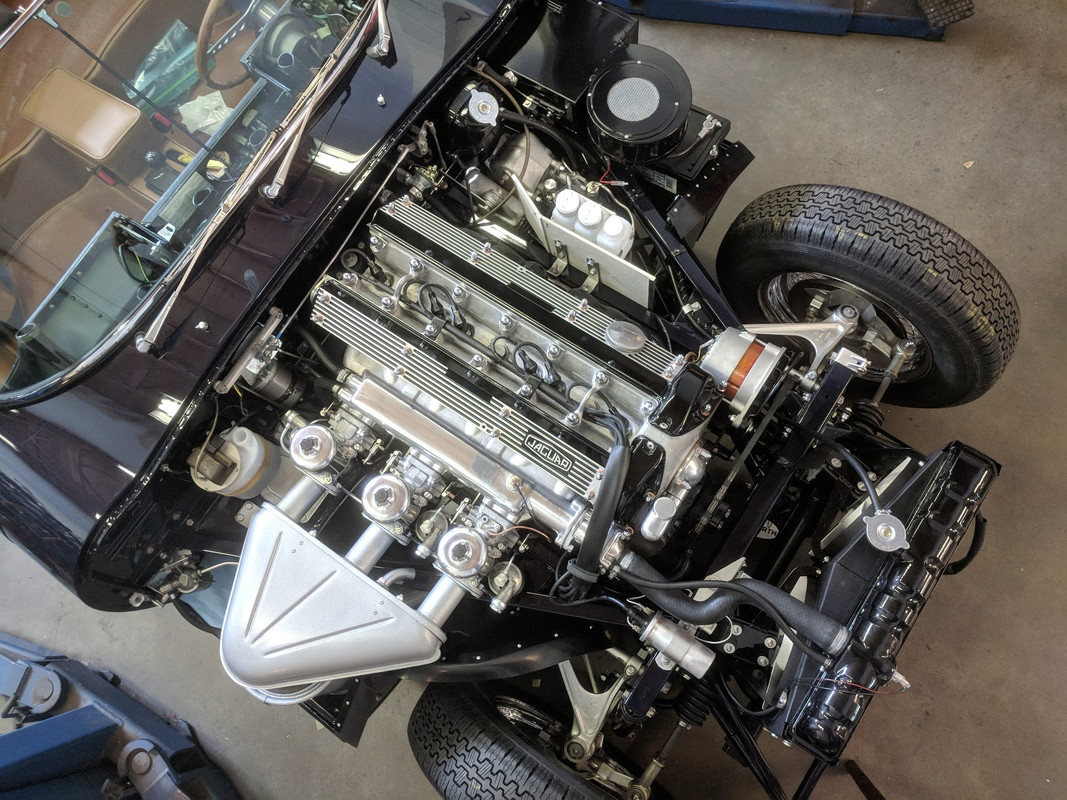 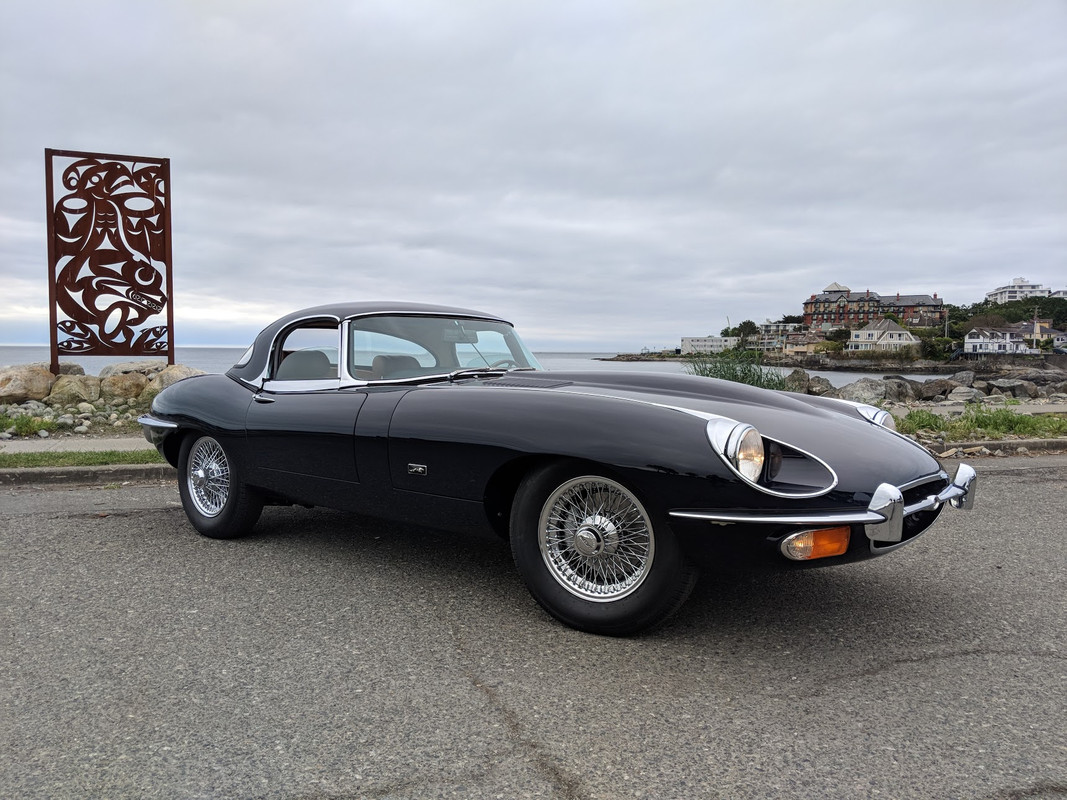