I'm rebuilding my 1967 late Series 1 2+2. The pedal box and rear brakes are all Series 2 and it was fitted with the longer hydrostatic slave cylinder. All seem to be original - maybe part of the changeover to Series 1.5/2 cars?? The clutch master cylinder attached to the pedal box is a cast iron Girling model (which I'm pretty certain is a replacement) and has only one seal at the rear of the piston. Having refurbed the cylinder I wasn't 100% confident with the bore so I purchased a replacement, non oem cylinder. On swapping out the pushrod on the new cylinder, the piston assembly came out. It had a groove on the piston, but there was no rubber seal in it. The body feels like it could be aluminium.

My question is, should the replacement cylinder have a seal fitted to the piston, as well as the rear seal? In the photo below, Ive fitted one that was in the refurb kit I bought for the old cylinder.The sectional view of the cylinder in my manual shows a piston sealing ring and rear seal, but the cylinder is a different type with a port at the rear. Is this what was fitted to 3.8 cars? 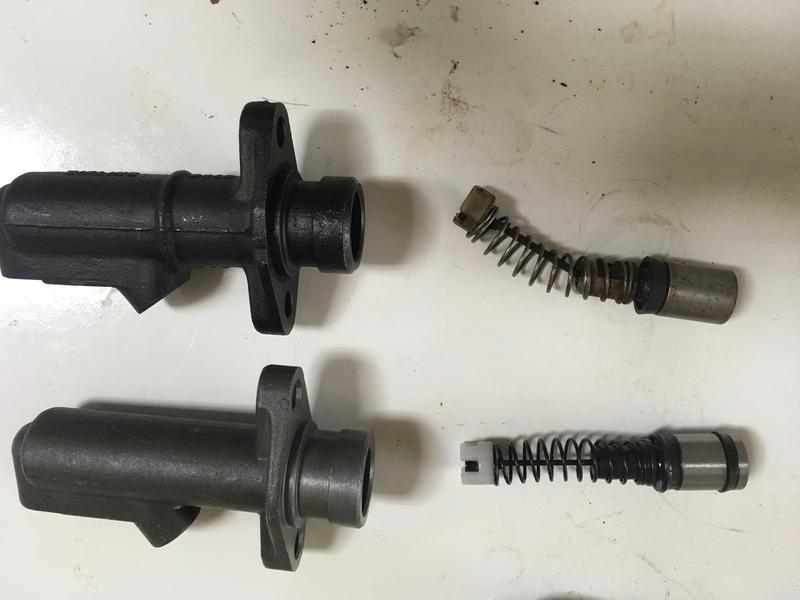 Simple answer....yes....the second seal should be there....it is not a pressure seal but should stop any fluid that passes the main seal leaking out....
Julian the E-type man
1962 FHC
1966 MGB....fab little car too
Show post links
Top