Hi all. I'm starting to think about selling a car that has literally sat in our garage for 27 years without moving (or any maintenance). Series II 2+2 1968, all original documents from original sale to full service history. Manufactured and immediate export to USA, we imported it 1991 but still not registered UK. RHD. Original condition, cream with black leather. Automatic. 36k miles. Not a convertible. Prob needs element of restoration as some cracks in original paint etc. I have no idea how to get a vague valuation as searching on line prices seem to vary widely and I don't know what drives the price. Any advice. I'm not a classic car buff...my dad was and this was his car, but he sadly passed away in '93 so this car hasn't moved since. thanks.
Show post links
Top

Worth posting a few photos. Exterior, interior, engine, underside.....this will give us something to go on...do you have all the import, ownership papers,....here is a valuation tool/guide http://apps.hagerty.com/ukvaluation/ind ... Backlink=1
Steve
1969 S2 2+2 & Building a C type replica
Show post links
Top

Hi Mich, most owners here are too polite to give you the low down. Steve has some good advice but there are some things that may hurt your sale. I'm not trying to be negative or to put your car down, but here you go:

#1, Series 2 cars aren't as desired as the Series 1 cars and bring less money. Yours being an 1968, may be an early enough production run that it still has the series one features (body style, lights, etc.) Series 2 was mostly an 1969 model.
#2, 2+2 cars aren't as desired as FHC (fixed head coupe) and OTS (open two seater) and bring way less money.
#3, Any car that has sat as long as you describe needs everything redone and can cost way more than the car is worth when all is done.

That being said, it is still an E Type and some one out there would be glad to have it. You might look for an local car club and see if they will help you find it a new home. Best of luck.
Show post links
Top

#1, Series 2 cars aren't as desired as the Series 1 cars and bring less money. Yours being an 1968, may be an early enough production run that it still has the series one features (body style, lights, etc.) Series 2 was mostly an 1969 model.

Series 2 was a complete design change produced from October 1968. All series 2 are basically the same apart from minor early changes....seat material and armrests etc
[/quote]


Less widely known, right at the end of Series 1 production, but prior to the transitional "Series 1½" referred to below, a small number of Series 1 cars were produced, with open headlights. These Series 1 cars had their headlights modified by removing the covers and altering the scoops they sit in, but these Series 1 headlights differ in several respects from those later used in the Series 1½ (or 1.5), the main being they are shorter at 143 mm from the Series 1½ at 160 mm.[43][44] Production dates on these machines vary but in right hand drive form production has been verified as late as July 1968.[45] They are not "rare" in the sense of the build of the twelve lightweights, but they are certainly uncommon; they were not produced until January 1967 and given the foregoing information that they were produced as late as July 1968, it appears that there must have been an overlap with the Series 1.5 production, which began in August 1967 as model year 1968 models.[46] These calendar year/model year Series 1 E-Type 's are identical to other 4.2-litre Series 1 examples in every respect except for the open headlights; all other component areas, including the exterior, the interior, and the engine compartment are the same, with the same three SU carburetors, polished aluminium cam covers, center dash toggle switches, etc.[47]

Following the Series 1 there was a transitional series of cars built in 1967–68 as model year 1968 cars, unofficially called "Series 1½." Due to American pressure the new features were not just open headlights, but also different switches (black plastic rocker switches as opposed to the Series 1 toggle switches), de-tuning (using two Zenith-Stromberg carburetters instead of the original three SUs) for US models, ribbed cam covers painted black except for the top brushed aluminium ribbing, bonnet frames on the OTS that have two bows, and other changes.[47] Series 1½ cars also have twin cooling fans and adjustable seat backs. The biggest change between 1961-1967 Series 1 E-Types and the 1968 Series 1.5 was the reduction in the number of carburetors from 3 to just 2, resulting in a loss in horsepower from 265 to 246 and a loss in torque from 283 to 263.[20]

Series 2 features were gradually introduced into the Series 1, creating the unofficial Series 1½ cars, but always with the Series 1 body style. A United States federal safety law affecting 1968 model year cars sold in the US was the reason for the lack of headlight covers and change in dash switch design in the "Series 1.5" of 1968. An often overlooked change, one that is often "modified back" to the older style, is the wheel knock-off "nut." US safety law for 1968 models also forbid the winged-spinner knockoff, and any 1968 model year sold in the US (or earlier German delivery cars) should have a hexagonal knockoff nut, to be hammered on and off with the assistance of a special "socket" included with the car from the factory. This hexagonal nut carried on into the later Series 2 and 3. The engine configuration of the US Series 1.5s was the same as is found in the Series 2.
Show post links
Top 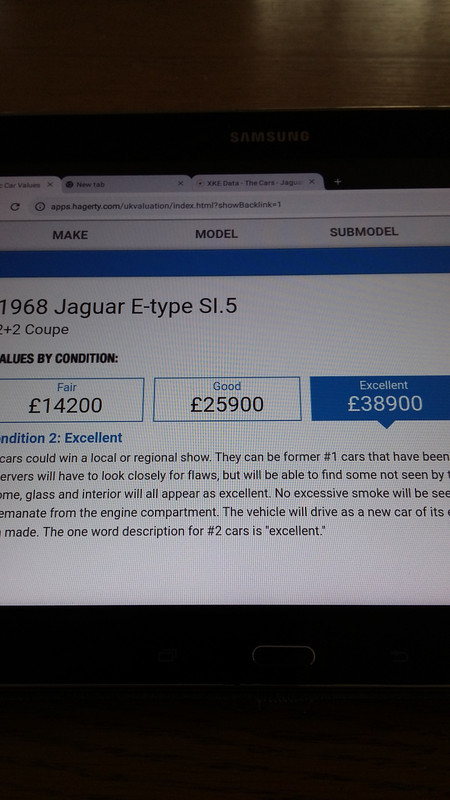 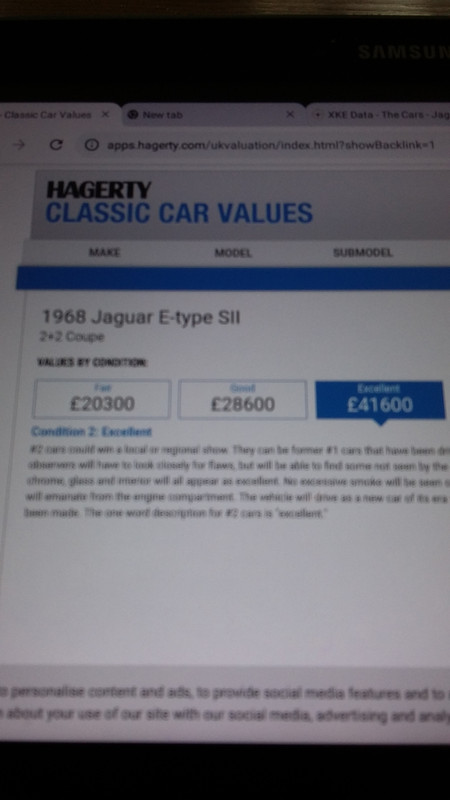 Hi Malcolm...Im just the messanger passing on the onfo from the Hagerty site.....they base these figures on sales, and auctions as far as im aware so it depends on whats sold...Steve
Steve
1969 S2 2+2 & Building a C type replica
Show post links
Top

"...and any 1968 model year sold in the US (or earlier German delivery cars) should have a hexagonal knockoff nut, to be hammered on and off with the assistance of a special "socket" included with the car from the factory. This hexagonal nut carried on into the later Series 2 and 3."

The spinners are not hexagonal and the German ones were different to the Federal spinners. The German/Swiss ones were a normal two-eared spinner with the ears cut right down and used a tool to fit.

The Federal spinners were a different irregular shape, probably best described as a rounded triangle. with its own tool that worked in similar fashion but is not interchangeable. Gotta love the German sense of priority:

"Ze two-eared schpinner may hurt a pedeztrian's legs or maybe a cyclist in city traffic. Zis is an avoidable danger und so we vill legislate

I fear they watched one too many Bond movies.

Please note that my quote was from Wikipedia. 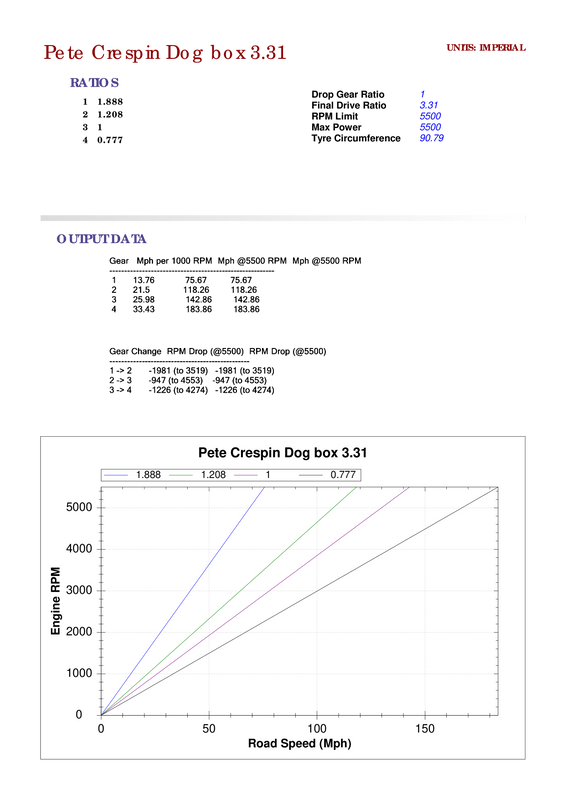 ....maybe a good plan would have been to migrate into the land of ze autobahn, and not into nutbush city limits.... at 66 miles an hour.

Would love to see the D on the autobahn...or in ze mountains. Maybe one day we‘ll be back, and go into the blue ridge mountains again...