Has anybody fitted a new pair of doors to their car? Mine needs both doors as the originals were as rotten as a pear. So I got another pair of doors, took the skins off, sandblasted and repaired the frames and re-skinned one of them over the week end. When I fitted it to the car I couldn't open it at all as it was so tight and ended up taking about 5mm of the leading front edge of the door and about 3mm off the bottom of it and I'm not done yet. It still needs a bit more off the front and probably another couple of mm off the bottom.

Just wondered if I'm alone in this?

I rebuilt my doors and they required quite a bit of 'adjustment', refolding edges etc.

From memory not as much as you have had to do though.

I assume you have replaced the sills and possibly the panels between the wing and the doors?

Also as with me, repairing the door frames can possibly add on a couple of mill here and there, regardless of how accurate you try to be.

This could all add up to make the difference.

Also, when I checked my new door skins against the originals, there were definitely differences.

CMC quote in their restoration manual that "the correct distance between the A and B post face at the inner sill top edge is 32 1/2 inches"; possibly worth comparing to see if yours is narrower.

Thanks for the reply Paul.

I do have that CMC book but missed that dimension. Hopefully it was a typo though as both mine are just under 30 1/2" each side

I think part of my problem was that I had to get the frame far forward enough so that the back of the frame didn't foul on the striker plate on the body. The clearance there is so small it's a bit of a nightmare. So the gap at the back of the door is a bit larger than I would have liked but I think that CMC book suggests a gap of 3/16" all around the door although I've heard others say 1/8" all around except at the front which is a large 3/16". Somebody else told me the width of a pound coin but I haven't measured that yet.

but I braced it all before I cut the old ones out and the new floors all lined up to where they should have been.

I had the same problem with my door frames; it was very difficult to get adequate clearance between the door and the B post.

I measured the gap on mine between the A and B post, but it is trimmed on the inside and difficult to get an accurate measurement, although I was somewhere near 32 1/4 -1/2 inches.

Thanks for the info. I'll aim for a 1/8" gap along the bottom and at the B post. But at the front it will have to be 3/16" possibly a bit more as the front edge of the door is virtually touching the panel in front of the door when you open it... 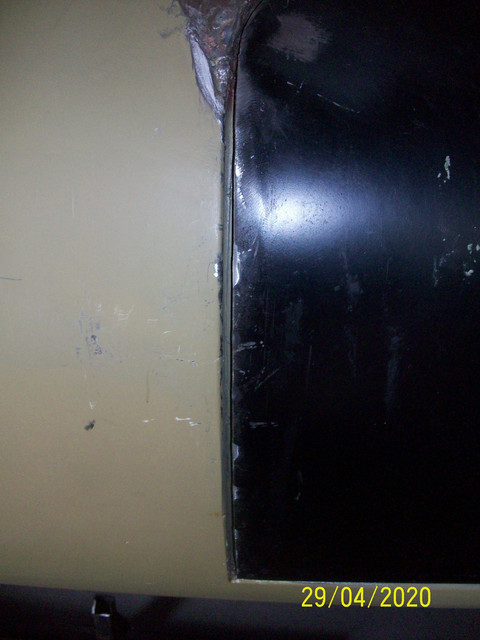 Dont forget that that 1/8" is after painting, so it would need to be at least 3/16"in bare metal.