I hunted for 20 minutes through "Wiper" topics using the search, honestly, but almost everything seems electrical or motor-based, and not much mechanical.

Could anyone shed any light on this please ?

I have the guts of the windscreen-wipers in bits, motor works fine, so does all the mechanism as I overhauled most of it a few years ago, BUT I'd never had the primary linkage off, the first rod that is driven by the motor crank, until now. 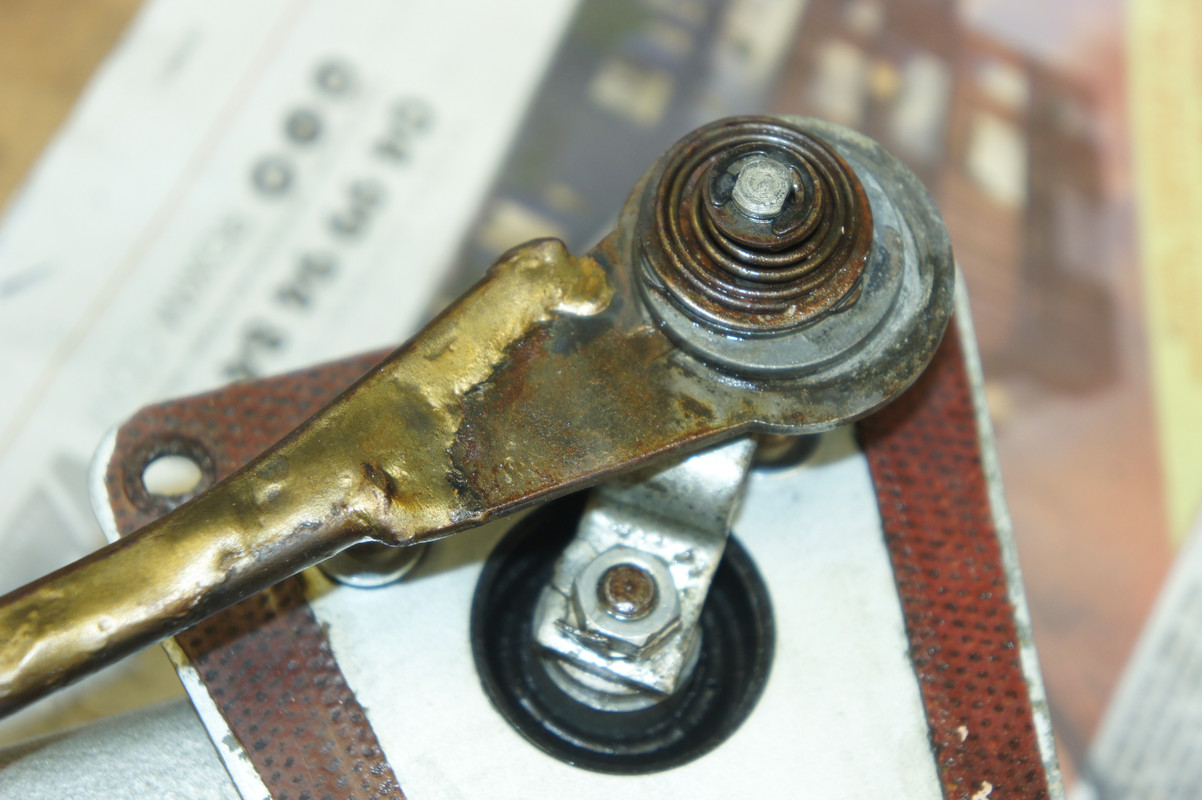 Could anyone tell me quite what has been botched here, and suggest why ? 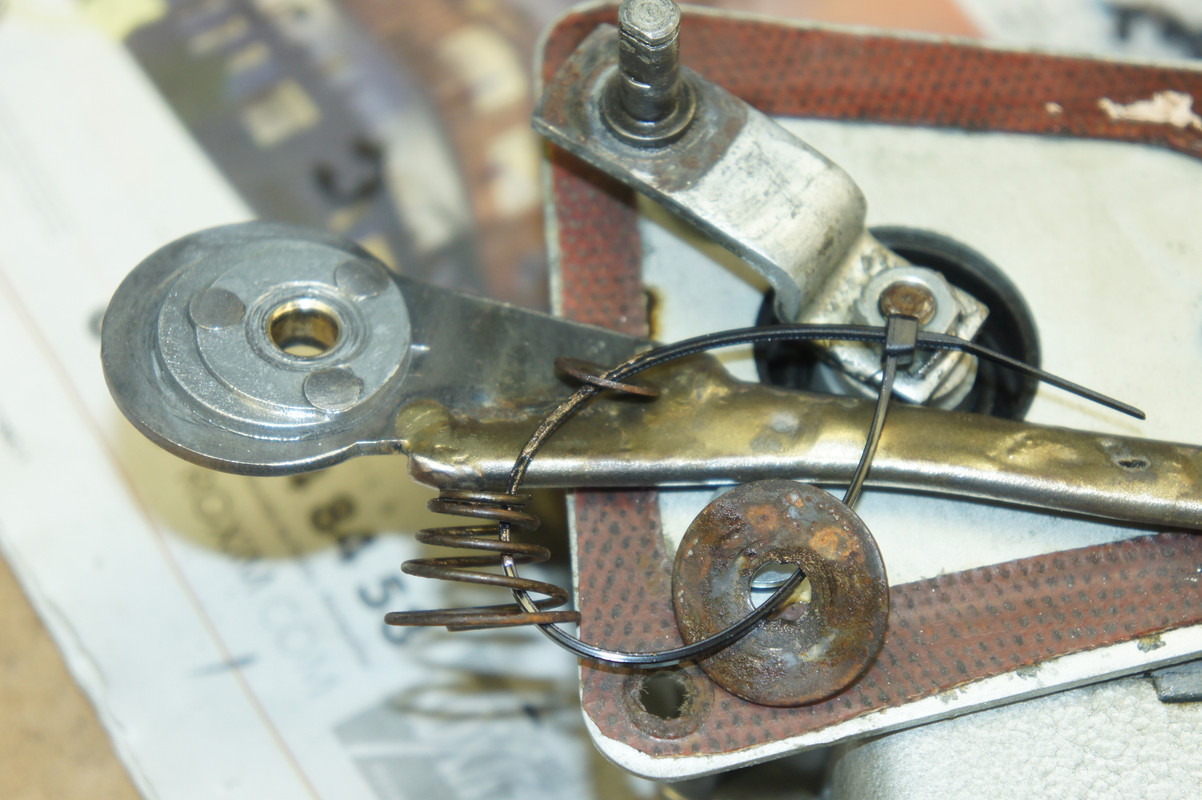 Is there an easy way (replacement part from another car ? available new ?) to get rid of the slop and wear that's present both in the centre bronze bush (which would be a bit of bitch to make/replace as the core is hard to get hold of) and in the interface between the eccentric core and the operating arm ? 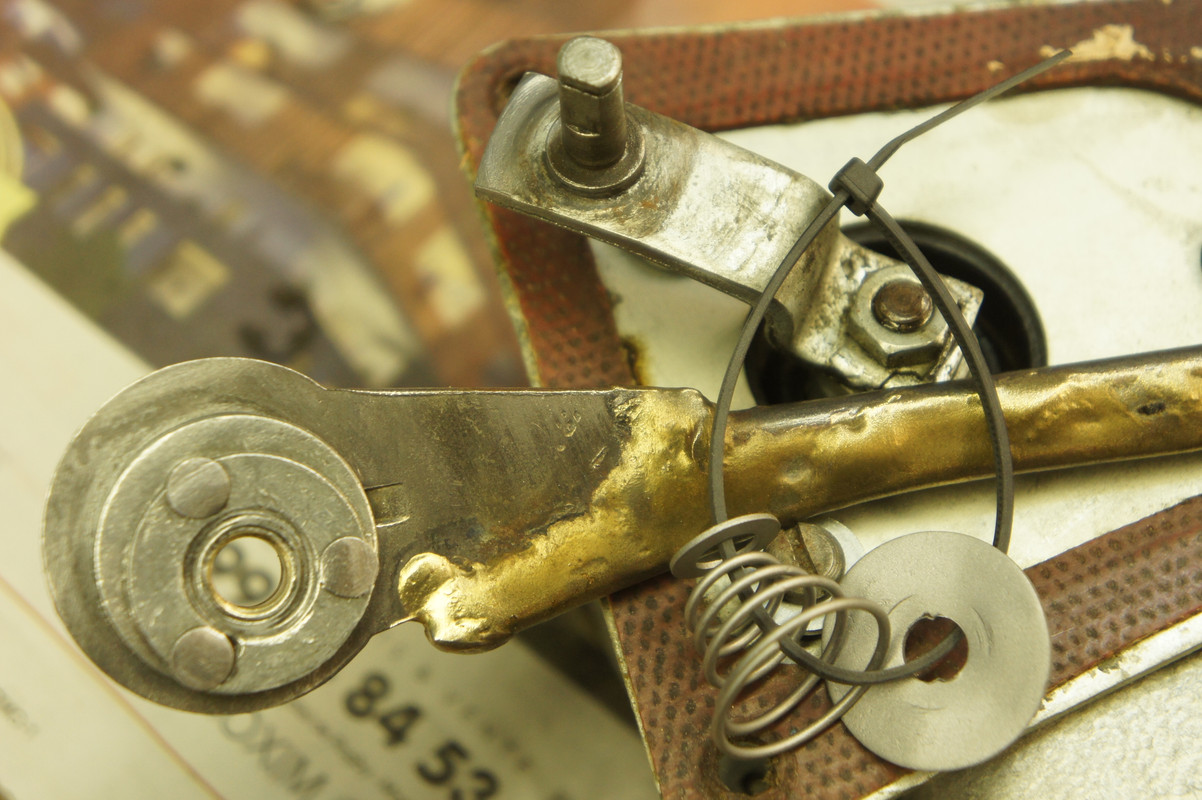 Are these even E-Type parts ?!

It would make everything a lot quieter if I could improve this.

#3 Re: Wiper Drive Pimary Link, what does the "eccentric" do ?

I'm inclined to think these are original parts, and that the brazed reinforcement is just a repair rather than an adaptation ? 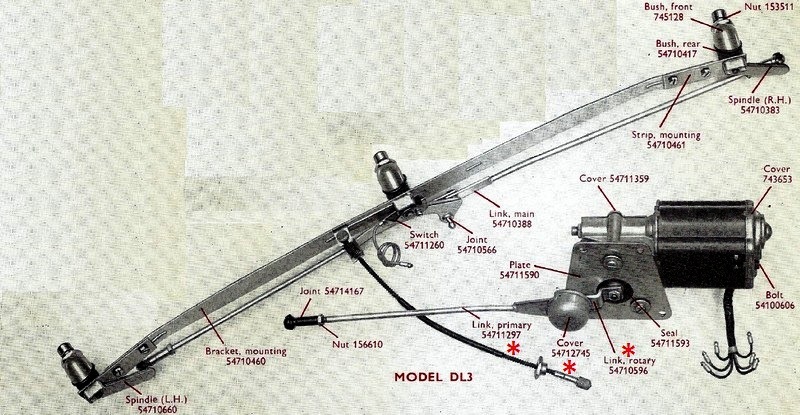 from the Factory Fit string suggests plausibly similar parts, complete with a cover 54712745 that would have protected the "eccentric" and its spring, and that I don't have ? 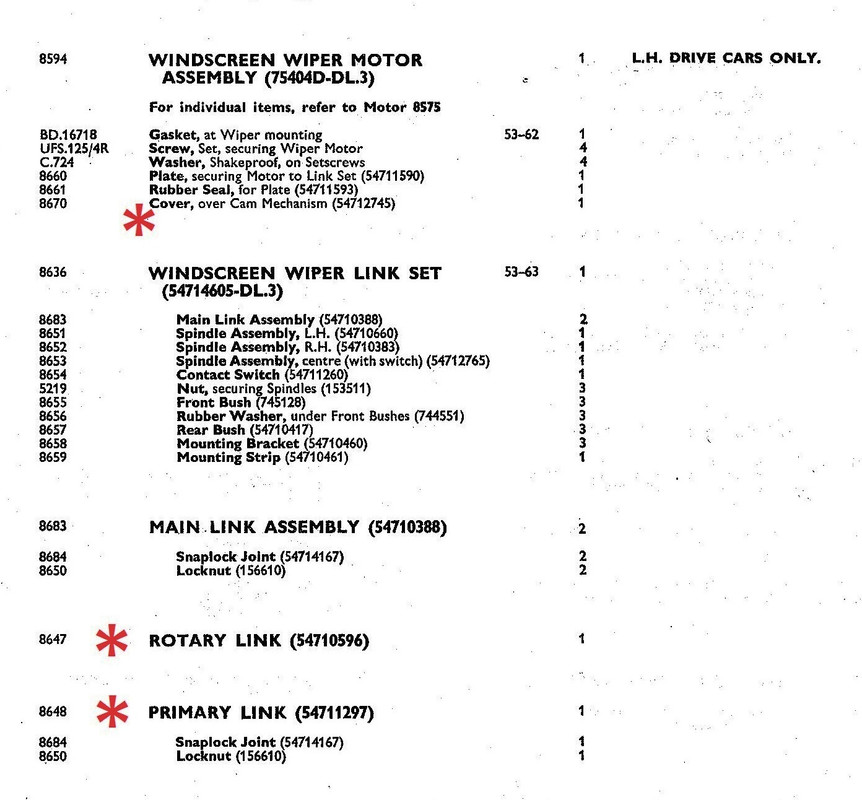 Has anyone ever overhauled / repaired /rebushed one of those Link.Primary, and do we know how many cars used this arrangement before it was replaced by something else ? I can't find any pictures of this mechanism, with the exception of Angus' shot when helping with a recent clip identification.

Furthermore, can anyone work out what this complexity was for, even ?! 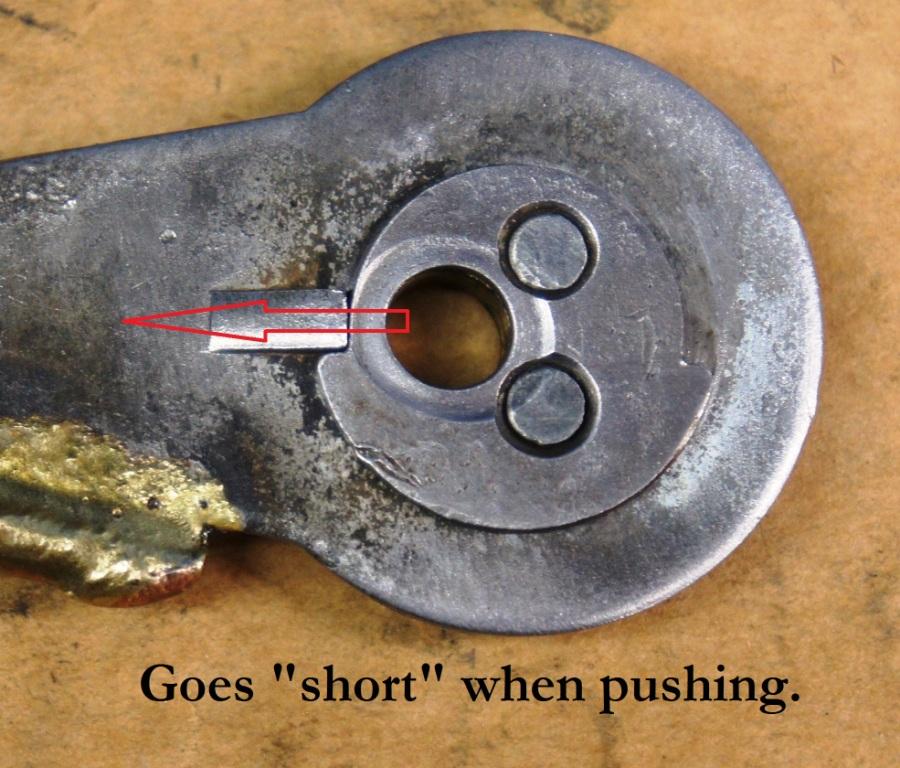 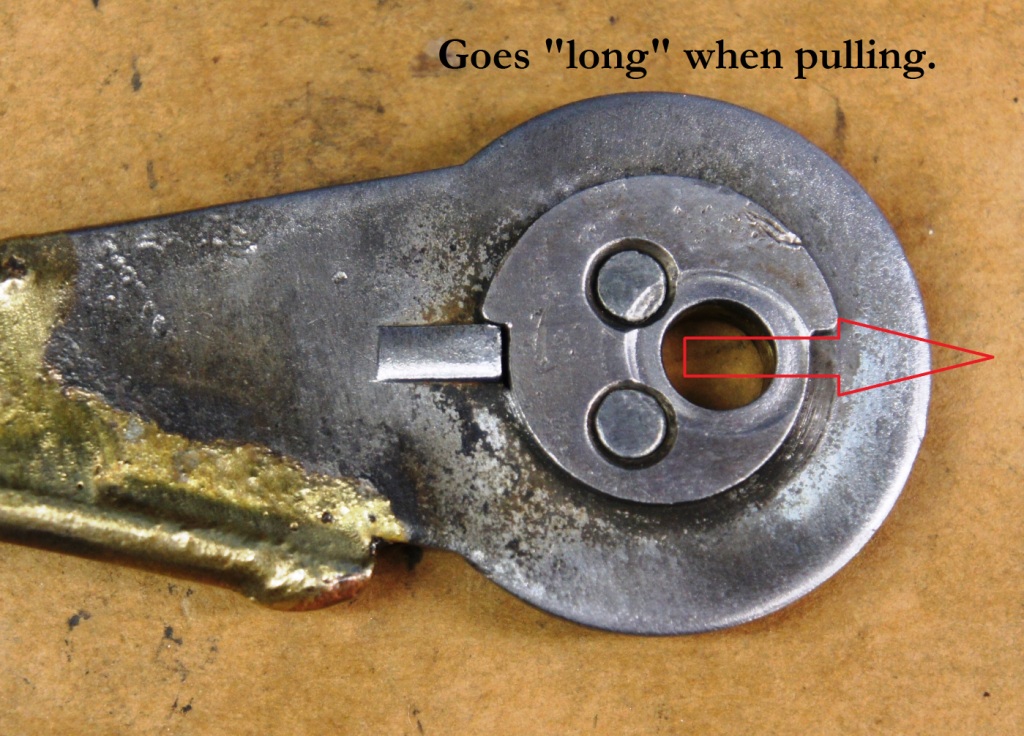 I've not mocked this up to examine closely what the consequences are, but it's fiendishly clever and is giving me headaches.

Something tells me it's to give the wipers a certain "pause" at TDC and BDC, as each time the eccentric rotates there will be a brief asynchronicity between the motor rotation and the wiper motion, maybe so they were easier to park ?

Edit : I'm wrong in this interpretation ; the fact that there is the conical spring maintaining a certain load on the eccentric, in fact it always adopts the same position when the motor is driving in one direction, and then adopts the other position only when the motor reverses to stop.
Last edited by rfs1957 on Sun Dec 01, 2019 1:12 pm, edited 1 time in total.
Rory
3.8 OTS Cream 877393 Built May 28th 1962
1978 Mini Van
(plus bevel and belt single-cylinder Ducatis)
Show post links
Top

#4 Re: Wiper Drive Pimary Link, what does the "eccentric" do ?

Now I've changed the wording of my title, the clever Forum suggestor-mechanism has thrown up some similar posts, which I think I am about to find contain the answer to my questions ..............

viewtopic.php?f=4&t=6509 - Kingzetts never got any follow up to this, however.

#5 Re: Wiper Drive Pimary Link, what does the "eccentric" do ?

#6 Re: Wiper Drive Pimary Link, what does the "eccentric" do ?

Rory _ I am not certain, but I think the eccentric is something to do with the parking mechanism, when the motor runs backwards - during the change from forard to astern the wipers do that extraordinary dance
Show post links
Top

#7 Re: Wiper Drive Pimary Link, what does the "eccentric" do ?

#8 Re: Wiper Drive Pimary Link, what does the "eccentric" do ?

Rory - I scratched my head over the reason for that mechanism when converting to RHD.
As no one at the time could explain it, when I finally understood I did a post which I just found linked in the knowledge base with some photos http://www.xkedata.com/resources/read/?id=9 where I wrote:

If interested in WHY this works though, read on:

If you take the control rod /arm off the wiper motor you will find that it actually has an eccentric cam (i.e. the hole for the spindle is offset from the centre of the cam) built-in, with ‘stops’ that give it 2 possible positions.

The reason becomes clear when you realise that switching the wipers to OFF actually puts the motor into REVERSE. It is not until the limit switch gets to the end of its travel that the motor stops.

So this is the way it all works:

Wiper Blades are normally parked tight against the windscreen rubber surround so as to be out of the way.
Switch the wiper ON (slow or fast) and the motor turns one way, forcing the cam into a position which leaves the control rod at its ‘short’ length.
When the blades complete a sweep and come back down to the bottom of the screen this ‘short’ length means they stop well before the surround (to avoid hitting it) and continue the next sweep. The ‘finger’ of the limit switch never leaves the brass surface.
Now move the wiper switch to OFF and the blades will actually reverse their direction of sweep, back up to the vertical position. The cam is now thrown to its other stop, effectively lengthening the rod.
The extra length means that when the blades sweep towards the bottom of the screen this time they keep going until they touch the rubber surround. At this point the ‘finger’ runs off the edge of the brass plate and the motor stops.

#9 Re: Wiper Drive Pimary Link, what does the "eccentric" do ?

Hi Joe, Yes I had discovered your illuminating explanation and posted it in #4 of this string, but the more links there are to it the better !

It's indeed a very clever bit of chicanery, whoever thought that up must have been an insomniac.

I seem to have spread this debate over two topics

so if you want to clean up the mess, David, feel free to amalgamate.

From the parts list drawings, I'm tempted to speculate that this same eccentric idea may have been used on the cable-rack type of wipers too, as there appears to be a similar 3-rivet assembly visible here too ?

OK ; despite David's sound advice to ditch my original motor and find a Series 1.5 with the parking-switch built into it, as my motor was brand new circa 1988 and I like a challenge, here's where I'm up to.

The replacement Primary Link I bought had even more slop in it than the 58 year-old original, and wasn't bushed either, just steel-on-steel, so I returned it and have re-bushed the original, see below. I may yet get surprises regarding the worn-out triple-blips on the swash-plate but ........... 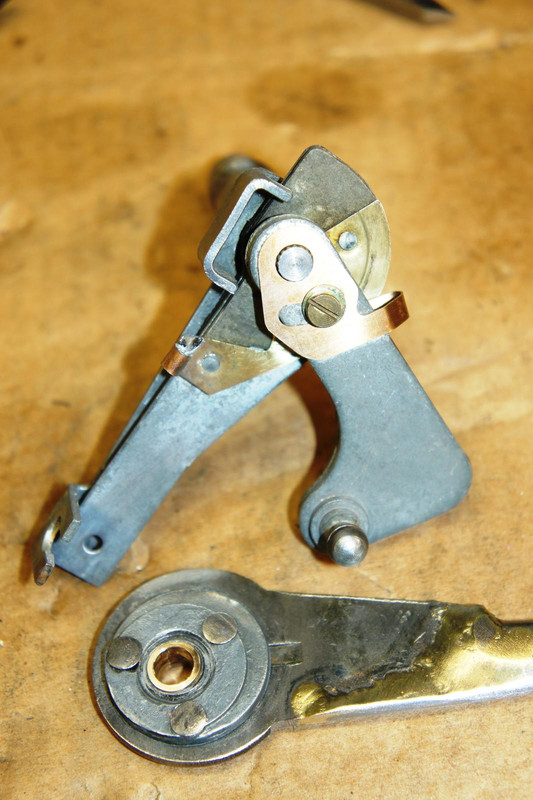 However, I was able to get a correct S1 centre-wiper assembly from the same source, rather than the S2 the car had fitted, together with a new beryllium-copper wiper finger seen here above, and as Angus kept on his desk my unused adjuster cable (that I paid a bar-bill with) and has untertaken to send it back,I should soon have all the necessary parts.

My next quandry is whether I have the correct outer wiper pivots - as the two I have have different lengths, which may well be some deliberate part of the sweep amplitudes but which is L and R escapes me, especially as it was me that stamped L and R on them. 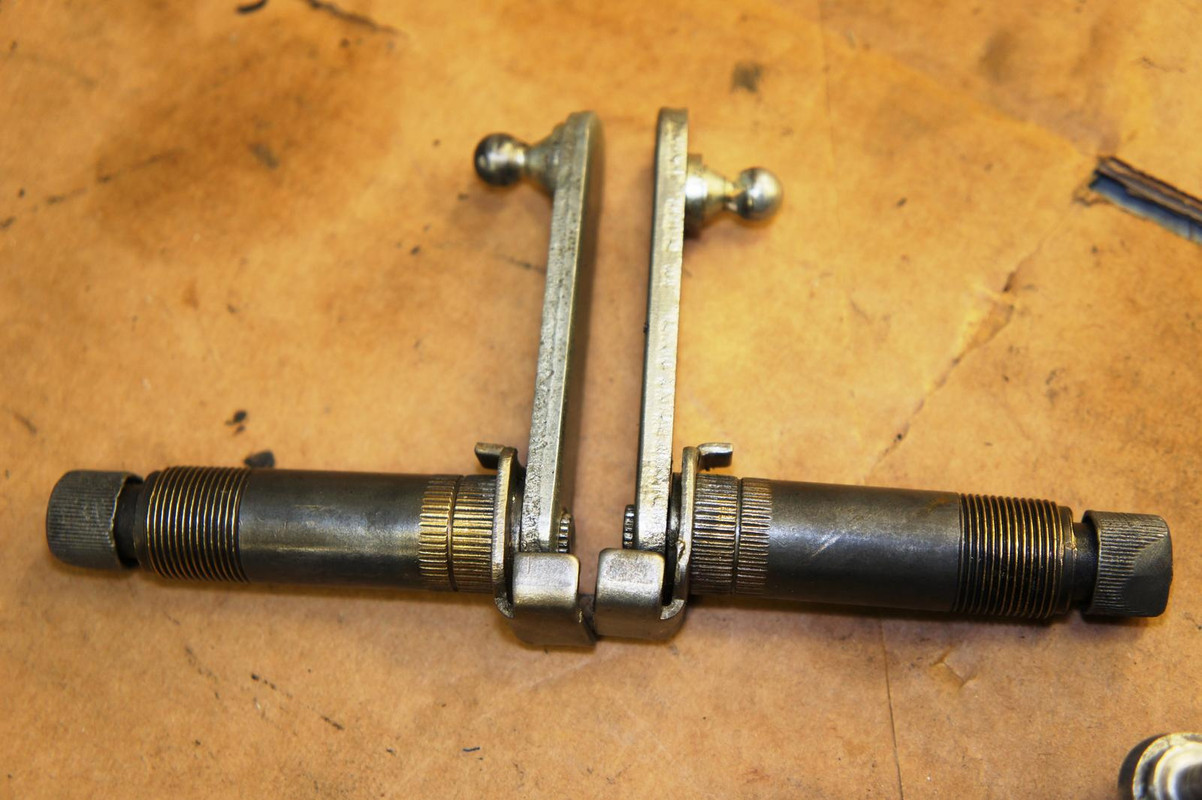 Can anyone confirm that this is normal, and suggest which goes where ? 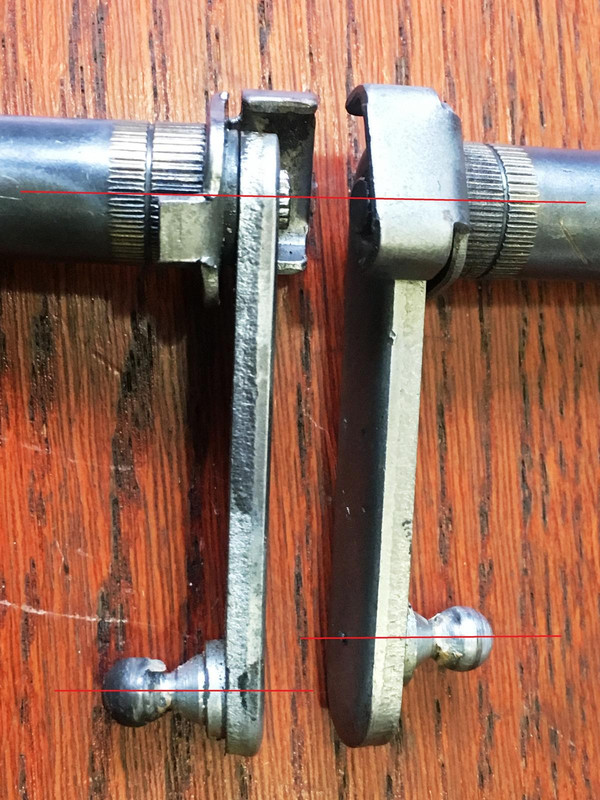 I also want to swap the splined turrets across to one worn wiper mechanism from another less-worn one. I'm aware that many have dismantled these in the past, if only for plating purposes (Chris Vine ?) but can't find any advice about how best to do it. I'm putting this question up as a separate post as it might facilitate others' searches when looking for the subject. 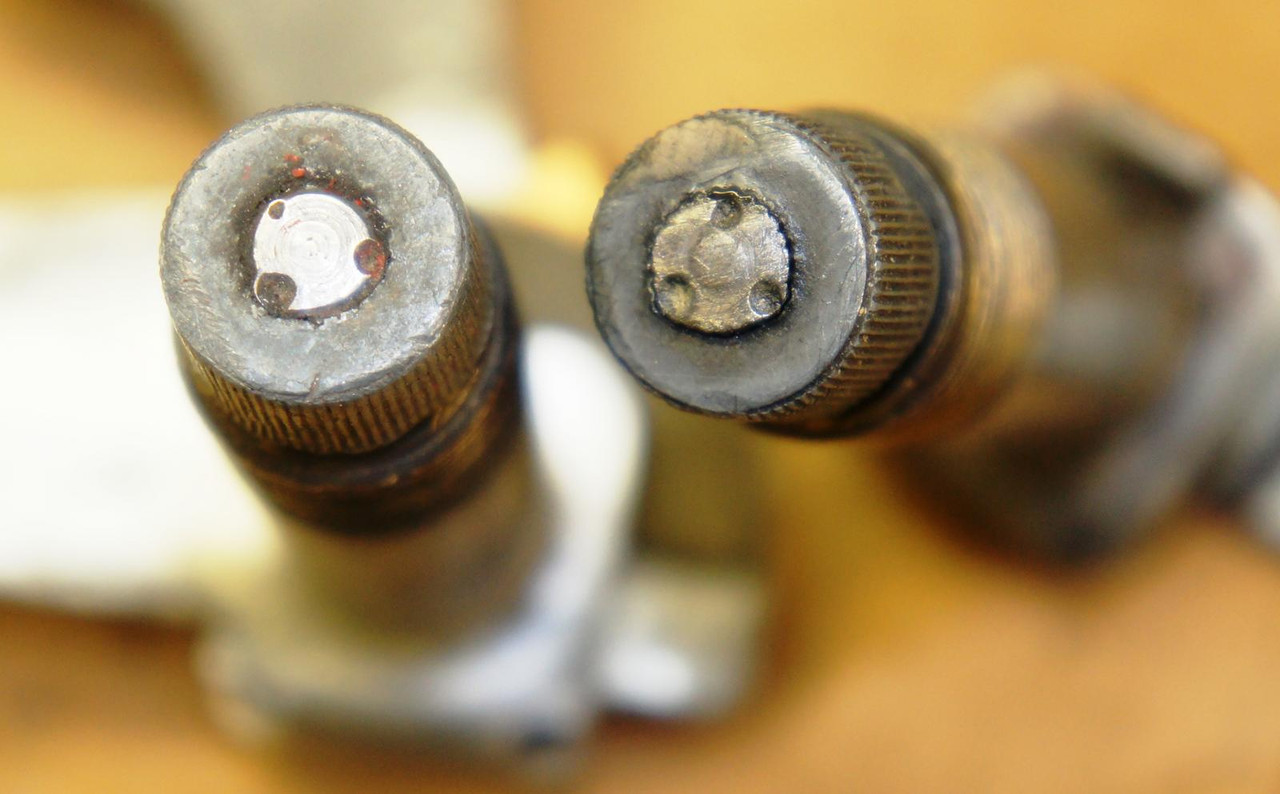 Coming late to this Rory, but I recall being mystified and thankful in equal parts when I dismantled the mech on my first E-type triple rack. Mystified at how something apparently thrown together by Heath Robinson (or “Rube Goldburg” over here) works at all. Thankful because it generally gives so little trouble around the sloppy bits, as opposed to the spindles. Just as a data point, the S1 2+2 has different length arms, so if somebody has been in there before it’s possible they used odd parts despite buying spares for a triple-arm E-type rack.
1E75339 UberLynx D-Type; 1R27190 70 FHC; 1E78478; 2001 Vanden Plas
Show post links
Top

The different lengths are for a reason and it depends if the rack is for LHD or RHD which end the odd one goes on. I know this from rebuilding and converting my rack. However I can’t for the life of me remember which end it goes. I THINK there is a reference to it in the Service Book.
It is to do with the far left or right?? wiper arm needing to perform a different arc.

Sorry Rory one of those answers that doesn’t give an answer!

Happy New Year by the way.

Found it! From the Service Manual..... 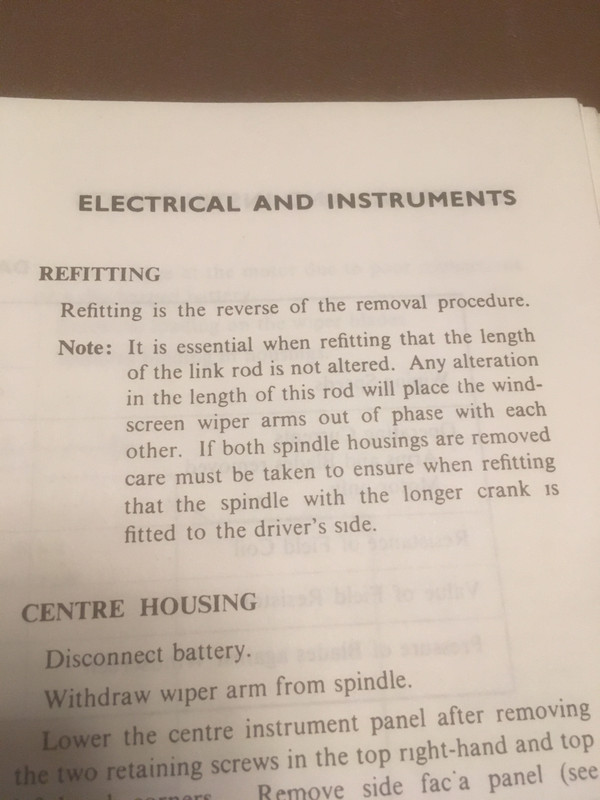 Simon, the service manual tells you what to do, it doesn't give you the reason why the longer crank has to be on the driver's side but as you suggest, it's to do with the arc traveled.

On a three blade car, the driver's arm crank length and the centre crank should be the same, it's just the passenger one that's shorter.

If you do a LHD to RHD conversion and don't swap the outer wheelboxes over, it's not the end of the world you just get unnecessary overlap between the driver's wiper and the centre one and your passenger ends up short changed.
John

Thanks for confirming that John, it was pretty much the conclusion I'd come to regarding the lengths when I did mine but was reluctant to publish my theory. You know what they are like on here if it's not backed up by a well researched thesis

Many thanks for these nuggets and especially for your functioning as a research librarian Simon.

Unfortunately I can feel the nagging need for a mock-up on another dreaded jig, to prove all this to my satisfaction AND so I can SEE the eccentric functioning in full view ! How exciting would that be.

Having read this thread, I could help but check my spindles as I am doing a RHD conversion

Curiously my middle spindle is the longest one...!...and I had assumed that the car had ever been apart...was it always the case that the drivers side was longer..?...mine is chassis number 888330

If it is the case then I will just have to take it all out and do it again...!!!

Just to clarify, when you say "spindle" do you mean the spindle itself or the spindle arm. It's the arm that is longer on the driver's side to give the wiper blade less travel across the windscreen.

Good point Simon.....need to check again as it was the spindle I had looked at....currently sitting on the tarmac in one of BA’s finest as we wait to take off...so far 30 mins delay...

Hi
With respect to the spindle cranks...mine are different lengths for driver(longer) side and Passenger(shorter side) the ball joints being welded at the end of each, as opposed to some where the cranks are similar lengths put the effective shortening is achieved by the ball joint being welded nearer to the fulcrum.
See photos
Robbie 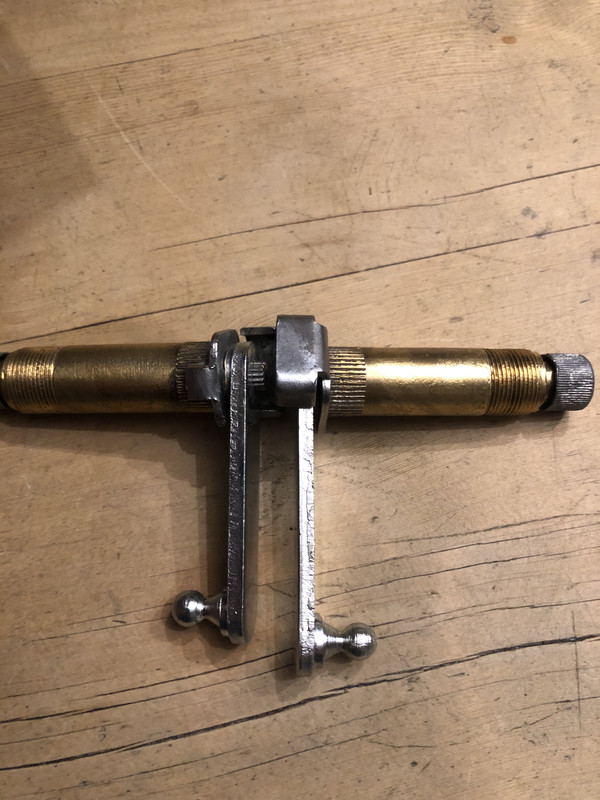 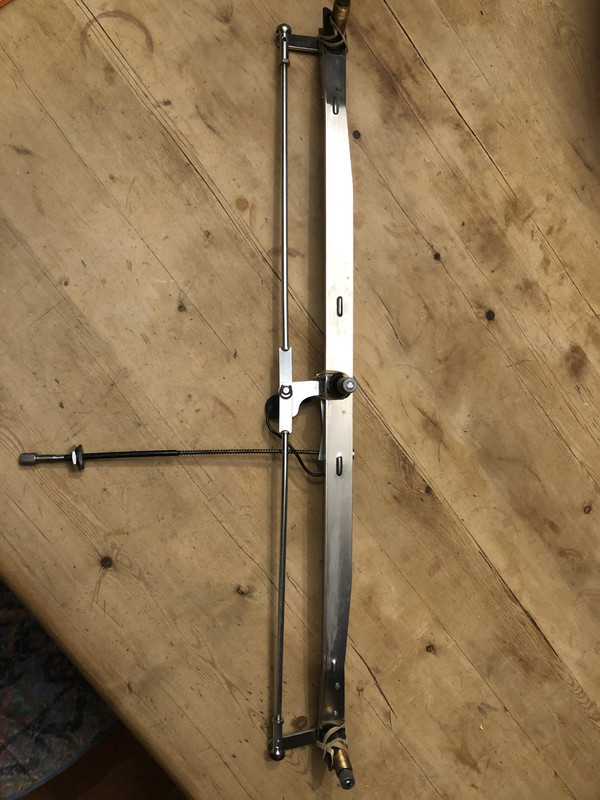