Hi all , just being nosey,
How many others on here are doing 1;8th models be it revell or the metal de agostini kits .
Regards nosey of orpington lol
Its a way of life not a hobby
Darren . 64 4.2 modded 69 4.2
Show post links
Top

Not me, Darren. Having seen the high standard you’ve put into your model recently there’s no way I’d even try to compete 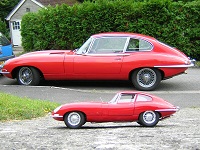 At the time in 2003 when I bought my E I used to have my boys visit me at weekends. I have three children, only the boys wished to visit. I didn't push the issue with my daughter. James, my middle child and younger of my two boys, was a more regular visitor during 2003. Not long after agreeing to buy the E-Type I sold Custard, the name my Triumph Dolomite Sprint had been given.

'Custard?' During the 1980s there was a children's cartoon on TV called Roobarb and Custard featuring a dog and a cat. The cat character was bright purple and called Custard. My Dolomite was also bright purple and the car's previous owner's nieces gave it the name. The name stuck. Selling a Dolomite Sprint that hadn't been used on the road for seven years proved a surprisingly simple task – they were highly sought after, especially purple ones. I even had prospective buyers calling me to buy it on spec without a viewing. Rather than play buyers off against each other I sold the car to the first buyer who came to view. He seemed happy enough to trailer it 250 miles home the following weekend. During the next week I cleared the garage and painted the walls with white emulsion and the floors with red 'garage floor' paint. I mounted kitchen cabinets on the floors and walls. These were spare units from a salvage lot I acquired some months earlier which I'd used to fit out the kitchen in my house. And then I waited for the car to be commissioned by The E-Type Centre (a business which is, thankfully, no longer operating. But that is another loooong story).

James came to stay the following weekend and noted the empty and freshly painted garage. He asked what I was going to replace Custard with?
I don't know yet, I lied.
Dad, you must buy an E-Type Jaguar. (I genuinely have no idea what prompted this. He cannot have known I'd already paid a deposit on an E-Type.)
OK, says I, any particular E-Type?
A red one. With seats in the back so Alex and I can ride in it. (And he cannot have known the car I'd agreed to buy was a red 2+2.)
Anything else?
No, just a red E-Type with four seats.
OK, I swallowed, not daring to tell the truth. Instead, I planned something else.

By James' next visit I had bought the Revell 1/8th scale plastic model kit of an E-Type. During the following three or four visits James and I built the model, piece by piece. We found a nice bright cherry red paint to give it a shine, and by Easter 2003 we had the car complete. 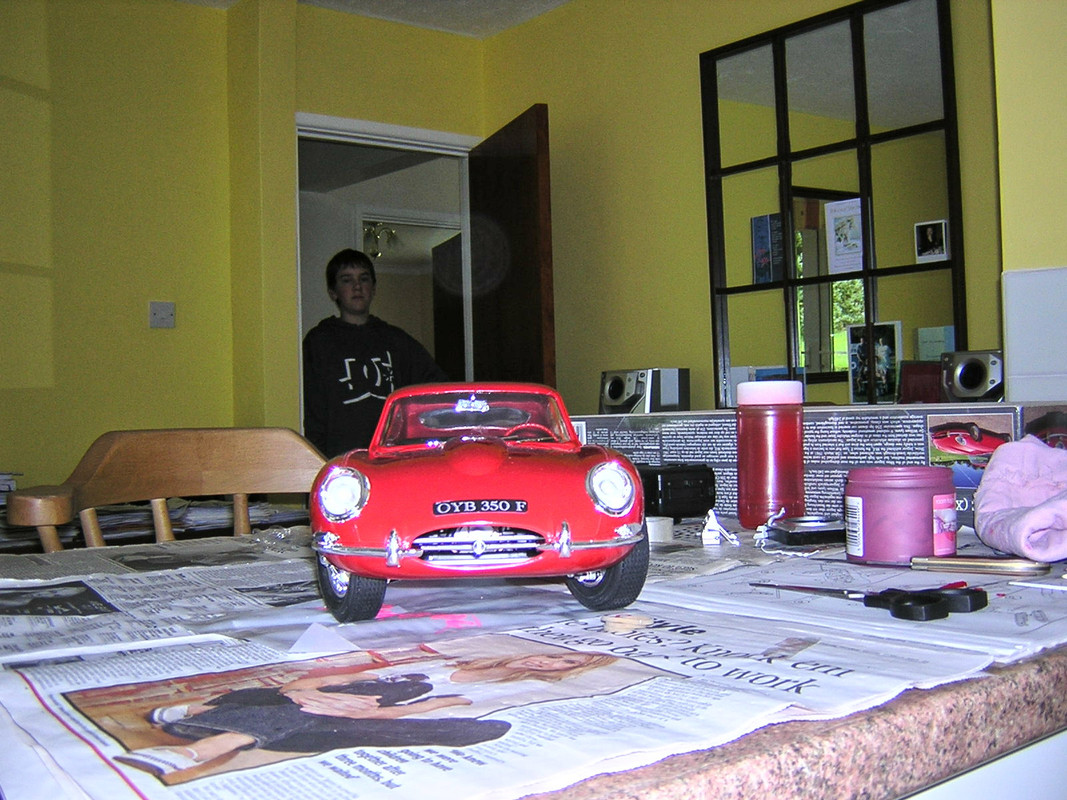 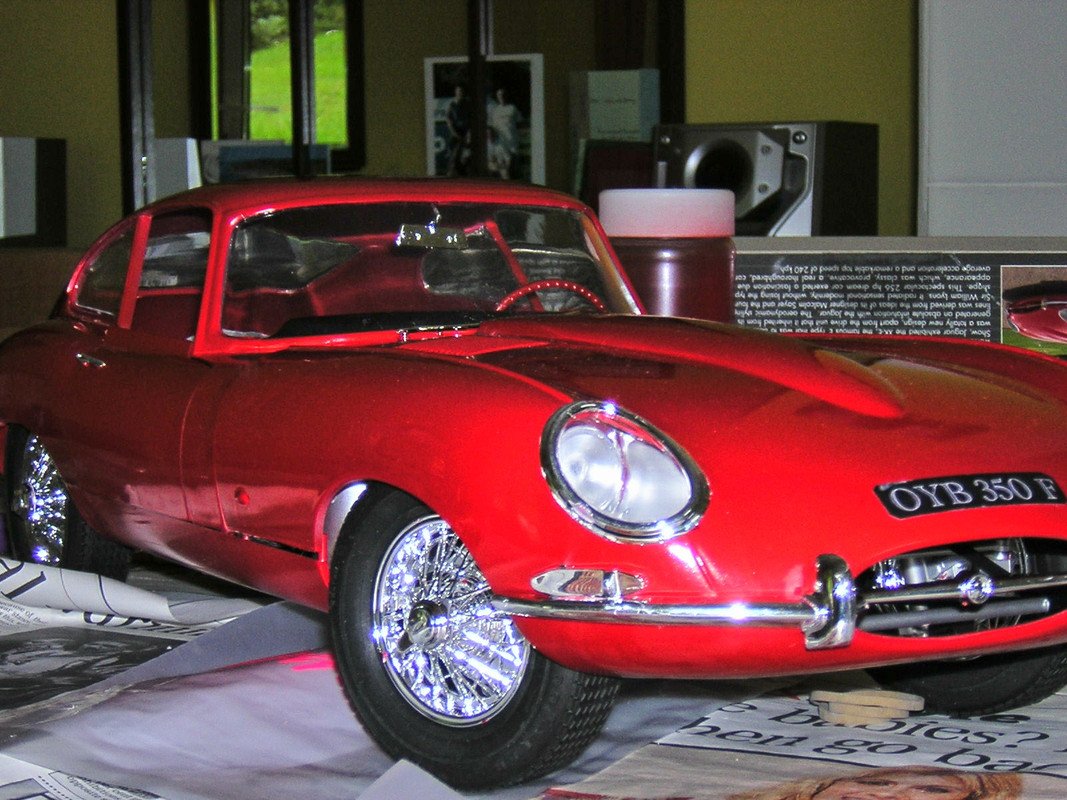 It did look good, although I think the panel fit could have been better. I also made a number plate that matched the car I had bought, but which James did not yet know about. When James came next time the real E-Type was in the garage. Have some photos of the moment he first saw the car. 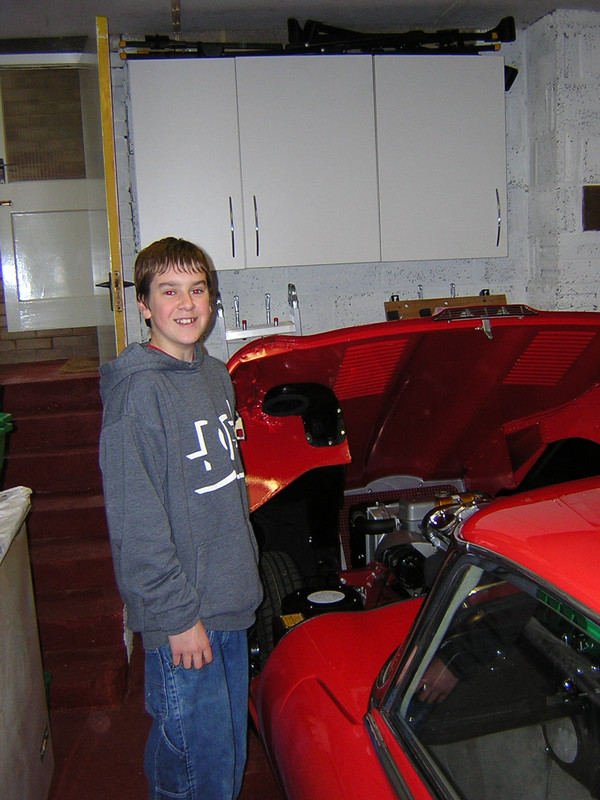 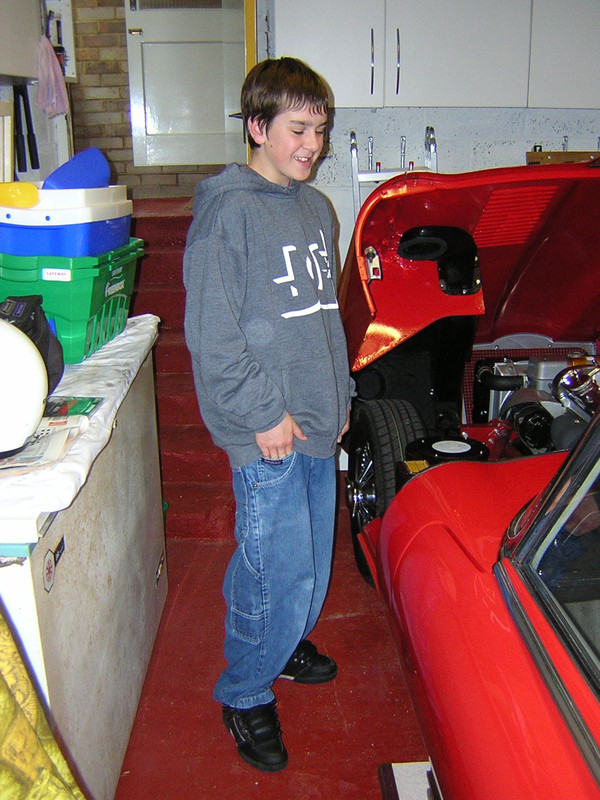 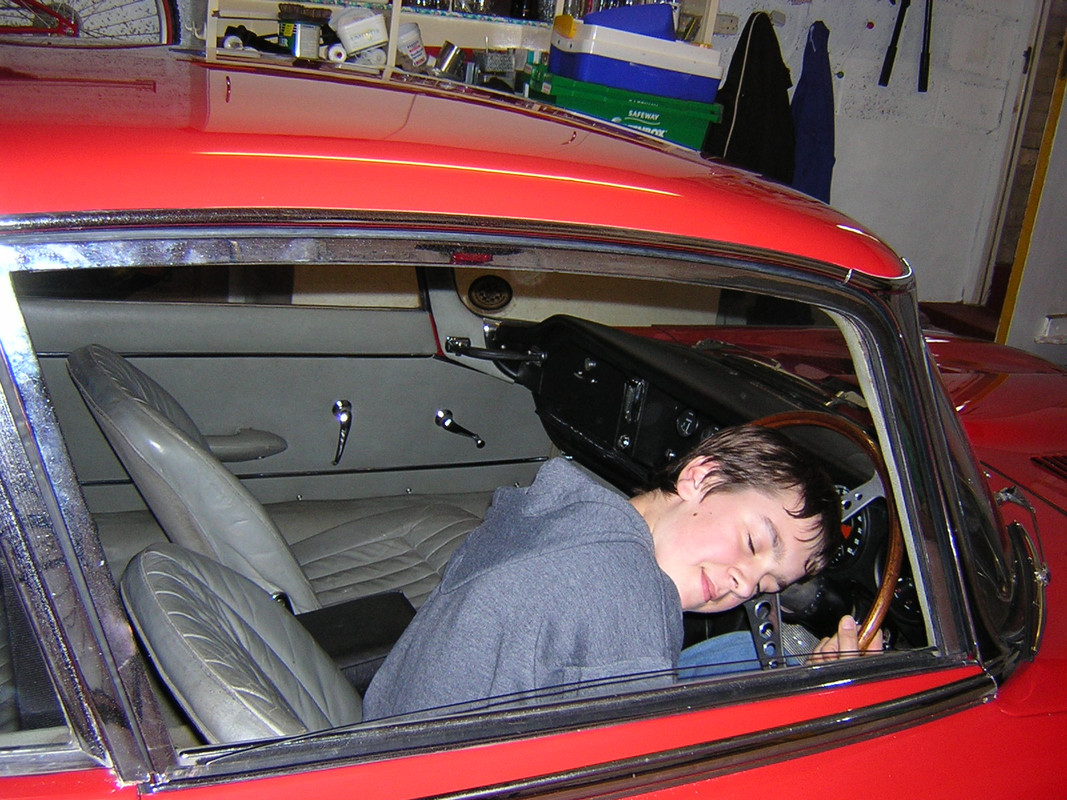 Since then the model has done some travelling. It's been taken to Prescott several times and to a small number of other 'shows' as a gag. I also have a photo taken on my steeply sloping drive which is a non-photoshoped trompe-l'oeil. For many years this was the 'wallpaper' on my computers. And just for fun there's another shot of the model on the E-Type's bonnet with an even smaller model on its bonnet. 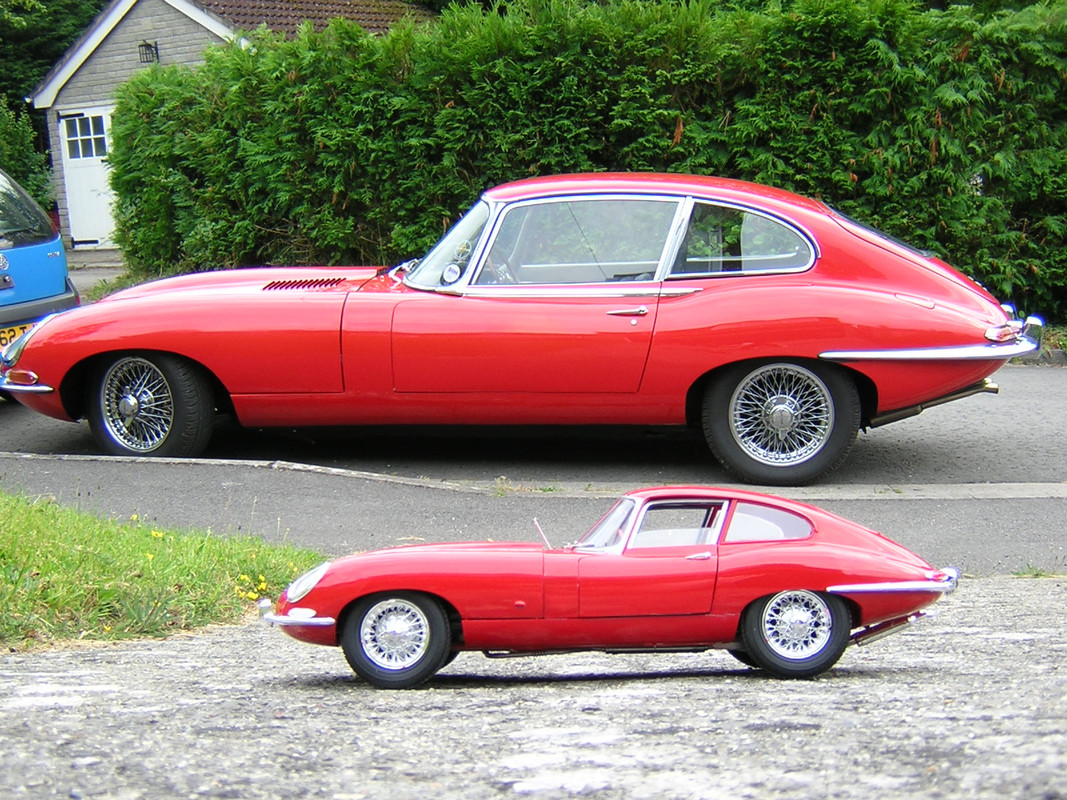 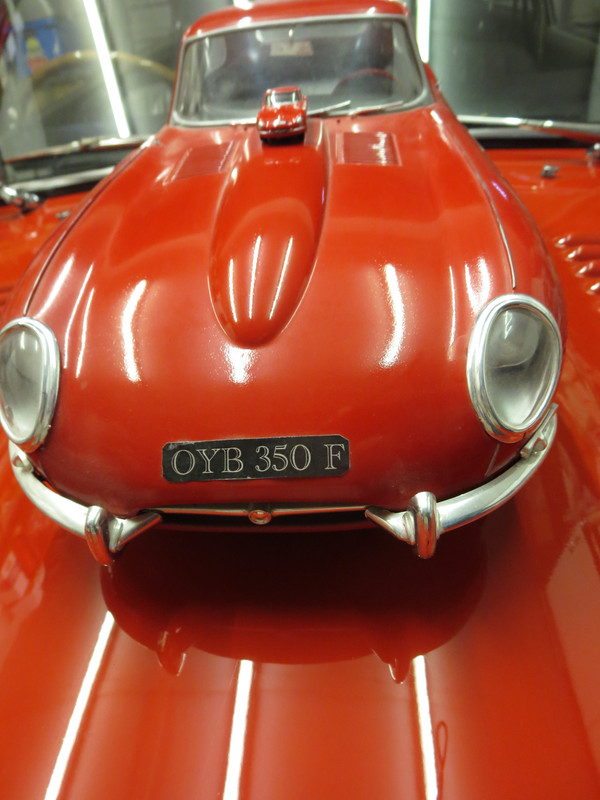 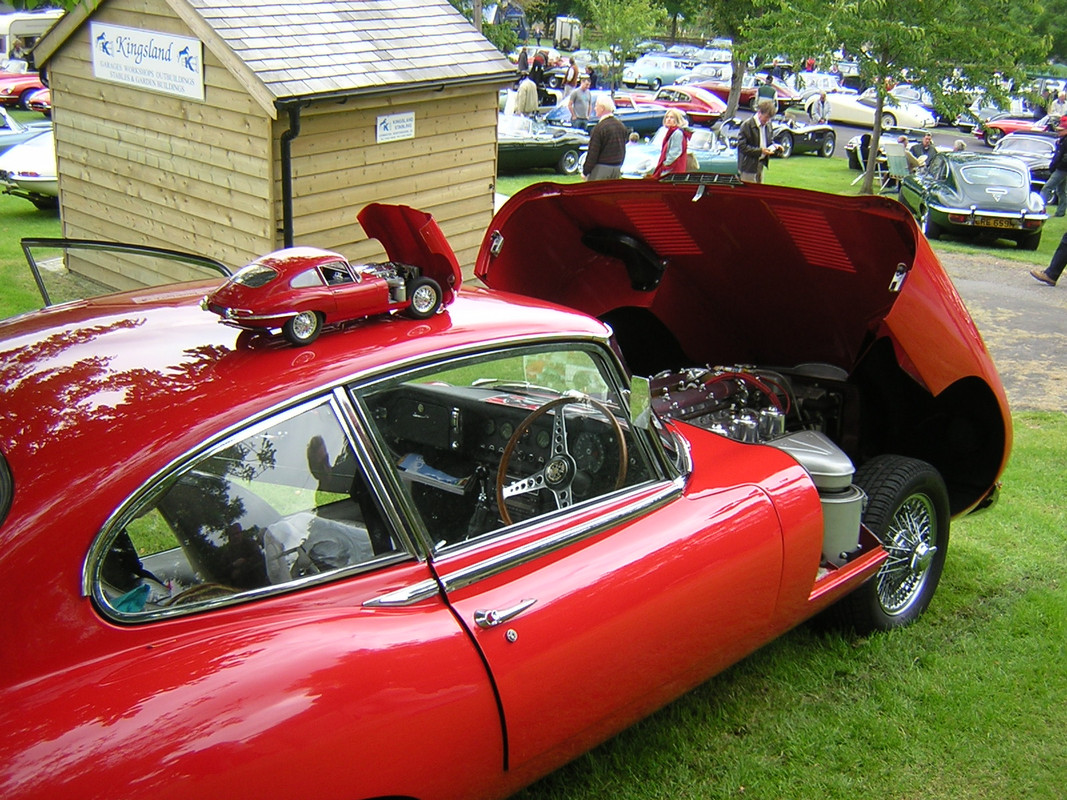 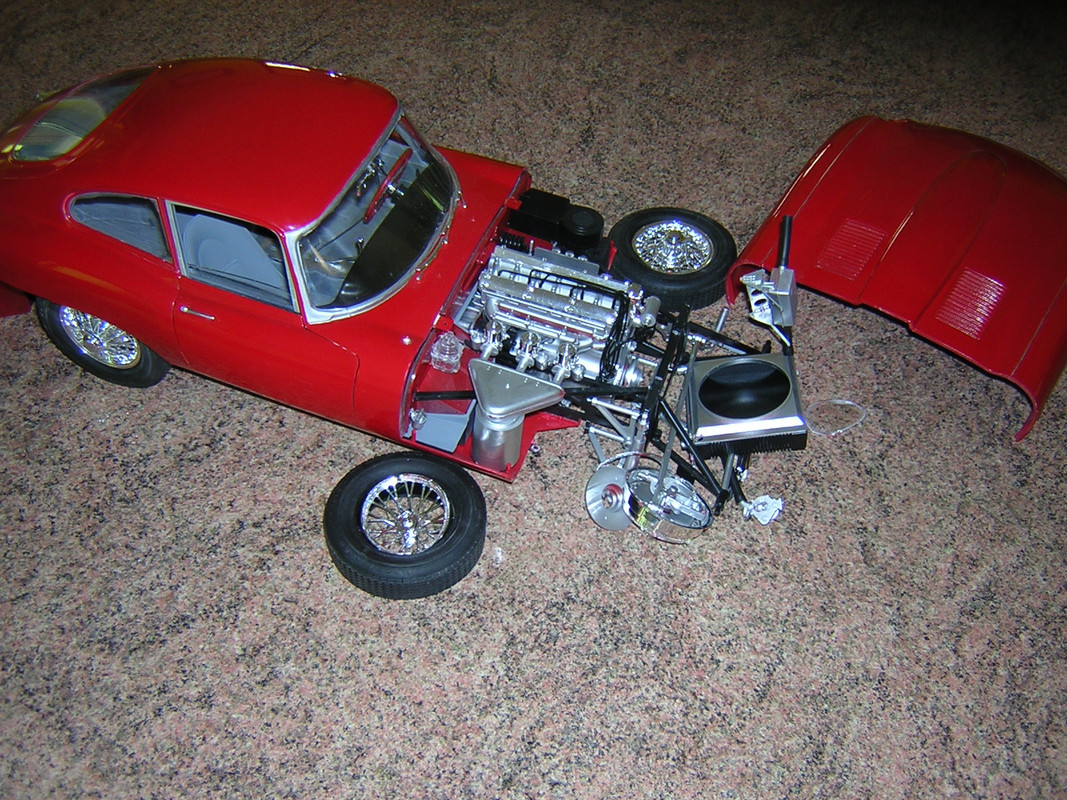 Thankfully, I still had lots of polystyrene cement.

As a result of the passing of time the model has lost some of its minor parts. Indicator lenses, the aerial. And the front suspension no longer does its job. The model equivalent of its TBs have gone soft! But it may still be wheeled out for gag at some time in the future.

I do recall another example. When I was purchasing the real E way back in 2003, there was a completed Revell model in the office of The E-Type Centre.

ps My E-Type has a name, it is called Freddie. Freddie, the Red E. The Revel model doesn't have a name.
Chris '67 S1 2+2
Show post links
Top

Lovely story, Chris. I can only imagine your son's surprise when he walked into that garage!

You all know about my "project", which should hopefully jump forward again soon. It's a miserable evening so I decided to have a go at a template for the OTS hood cover, which I will need to fabricate out of some sort of black material 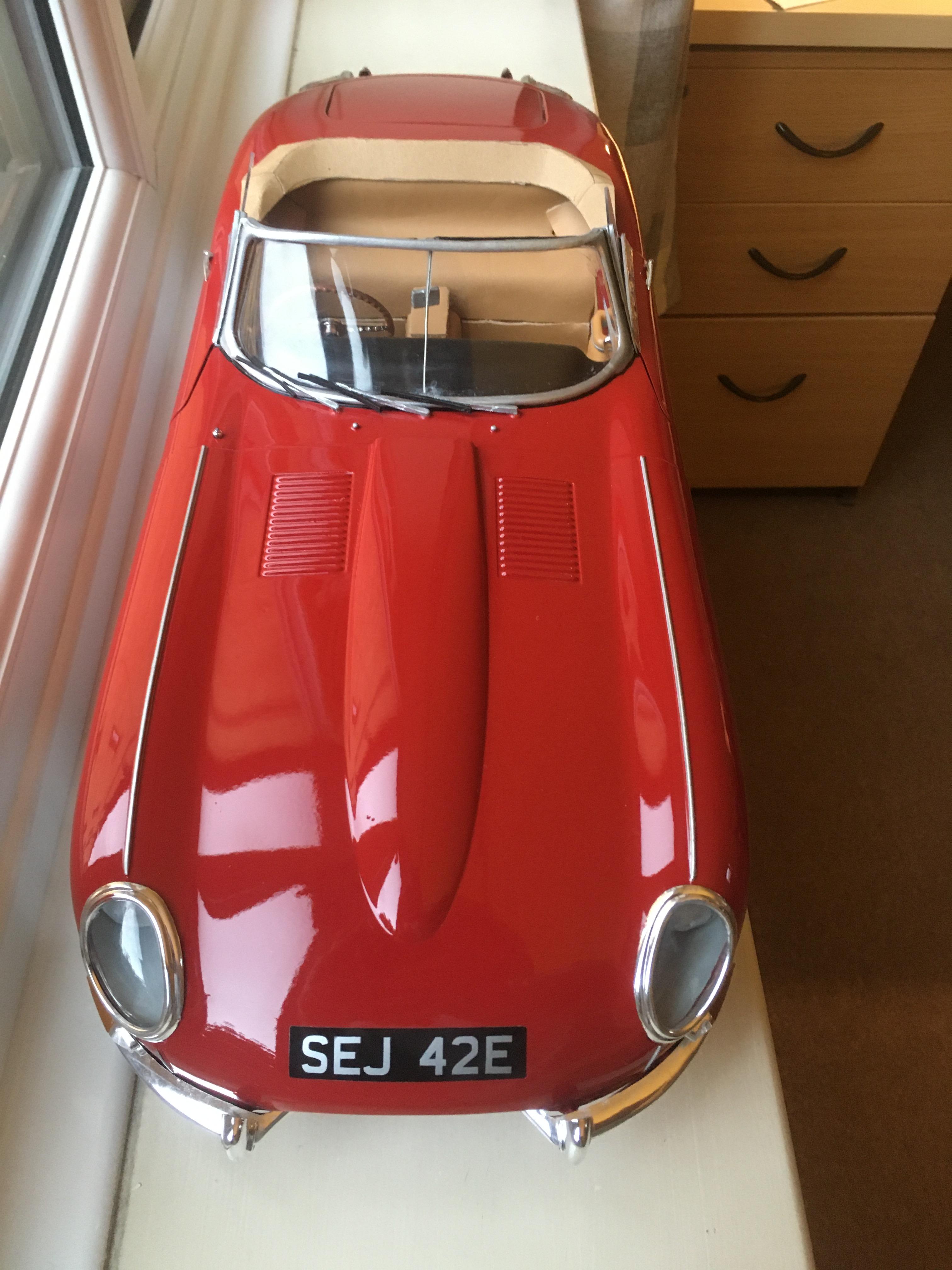 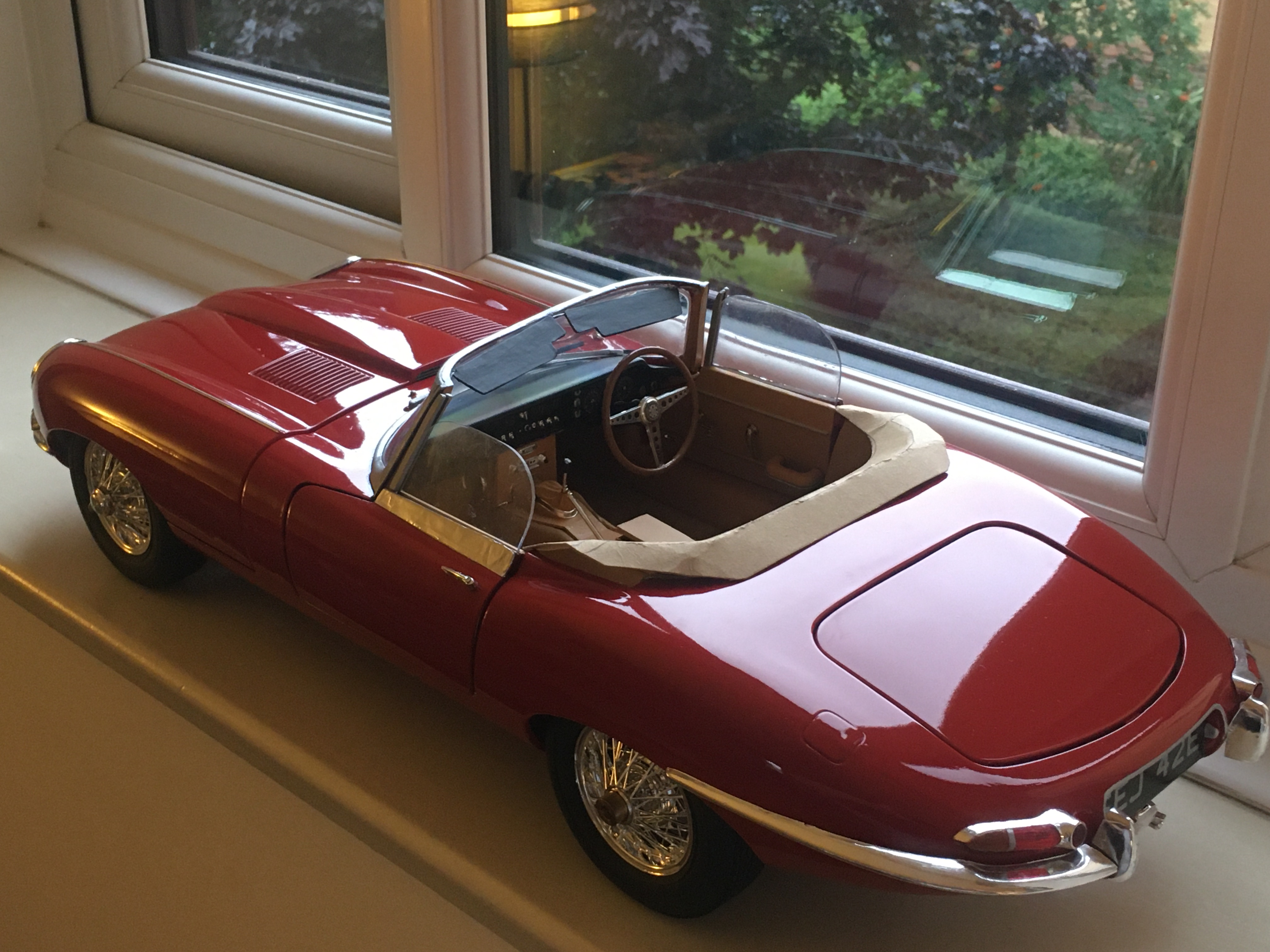 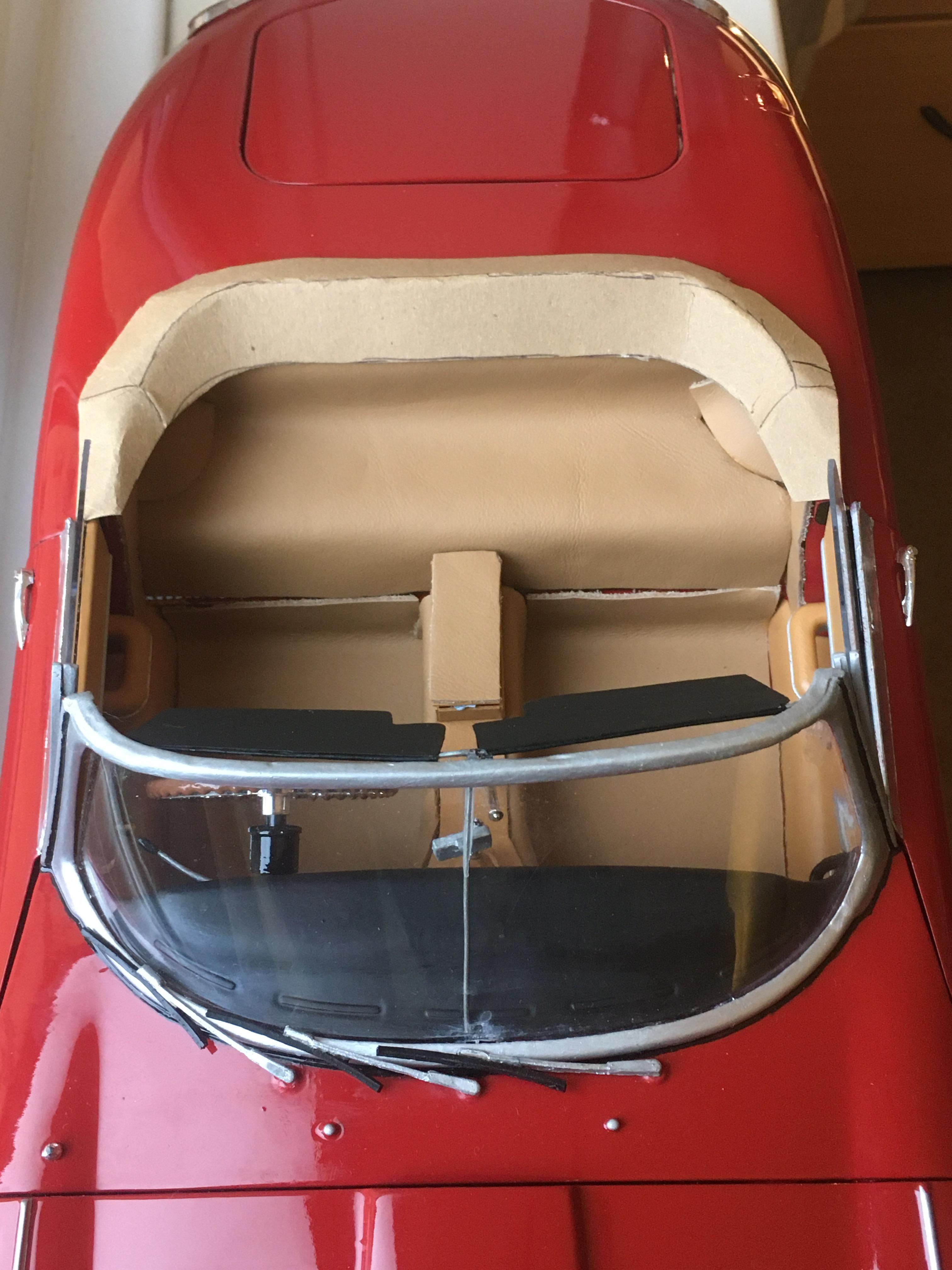 I also gave it a once over with the Autoglym to rid it of finger marks and grease. Now my flat smells like car polish!

I really love the Carmen red, what a fabulous colour. Let's not forget I am nowhere near skilled enough in spraying for the finish to turn out like it has. Richard the lifesaver again!
Simon Johnson
Postgraduate Synthetic Chemist at The University of Bristol
E-type Club magazine contributor
Chasing the dream of a S1 4.2 OTS, but plan on getting an E ASAP!
Lucky passenger in a 1962 FHC - See restoration thread
Show post links
Top

I have completed the Agostini model. It is a monster.

The wheels nearly defeated me, until I remembered Ebay exists.

There are around 380 parts in the wheels alone, each spoke is a separate item.

Thanks Ian from Bedford who assembled them for a reasonable fee.

The parts in the rest of the kit are superb, it has a metal body. All the trim pieces are almost perfect and the paint quality is superb.

It is over 60cm long, like the Revell, which I have. It is very heavy at somewhere around 12 pounds I would guess.

The development of the kit must have taken some serious skill and man hours. It is only when you physically see it do you realise the level of detail they went to. It even has a wiring loom legible gaugesand squishy seats.

Expensive? No. For what you get I would say very good value. 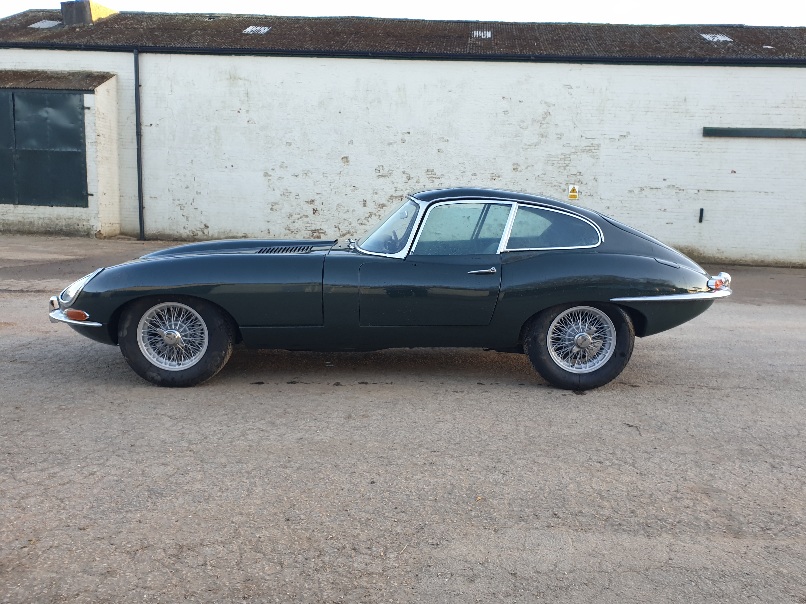 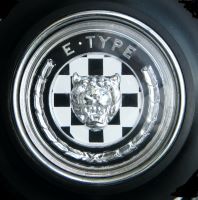 Very impressive - the model looks better than the real thing . How long did it take to build ?
Mark

I built both! The model was quite a bit cheaper though!

I didn't really know how it would go, I just started buying it and kept going.

Someone told me the main dealerships were offering it built for over £8k, although I have never verified this. I could believe it.

I would guess it would take 80-100 hours to put together? Apart from the wheels it is pretty stress free because the parts fit and are well prefinished. Hardly any glue, if any.

The wheels are £100 for 5 to get assembled. I just could not do it, the parts are tiny and it is extremely fiddly, requiring the use of a jig.

The only thing that surprised me about the model was that it didn't come with a little man, who had a little key that fitted into the car and you could watch him start it up and drive into the sunset.


I started putting the real thing together in December 2020. First thing was the loom.

To be fair, all the assemblies were ready to fit, so it was a case fitting the usual stuff - heater pipes, loom with dash, headling, brake pipes, fuel pipe, wiper rack and squirters, bulkhead fittings and pedals, rear irs, front lh/rh suspension, prop engine box, trim, bumpers, lights, door fittings and hatch then interior. I fitted the engine and box with the bonnet on. Got a little bit left to do, goes like a rocket with a big valve head. 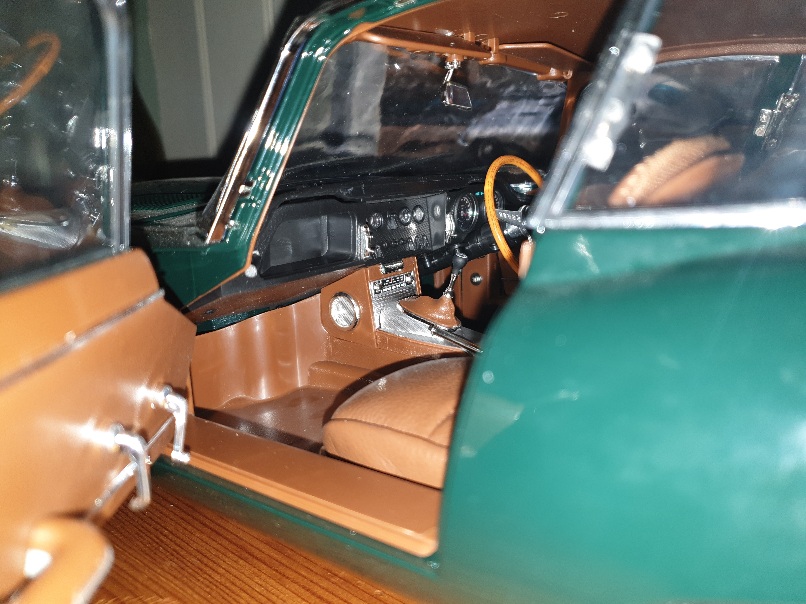 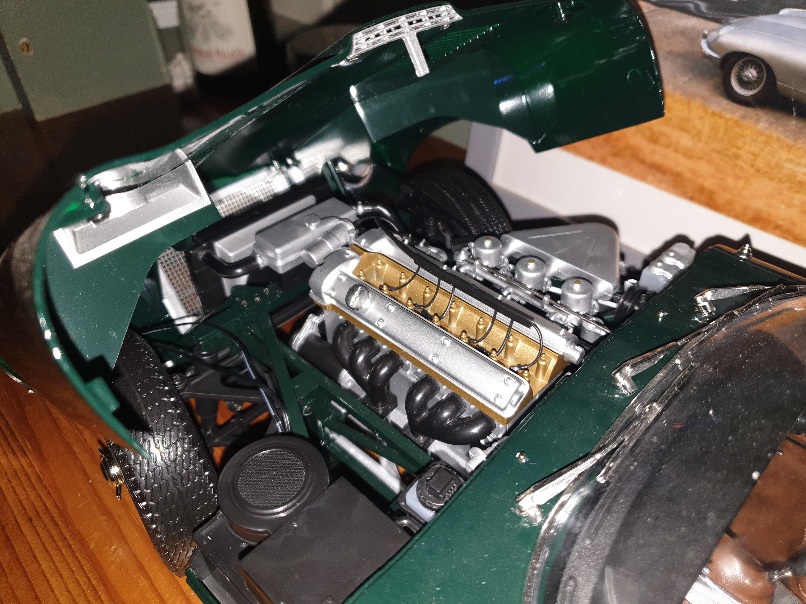 I would love to have a go at one, I particularly fancy a crack at the wheels (am I mad?) which I'm sure would look terrific on my own 1:8 creations too 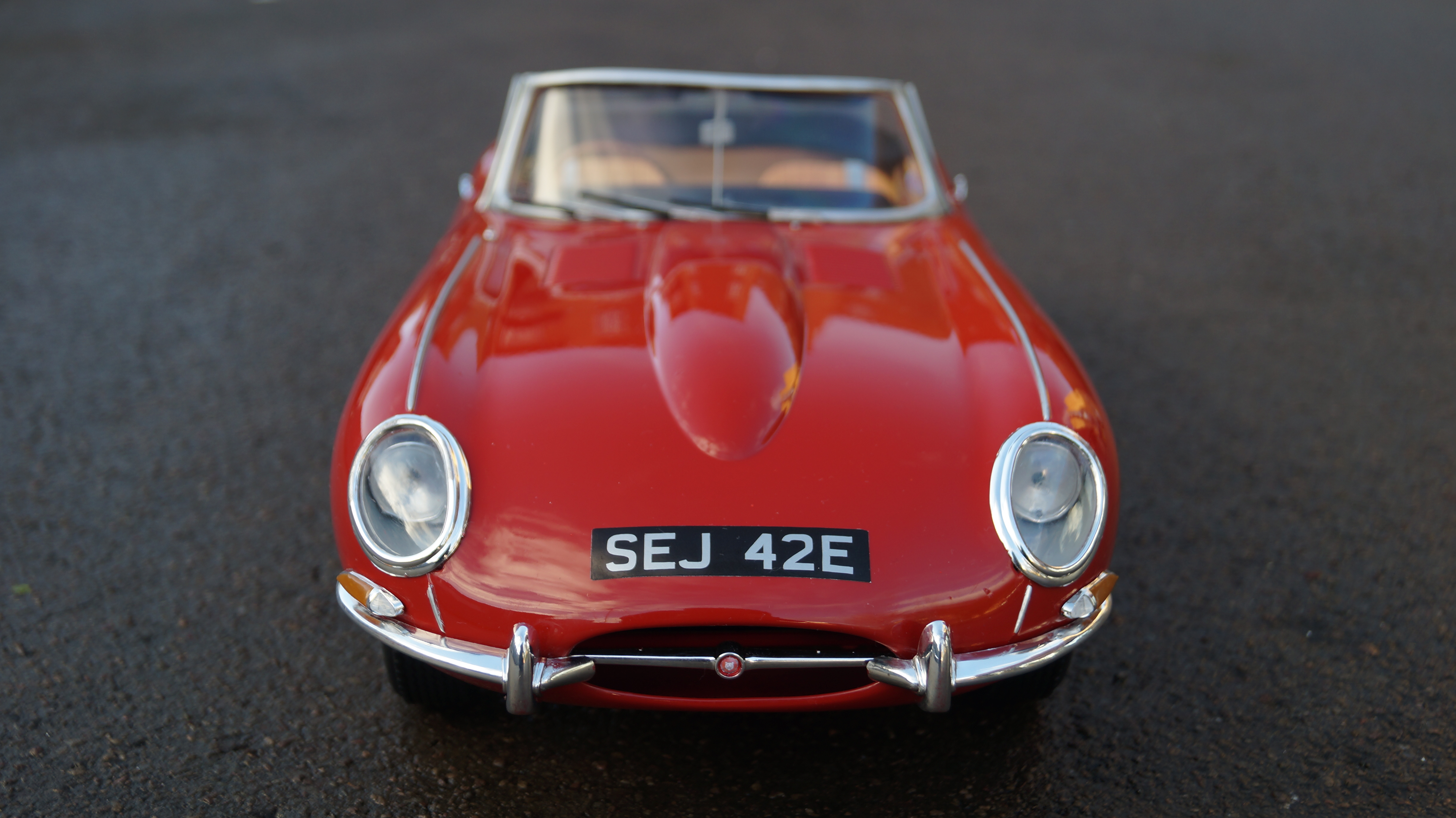 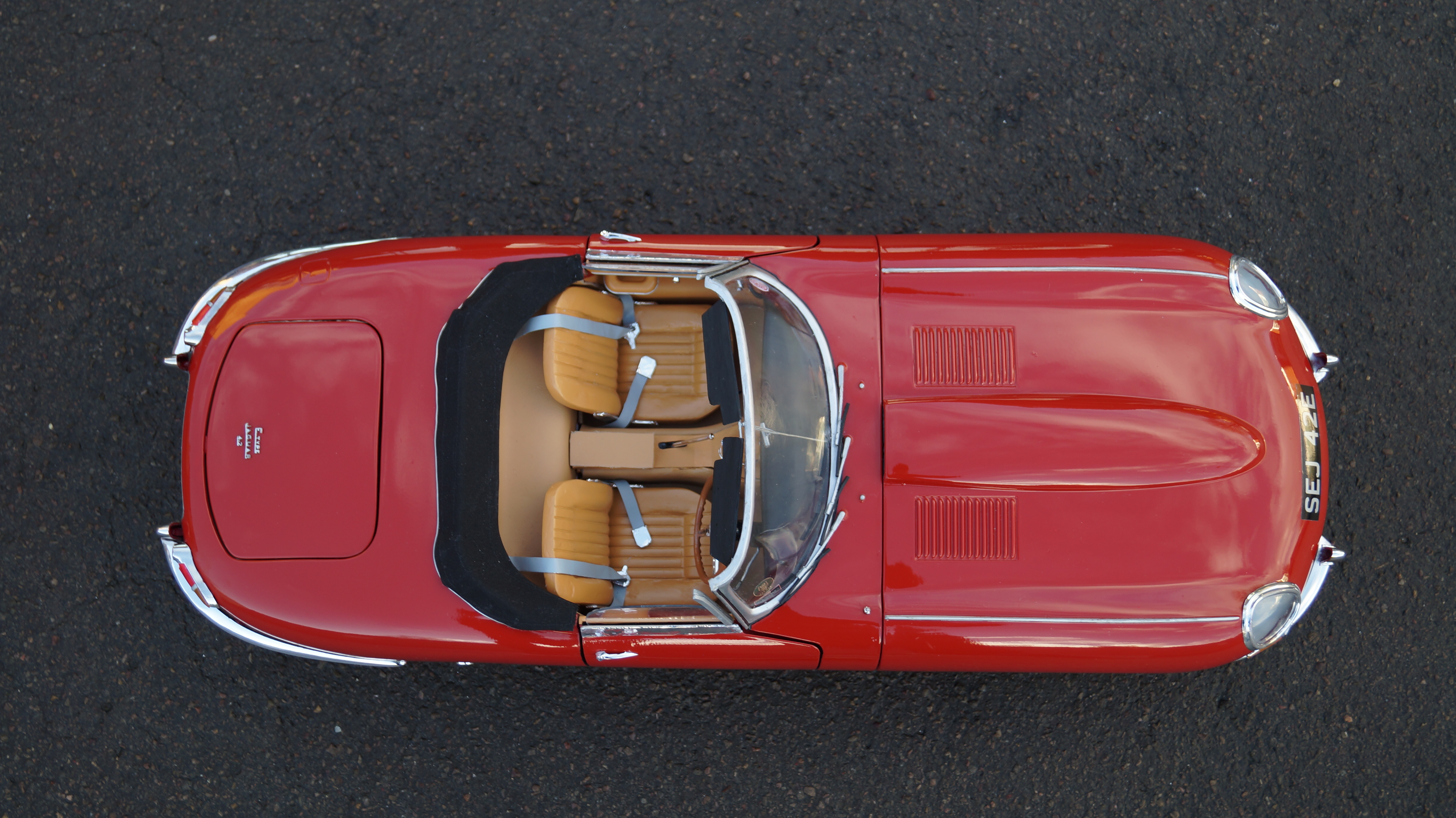 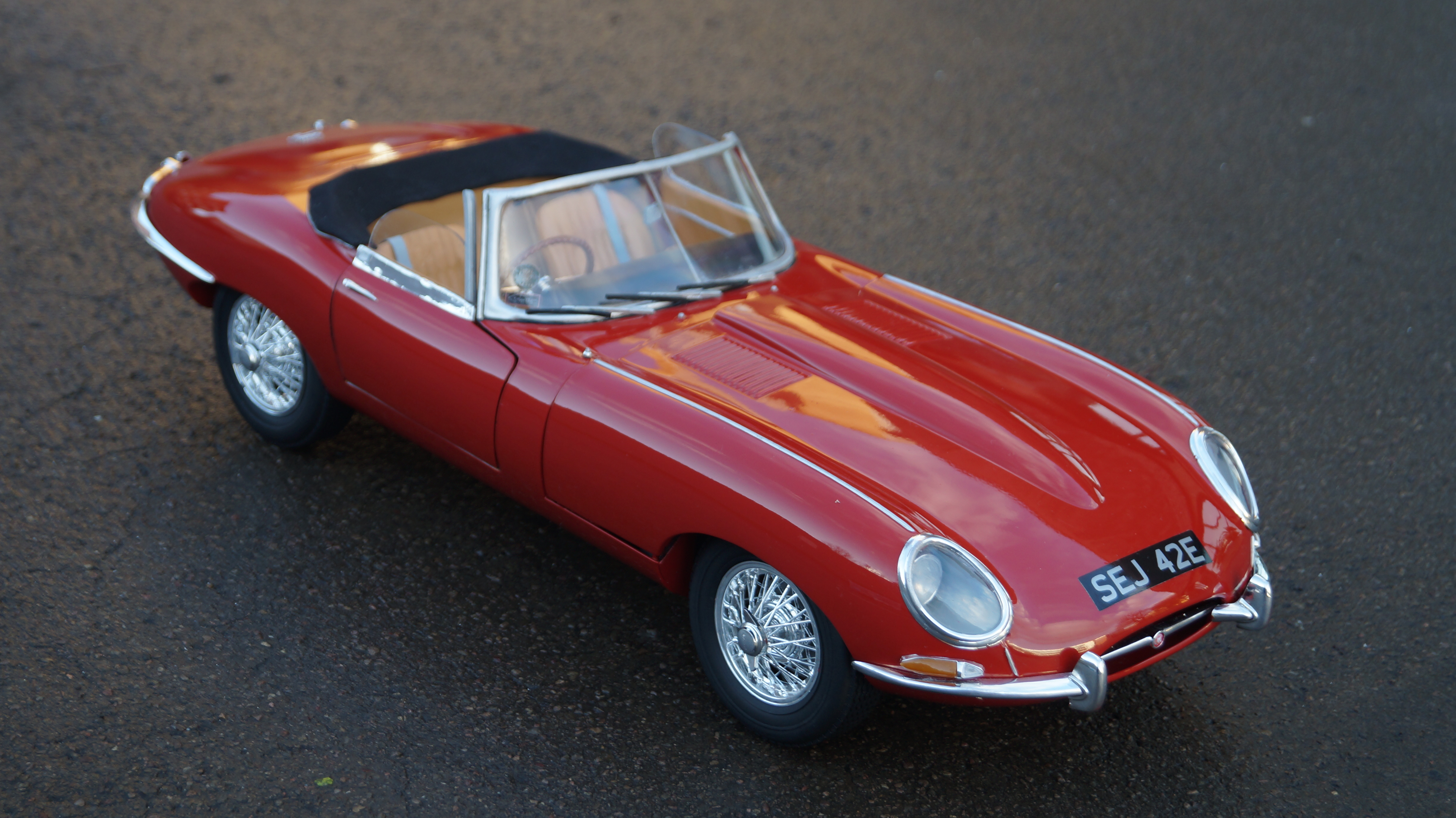 I simply cannot justify spending 850 quid on a model however. I guess it's all relative (and the quality is of that diecast model seems good), but part of the fun for me is painting everything and dictating how everything should look. Making a kit that looks identical to everyone else's kind of ruins it for me, not least because you'd have to go through a lot of work to change the finish on parts.

For the bits of this car I have used in my own model (more generic parts like the fuel tank and a few bits fom under the bonnet), the finish has been excellent, and it would be a shame to have to modify the whole kit.
Simon Johnson
Postgraduate Synthetic Chemist at The University of Bristol
E-type Club magazine contributor
Chasing the dream of a S1 4.2 OTS, but plan on getting an E ASAP!
Lucky passenger in a 1962 FHC - See restoration thread
Show post links
Top

I did Monogram once and after a row with Deagostini, who stopped delivery for 40,- Euros a month very early on and Model Space (which is basically the same) who wanted to continue for 50,- Euros, I stopped the monthly delivery and gambled. I could purchase two sets for a significantly reduced price, almost two for one.

And I have another monthly delivery running as this was also significantly reduced. I have not built one yet and will most likely start of with a cream painted one. For me also, need to find time for doing it...