I need a new Otter switch for my s1 4.2 fhc; I see both Barratts and Burlens offer these.

Burlens offer two, one with switch closing at 80 degrees, and one closing at 90; is there an opinion as to which temperature range is the best? I’m conscious I don’t want the fan to be cutting in all the time unnecessarily and will be running a CoolCat fan so it should cool far more quickly than the original item.

Consider the Coolcat thermostatic switch (made by Mitsubishi) as it is accurate and very reliable. 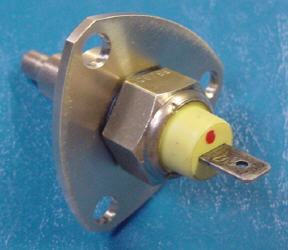 The switch can be easily replaced but you need their housing.
David Jones
S1 OTS OSB; S1 FHC ODB

The appropriate "temperature range" will be related to the thermostat opening temperature. Expect your radiator to pull ~13'c out of the coolant, or to look at it the other way, expect the engine to add ~13'c to the coolant temperature it receives back.

If you succeed in dropping the temperature down too far then the thermostat will simply choke off the radiator's supply of water.

Thanks David, will look at those. I ordered the fan about 2 years ago and it’s been sitting in a box; now finally at the stage of using it. Obviously should have dealt with the switch whilst importing the fan but never mind.

When the XK engine was first built , and certainly right up to the end of the Mark IX in 1961, the design running temperature was 70 degrees C. IIRC the lowest thernostat now available is 74C, and that is what I would aim for . About the only supposed advantage of running a higher temperature is better efficiency, but it comes at a price, with the probablity of nucleate boiling at hot spots near exhaust valves, and a worsening of the already considerable tendency on the XK ( in common with many other hemispherical head engines ) to pinking even on part throttle
Show post links
Top
Post Reply Previous topicNext topic
5 posts • Page 1 of 1