Dipstick "collar". Can it move and how is it fixed?

#1 Dipstick "collar". Can it move and how is it fixed?

I've been reading up on previous dipstick and oil level threads.

My own dipstick is somewhat out of spec, too long from collar to oil level hatching and bottom of the dipstick, which may have led to my engine previously being under filled!

My dipstick measures 11.5 inches from the collar to bottom end (pic1) so is about 1.75 inches too long. Hence to an E Type novice the oil level would "look" correct BUT be waaaay low!

I'm wondering if the collar could have moved/been moved by some gorilla in the past? It seems pretty well fixed in its current position but I can't see a weld and haven't tried too hard to move it (back) down the dipstick.
At the collar end the dipstick is nice and shiny as if it hasn't been scuffed by years of sliding in and out of the block (see pic 3). IF the collar could be moved down the dipstick to where the shiny part finishes it would be the correct length (pic 4) which is why I'm wondering if it moved/been moved

What do you guys think? Has the collar moved or is it just the wrong dipstick? 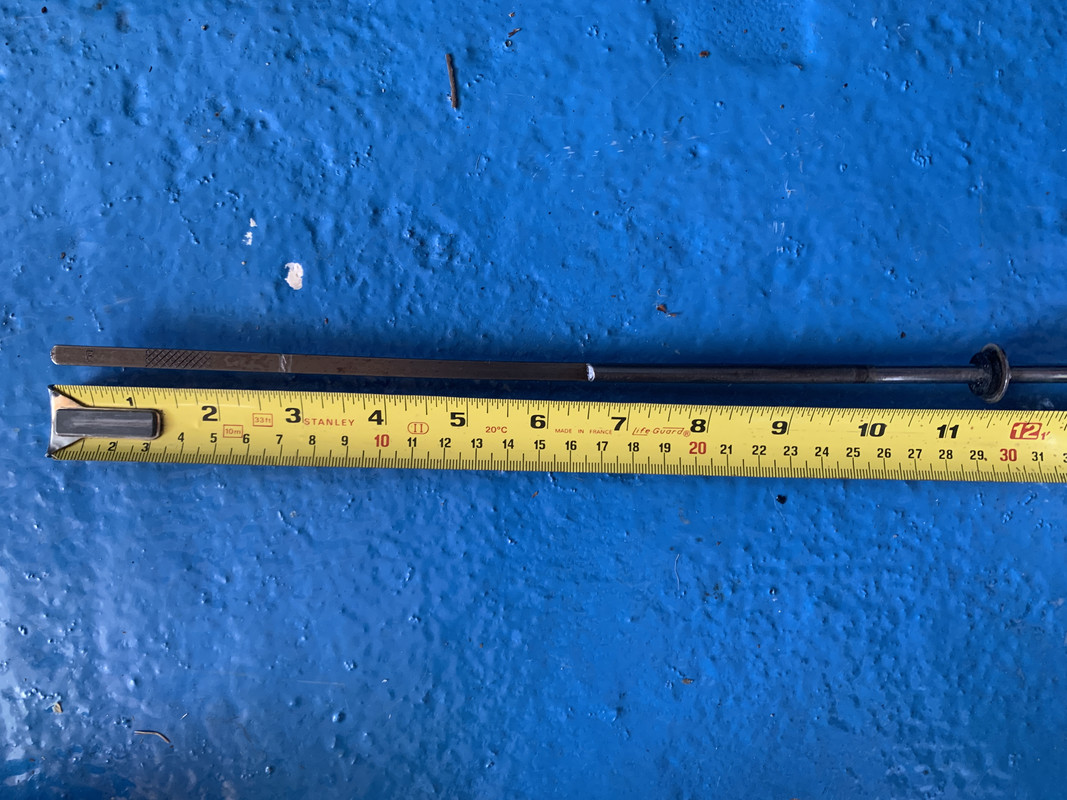 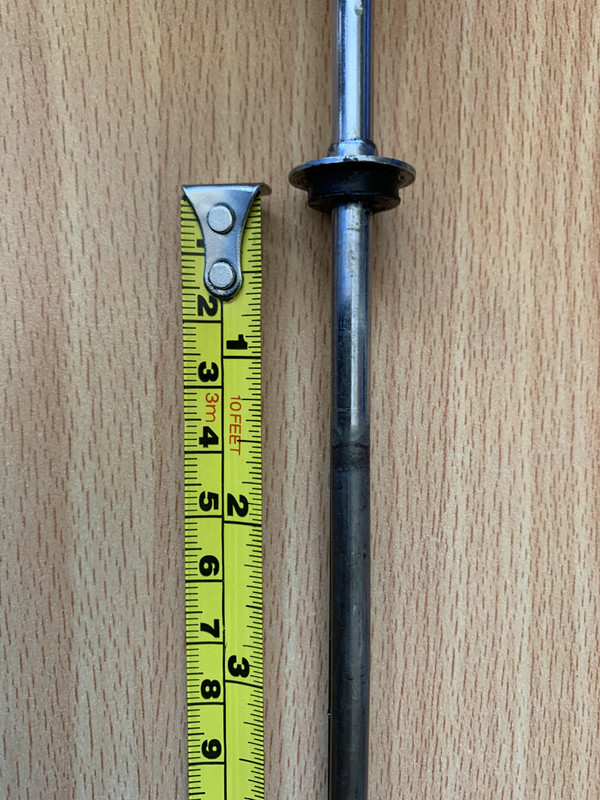 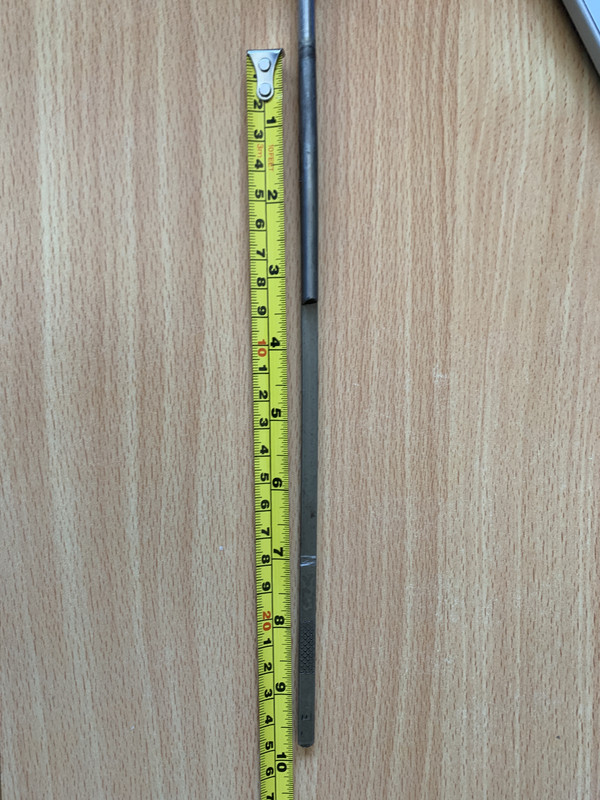 If it is a correct E type dipstick it should have a capital E engraved on it . Whether it is correct or not, it looks to me as though the dipstick has slipped downwards through the collar . The one way really to tell is to drain your oil into a clear container, and then use it to refill the engine with a measure until you have put precisely 8.5 litres ( 15 imperial pints) in, and then use that ( after allowing perhaps an hour for the oil to drain down thoroughly ) to calibrate the stick at the full level

Ideally, once calibrated to the correct length then the collar can be soldered, but provided it is thoroughly cleaned, I would think that Araldite would be equally effective
Last edited by christopher storey on Mon Jun 20, 2022 4:20 pm, edited 1 time in total.
Show post links
Top

Note the felt washer needs to be in place for a correct reading. Part number C17585 available from SNGB.

Looking more closely at your lower photograph I can see an E on the stick, so it is the correct item but has slipped downwards. My earlier post should have suggested silver soldering , not soldering, as a remedy
Show post links
Top

Thank you chaps. With a few light taps on the collar I was able to slide it down the dipstick to the correct position

I shall solder it in place.

However, after draining the old engine oil I only measured just over 6 litres including the contents of the oil filter. So even allowing for not all of the old oil draining out it has been underfilled by over 2 litres!

I've probably done a couple of thousand miles like this. The engine has been running well, doesn't smoke or seem to burn any oil. The only issue is has been it running hot (on the water temp gauge).
I've been chasing potential cooling (water) issues and fitted a new water pump after checking for sludge in the block (none) as well as checking the fans work correctly and the basics like thermostat etc. Certainly a lack of oil won't help keep the engine cool so I'll be interested to see if that was the issue

The question remains what long term damage might the engine have sustained? It doesn't make any nasty knocking noises at the moment but I guess overheated bearings will have worn prematurely. Is it more likely that the top end (camshafts etc) would suffer from oil starvation more than the bottom end (big end/main bearings) in this situation?

Anyway I've refilled with the correct 8.5 ltrs of good quality oil and will just have to see how things develop.

Mark : unless you were consistently hammering it speed and throttle wise, or cornering so as to produce considerable side loading and oil surge, ( from which you would almost certainly have noticed transient loss of oil pressure ) I doubt that your engine will have suffered any harm . The cams are pressure fed and so without loss of pressure are very unlikely to have suffered harm . These engines are incredibly tough, and I often recite the report on my Father's Mark IX which did actually run a big end at 3 years and 100,000 miles. It was put in to the factory service depot which existed at that time, and came back a few days later with a bill for new shells and a report that the crankshaft would have passed inspection for installation in a new vehicle !
Show post links
Top

Thanks for the reassurance Chris

I'll report back if the engine temp issue has been solved by running the correct oil level. My next step was going to be a new/re-cored radiator but maybe I won't need it.

Thought I would check my dipsticks and adjust as necessary. But come up with a few differences for later 4.2 engine.
Both have the E at the above distance down from cap, one is the later S2 type with the red disc which is effectively one long half round rod bent double. The other an earlier one with a riveted in bottom section added to a solid rod.
Hash marks on both 3/4 inch (or 24/32 not 19/32)
Cap to top of hash marks 7 15/16ths
Filling with correct amount of oil brought the level to top of hash marks and, yes, the felt washer is on the stick.
Measured with a good quality steel rule.

Any thoughts or comments?

Depends how thick your felt washer is

Steve, I can always rely on you for well thought out and very helpful responses

Looking at a 1997 copy of Haddock page 102-103 would suggest the one dipstick is “The early flat dipstick. The flat stick is inserted into a slot in the handle, and retained by two rivets.” For engines before R9699, about February 1963.
So for a 3.8 engine, interesting to find in my S2 built 1969. And it has a dot pattern at the oil level area rather than the hash marks.

Uh yes Geoff...you can rely on me

.....photo from the knowledge base.......only worth quoting measurements to 1/16 in if you quote how thick your felt is 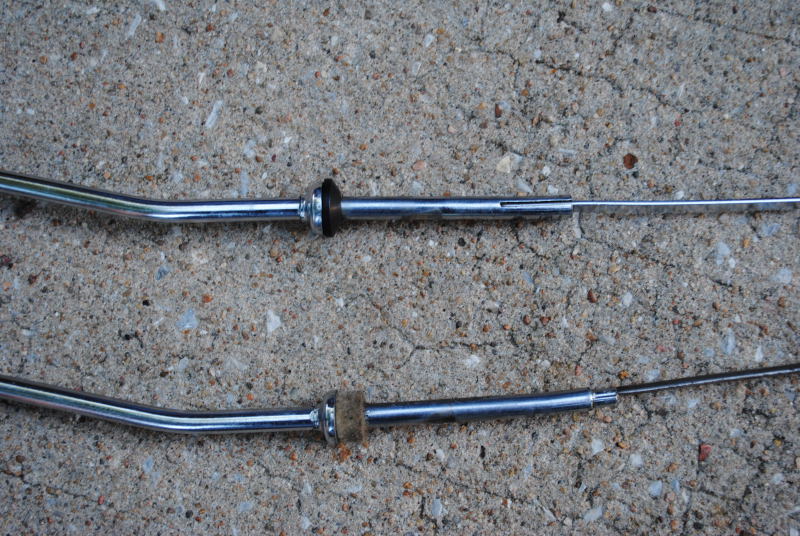 Steve, as our leader/headmaster quoted from the cap not the felt I did the same

Many thanks for that photo, now to find someone willing to pay me lots of money to get their 61 or 62 car absolutely concours

The correct oil level doesn't seem to have made a big difference to my "running hot" issue. Still tends toward the right side of the water temp gauge and nudges the red section when stationery in traffic.

Hang on, Mark ! Before you go in for major expenditure, have you measured the actual temperatures involved ? A relatively modest investment in an infra-red thermometer may save you a lot. The electric gauges which were introduced with the Mark 2 were definitely a step backwards from the beautiful bourdon tube gauges of the earlier cars, in that their accuracy was very debatable . Whilst this may more commonly be a problem with the oil gauges ( see the many threads on this board ) the temperature gauges are not exempt from them, and it is well worth checking the accuracy of your setup before going in for major replacements
Show post links
Top
Post Reply Previous topicNext topic
14 posts • Page 1 of 1