Hi everyone,
I started my car today went first turn on key ,but when restarting i am just getting a clicking noise.
Have done the usual checks connections battery etc. and they all seem ok(just fitted a new loom section for motor)
If i fit a new motor what would anyone recommend ,having the original reconditioned or a new hi torque one?
Has i have heard the Hi torque ones are not that much better than a good original.
Any thoughts?
My car is a1971 s3 auto.
Rob Gill.
v12 etype 2+2
Show post links
Top

Have done the usual checks connections battery etc. and they all seem ok(just fitted a new loom section for motor)
If i fit a new motor what would anyone recommend ,having the original reconditioned or a new hi torque one?
Has i have heard the Hi torque ones are not that much better than a good original.

Hello Rob,
If the engine is in reasonable condition and in good tune (starts reasonably easily), then I can't observe much difference between the two. I've just replaced a client's original with a high torque unit; accordingly, I base my comment on first hand experience. The original failed like turning a light switch, one minute it was working perfectly, then sounding like the battery was very flat (which it wasn't). Voltage drop measured at the battery was down to circa 6VDC and current draw over 600amps when cranking. The cranking exercise was no more than a second (just enough to get a reading); any more would have seen much Lucas smoke escaping from the battery lead.

SNGB offer a reconditioned option; I'm not sure if that required a swap with your own; but on price basis there is an argument for going with the new, high torque unit.

There are two different pinions used through the year models of the S3. Both have 9 teeth but different OD and therefore different gear tooth DP. Very early S3 cars have an OD of 29mm, whilst later cars circa 25mm. The centre distance between the starter motor and the flywheel remains the same and therefore, the diameter and number of teeth in the flywheel is increased for the 25mm OD pinion; make sure you determine what you have before ordering a new High Torque S/Motor if that's the way you end up going.

Before fitting a High Torque starter motor, measure the distance from the face of the Bell Housing, where the Starter Motor mounts and the front face of the Ring Gear of the Flywheel. Then measure from the face of the mounting flange of the High Torque Starter Motor (that surface that interfaces with the Bell Housing) to the outer end of the Pinion (the end of the pinion that will be closest to the Ring Gear when in place). The dimension gained from the Starter Motor measurement should be less than that gained from the Flywheel measurement. I failed to do so, reasoning that the supplied unit would be correct (what was I thinking) and when the engine was first started, it was obvious that the engine was then driving the starter motor. When I made the measurement described earlier, it proved that the Pinion had 4mm engagement with the Ring Gear when the Starter Motor was at rest.

I contacted the supplier and was told. "you need the spacer we supply". When that came and after installing it, I made the measurements and found that there was still 0.1mm interference between the two gears. This small interference would have created a worse scenario than the 4mm, as I suspect the end face of the Pinion would have been shaved by the Ring Gear, rather that just spinning the Starter Motor's armature. Again I contacted the supplier and got the old spiel, "we've been supplying these for the last 20 years and this has not happened before". "Whatever, its happening now", was my reply. They then informed me that I need the thicker flange that we also supply. Funny they should have that rectification part for a condition that hasn't happened in 20 years; I guess I was just lucky.

Take a spanner to the front of the engine and turn the crank clockwise a few degrees.
Now try again.
If it works, then all is still good; if not, you'll have to investigate further.
kind regards
Marek
Show post links
Top

Had this problem on my early ser 3, it was just the connection to the starter though. If your solenoid on the starter is clicking though it could be that the contacts inside the solenoid are burnt or worn away. If so you will need to remove the starter and dismantle the solenoid to rectify.
Derek
64 ser 1 fhc, 71 ser 3 2+2.
Show post links
Top

Thanks that sounds like a good possibility.
Is that much of a job ,has i have taken the starter off with a view to getting it reconditioned.
Rob Gill.
v12 etype 2+2
Show post links
Top

Hi Rob, I don't think it would be too difficult as you have already done the hard part in removing the starter.
The solenoid plunger operates a lever that moves the starter gear to engage with the flywheel and on full travel the plunger also engages with the two contacts internally to energise the motor. these contacts are the internal ends of the copper setscrews that the cables connect to. If you manage to disassemble the solenoid from the starter and remove the plunger you may be able to clean or even replace these setscrews. It's certainly worth a try.
Derek
64 ser 1 fhc, 71 ser 3 2+2.
Show post links
Top

These may help, this is an XJS starter but much the same. the solenoid is only held on by two setscrews and the cables. 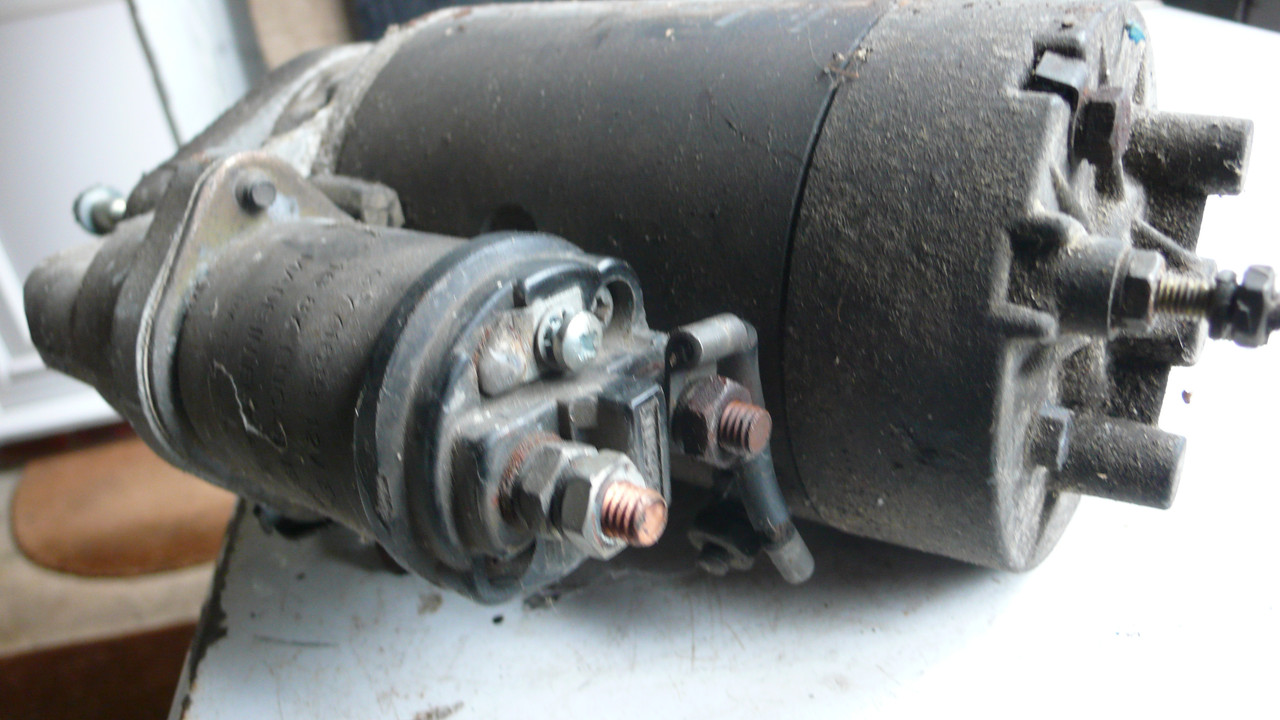 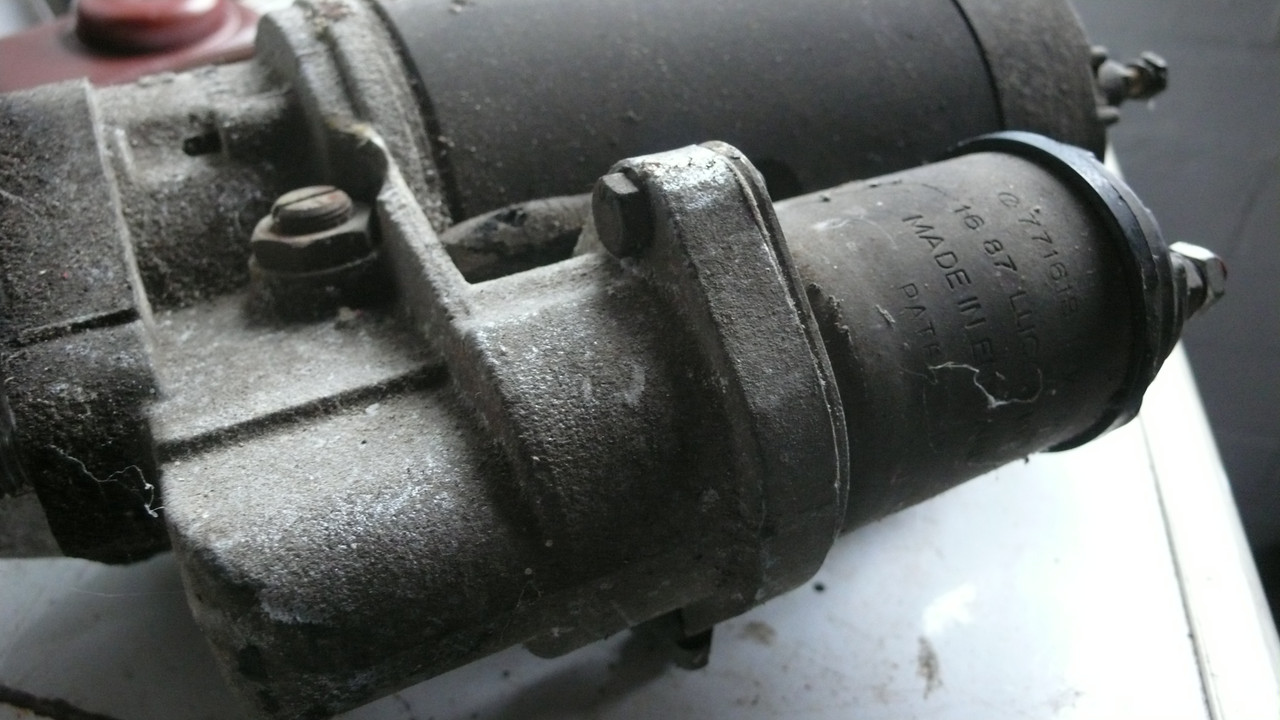