by Tom W
After experiencing what I believe was oil thinning on a recent long drive, I’m looking at fitting an oil cooler. I have a complete S3 XJ6 oil cooler and filter head setup. I thought I would document the swap here. 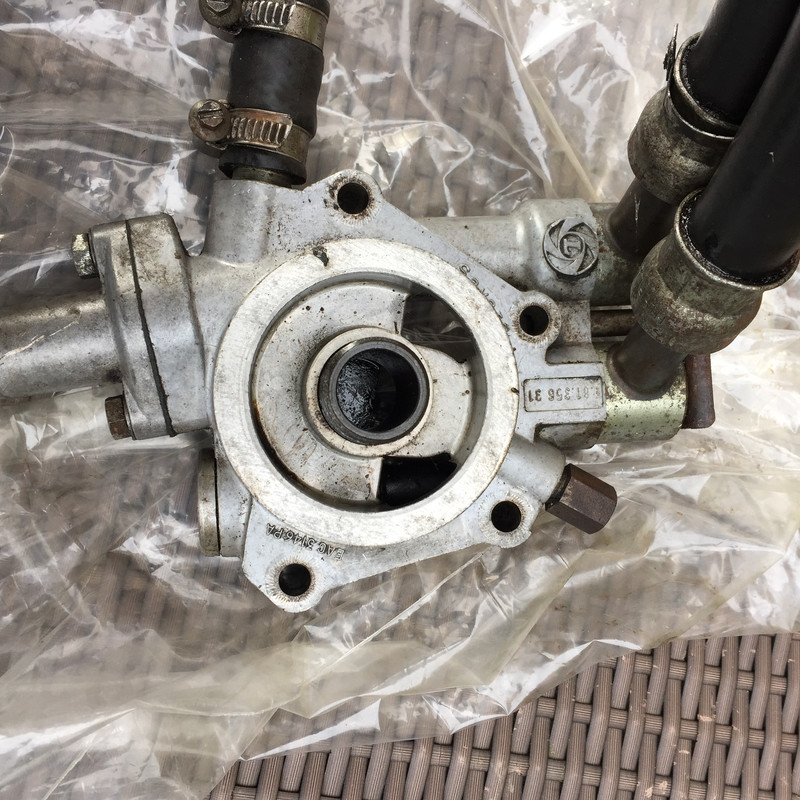 This is the xj6 filter head. I believe it’s a direct replacement for the e-type filter head providing the correct gasket is used. 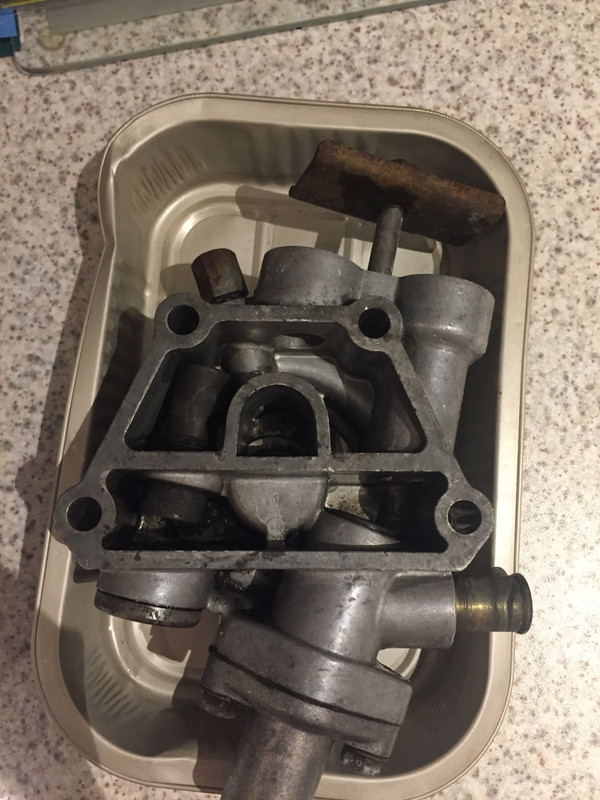 Here’s the back face of the filter head. Here’s how I think it works. High pressure oil from the pump enters into the bottom chamber. From here, it is pumped to the oil cooler, through the spigot to the upper rh of the picture. The oil pressure relief valve is also in this first gallery, so any excess oil is bled off through the stub bottom right, and returns directly to the sump. Cooled oil returns from the cooler into the upper gallery. Between the upper and lower galleries, there is a pressure relief valve. If the cooler gets blocked, this will prevent the engine from being starved of oil. I think it also serves to prevent over cooling. When the oil is cold and thick, more will bypass the cooler. From the upper gallery, oil then flows to the filter and returns to the centre gallery, where it then flows to the engine. On the xj6, the feed for the cams comes from the fitting on the top left. This isn’t needed on the e-type so I’m going to see if the oil pressure sender will fit here. It’s currently fitted to the top of the e-type filter head (s2). There is no provision for a filter bypass valve in the head. This must be internal to the filter itself. One reason I’m going to use a genuine filter with this. 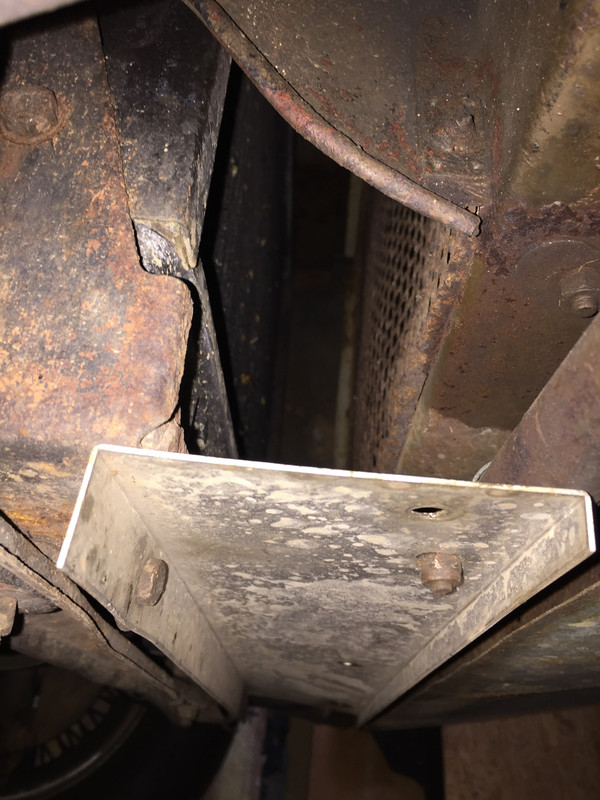 There’s a small gap between the bonnet inner panels and the radiator. I’m going to try and run the cooler hoses through here. I don’t want to cut anything to make this fit. The standard xj6 hoses don’t look long enough, but I will be using them to mock this up and to see what fits in the gap.

by Tom W
The filter head has cleaned up nicely after a few passes through the ultrasonic cleaner. Here’s the oil pressure relief valve stripped and cleaned. The outlet from the bypass points to the back on the xj6 housing, whereas it’s downwards on the E-type housing. Fortunately Rob Beere produces an angled adapter fit to the sump which lines up with the xj6 housing. This is probably the easiest solution, but it does feel like it would be neater if I could work out a way of running the bypass directly down as on the E-type. The stub for the outlet hose to fit into is threaded into the head. Maybe this could be replaced with an angled banjo fitting? 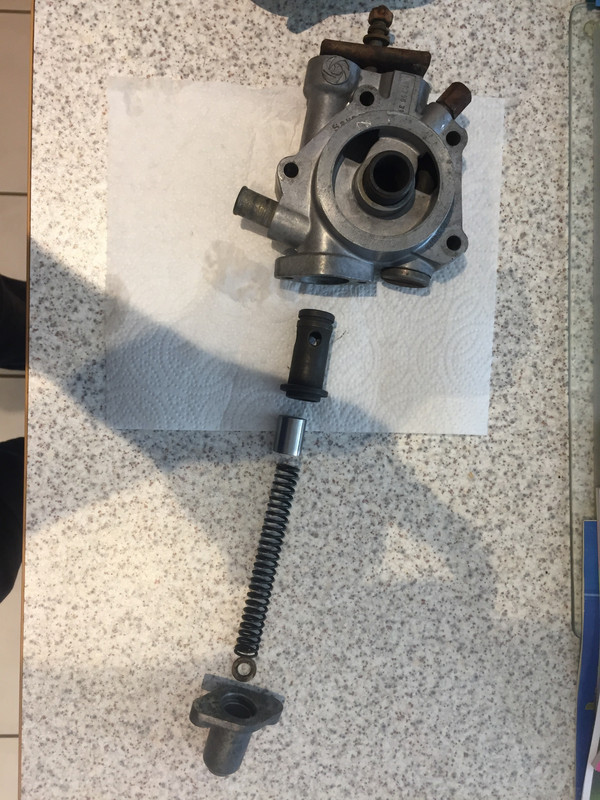 There’s an o-ring missing from the photo, where the valve body fits into the filter head. This was brittle and hard. Probably worth replacing if you buy one of these heads 2nd hand, as any leak here will reduce oil pressure.

I use the S3 oil filter head on some of my rebuilds. I tap the top of the filter head to take unions which then allow for custom oil pipes to feed a standard multirow oil cooler.

The first picture shows the mock up, and the cooler had to be raised to get it in the airflow. 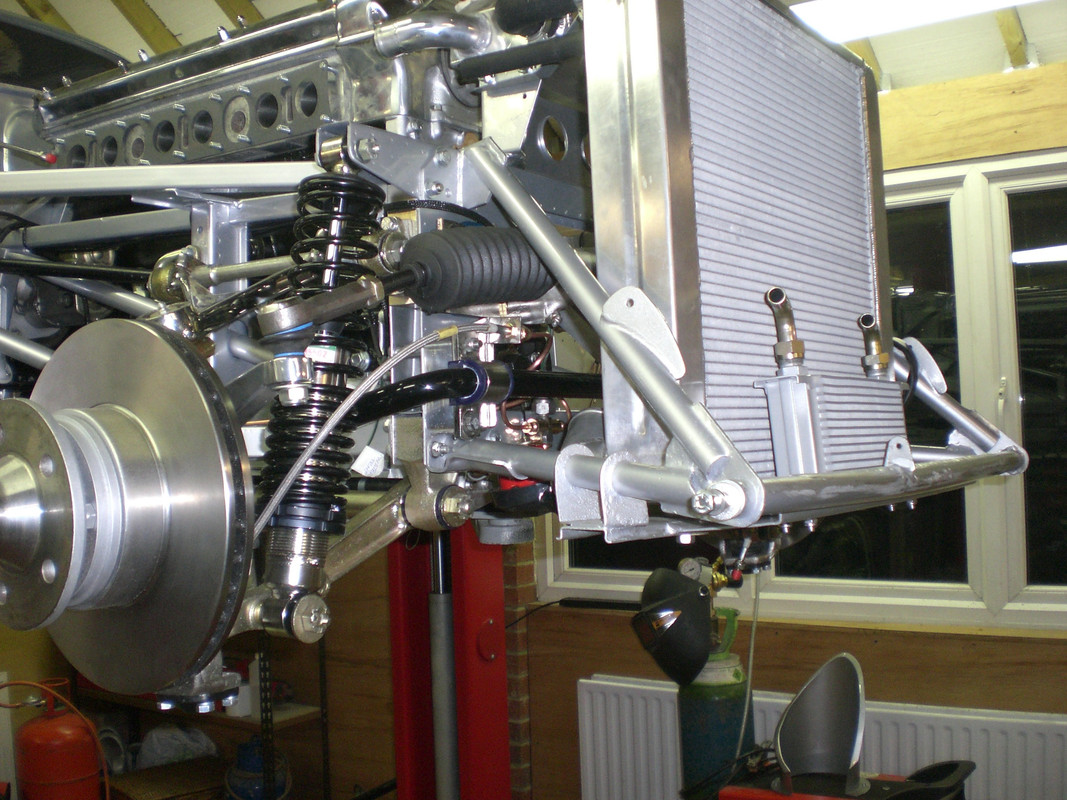 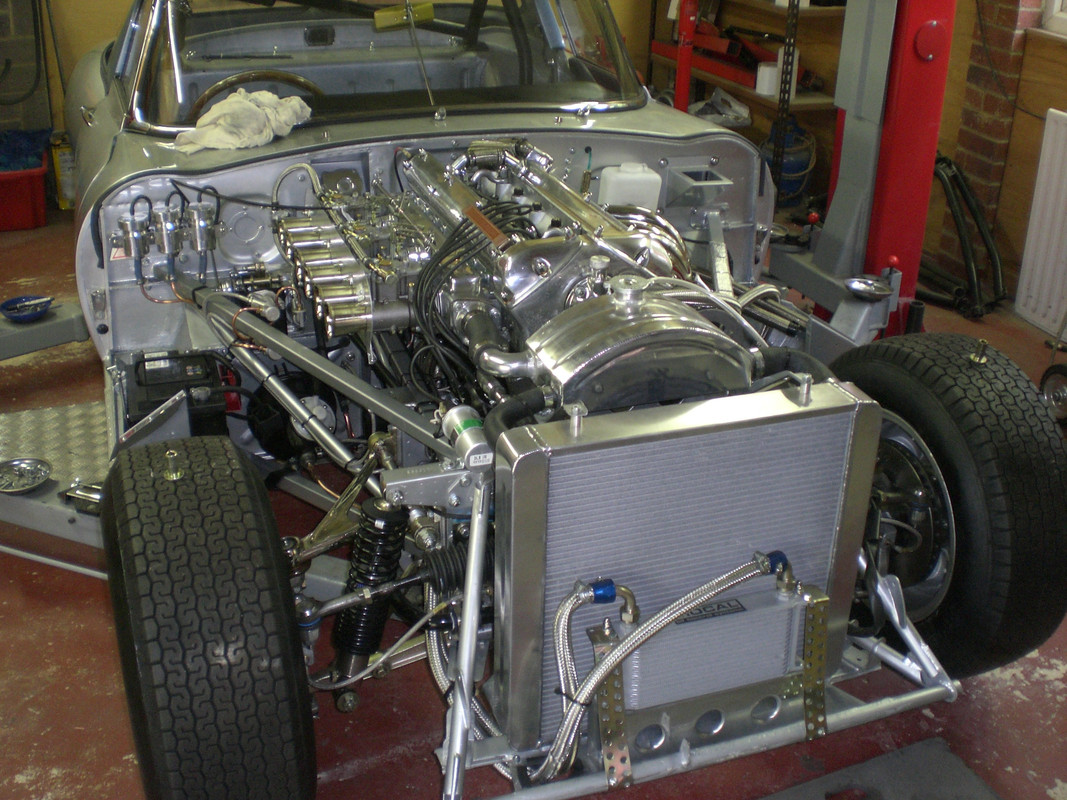 My latest effort for the in progress Low Drag will have the oil cooler tilted out of the flow of air for the rad, having air directed via a scoop. Scoop just visible in this picture. 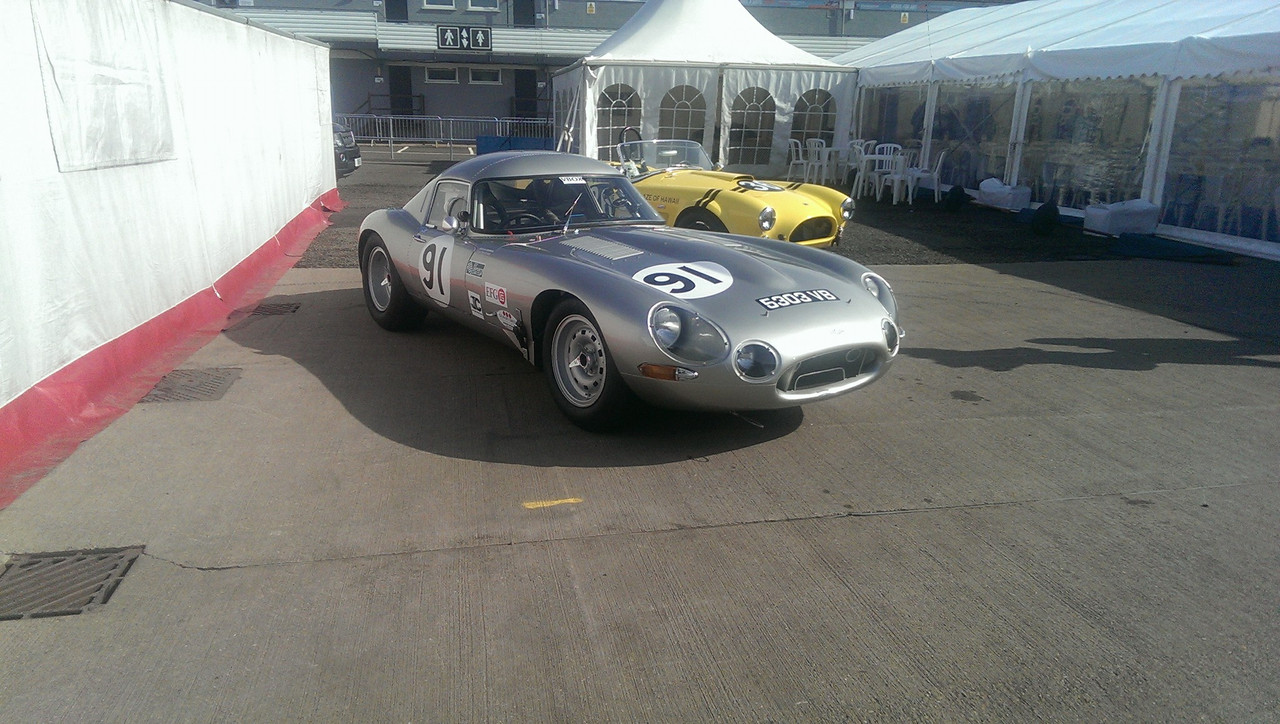 by Tom W
Thanks, that looks very smart.

I’ve tried offering the standard cooler and pipes up to the front of the engine. There’s not enough clearance for the XJ6 steel pipes between the radiator and the bonnet ducting. I could use new bespoke flexible pipes, as others have done. I’m also looking at the possibility mount the cooler vertically so the cooler ports point to the RHS of the car, and the steel pipes exit downwards beneath the radiator, then turn backwards. I can get new flexi hose fitted to the standard pipes at my local hydraulic specialist, which might work out cheaper than buying race car fittings.

A concern I have with fitting the cooler anything other than ports pointing up, is that it might drain back when the engine is off. This could result in a longer than normal time for the engine to build oil pressure, or worse still, the cooler develops an air lock. It could also lead to an artificially high reading on the dipstick, and consequently low oil volume. XJ40s have the cooler mounted with the ports pointing down, so maybe this isn’t a problem? 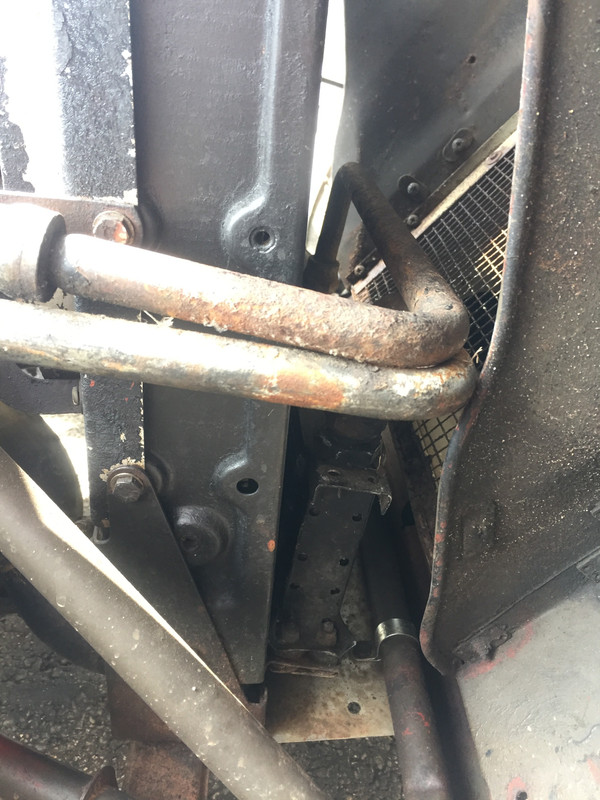 by 288gto
If it's any help this is what I ended up doing.

by phil.dobson@mac.com
could you please explain how or what made you deduce you had 'oil Thinning' ?

by phil.dobson@mac.com
One other comment.... you can try Think Automotive for custom made pipes. I have had good experience with them in the past. its a while since I used them and there are lots alternative companies around now.

by Tom W
Here’s my theory for oil thinning.

My recent journey back from Dover to the midlands involved about 2.5 hours of steady motorway driving at about 70mph. Not much traffic on the road, so we were able to maintain 70 most of the way. The oil pressure was slightly lower than it normally is at 70. Immediately following the sections where the speed was reduced to 50 or 40 for a few miles, the oil pressure was up to its normal level, but would drop again after more sustained driving.

I think the reduced speed gives the oil a chance to cool slightly, or at least pumps less heat into it. The car is due an oil change, and it may be that keeping the oil up at the max level would help, but it feels like the everything’s a bit borderline for shedding heat, though the temp gauge was where it normally was in the centre.

My car has a 3.54 diff at the moment, so the revs are quite high at cruising speed. I have a 2.88 to swap in, so I think the reduced revs would reduce the thermal load into the system.

In all honesty, the marginal cooling is probably symptom of the engine needing properly desludging and rebuilding, but I don’t have the the budget or space to embark on that right now.

Fitting the cooler looks like it will be quite involved so in the meantime I’ll do a oil change with the standard filter. Most of my use of the car doesn’t involve sitting at 70mph for miles, so it’s rarely something I encounter. It would be nice if it didn’t feel so marginal sometimes.

by mgcjag
Speed veriation could well have an effect on the voltage and hence your electric oil guage....unless you have a mechanical guage you really have no idea whats happening to the oil pressure.......great little project if you fit an oil cooler...but in my opinion not needed in a road car..but also fit a mechanical guage....Steve

by Tom W
I don’t think the electrical gauge is very accurate in absolute terms, but it does give an indication of change from the norm. The oil pressure reduction is definitely under bonnet temperature related, rather than purely engine speed related.

I’ve seen the thread on a mechanical gauge, and I used to have one fitted to my old Land Rover, so it’s something I’ll look into.

by Series1 Stu
i can't agree that engine speed variation is likely to have an effect on oil pressure gauge voltage because there would have to be so many things all going wrong simultaneously for that to happen, especially since there's an instrument voltage stabiliser in the circuit. I agree that the gauge is just an indicator of variation, not absolute values (as is a mechanical gauge - its just more accurate in the range we care about).

Yes, the obvious place to start is with an oil change and see what that does. Doesn't cost a fortune and can only make things better as long as its done properly.

An engine condition check might be a good idea, starting with a compression test and a change of coolant and a good flush wouldn't hurt either.

by Tom W
Fitting the cooler at the front of the car looks like it will take some more figuring out, so for the time being, I’ve changed the oil and filter using the standard replaceable element. I’ll see what the effect is next time I do a long journey.

by phil.dobson@mac.com
IMHO a cooler wont fix the issue. and it doesn't sound like there is much of a problem to fix. Although you should take the previous advice and fit a direct reading gauge. I recently had a similar problem in my XK 150 whilst travelling to Belgium. embarrassingly it turned out to be low oil level as I had a leak at the filter assembly :-(

by Tom W
I’ve just been on a long journey and the same effect remains. The car seems to have used a bit of oil over the 380 miles, but it’s still within the hatched zone on the dipstick. It was about 2/3 up the hatching when I started, now it’s on 1/3.

Maybe the car has always done this and I’ve not noticed before? I don’t do long motorway trips every day. Maybe the engine is a bit more worn out than when I got it? Could well be. I’ve done lots of miles and I don’t know it’s history before I got it. I shall stop worrying, and continue with working out the oil cooler conversion whilst using the car as is.

by Heuer
I had an oil cooler - removed it because a) it made no difference to running temperatures and b) it was a point of failure. The latter did not disappoint as it dumped the oil on a German back road. Car was eventually transported to a classic car specialist near Munich but as it was a non standard conversion it took them a day to figure out how to repair it (pipes had to be specially made) so it was off the road for 4 days screwing up our holiday royally. The specialists could not fathom out why the cooler had been fitted in the first place as they reckoned it would make no difference, other than to reliability.

If you are going to continue with this fairly pointless conversion you need to ensure the oil cooler is pressed tightly against the radiator. Any gap will reduce water cooling and you will be worse off than before.
All times are UTC
Page 1 of 1
Powered by phpBB® Forum Software © phpBB Limited
https://www.phpbb.com/