Calling Colin Low, or anyone else that may have the door card removed, or willing to remove it.

Hello Colin,
Do you still have the door cards off of your doors, but with the remainder assembled? If so, please refer to the two following pictures and would you be so kind as to determine which assembly relates to how your Window Regulator is installed. The pictures show the Window Regulators superimposed on the outside of the door to give a better idea of how the assembly's components relate to other parts inside the door. The configuration of the Window Regulator can easily be determined by:

2. Reach inside the door frame near where the bracket with the four threaded studs attached to the door and by feel, determine if the bracket is on the inside of the parallelogram, as shown in the picture immediately following, or on the outside as shown in the second picture below. 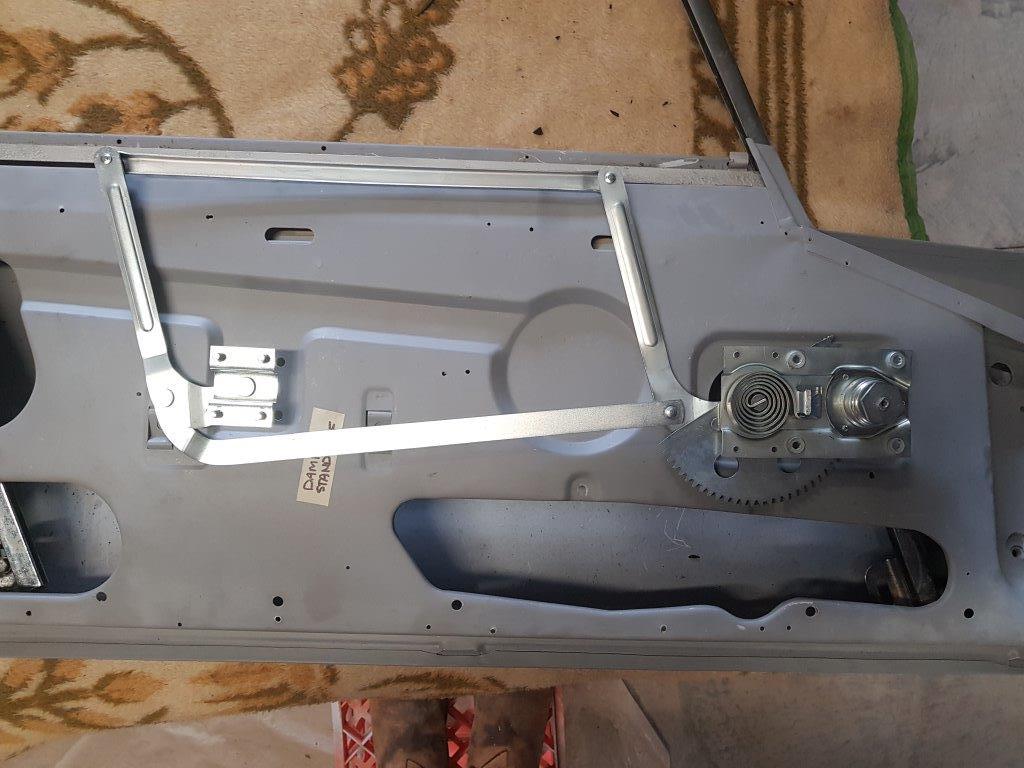 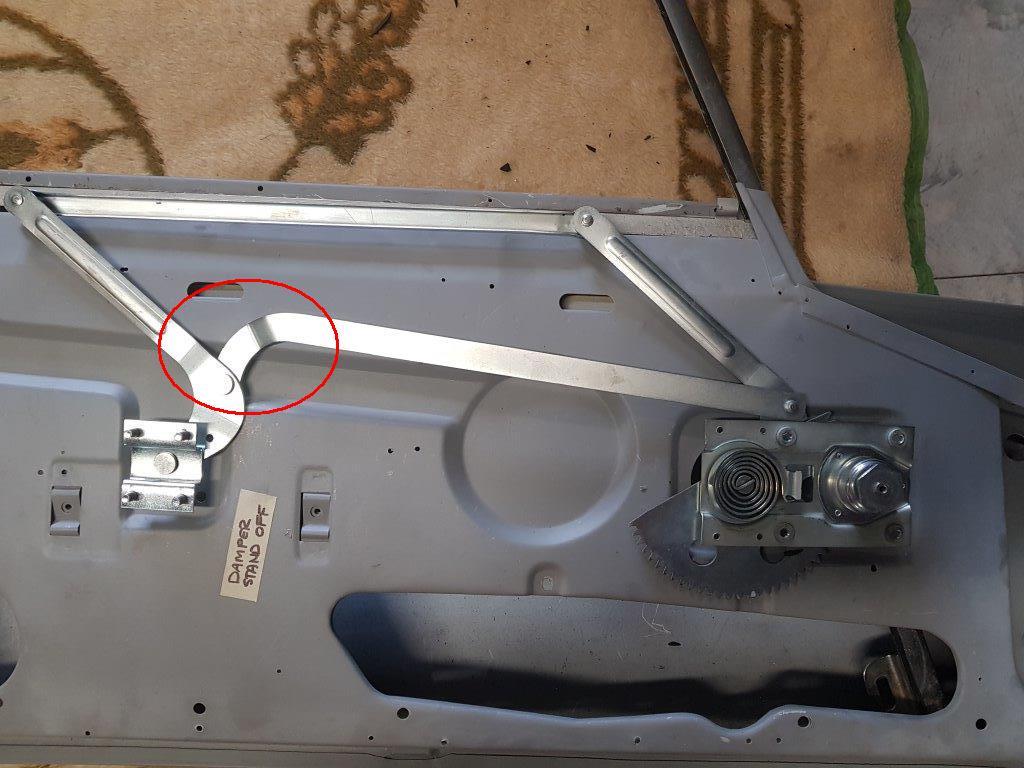 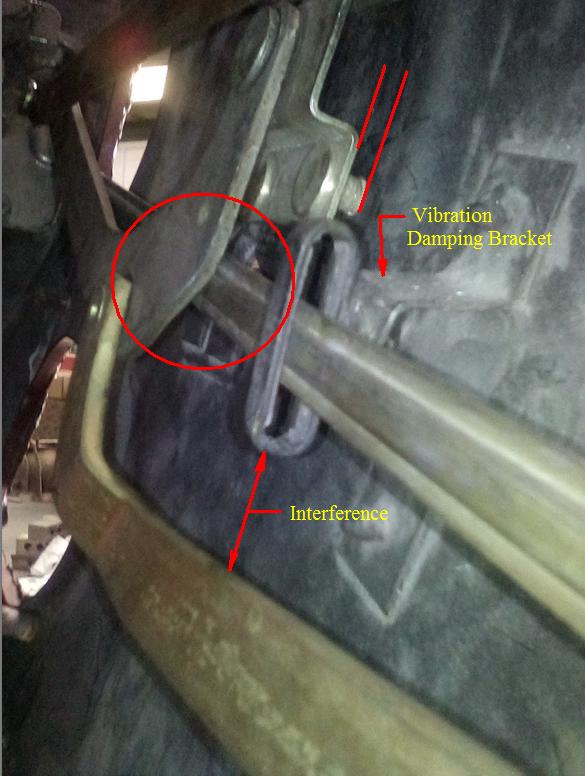 In the picture second from the top, where the Window Regulator is configured with the the four threaded stud bracket on the outside of the parallelogram, the components of the assembly are well clear of the Vibration Damper Bracket, and the area indicated by the Red Ellipse comes no closer to the Vibration Damper Bracket as the Window is wound down.

The very top picture shows a Window Regulator identified as a LH assembly via the Part Number, BD32617 being matched with a LH Door. Its my contention that its impossible to assemble this configuration of Window Regulator in a LH Door due to the interference with the Vibration Damper Bracket and Guide.

S1 2+2 cars are different, because the Inside Door Latch remote bar is on the outside of the door shell and therefore, there is no Vibration Damper Bracket and Guide for the Window Regulator to interfere with. Accordingly, both Window Regulator configurations will work with an S1 2+2.

This is from the Series 3 Parts book. 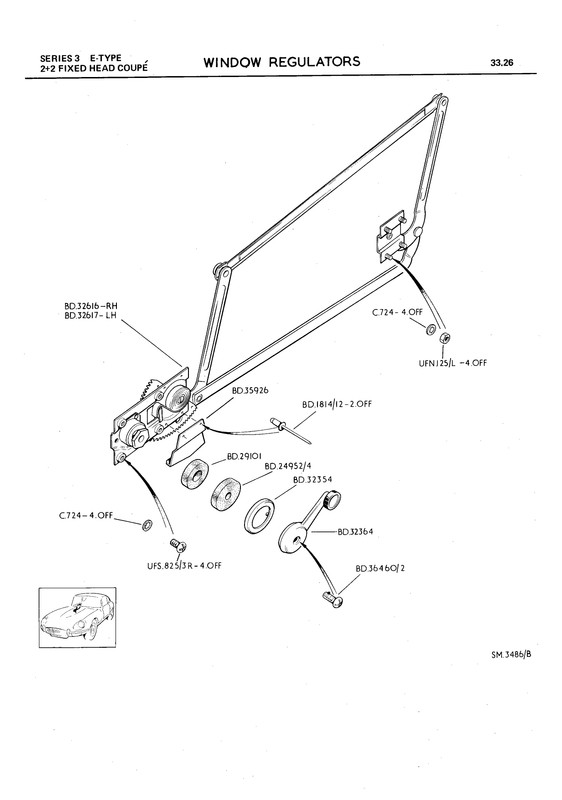 Hello Bill, my LH is exactly as per yr 2nd pic. RH is mirror image 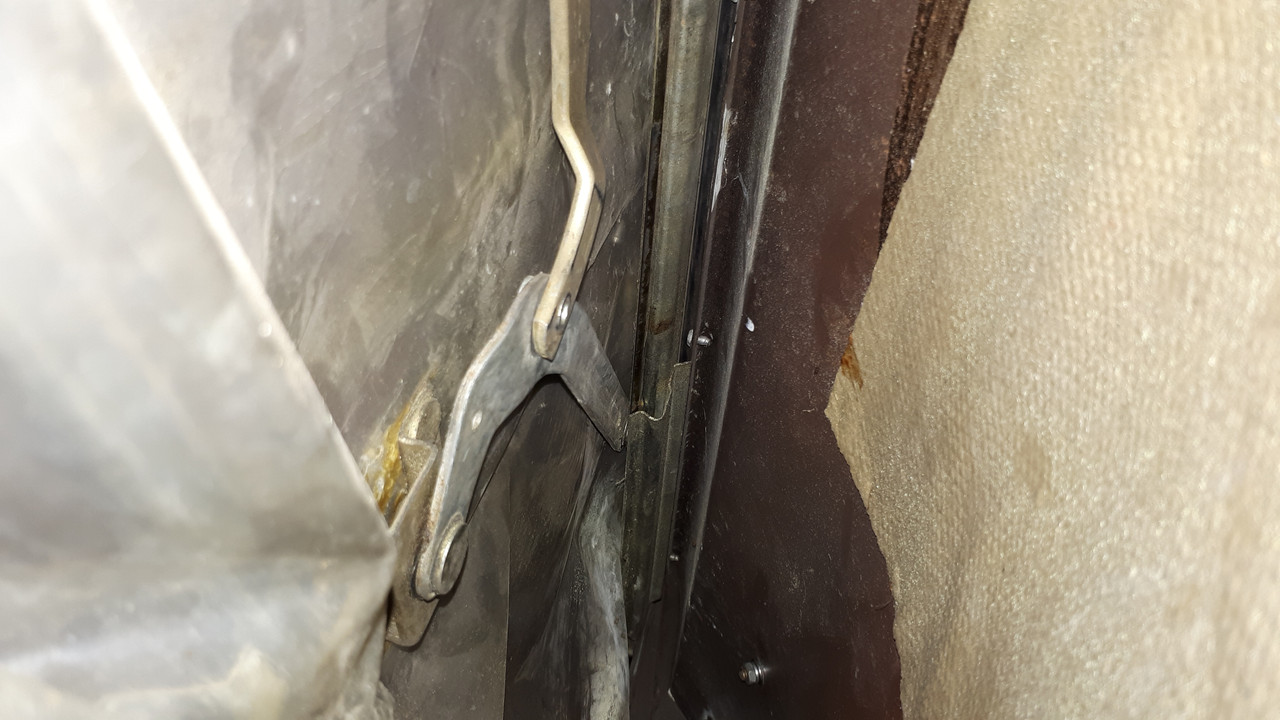 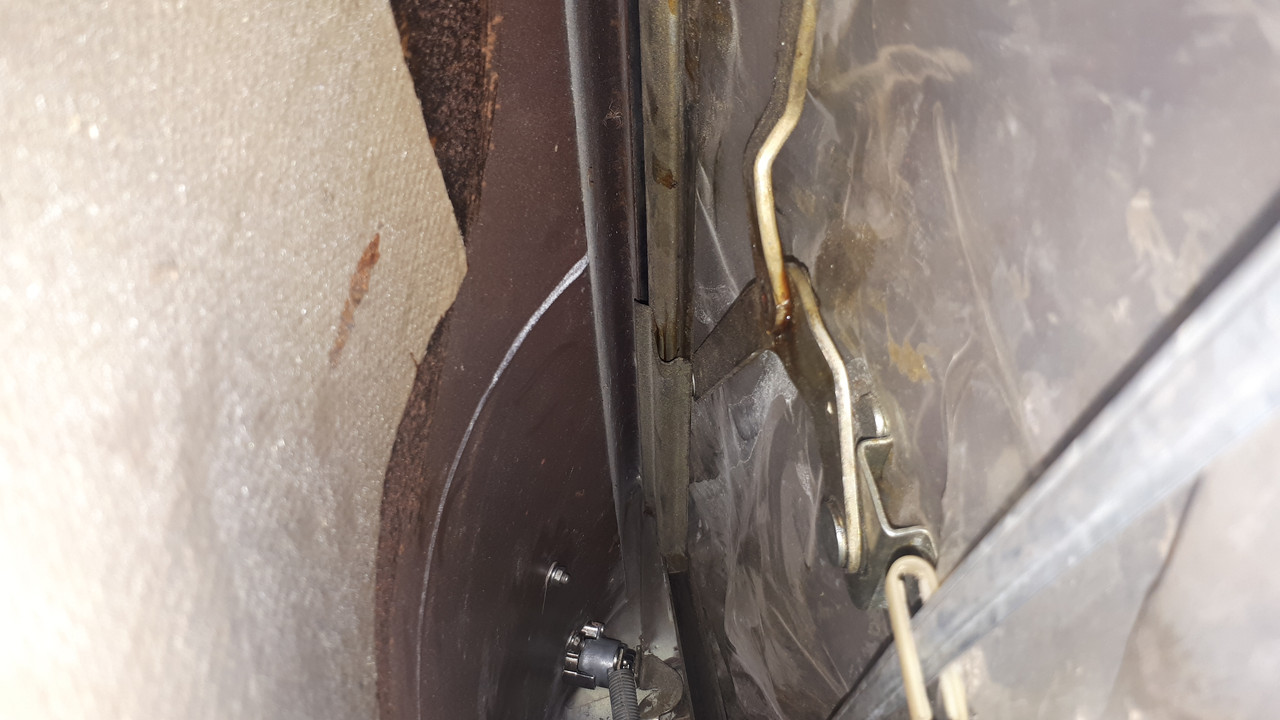 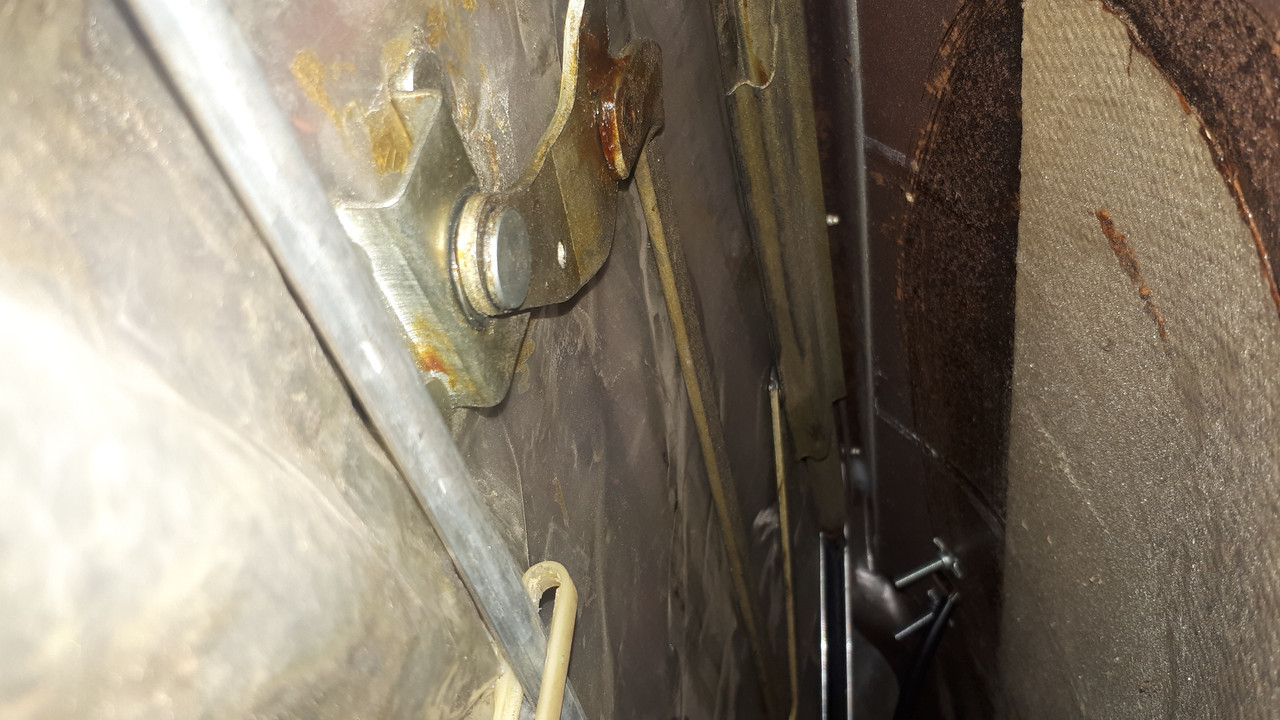 This is from the Series 3 Parts book.

I'm aware of the parts book picture and its wrong.
The following picture is a close up of the winding mechanism extracted from the same page of my copy of the same book you're referring to. 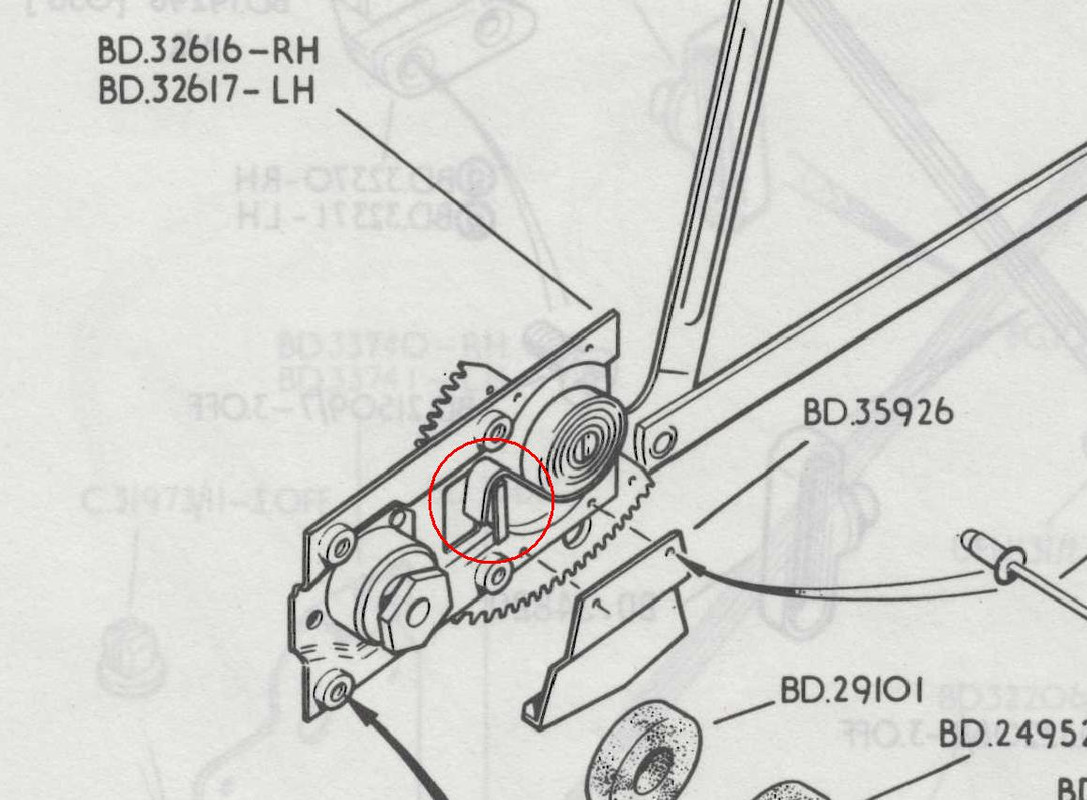 You will note that the tail of the scroll spring is tethered at the Top of the Lug. With this arrangement, the scroll spring will be more tightly scrolled as the window is wound up. This scenario is completely illogical, for the winding mechanism would be fighting both the spring and the weight of the window.

The purpose of the spring is to help compensate for the weight of the window as its wound up and to resist the tendency of the window falling down once it’s been wound up.

In all cases, left and right window regulator assemblies, the tail of the spring should be tethered at the bottom of the lug. In this scenario, the spring is further scrolled as the window is wound down, with the energy stored in the spring assisting in winding the window up and resists the tendency for it to fall down.

If you were to flip the image of the Window Regulator shown in the parts book page you Posted, around its long axis, the tail of the spring would be tethered at the bottom of the lug (where it should be) and it would be a Left Hand assembly in the window down position, also as it should be.

You may say that whoever did the drawing got the spring wrong and drew it upside down. I would go along with that, except for the fact that its impossible to install the Window Regulator as depicted in your picture in a RH door.

Thanks Colin for taking the time to check that out. The configurations of your Window Regulators are the only way they can be installed if the Vibration Damper Brackets have not been removed; and why would anyone do that. The purpose of the Vibration Damper is to stop the remote bar of the internal door latch from rattling, particularly as the door is closed.

Hello All,
I should explain the reason for requesting the check on the configuration of the Window Regulators in LWB S2 and S3 cars.

The part numbers BD32616 and BD32617 are indeed the part numbers for R and and LH Window Regulators respectively and I've seen a NOS BD32616 (RH) unit that still had the British Leyland parts sticker attached. This part was configured the same as that shown in the parts book drawing posted by Rick, except that the tail of the scroll spring was tethered to the bottom of the lug, as it should for a RH assembly.

The problem with purchasing such a part for installation in a RH Door, is that its impossible to fit unless the Vibration Damper Bracket is omitted. Its my opinion, the part designation is a carry over from the S1 2+2, where the remote bar for the internal door latch is on the outside of the door shell and therefore, there is no Vibration Damper Bracket and Guide inside the shell for the Window Regulator to interfere with. Clearly Jaguar identified the issue and all S2 LWB and S3 cars have the Window Regulators installed configured as shown in the 2nd Top picture of my first Post, but they didn't change the parts number specification. Therefore, a BD32617 (LH) part is actually the correct part for a RH door and a BD32616 (RH) correct for a LH door.

Thank you for the detailed explanation of the Car Window Regulator. About a year ago I bought an old Mercedes. I like to do his restoration. After a while, I had to start installing the inner panel on the door, but I noticed that the window lifter mechanism was broken. I'll have to do double work. In addition, I want to install the best baby car sun shade for family so that it is more comfortable to drive in sunny weather in summer. Do you think it's worth fixing a new mechanism or trying to fix an old one? I do not yet know the shops where you can buy this spare part.
Show post links
Top
Post Reply Previous topicNext topic
6 posts • Page 1 of 1