Hello S3 Owners,
I've restored quite a few S3 E Types over the years; accordingly, I've handled each and every part of these cars many times and as a result, there aren't many, if at all any, parts I couldn't say exactly where they assemble.

Recently I was looking in an S3 Parts Catalogue for the part number of a particular parts of the front suspension, when I noticed that part number C15376, is shown as existing at each end of the fulcrum shaft and 4 off are required for the assembly of both wishbones. (see the washers indicated in the following picture) 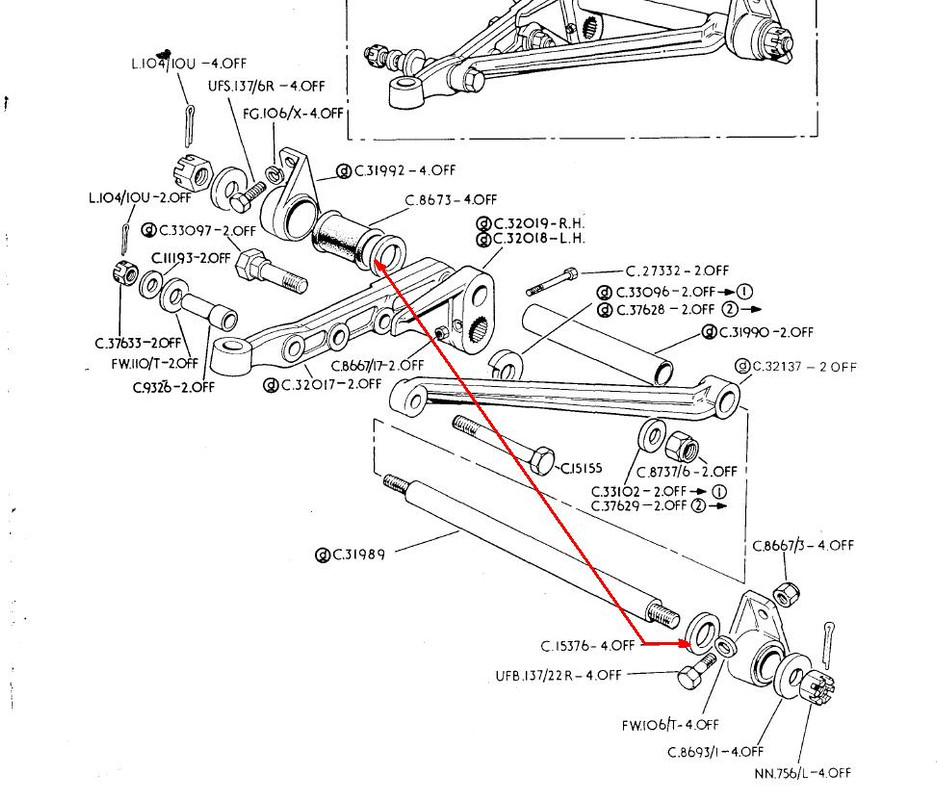 Of all the S3 cars I've laid a spanner on, I've not seen a single car that has the forward washer included in the assembly.

When the nut at each end of the shaft is fully tightened, all components, excluding the Rubber Bush Housing, are drawn up firm with each other and therefore, any addition or omission of parts inboard of the rubber bushes will affect the pitch between the two Rubber Bush Housings.

Notwithstanding that I've handled many of the Lower Wishbone assemblies and I'm firmly of the opinion that the Parts schematic is wrong, I would appreciate owners of S3 cars to look at the Front Rubber Bush Housing of the Lower Wishbone and report if your cars have a 3mm thick washer (or any washer) between the inboard end of the Rubber Bush and the Lower Wishbone Lever face (part number C32017). No dismantling is requited for this examination, just lift the bonnet and eyeball the area of my interest.

#2 Re: S3 Parts Catalogue and the Front Suspension

Dear Bill,
mine also has just the two, not the four pictured.

Perhaps the original rubber bushings at the time the technical drawings were done were 1.5mm shorter, or were made from a softer rubber that incrementally squished up a similar amount or the originally envisaged washers were 1.5mm thick not 3mm. I'm not familiar with subsequent technical service bulletins but one may contain errata or a clarification.

#3 Re: S3 Parts Catalogue and the Front Suspension

Perhaps the original rubber bushings at the time the technical drawings were done were 1.5mm shorter, or were made from a softer rubber that incrementally squished up a similar amount or the originally envisaged washers were 1.5mm thick not 3mm. I'm not familiar with subsequent technical service bulletins but one may contain errata or a clarification.

Hello Marek,
Thank you for your reply.

The thickness of the Washer/Spacer is governed by the length of the steel bush inside the rubber; accordingly, the softness of the rubber is irrelevant. Therefore, it could have been that the overall length of the rubber bush, including the inner, steel bush may have been 1.5mm shorter at the beginning, but I don't believe so. The reason for this belief is that I have a very early S3 car in work that is totally unmolested; everything about this car is as it left the factory except degraded due to the passage of time. This car is as all others I've encountered, with just the one inner spacer per side.

I know of other errors in the Parts Catalogue, the window winder assembly being one that springs to mind, so I suspect that this is just another error. Although the parts catalogue is a good resource for those reassembling their cars, it just shows that the schematics cant be taken for granted as being correct and pictures during disassembly are a safer alternative.

I note also that, given that the configuration and dimensions of the S1/S2 car's Lower Wishbone is similar to that of the S3, no second, inner Washer/Spacer is shown in the parts catalogue for the S1/S2 models.

Having discovered this difference between Parts Catalogue and actual, I think a Washer at each end would have been better, for on many examples I've looked at recently, there is consistent damage to the flange of the rubber bush in the area where the Lower Wishbone Lever extends out past the circumference of the Rubber Bush to the Stub Axle Carrier. However, I don't think two 1.5mm washers is the answer as:

2. !.5mm is only 0.5mm (0.020") thicker than the sheet metal used in the body panels of the car and I suspect that the force from the compression of the rubber bush may deform a 1.5mm washer. I'm certain that a 20g washer would deform.

#4 Re: S3 Parts Catalogue and the Front Suspension

That all sounds perfectly sensible.
It also looks to me like caster angle would be impacted if this were arbitarily altered.
The torsion bar might also want to change length.

#5 Re: S3 Parts Catalogue and the Front Suspension

My unmolested original also had only the
rear washers. These are thrust washers, hence 3 mm.
The front washers protect the bush, prevent the damage you describe. The inner bore of the bush is fixed to the wishbone, the outer is fixed to the frame, there are no sliding surfaces, suspension travel is with distortion of the internal rubber as the inner and outer surfaces rotate relative to each other. The design of the wishbone is with a sculptured indent adjacent to the bush housing. Without a front washer the flange of the bush gets captured, becomes "keyed" to the wishbone. So you have the outside of the body of the bush clamped to the frame and the outside of the flange keyed to the wishbone so net result, suspension movement shears off the flanges - duh.
My solution was to make 1.5 mm washers, by boring out bearing plates removed from old upper wishbone bearings, these hard, strong, chrome plated, excellent for purpose.
I also changed from rubber to polyurethane bushes. If you do this, needs to be with eyes wide open. Poly bushes work completely differently to rubber bushes.Rubber bushes distort, do not have sliding surfaces. Poly bushes don"t distort, they have/require sliding surfaces and lubricant. Also different compressibility so length should be different. And if you fit poly bushes, front washers become even more essential.
I did all this year's ago, had to to get roadworthy, inspector, noted the sheared off flanges on the rubber bushes, put it on his knock list. At the time OEM spec replacements were not available so I purchased poly bush upgrade kit from SNGB, turned out to be incompatible. Eventually found properly engineered poly bushes that fit and work with the 1.5 mm bearing washers as above.
Regards,
ColinL
'72 OTS manual V12
Show post links
Top

#6 Re: S3 Parts Catalogue and the Front Suspension

Hello Colin,
This issue with the Parts Catalogue came to light due to fitting Poly bushes, supplied by the client, to the client's car. This set came from XK Unlimited (when the company was still XK Unlimited).

I'm not sure if they're the same as those sold by SNGB, but length dimension when assembled is such that there is circa 0.25mm end preload on each bush when the castellated nut at each end of the fulcrum shaft is tightened, to result in a solid column which includes the front, outer washer, the steel liner of the front Poly Bush, the Lower Wishbone Lever, the tube spacer, the diagonal brace of the Wishbone, the inner rear washer (3mm), the steel liner of the rear Poly Bush, the rear, outer washer and of course, the fulcrum shaft.

#7 Re: S3 Parts Catalogue and the Front Suspension

My S3 was built at the end of November 1971 and also has only one washer per side. 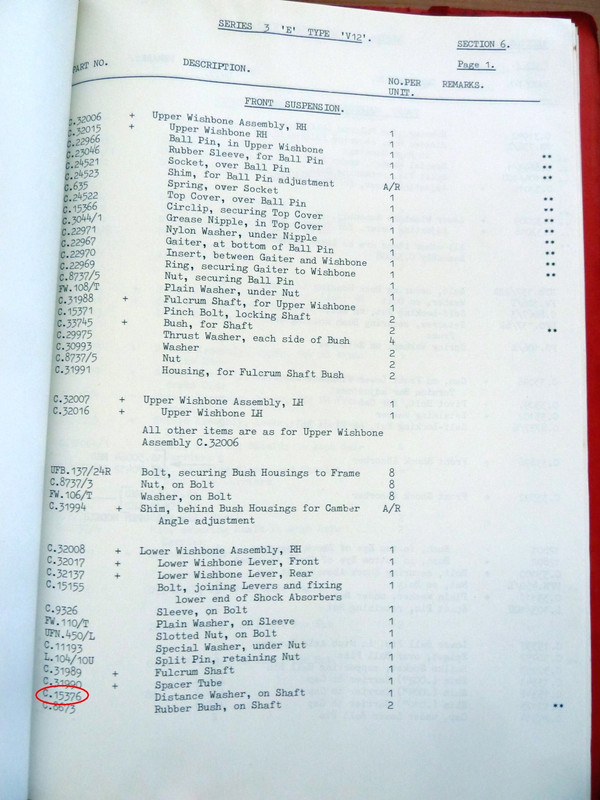 But what I think is the first "Illustrated Parts Catalogue Publication No. PC1" (Oct 1972), shows the additional washer with a quantity of 2. Quantities for most items here are given for one wishbone, but some are for two. 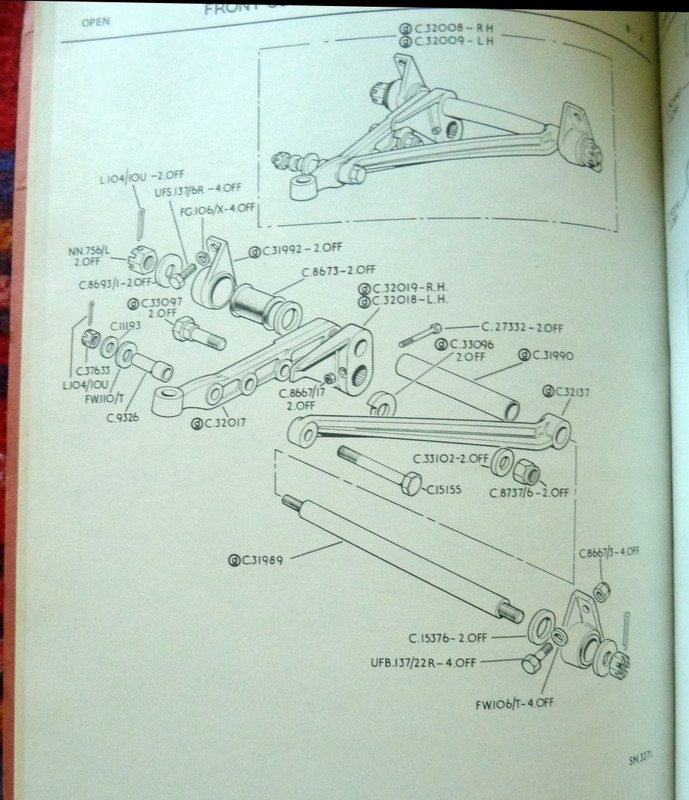 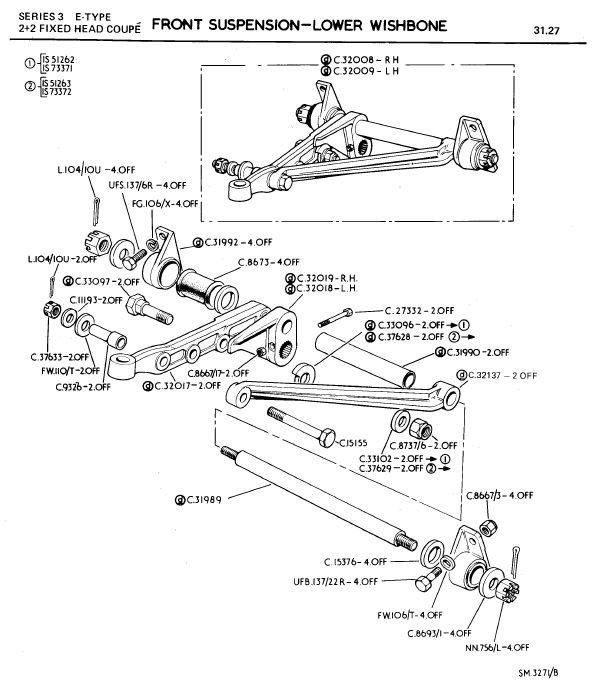 Since the part numbers of items which set the distance between the fulcrum shaft housings didn't change
throughout production I don't think we will solve the mystery of the additional washer and quantities in the images.
Bob
'71 S3
Show post links
Top
Post Reply Previous topicNext topic
7 posts • Page 1 of 1